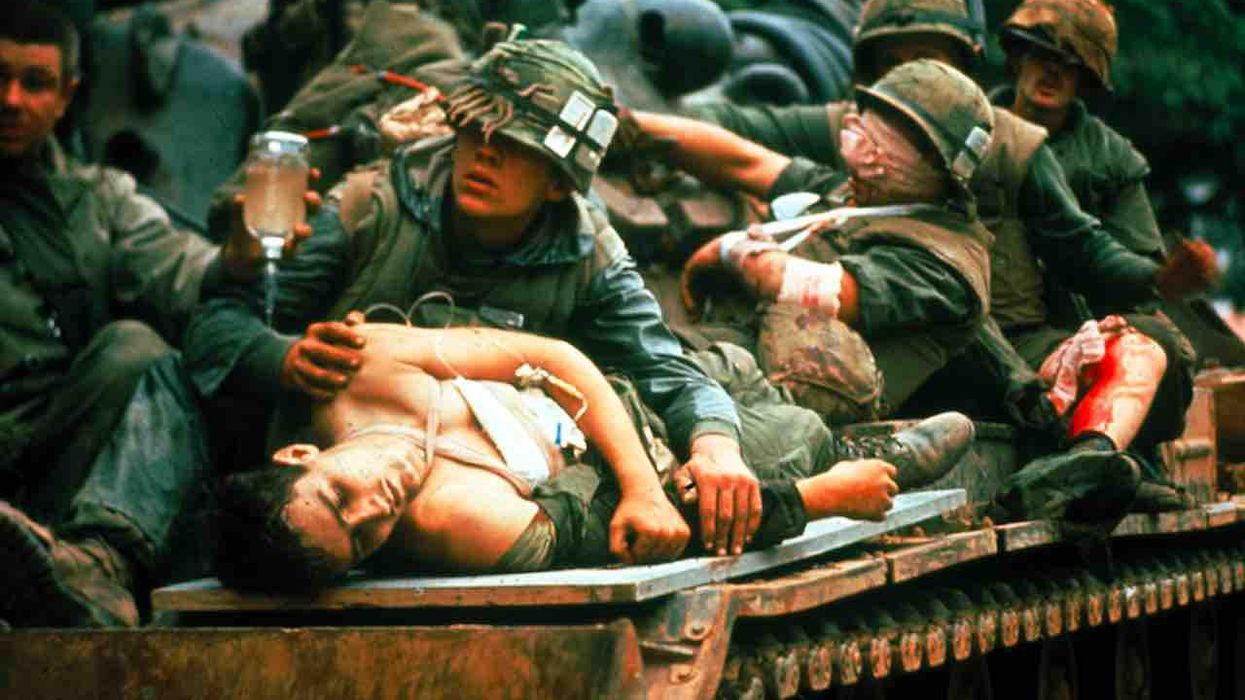 The reviewer, Chris Lehmann, heaps praise upon Joseph Darda’s tome, “How White Men Won the Culture Wars: A History of Veteran America,” calling it “eye-opening” and an “original and persuasive revisionist study.”

Lehmann also gleefully declares that when it comes to “cancel culture, wokeness, and the like,” the “loudest and most visible partisans in these battles are aggrieved white men, insisting that they’re scapegoats in unhinged identity-driven witch hunts and eagerly putting themselves forward as martyrs in ugly confrontations over free speech.”

The central argument is that beginning with the Vietnam War “aggrieved” white men have been playing “a discriminated-against minority” — and among the pop-culture examples is Sylvester Stallone’s John Rambo character, particularly in 1985’s “Rambo: First Blood Part 2” in which the “aggrieved” Vietnam veteran issues bloody payback against all of his overseas opponents.

Here’s how Lehmann puts it:

Stallone’s title character is dispatched back to Vietnam on a POW rescue mission and delivers his signature catchphrase in reply to the officer briefing him: “Sir, do we get to win this time?” The movie script also goes out of its way to give the character of Rambo a new ethnic identity that hadn’t been referenced in the franchise’s debut film or in the novel that formed the basis of the Rambo series: He’s made half-Native American. As Darda notes, Rambo’s manufactured Indigenous backstory gave a character played by a white actor a way to co-opt a narrative of discrimination: “The white ethnic revival had made white minorities the most American thing of all.… In the 1980s, that meant a white actor starring as a half-Indian soldier—a minoritization that, as simulated rather than embodied, allowed all white men to see themselves reflected in it.”

In the aftermath, New Republic posted a tweet Wednesday noting Lehmann’s “The White Men Who Wanted to Be Victims” review — and the backlash and ratio-ing has been severe so far. As of Thursday afternoon, the tweet has attracted 964 comments compared to only 42 likes.

Here’s what some of the commenters had to say to Lehmann — and in fairness likely to Darda and the New Republic: 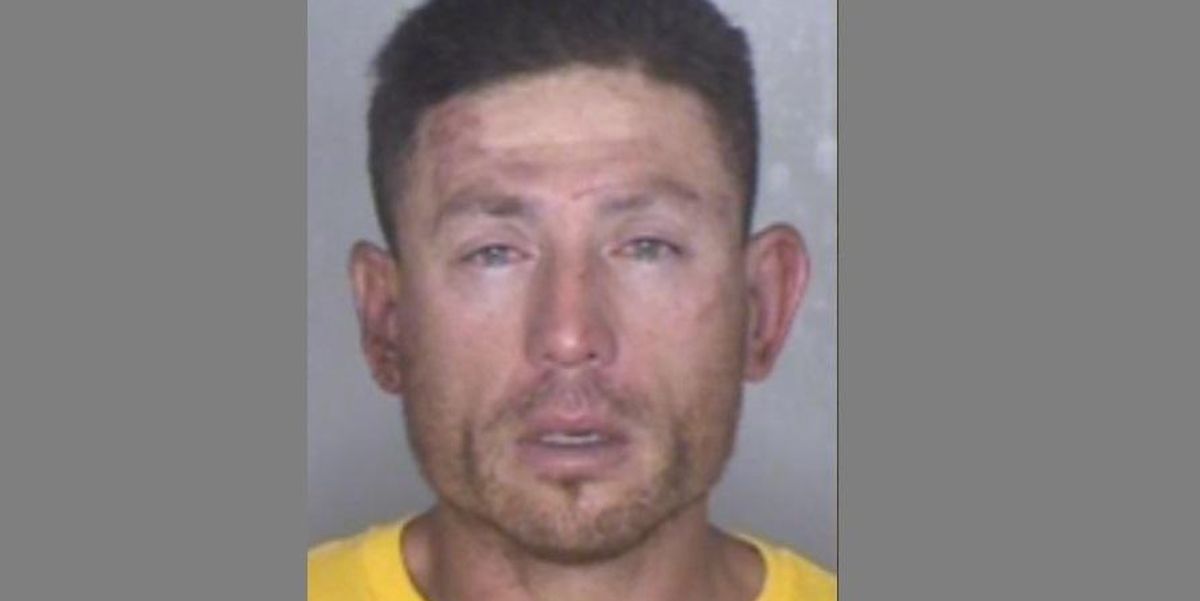 A California tree trimmer already behind bars for attempting to kill someone has been charged with multiple murder counts and dubbed a “serial killer.”

Authorities say after the suspect was apprehended by a SWAT team last year who found him allegedly trying to kill a man, they were able to link him to the deaths of several people.

Ryan Scott Blinston, 37, has been charged with three murders, two attempted murders, and other charges after authorities linked him to a spate of victims spanning two counties whose throats had been slashed.

The Associated Press reported that Blinston worked for a tree trimming service in northern California in May and June of 2020. Authorities believe that during his stint at the company, Blinston returned to the homes of clients after work was completed and slashed their throats.

The Butte County District Attorney‘s office referred to Blinston as an “alleged serial killer,” saying that a multi-agency investigation found that he was tied to multiple deaths during his tenure with the tree service.

The first victims were Loreen Severs, 88, and her husband Homer Severs, 91, whose throats were both slashed in their home on May 23 — days after hiring the tree service where Blinston worked. Loreen died in the attack, but Homer survived only to die months later of an illness.

Another client of the tree trimming service, Sandra George, 82, was found dead with her throat slashed after Blinson allegedly returned to her home on June 4 after the job was complete and the rest of the crew left.

The next victim was Vicky Cline, 57, an acquaintance of Blinston’s who was last seen with him on June 6. That night, Cline’s car was destroyed in an arson fire, and DNA evidence links Blinston to the vehicle. Cline’s body was discovered in a river a few weeks later, with her throat slashed.

Then on June 14, the Butte County Sheriff’s SWAT team showed up at the home of a 50-year-old man whose identity was not released.

The 50-year-old man was flown by helicopter to a hospital, and he survived the attack.

Fox News reported that Blinston was charged Thursday, and if found guilty, he faces life without parole. 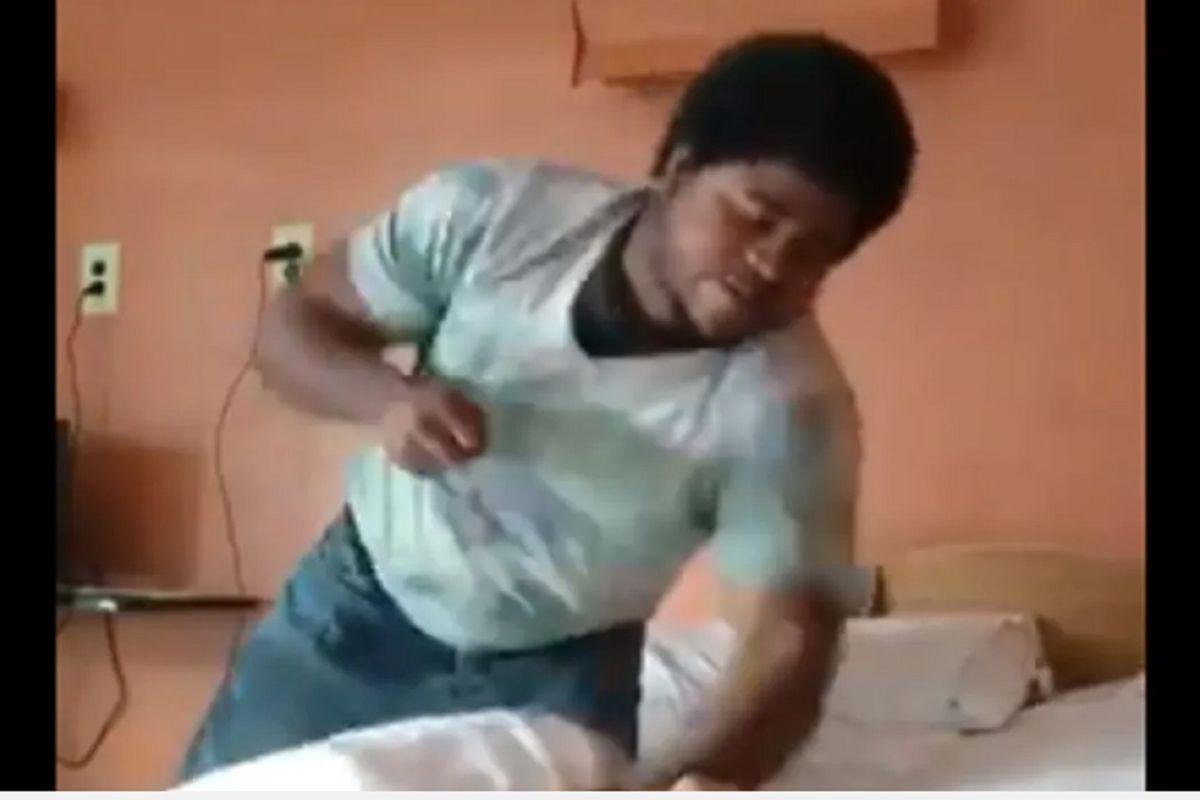 The elderly nursing home resident who was shown being beaten in his room in a video that went viral two months ago has died, his family confirmed this week.

In late May, horrifying footage of a young person beating a helpless elderly person began circulation online, and the disturbing nature of the video sparked widespread outcry and an investigation. It even grabbed the attention of President Donald Trump, who tweeted, “Is this even possible to believe? Can this be for real? Where is this nursing home, how is the victim doing?”

The victim was identified as 75-year-old Norman Bledsoe, a resident at the Westwood Rehabilitation Nursing Center in Detroit. Shortly after video of the attack went viral, Bledsoe’s roommate at the facility, 20-year-old Jaden Hayden, was arrested in connection with the beating.

Authorities said at the time that Bledsoe was hospitalized for “non-life-threatening” injuries.

The victim’s nephew, Kevin Bledsoe, told the outlet of his uncle, “His eating habits went downhill after (the alleged assault on May 15), and he lost quite a bit of weight.” Kevin Bledsoe noted that the family had been prohibiting from visiting Norman Bledsoe at the nursing home following his release from the hospital, due to COVID-19 restrictions.

“We finally were able to see him last week,” Kevin said. “He wasn’t doing very good. I guess there just wasn’t anything else they could do for him.”

The Bledsoe family is reportedly moving forward with a lawsuit against Westwood.

Hayden is accused of not only recording himself beating up Bledsoe, but posting the footage online and stealing the elderly man’s credit card following the attack. The accused reportedly has mental issues, and is due in court Thursday to determine whether he’s mentally fit to stand trial.

WJBK-TV pointed out that the 20-year-old was placed in the long term care facility after being diagnosed with COVID-19 due to Michigan Gov. Gretchen Whitmer’s (D) controversial policy of sending coronavirus patients “to nursing homes as a way to isolate them from the rest of the state to avoid spreading the virus further.” 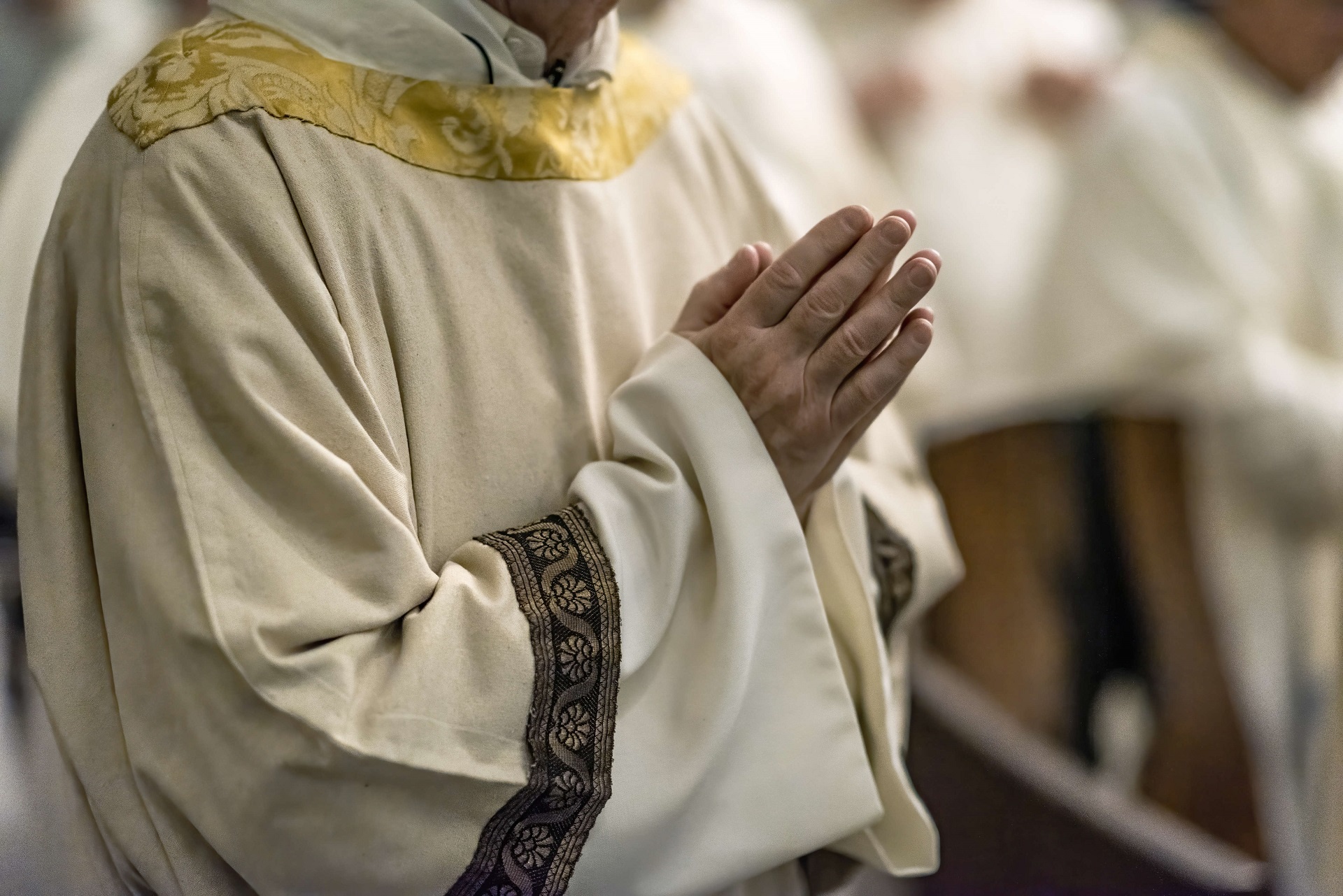 The Catholic Diocese of Erie in Pennsylvania has suspended its compensation fund for the victims of sexual abuse suffered at the hands of their clergy for “at least 90 days,” saying their investments took a hit from the coronavirus market downturn.

The diocese — which NPR noted was “identified in 2018 by the state attorney general as one of the places where clergy abuse had been especially egregious” — wrote in a press release, “As a result of the economic turmoil caused by the onset of COVID-19, the Diocese of Erie has temporarily suspended its work with the Independent Survivors’ Reparation Program effective March 20, 2020,” The Herald reported.

The press released said that “the suspension will last at least 90 days.”

According to the Erie Times-News, the Catholic Diocese of Erie created the fund last year to pay compensation to its victims, and has since “paid out about $6 million in claims to at least 50 victims or survivors.” The diocese said that roughly 40 claims remain unresolved, and those are the claims that have been put on hold.

As of Feb. 19, the outlet pointed out, the diocese reported that its finances were strained “but they remained solvent.”

The Survivors Network of those Abused by Priests, a U.S.-based organization, condemned the Erie Diocese’s decision in a statement, saying, “This is a hurtful and deceitful move that clearly shows that the best pathway for survivors to get justice is through the court system and not church-run programs.”

S.N.A.P. added, “If a diocese is going to operate a compensation program, then they should ensure that they are running these programs properly. Every single bishop who is currently offering such a program should immediately set aside and protect the money that has been promised to those who experienced sexual abuse at the hands of diocesan employees. To do otherwise is to continue the Church tradition of false promises for those who have suffered from clergy abuse.”

In 2018, Pennsylvania Attorney General Josh Shapiro (D) released an 884-page report from a two-year investigation conducted by his office, revealing the covered-up abuses of thousands of children at the hands of Roman Catholic priests in the state over a span of 70 years. The details reported by Reuters are graphic and horrific.

At the time, Erie Diocese Bishop Lawrence Persico — who remains in his position there — said, “The grand jury has challenged us as a Catholic diocese to put victims first and to continue to improve ways to protect children and youth.” 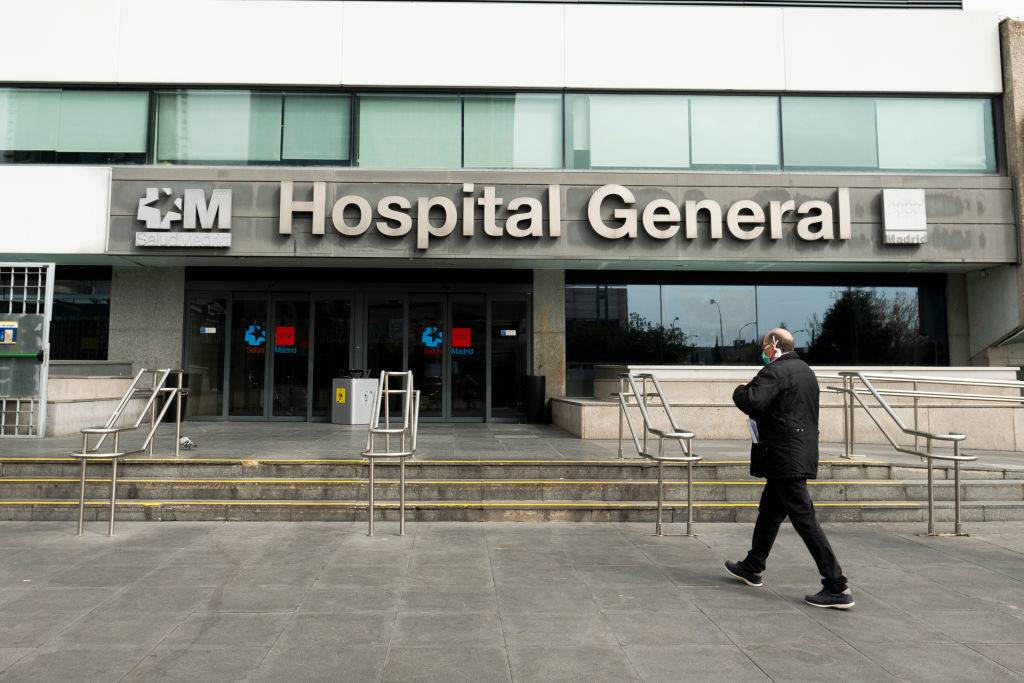 A 20-year-old from Spain who recently died after contracting the coronavirus was allegedly sent home and told not to worry by doctors less than a week before the disease killed him.

Francisco Garcia, a youth soccer coach at Malaga club Atletico Portada Alta, initially thought he had the common cold when he went he first became ill on March 6, his family told the Sun in a recent interview.

“He had a sore throat but he didn’t have a temperature,” Garcia’s stepdad, Juan Fernandez, said. “He spent the weekend resting at home on the sofa and watching TV.”

Three days later, when Garcia still wasn’t recovering from the illness, Fernandez took him to a doctor who then allegedly told him to “take paracetamol [acetaminophen] and sent him home and said there was no need to worry.”

When his health deteriorated again overnight, Garcia’s family decided to take him to another doctor for a second opinion. That doctor sent him home again — this time with antibiotics.

“We didn’t think anything was really wrong and nor did they then,” Fernandez recalled. “But by the next day he couldn’t stand up properly and he had a fever.”

At that point, the family knew it was serious, and they quickly drove him to a local hospital where Garcia was admitted and “immediately and put him on a ventilator.”

That was the last time Garcia’s family saw him.

Once at the hospital, he was diagnosed with pneumonia and was placed under a quarantine due to suspicion that he had contracted the coronavirus. The following day, he tested positive for COVID-19 as well as leukemia. Four days later he died.

“It was so much to take in,” Fernandez said, recalling that Garcia never complained about health problems. “We knew coronavirus was killing people — but we never thought it would kill Francis.

“He was taken to the cemetery without us being able to say goodbye to him,” Fernandez added, speaking for Garcia’s mother, Irene, who the Sun reported was too devastated to talk.

“We can’t get our heads around what’s happened,” he continued. “A fortnight ago we were a normal family … now I’m stuck indoors with my wife and my mother-in-law, grieving and worrying if we’ve all got coronavirus too.”

According to the Independent, infectious disease experts said that had Garcia not been suffering from leukemia, he likely would have survived the disease. Garcia is one of the youngest victims of the novel respiratory disease, as most of the victims are elderly.