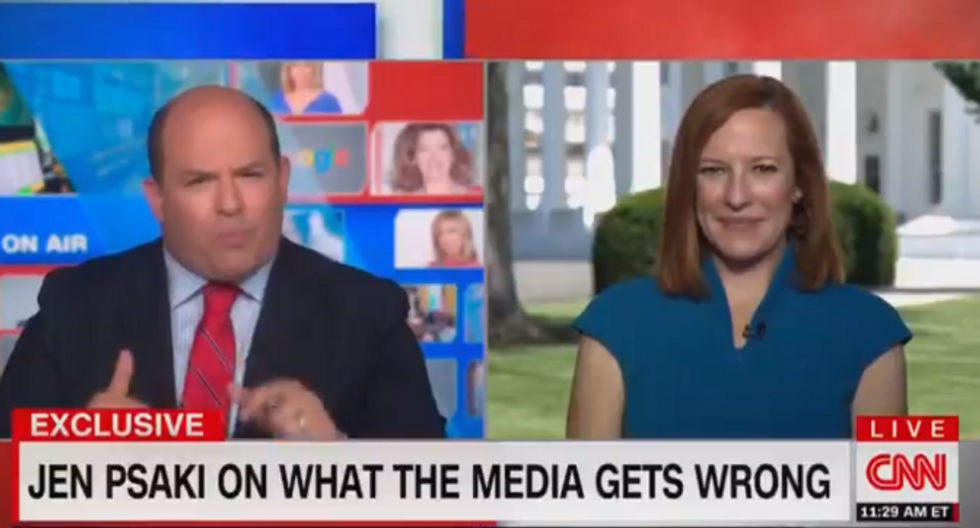 CNN host Brian Stelter was ridiculed online for a softball question to White House press secretary Jen Psaki that some labeled as “propaganda” and bootlicking.”

During CNN’s “Reliable Sources” talk show that aired on Sunday, Stelter asked Psaki, “What does the press get wrong when covering Biden’s agenda? When you watch the news, when you read the news, what do you think we get wrong?”

Psaki responded to the unchallenging question, “Look, I think some of our muscles have atrophied a little bit over the last few years, and there isn’t a lot of recent memory on how long it takes to get legislation forward, or how messy the process of negotiating and the process of getting legislation across the finish line can be.”

The amicable and favorable question by the friendly press was slammed on Twitter.

Conservative blogger Erik Soderstrom sounded off, “What a subservient, obsequious question for anyone in media to be earnestly asking the President’s mouthpiece. @brianstelter can’t wait to grovel before Democrats when he wakes up in the morning.”

Senior editor at The Federalist Mollie Hemingway tweeted, “Our corrupt media are absolutely nothing more than propagandists and should be treated as such.”

Senate Minority Leader Mitch McConnell’s former grassroots director, Nicholas Sandmann, noted, “Media during Trump couldn’t say enough about how wrong everything he did was. Media under Biden can’t think of anything to even question in his administration.”

Conservative commentator Stephen L. Miller mocked Stelter by saying, “‘How can we do a better job of sucking up to you?'”

“The News and Why It Matters” host Sara Gonzales mocked Stelter’s lack of journalistic integrity with a meme from “The Simpsons.”

Also from the same fawning interview, Stelter attempted to bond with Psaki based on them both being parents of young children, asking her if she fears for their children when they grow up considering the “craziness we’re seeing from the GOP.” Independent journalist Glenn Greenwald lampooned Stelter’s “sycophantic” interview.

Two actual questions from a CNN host to the spokesperson for the planet’s “most powerful politician”:

Stelter then claimed that “a lot of liberals don’t think Fox should be called on” during White House press conferences, and asked, “So why do you call on Fox News and Newsmax?”

Stelter also asked what Psaki learned from previously being a commentator for CNN, and how that helps her in her current job as White House press secretary.

And later on in the gushing interview, Stelter asked Psaki about how her time as a CNN commentator helped her do he… https://t.co/2tfX4d8CMK

Stelter may have hinted that Psaki shouldn’t be taking questions from Fox News since it is CNN’s competition, but recently Stelter has been taking a beating in the ratings. In the first week of May, Stelter’s “Reliable Sources” talk show suffered its lowest ratings of the year, averaging only 810,000 total viewers for the May 2 episode.

“Reliable Sources” is down 53% in viewership since January. 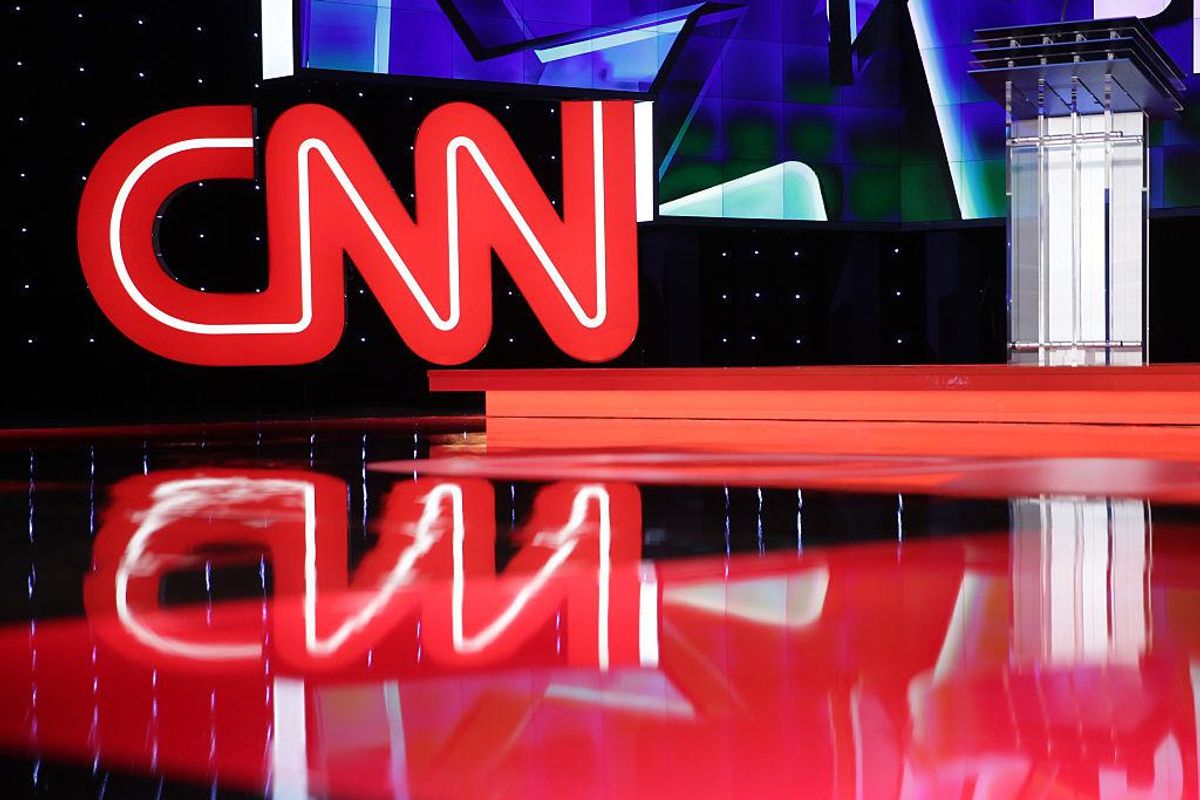 The post-President Trump world has left many media outlets hurting for clicks and viewers, but possibly the hardest-hit network could be CNN. “Reliable Sources” suffered its lowest ratings of the year, and yet somehow the news gets even worse for host Brian Stelter.

“Reliable Sources” averaged only 810,000 total viewers for the May 2 episode, which was the smallest audience the show had so far this year, according to Fox News. It gets even worse for the struggling Sunday morning cable TV news show because in the highly coveted demographic of adults ages 25-54, “Reliable Sources” was able to garner an abysmal 163,000 viewers. The news opinion program had viewership below 1 million for five consecutive weeks.

To add insult to injury, “Reliable Sources” had better ratings without regular host Stelter, who has often been labeled as a “hall monitor” by his critics. The previous week’s episode with fill-in host John Avalon notched 907,000 viewers, nearly 100,000 more than when Stetler returned from vacation. Avalon also did better with the advertiser-friendly 25-54 demo, averaging 182,000 viewers.

“Reliable Sources” claims to examine “the media world – telling the story behind the story – how the news gets made,” but often spends large portions of the show criticizing Fox News, especially with Donald Trump not available as a viable target since he is out of the White House.

Turn on @CNN – it’s @ReliableSources time – @JohnAvlon is in the chair while I’m somewhere out here. Guests:… https://t.co/GwklZXZIc1

CNN’s “New Day” program is also struggling mightily, despite having a brand-new host. “New Day,” which has a new co-host in Brianna Keilar who replaced Alisyn Camerota, had its worst ratings of the year last week. “New Day” is averaging fewer than 500,000 viewers with Keilar at the helm, down 37% compared to the first quarter with co-hosts Camerota and John Berman, according to Nielsen Media Research. “Fox & Friends,” the direct competition for “New Day,” reeled in an average of 1.2 million viewers from April 26 through May 2.

Overall, Fox News was the clearcut ratings winner with an average of 2.3 million primetime viewers, surpassing MSNBC with an average of 1.6 million. “Tucker Carlson Tonight” averaged 2.9 million viewers, making it the most-watched cable news program of the week.

A new Rasmussen Reports survey found that CNN is likely to continue to struggle in the ratings department. A survey of 1,000 likely voters between May 3-4 were asked if they continue to watch the big three cable networks.

Fox News was the winner with 41% of viewers saying they continue to watch the conservative news channel. But viewers are less likely to watch left-wing cable networks CNN and MSNBC. A mere 25% of respondents said they “generally watch” CNN, and only 21% said they tune into MSNBC.

“It may be that the biggest loser in last year’s election wasn’t a political candidate, but CNN, which has seen its ratings drop precipitously since former President Donald Trump left office in January,” Rasmussen Reports stated. “Those numbers are a sharp reversal from four years ago, when Trump’s presidency proved a ratings gold mine for CNN. In a June 2017 survey, 47% of regular cable news viewers said they generally watched CNN, compared to 33% for Fox News and 16% for MSNBC.”

During President Joe Biden‘s first 100 days in office, ratings have plummeted for CNN and MSNBC.

“On average, 1.3 million household viewers were watching MSNBC in the last week of January, shortly after Biden took office,” The Hill reported. “For the week ending April 25, that number was 868,000. At CNN, those figures went from 1.2 million to 749,000.” 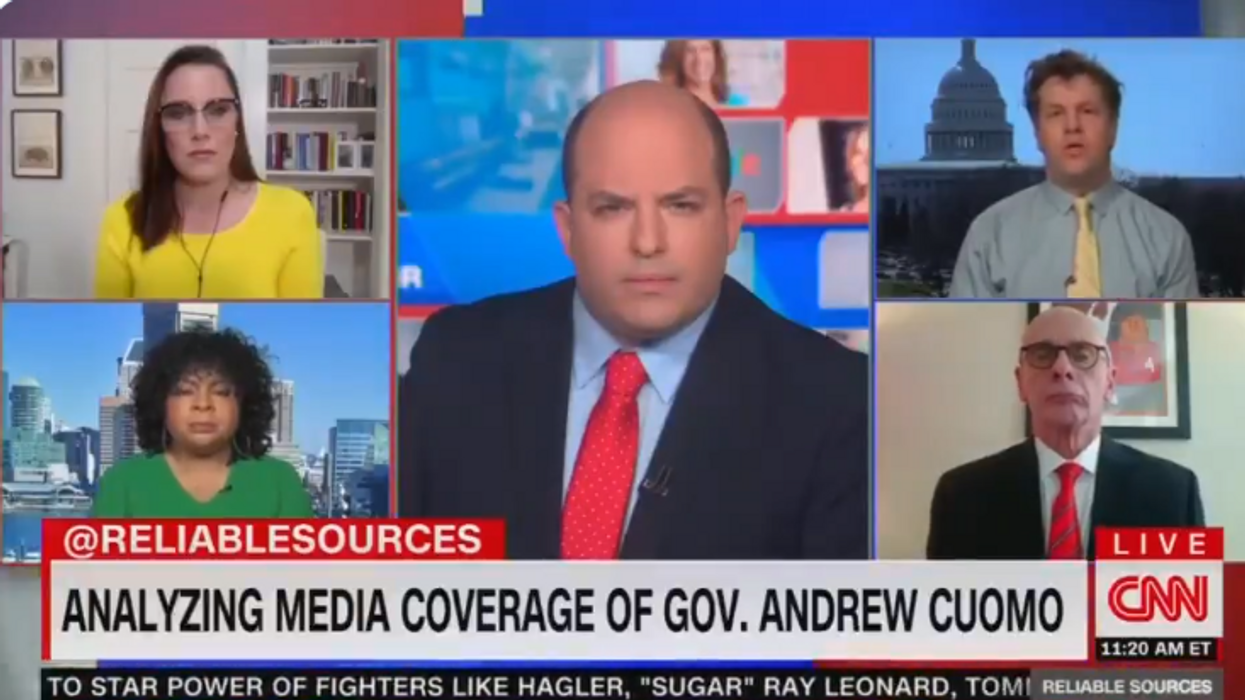 Chris Cuomo is the anchor of CNN’s “Cuomo Prime Time,” which is self-described as a “news program where Cuomo tests power with newsmakers and politicians from both sides of the aisle.” However during the coronavirus pandemic, Cuomo welcomed his New York governor brother on the show to deliver an unchallenged and glowing narrative of his leadership.

Many times the interviews were completely unprofessional and chummy. There were jokes that the governor only appeared on the show because their mom made him and then there was a strange segment that involved a gigantic Q-tip. All this positive coverage despite New York having the second-most coronavirus deaths per million and there being bombshell reports that New York’s nursing home deaths were far higher than Cuomo’s administration admitted.

Cuomo has not appeared on his brother’s CNN show since the flurry of sexual harassment allegations against the governor started to storm in.

Flash forward to Sunday, Wemple was a guest on “Reliable Sources” to discuss the media coverage of Andrew Cuomo and his scandals. Wemple did not hold back at pointing out the bias of a news network previously handing out flattering publicity to a political figure by his own brother.

“I would be remiss, Brian, if I didn’t mention CNN’s own huge media story here with Chris Cuomo, the anchor at the nine o’clock hour, who covered Andrew Cuomo and had all these wonderful love-a-thon interviews with him, more than ten of them,” Wemple told CNN host Brian Stelter.

“And they suspended the conflict of interest rule for Chris Cuomo for those interviews, yet all of the sudden they’ve enforced it again now that Andrew Cuomo is in the midst of a historic scandal in the Albany State House,” Wemple continued.

Stelter looked stone-faced as Wemple ripped his network during an interview on CNN.

WaPo’s Erik Wemple said it is a “major black eye for CNN” that they suspended the conflict of interest rule for Chr… https://t.co/3I8nWfEPro

To his credit, this isn’t the first time that Wemple has called out a left-leaning cable TV news host. In 2019, Wemple bashed MSNBC anchor Rachel Maddow for her partisanship and “rooting” for the Steele dossier to be true instead of being more concerned with the truth.

When small bits of news arose in favor of the dossier, the franchise MSNBC host pumped air into them. At least some of her many fans surely came away from her broadcasts thinking the dossier was a serious piece of investigative research, not the flimflam, quick-twitch game of telephone outlined in the Horowitz report. She seemed to be rooting for the document.

And when large bits of news arose against the dossier, Maddow found other topics more compelling.

She was there for the bunkings, absent for the debunkings — a pattern of misleading and dishonest asymmetry.

Right now, the focus of ShtfPlan.com is to make sure all readers are as UPDATED as possible on the Covid-19 pandemic. Download our EXCLUSIVE report immediately at: http://www.shtfplan.com/virus

Facebook has ramped up its censorship campaign, even against mainstream media’s “verified sources” by blocking articles about the coronavirus.  Multiple people have experienced the same thing, and this censorship comes the day after Facebook, along with Google, Twitter, Microsoft, LinkedIn, and Reddit issued a joint statement on combatting misinformation on their platforms.

We all know “combating misinformation” is simply code words for censorship and a desire to push the official narrative. But Facebook has been blocking articles from sites such as Medium, Buzzfeed, and USA Today. That’s one of the problems with censorship.  Once it starts, no one is safe from seeing their free speech destroyed and the freedom of the press decimated.

“It’s not just news articles,” according to one response to a tweet. “A community flier asking for emergency donations of food to the needy in our community was blocked. A friend in Canada had posts from Royal Canadian Mounted Police blocked. It’s very widespread.”

It's not just news articles. A community flier asking for emergency donations of food to the needy in our community was blocked. A friend in Canada had posts from Royal Canadian Mounted Police blocked. It's very widespread.

“Facebook is going hard on information control, I guess Facebook wants us all to be misinformed and die,” one person opined, according to a report by Forbes. The reality, according to a Facebook executive posting on Twitter, is that there was a bug in a system designed to stop spam.

We're on this – this is a bug in an anti-spam system, unrelated to any changes in our content moderator workforce. We're in the process of fixing and bringing all these posts back. More soon.

Spam or not, Facebook has been known to push the government’s official narrative and censor at their commands.

Facebook Censorship Continues: Diamond And Silk Are ‘Unsafe To The Community’

No, it's doing what it was designed to do

Facebook says they have “fixed” the bug that censored posts yesterday.

We’ve restored all the posts that were incorrectly removed, which included posts on all topics – not just those related to COVID-19. This was an issue with an automated system that removes links to abusive websites, but incorrectly removed a lot of other posts too.

However, people are still experiencing posts being deleted and removed by the social media giant.

Censorship is a slippery slope.  Once it starts, it’s almost impossible to reign in. This has been going on for quite some time too, as social media companies and the mainstream media remove posts they don’t like regardless of facts.