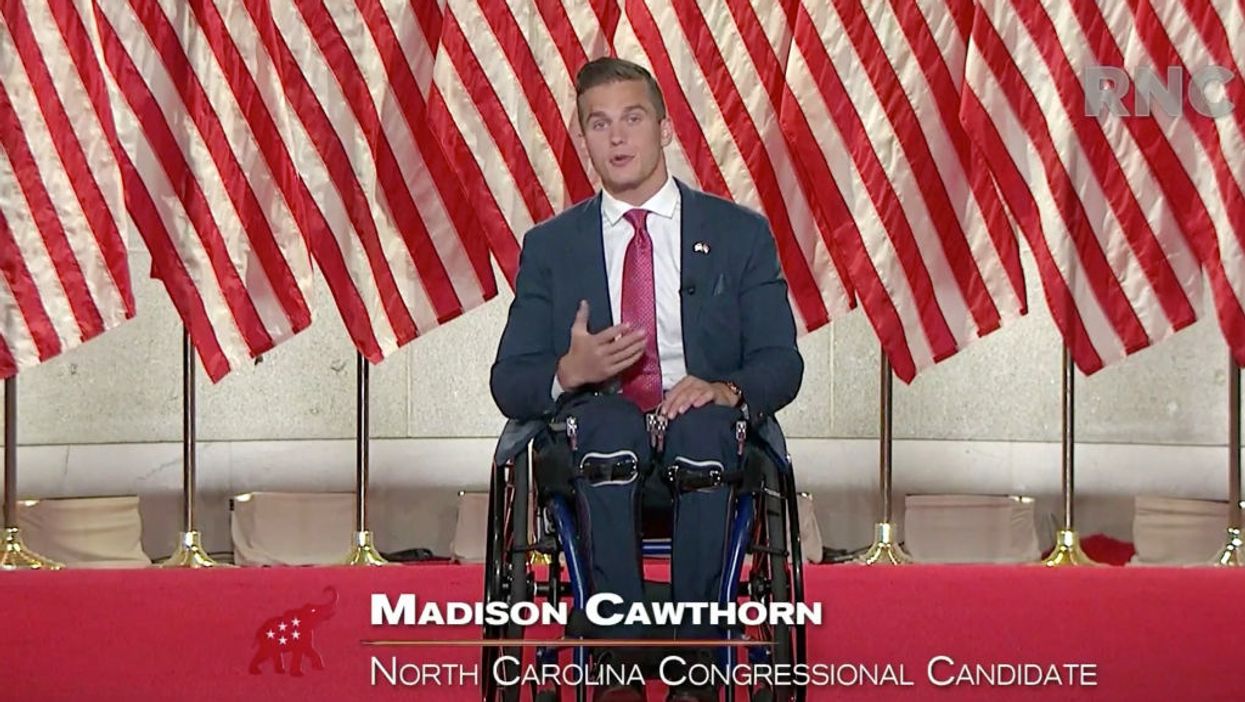 Newly elected congressman Madison Cawthorn (R-N.C.) is being called an anti-Semite after speaking about his Christian faith in a recent interview and describing his efforts to evangelize Jews and Muslims.

Cawthorn, 25, was
profiled by the Jewish Insider in an article published Monday that discussed his background and noted that after he was paralyzed from the waist down in a near-fatal car accident six years ago, he began preaching in North Carolina churches. Cawthorn, a devout Christian, shared how speaking at churches “really gave me a great platform to really share my testimony.”

“I would say I have a very, very, very strong faith and [am] very grounded in the actual word,” he said, adding that he’s read through the Torah and the Quran along with “just about every single religious work there is.”

He explained that he’s studied the Quran so that if he “ever was presented with the opportunity to speak to a practicing Muslim who was kind of thinking like, ‘Hey, you know, I’ve kind of got a feeling in my heart, I’m interested in Christianity.'”

He described his previous attempts to evangelize Muslims before being interviewed about evangelizing Jews.

“The thing I found when I was actually reading through the Quran is that Christianity — that is a very easy switch to make to lead a Muslim to Christ,” Cawthorn said.

“They believe Jesus is a real person,” he said of Muslims. “They believe he was a prophet, though. And so when you’re trying to lead an atheist to Christ, or, say, kind of a traditional Jewish person, you kind of have to make people really — you have to sell Jesus a lot, because, one, they don’t really believe that, you know — some very devout Jews just think he’s kind of a good guy. That’s great. But, you know, the Muslims, they already believe that he was somewhat divine, and so all you have to do is just be like, he wasn’t just a good man, he was a god, and now if you can submit to that then you believe in Christ.”

“I have, unsuccessfully. I have switched a lot of, uh, you know, I guess, culturally Jewish people. But being a practicing Jew, like, people who are religious about it, they are very difficult. I’ve had a hard time connecting with them in that way,” Cawthorn said.

He described evangelism as a calling for all Christians.

After Cawthorn’s comments were published, he was immediately accused of bigotry and anti-Semitism for sharing his Christian faith.

so weird that madison cawthorn actively works towards stopping jewish culture and making sure there are fewer jews… https://t.co/mPM9jI5DAh

This new congressman doesn’t think people should be Jewish and is actively trying to make there be fewer Jews in Am… https://t.co/lwOXmpi0UE

Christians believe God commands believers to share the Gospel of Jesus Christ. Jesus commands his disciples in Matthew 28:19, “Go therefore and make disciples of all nations, baptizing them in the name of the Father and of the Son and of the Holy Spirit.” In the first chapter of Acts, Jesus told his followers they would evangelize first to Jews, then to gentiles, saying, “You will be my witnesses in Jerusalem and in all Judea and Samaria, and to the end of the earth.” 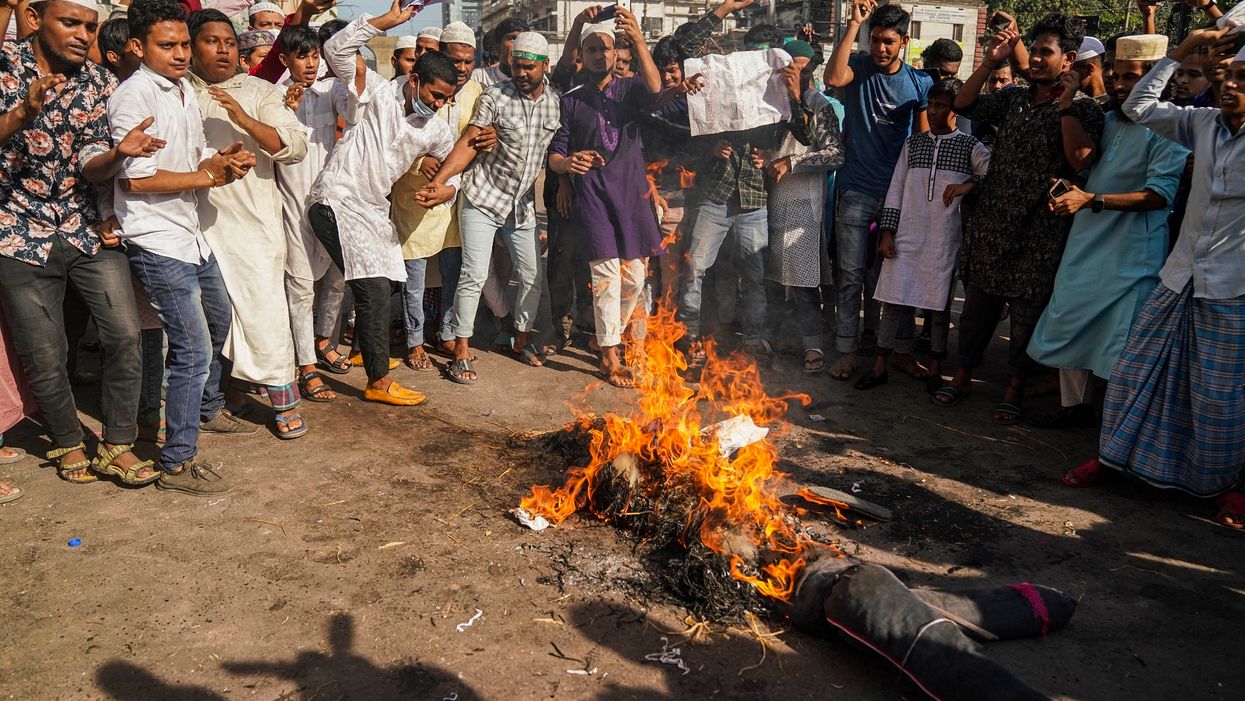 Protests against France continue to rage in countries across the world, with tens of thousands of Muslim demonstrators taking to the streets demanding the French ban satirical cartoons depicting Islamic Prophet Muhammad.

Demonstrators have burned and hanged effigies of President Emmanuel Macron due to his refusal to condemn the circulation of the cartoons published in Charlie Hebdo magazine, after a teacher was beheaded last week allegedly for sharing the materials in a lesson on free expression.

A second attack linked to terrorism left at least three churchgoers dead — with one beheaded — on Thursday in Nice, France, after calls for jihad over the blasphemy of mocking the religious figure.

In 2015, Charlie Hebdo’s offices were attacked by gunmen, who left a dozen dead and another 11 injured in retaliation for the satirical magazine publishing cartoons depicting Prophet Muhammed.

Charlie Hebdo republished the cartoons earlier this year in conjunction with the trial of 14 people accused of assisting in the murders, leading to a reemergence of uproar from Muslims and renewed threats to the magazine’s employees.

Following the second publication of the cartoons, French teacher Samuel Paty showed the images to his students earlier this month. As TheBlaze previously reported:

The father of one of his students began an internet campaign against Baty, uploading videos to YouTube and Facebook blasting the teacher and claiming that he showed cartoons of Muhammad with his genitals exposed. The campaign caught fire in the Muslim world, with worldwide calls for reprisal against Baty and against the French government, who naturally refused to take action against Baty.

Ultimately, Baty was murdered and beheaded on Oct. 16 by an 18-year-old Chechen Muslim refugee named Abdoullakh Abouyedovich Anzorov, who was himself caught and killed by police as he attempted to flee the scene.

Macron responded by holding a ceremony honoring the murdered teacher, where the French president declared, “He was killed because Islamists want our future. They will never have it.”

Hard-line Muslims worldwide called for boycotting France following the ordeal. Meanwhile, some French citizens have showed their solidarity with Macron in honoring the teacher and free expression by displaying the Charlie Hebdo cartoons in windows of homes and shops.

The Associated Press reported that “tens of thousands of Muslims, from Pakistan to Lebanon to the Palestinian territories, poured out of prayer services to join anti-France protests on Friday, as the French president’s vow to protect the right to caricature the Prophet Muhammad continues to roil the Muslim world.”

Demonstrations in Pakistan’s capital Islamabad turned violent as some 2,000 people who tried to march toward the French Embassy were pushed back by police firing tear gas and beating protesters with batons. Crowds of Islamist activists hanged an effigy of French President Emmanuel Macron from a highway overpass after pounding it furiously with their shoes. Several demonstrators were wounded in clashes with police as authorities pushed to evict activists from the area surrounding the embassy.

In Bangladesh, protesters set an effigy of Macron ablaze.

One cleric leading protests in Pakistan yelled, “There’s only one punishment for blasphemy,” to which the crowd yelled back, “Beheading! Beheading!” 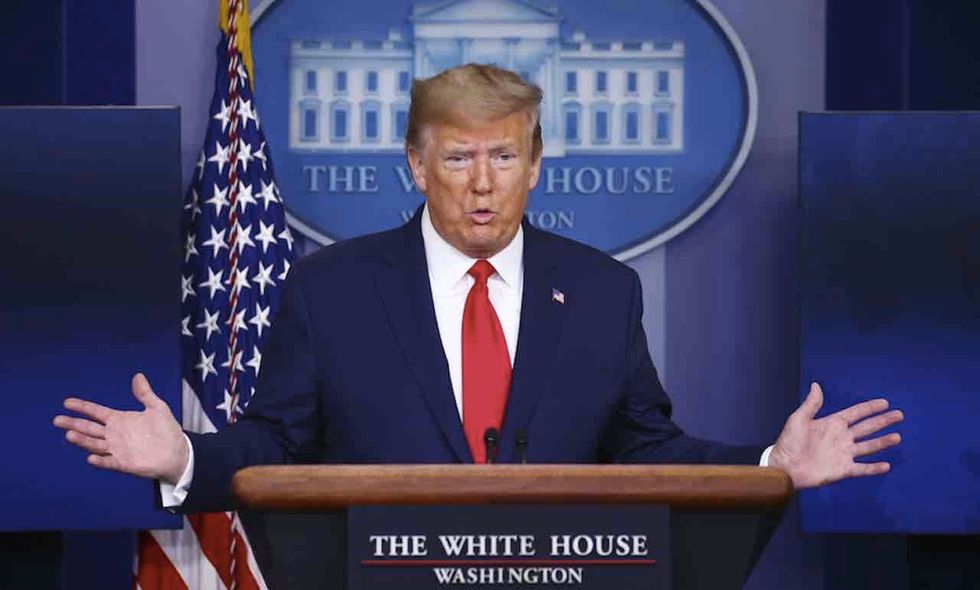 President Donald Trump accused Democrats of bias against Christians and Jews — and wondered if coronavirus social distancing policies will be enforced against Muslims during Ramadan.

“They go after Christian churches, but they don’t tend to go after mosques,” Trump said of Democrats during a news conference Saturday.

A reporter asked Trump about his retweet of conservative author Paul Sperry’s Twitter post, which asked, “Let’s see if authorities enforce the social-distancing orders for mosques during Ramadan (April 23-May 23) like they did churches during Easter.”

During Ramadan — a 30-day period which begins Thursday — Muslims don’t eat or drink between dawn and sunset.

“I mean, I’ve seen a very strong anti-Israel bent in Congress with Democrats,” Trump said, adding that it “was unthinkable seven or eight or 10 years ago. And now they’re into a whole different thing between Omar and AOC — I say AOC plus three; add them on. You have — I mean, the things that they say about Israel are so bad. And I — I can’t believe it.”

Omar and Tlaib both have made multiple anti-Semitic statements.

‘They go after Christian churches, but they don’t tend to go after mosques’

Then apparently turning back to Democratic governors who’ve made headlines for enforcing coronavirus stay-at-home orders prior to Easter, Trump said he would be “very interested” to see what happens over Ramadan “because they go after Christian churches, but they don’t tend to go after mosques. And I don’t want them to go after mosques, but I do want to see what their — what their bent is.”

But when a reporter asked Trump if he’s suggesting “imams wouldn’t follow social distancing,” the president said no, adding that he just had a “tremendous” phone call with imams, rabbis, and ministers.

“I am somebody that believes in faith,” Trump also said. “And it matters not what your faith is, but our politicians seem to treat different faiths very differently. And they seem to think — and I don’t know what happened with our country — but the Christian faith is treated much differently than it was. And I think it’s treated very unfairly.”

As it happens, a mosque in New York is reportedly still open for daily prayers amid the coronavirus pandemic — and Muslims are still allowed gather in the mosque’s prayer room for calls to prayer throughout the week.

The Council on American-Islamic Relations condemned Trump’s words, saying on Sunday that he promoted a “notorious anti-Muslim bigot’s tweet questioning whether U.S. mosques will be treated differently during the upcoming month of Ramadan than churches were treated during Easter amid the COVID-19 pandemic lockdown.”

CAIR National Executive Director Nihad Awad said in a statement that Trump’s “bigoted attempt to use American Muslims as a political football just before the holy month of Ramadan was as divisive as it was insulting. Mosques across our nation have already announced plans to remain closed indefinitely because the American Muslim community, unlike President Trump, recognizes the ongoing threat of the coronavirus.”

Awad added that the president’s “claim that American mosques — many of which have been protested, threatened, vandalized and even bombed in the years since he launched his first presidential campaign — receive preferential treatment compared to other faiths is an Islamophobic fantasy. Instead of fanning the flames of bigotry to distract the public from his own failures, the President should focus on combating the continued spread of the coronavirus.”

Here’s a clip of Trump’s news conference via CAIRtv, which called them “incoherent”:

*Turkey on incoming migrant waves: European states will perish and economies will crash*https://t.co/QzXRuS2IE5 — Voice of Europe ? (@V_of_Europe) March 11, 2020 Turkish propaganda attempts to pass off photos from 2015 from the Hungarian border for present day Greece. Please be vigilant and cautious of propaganda and narratives coming from Turkey and Erdo?an‘s regime. Hundreds … Read more

#Erdogan: "After we opened the doors, there were multiple calls saying 'close the doors,'" he said. "I told them 'it's done. It's finished. The doors are now open. Now, you Europe will have to take your share of the burden."#BreakingNews #Breaking #MigrantCrisis #Migrants — Infinite Unknown (@SecretNews) March 3, 2020 It’s an invasion!… The scale … Read more