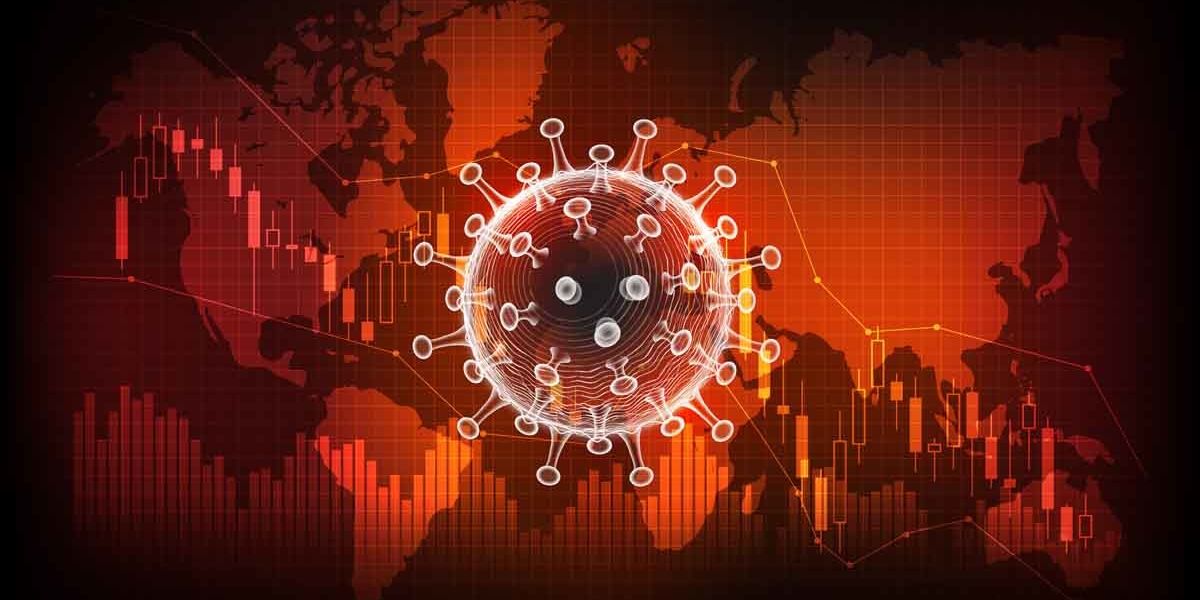 Whether it’s forcing people to wear a mask on a Zoom call, while at home, or while having marital relations, wearing a mask is the new cult. No evidence is needed to force it upon us, and the more the virus spreads in areas that already mandated masks, the more they double down on their faith in the cloth. As such, it was only a matter of time before they fabricated evidence of its effectiveness. After all, they can’t produce any unfabricated evidence.

On August 5, Kansas Department of Health Secretary Lee Norman tried to prove through a visual aid that the Kansas counties that followed the governor’s mask mandate had fewer COVID-19 cases than the no-mask counties. Thanks to the Republican-dominated legislature, 90 out of Kansas’ 105 counties were able to opt out of Democrat Governor Laura Kelly’s mask mandate. Naturally, it was reasonable for Secretary Norman to try to ascertain which counties did better. What wasn’t natural, however, was the manipulated chart he used to show the media that the mask counties did better, when in fact the opposite was true.

During the media briefing, Norman displayed the following chart on an easel. (This graphic has an added title line, “What Kansas Health Secretary Norman Gave to Media/Public.”) 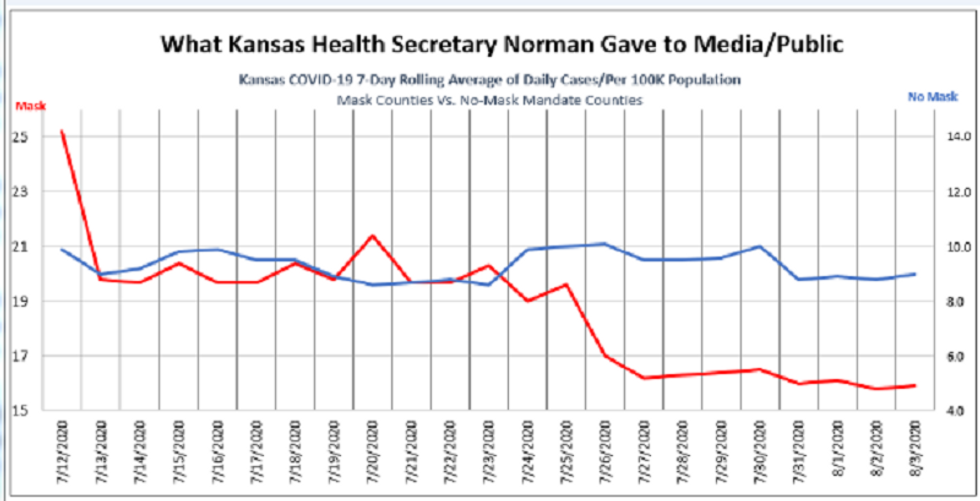 As KAKE reported, Michael Austin of the Kansas Policy Institute noticed something was off. He knew from the raw data that the non-mask counties had a lower case rate. Then he realized that this graphic was using two different x-axis lines in the same graph for the two categories. This explains why the chart depicts an impossible flat blue line for non-mask counties even though it appears to go down from 21 to 9. In fact, the cases for mask counties in red are based on the left axis, with a scale of 15 to 25, while those without mandates are based on a secondary axis on the right, with a scale of 4 to 14.

What does the chart look like if you actually placed them on the same axis to reflect the authentic case per capita data, as any honest person would do? Here is the chart Michael Austin sent me: 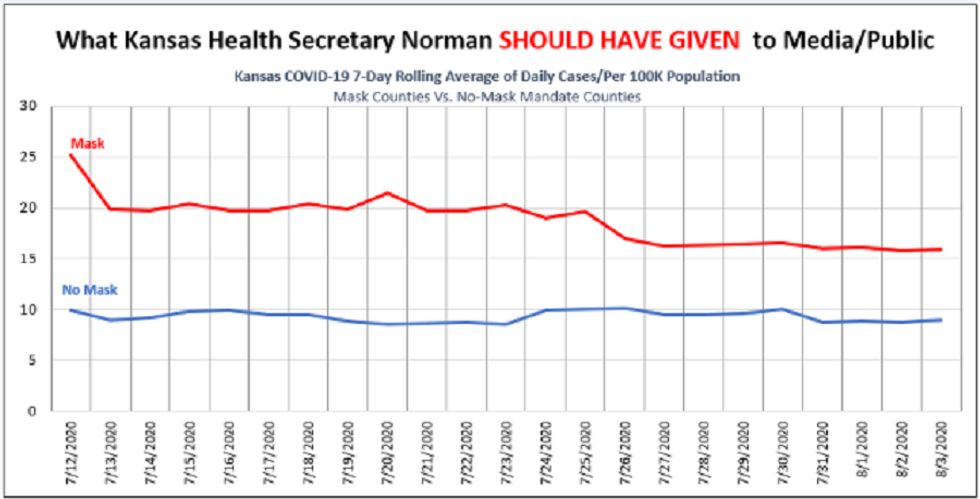 As you can see, while the mask counties did go down from about 25 to 15, they always remained higher to this day than the non-mask counties, which have flatlined at about 9-10 cases per 100K. In other words, those counties with mandates have about 77% more cases per capita per day than those without the mandate, yet the health secretary sought to depict the opposite.

One might suggest that even though Secretary Norman was wrong about the rate of cases in mask counties dipping below those of non-mask counties, it still dropped at a relatively sharper pace than in non-mask counties. The problem with this analysis is that the rate of hospitalization was already dropping at least a week earlier in early July. 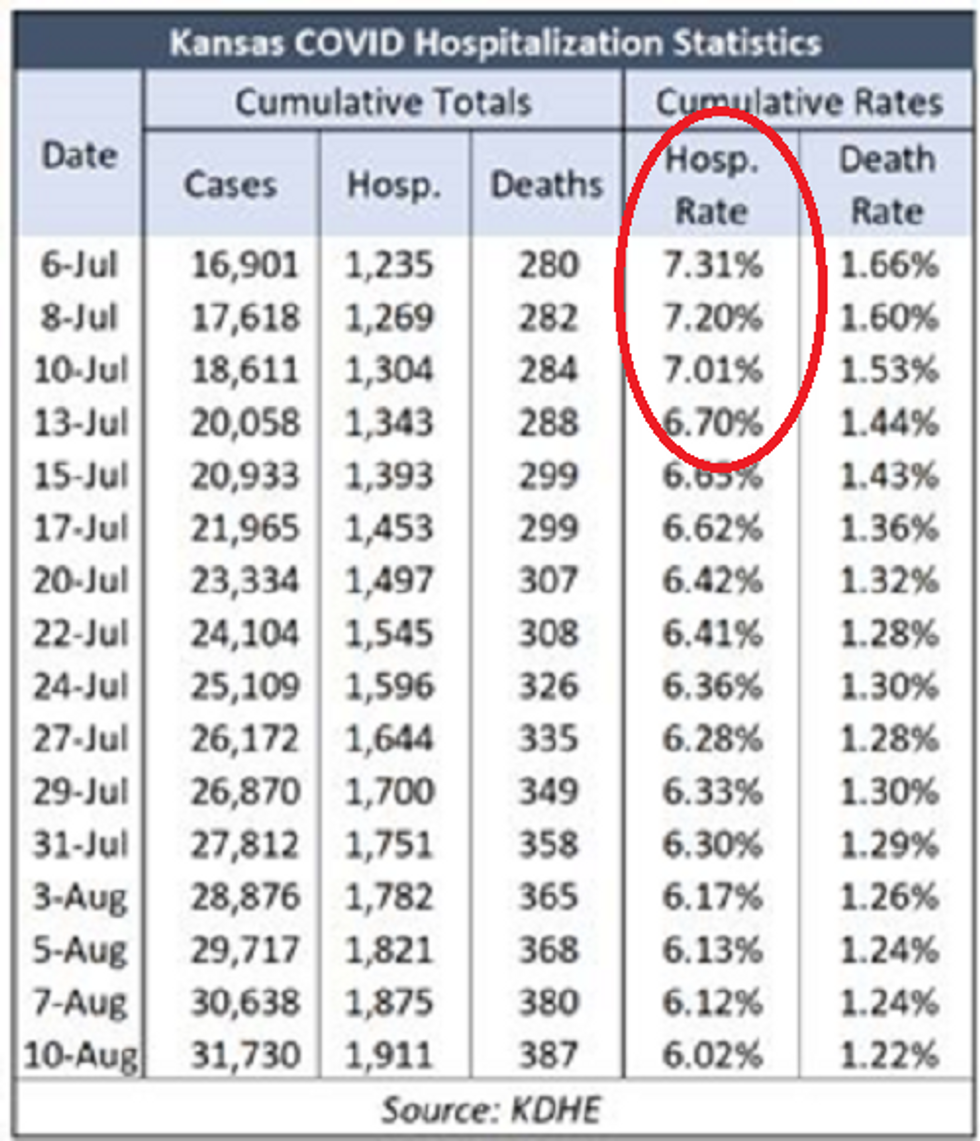 This was the story in every state that got hit earlier and then had another mild wave in June. It mainly hit the highly dense urban areas, the virus raged for about six weeks regardless of public policy, and then it started to decline. Whereas most rural, low-population-density counties around the country simply always had a low, flat curve, rather than a sharp peak. All of the non-mask counties are rural counties, but the largest urban areas, such as the greater Kansas City metro, Lawrence, Wichita, and Topeka, were all in counties that did not opt out of the governor’s mask mandate. 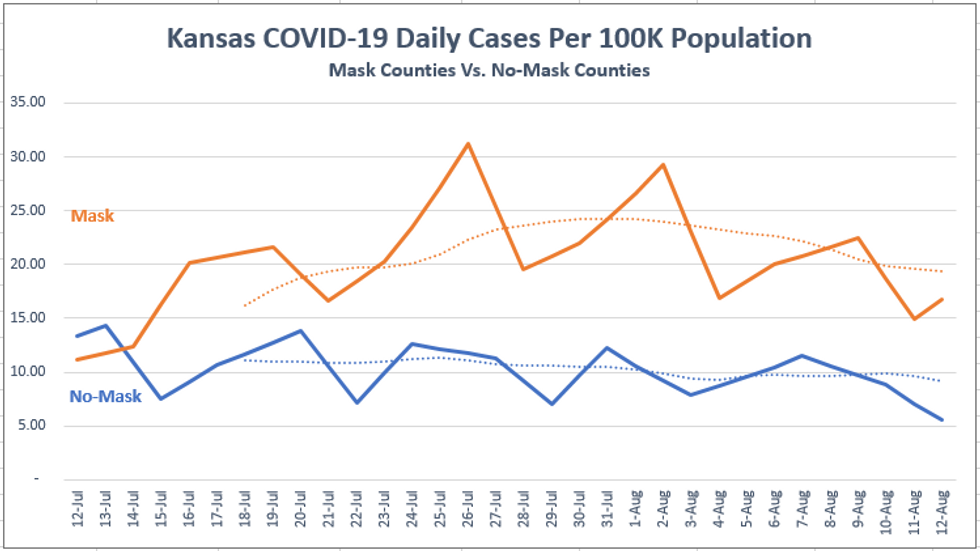 Thus, as we see today with the late-hit states in southern latitudes like Hawaii, the mandates in place for months didn’t help prevent their peak in cases, and the states that got hit earlier before masking became cool began to decline before the mandate was in place. The virus does what the virus does.

Moreover, the non-mask counties actually did much better per capita than any of the data suggest because they have the anomaly of dealing with the meat-packing plants, one of the most vulnerable places for transmission in the country. Typically, rural counties have far fewer cases per capita than urban counties. However, Kansas has many agricultural processing interests with vulnerable facilities as well as vulnerable populations that have tested positive.

This is reflected in the astounding fact that 41 percent of all cases in Kansas where ethnicity has been confirmed are among Hispanics, even though they are just 11 percent of the state’s population. Their case rate per capita is nearly six times that of non-Hispanics. This is clearly driven by the agricultural facilities.

Then again, you can’t blame liberals for trying to manipulate data to demonstrate the effectiveness of their new religious symbol. As Swedish epidemiologist Anders Tegnell said, scientific evidence for mask-wearing to prevent COVID-19 is “astonishingly weak,” and it is “very dangerous” to believe that face masks on their own could control the spread of the disease. And he would know. His country has now achieved in real life what the Kansas health secretary chose to fabricate on a chart, all without mandating masks. 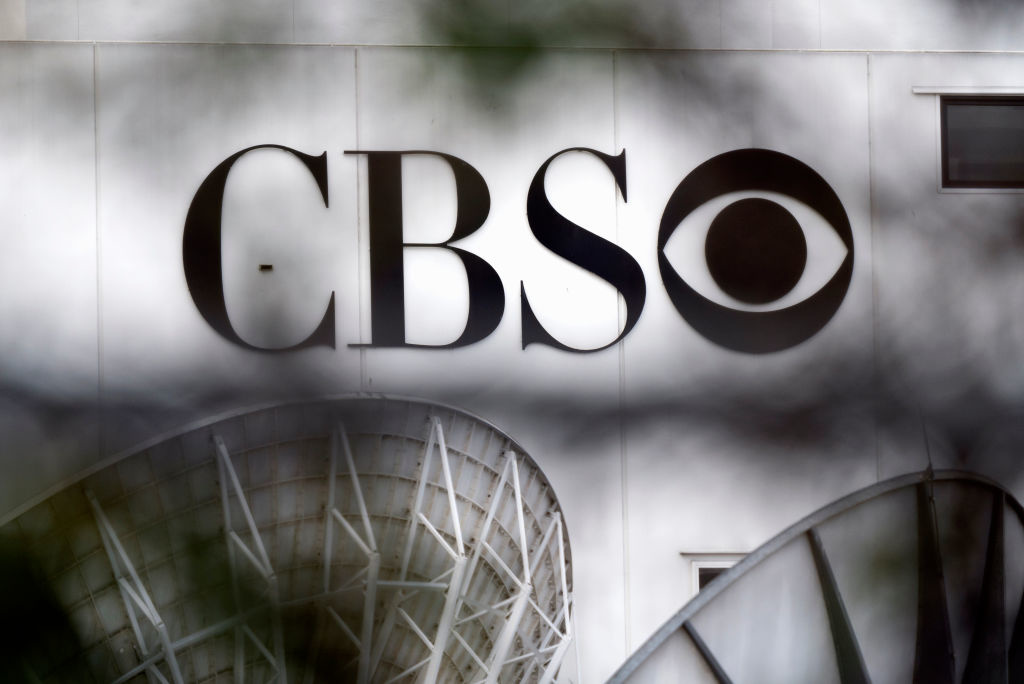 Last week, CBS News admitted to an “editing mistake” after it got caught using footage of an overwhelmed Italian hospital while describing the coronavirus conditions in New York City.

In a statement to Fox News, a CBS spokesperson acknowledged the mistake and assured that it “took immediate steps to remove it from all platforms and shows.”

Yet, despite the admission and supposed subsequent actions, CBS News has continued to use the misleading footage. In a news segment April 4, the outlet used the footage again, this time while discussing the coronavirus outbreak in Pennsylvania.

Here’s the full CBS News segment from April 4. The footage is displayed at the 3:00 mark:

“In Pennsylvania, cases are skyrocketing at the rate of 1,000 a day,” a reporter can be heard saying as the Italian hospital footage flashes across the screen. “Gov. Tom Wolf is appealing to citizens to help,” the reporter continues.

It’s not the first time

The footage in question was shot and aired March 19 by Sky News in a video report about an overrun hospital in Bergamo, Italy, during the height of the country’s fight against COVID-19.

The video shows medical staff at the hospital scrambling around in a tightly packed, recently converted intensive care room while attending to direly ill patients with limited resources. Several patients can be seen gasping for air. With the video, Sky News intended to broadcast to the world how grim the situation was in northern Italy.

On March 25, CBS aired the clip during a segment about the growing crisis in New York City.

Critics have slammed CBS for using the misleading clip, arguing that especially in times of crisis, the media has a duty to give accurate information so as not to misinform.

At best, CBS made another egregious “editing mistake.” At worst, the news outlet is purposefully trying to conjure up fear by using the distressing footage.

At the time Sky News aired the original video, the health care system was near collapse. Doctors were reportedly having to choose between patients due to limited resources and, in many cases, were forced to leave elderly patients to die. At the Bergamo hospital where the clip was shot, health care workers had to convert many of the hospital rooms into make-shift intensive care units to treat the growing number of critically ill patients.