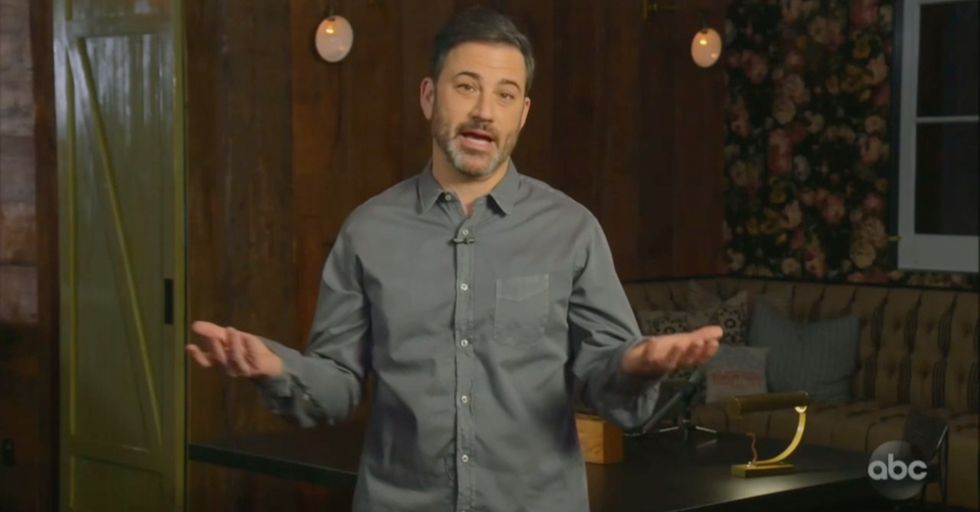 Jimmy Kimmel, late-night host of “Jimmy Kimmel Live!” blasted Trump-supporting protesters during a Monday night monologue, questioning everything from their intellect to their intent.

Kimmel, delivering his monologue from his multimillion-dollar home in the Los Angeles area, said that demonstrators protesting the state’s stay-at-home orders are “crazy right-wing” voters.

“People are getting restless,” he said. “Especially the people who aren’t too bright. In Florida, on Saturday, I saw the hashtag #FloridaMorons was trending and thought, well, this could mean a lot of things.”

Pointing to the Florida governor’s decision to open the beaches in Jacksonville, Kimmel said, “[O]f course no one followed the rules. Fortunately, there are no old people living in Florida who might be at risk.”

He then took a swipe at another southern state — Georgia — in an apparent swipe at country culture.

“The governor of Georgia is planning to reopen tattoo parlors and bowling alleys this week,” he added. “Which I think that’s on their state flag, right?”

Kimmel then went on to address the stay-at-home protests taking place across America.

“There were some very creative signs that illustrated this plight,” he mocked. “Many are experiencing so powerfully, like, ‘I need a haircut. Massage is essential. Jesus is my vaccine.'”

He continued, “In Denver, Colorado, there was a standoff between protesters and an angry health care worker. Well, you know what they say: It ain’t over till the fat lady screams crazy, right-wing talking points at a medical professional who’s trying to save her family’s lives.”

Kimmel said the big reason people are feeling so emboldened to stand up for their rights is because of President Donald Trump.

“[O]ur president is encouraging them,” he insisted. “Despite everyone who works for him telling people to stay at home. Despite the official White House mandate being shelter-in-place, over the weekend, the guy who runs the White House tweeted, ‘Liberate Michigan, liberate Minnesota, and liberate Virginia.'”

He continued, “I’m starting to think that these characters who support Trump might be suicidal. They seem to fight the hardest for the things that will kill them. They want freedom to gather in large groups during an epidemic. They want guns. They want pollution. I figured it out. They want to die and they’re taking us down with them.”