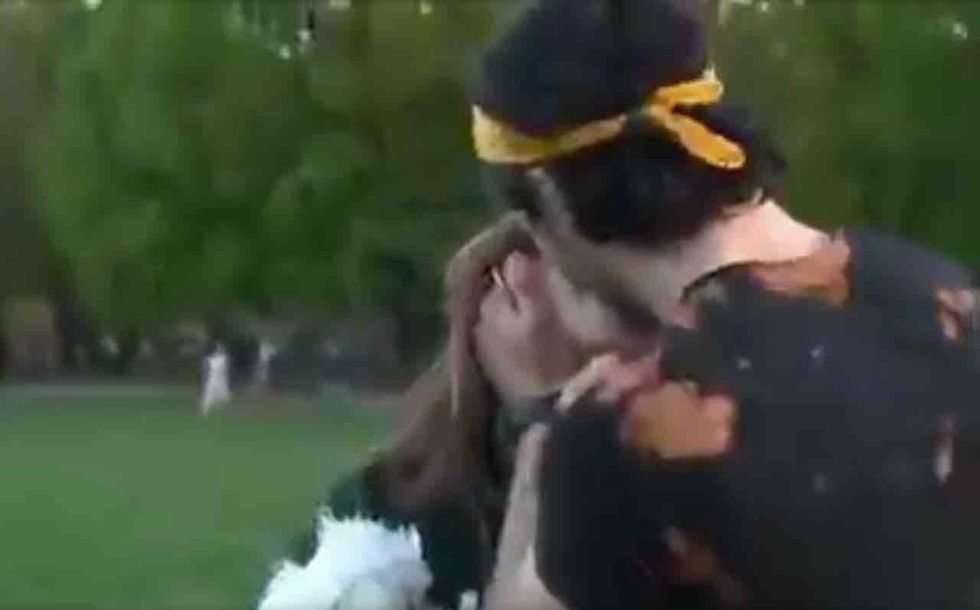 You knew this was bound to happen.

People have been social distancing amid the coronavirus for over two months — then the weather gets a tad warmer, and then what’s left of an otherwise frigid spring sets natural attraction in motion.

In this case it was a woman getting more than a little peck on the cheek from a “stranger” in a park, and it was all caught on a Canadian TV news camera.

CTV News was interviewing a woman on camera in a Toronto park about social distancing in a segment that aired last week. After she stated, “I feel as if masks are not 100% important …” a man stepped into the shot, told the news team “sorry to interrupt,” and proceeded to lay a big smacker right on her lips.

Amid the unexpected kiss — which lasted a surprising six seconds — the narrator called it “spontaneous” and said it was delivered by “someone she doesn’t know.”

But after the man walked away, the laughing woman told the news team she indeed met him earlier “for a second with my dog” and called the kiss “insane.”

When asked if she was all right, the woman gushed to the camera, “Yeah, he’s so hot.” The narrator then said the woman was “OK with the kiss,” after which the camera captured her blowing a kiss at the man and telling him to “text me.”

Who is that unmasked man?

The man who delivered the kiss, 25-year-old Jack Ring, told the Toronto Sun Friday he’s been getting a lot of comments that his actions were sexual assault. However, he told the paper he met the woman he kissed — Gillian McKeown — earlier the same day at Trinity Bellwoods Park, and the pair spent some time together.

“She sat down with us for the whole day, and she was telling me she likes me,” Ring told the Sun. “I went to the shop, and when I was away she had to leave, so she left her number with a friend for me and told me she wanted to get together, so I came back, and they told me what she said. I seen her being interviewed, so I went in for the kiss.”

He added to the paper that “people are assuming it’s just a random girl I don’t know, which is weird.”

But was he concerned about contracting COVID-19 from someone he doesn’t know?

Ring told the CTV reporter, “I think the kiss was worth it.”

McKeown declined comment Friday except to say “it was not sexual assault,” the Sun reported.

The video segment was tweeted by a CTV reporter and then deleted Friday after commenters raised concerns about consent, the paper said.

And then CTV Toronto News anchor Nathan Downer issued an apology that same day for the aired kiss, saying a “stranger came up to the woman and kissed her directly on the lips” and the “video demonstrated non-consensual behavior” which is “simply unacceptable and offensive.”

How are people reacting?

A cursory look at Twitter comments reveal a mixed reaction to the kiss. More than a few didn’t care for the smooch, and some even called it “assault”:

But other commenters said the male-female moment was no big deal: