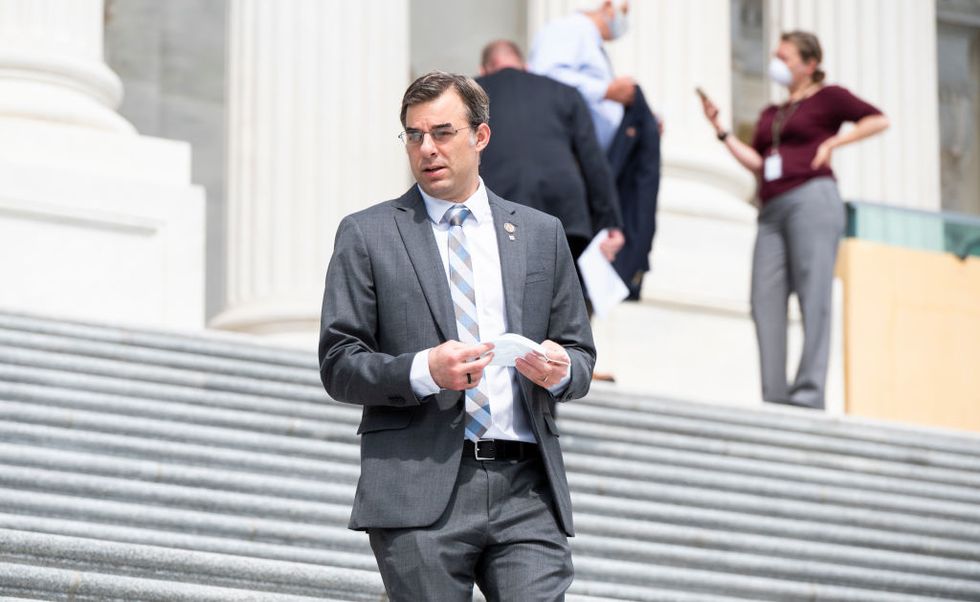 Rep. Justin Amash (I-Mich.) announced on Saturday that he would not run for president. The third-party Libertarian candidate noted that “this environment presents extraordinary challenges.”

Amash thanked his supporters in a series of tweets on Saturday, as he officially bowed out of a potential run in the 2020 presidential race. Amash said that “polarization is near an all-time high.”

“I’ve spent nearly three weeks assessing the race, appearing in media, talking to delegates and donors, watching the Libertarian Party’s convention plan unfold, and gathering feedback from family, friends, and other advisers,” Amash wrote. “After much reflection, I’ve concluded that circumstances don’t lend themselves to my success as a candidate for president this year, and therefore I will not be a candidate.”

“Today, most Americans are understandably more interested in what life will look like tomorrow than they are in broader policy debates, and news coverage has reflected those priorities,” he tweeted. “At the same time, fundraising challenges posed by an idled economy will hinder advertising.”

Amash launched an exploratory committee in April to seek the Libertarian Party’s 2020 nomination and announced he was running on April 28.

A Monmouth University poll showed that an Amash 2020 presidential run would hurt Joe Biden more than Donald Trump, and he took more Democratic voters than Republican.

Amash, who represents Michigan’s 3rd congressional district, was the only Republican who supported impeaching Trump, and he left the GOP in July 2019.

You can read Amash’s entire statement below:

This was a difficult decision for me, especially having seen grassroots supporters put so much effort into this campaign. It’s been humbling and awesome. I continue to believe that a candidate from outside the old parties, offering a vision of government grounded in liberty and equality, can break through in the right environment.

But this environment presents extraordinary challenges. Polarization is near an all-time high. Electoral success requires an audience willing to consider alternatives, but both social media and traditional media are dominated by voices strongly averse to the political risks posed by a viable third candidate. The new reality of social distancing levels the playing field among the candidates in many respects, but it also means lesser known candidates are more dependent on adequate media opportunities to reach people.

Today, most Americans are understandably more interested in what life will look like tomorrow than they are in broader policy debates, and news coverage has reflected those priorities. At the same time, fundraising challenges posed by an idled economy will hinder advertising.

The Libertarian Party’s national committee members and delegates have worked diligently to organize the national convention, but lingering uncertainty regarding ratification of online voting, the feasibility of 50-state ballot access and related legal challenges, and unity after the nomination have also weighed heavily on me. We must address these issues as a party to ensure we maximize our potential.

I’ve been speaking directly to delegates about this opportunity for only a short time, but these conversations have solidified my belief that the Libertarian Party is well positioned to become a major and consistent contender to win elections at all levels of government. I remain invested in helping the party realize these possibilities and look forward to the successes ahead.

If you aren’t already a member of the @LPNational, I encourage you to join me in becoming one so we can continue working together toward freedom, peace, and prosperity. 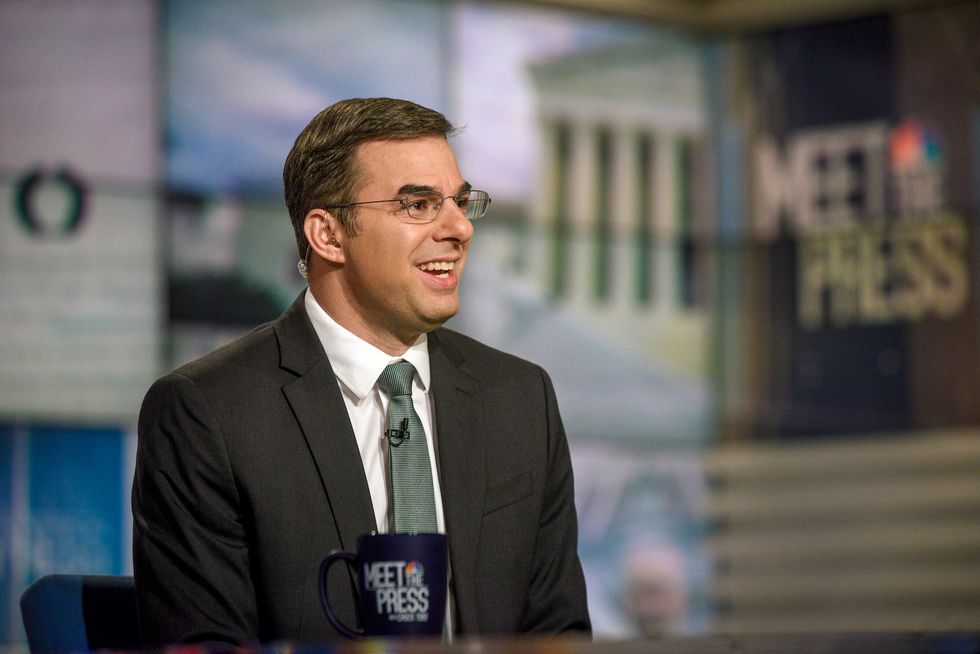 Independent (former Republican) Rep. Justin Amash of Michigan is considering a third-party presidential run as the Libertarian candidate. Even though he’s a conservative, his candidacy might hurt former Vice President Joe Biden more than President Donald Trump, according to a new poll.

A Monmouth University poll showed that in a one-on-one election, Biden is at 50% and Trump is at 41% nationally. When the question is changed to make it a race between Biden, Trump, and Amash, Biden gets 47%, Trump 40%, and Amash 5%. In this poll, Amash takes more voters from the Democrat than the Republican.

Nationally, that doesn’t make so much of a difference given Biden’s current polling lead. Looking back to 2016, however, gives a picture of just how impactful a third party candidate can be one way or the other.

That’s 46 electoral votes in three key states that went to Trump due to a combined margin of victory of 77,744 votes — it can matter greatly who the third party candidate siphons votes from.

Trump trailed Hillary Clinton in national polls leading into the 2016 election; and indeed, Clinton won the popular vote by a significant margin. Whether or not Trump can hold states such as Michigan, Pennsylvania, and Wisconsin will go a long way toward determining whether he gets reelected.

The polling indicates that Trump has a tight hold on Republican voters, while some Democrats seem inclined to choose Amash over the presumptive nominee, Biden. From Hot Air:

Four points come out of Biden’s support among independents with Amash in the race, which isn’t surprising. More surprising is the fact that five points also come out of his support among Democrats. By comparison, Trump loses just a single point among Republicans to the libertarian, a testament to how tight his grip on the party is.

If 2016 is any indication, Amash’s support as a hypothetical candidate in early polls will diminish when/if his candidacy becomes real, and as many voters get closer to Election Day and gravitate toward choosing a candidate that can actually win the election. 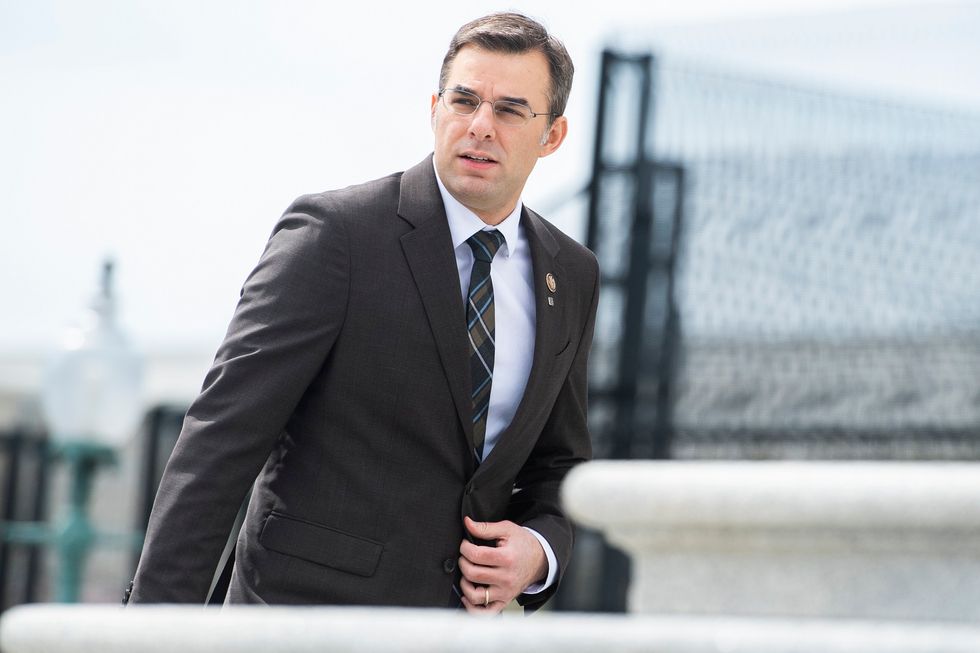 Michigan Congressman Justin Amash (I) has announced he is launching a 2020 presidential bid to become the nominee for the Libertarian Party.

In a
Twitter post on Tuesday, the former Republican shared a link to his campaign website with the message, “Let’s do this,” before explaining, “Today, I launched an exploratory committee to seek the @LPNational’s nomination for president of the United States. Americans are ready for practical approaches based in humility and trust of the people.”

He added, “We’re ready for a presidency that will restore respect for our Constitution and bring people together. I’m excited and honored to be taking these first steps toward serving Americans of every background as president.”

In a statement on the his campaign website, Amash writes:

We’re ready. For something new. For a government that secures our rights. For equality before the law. For an end to cronyism. For a government that fulfills its purpose and recognizes its limits. For practical approaches based in humility and trust of the people. For an honest, principled president who will defend the Constitution and put individuals first.

This is a developing story that will be updated. 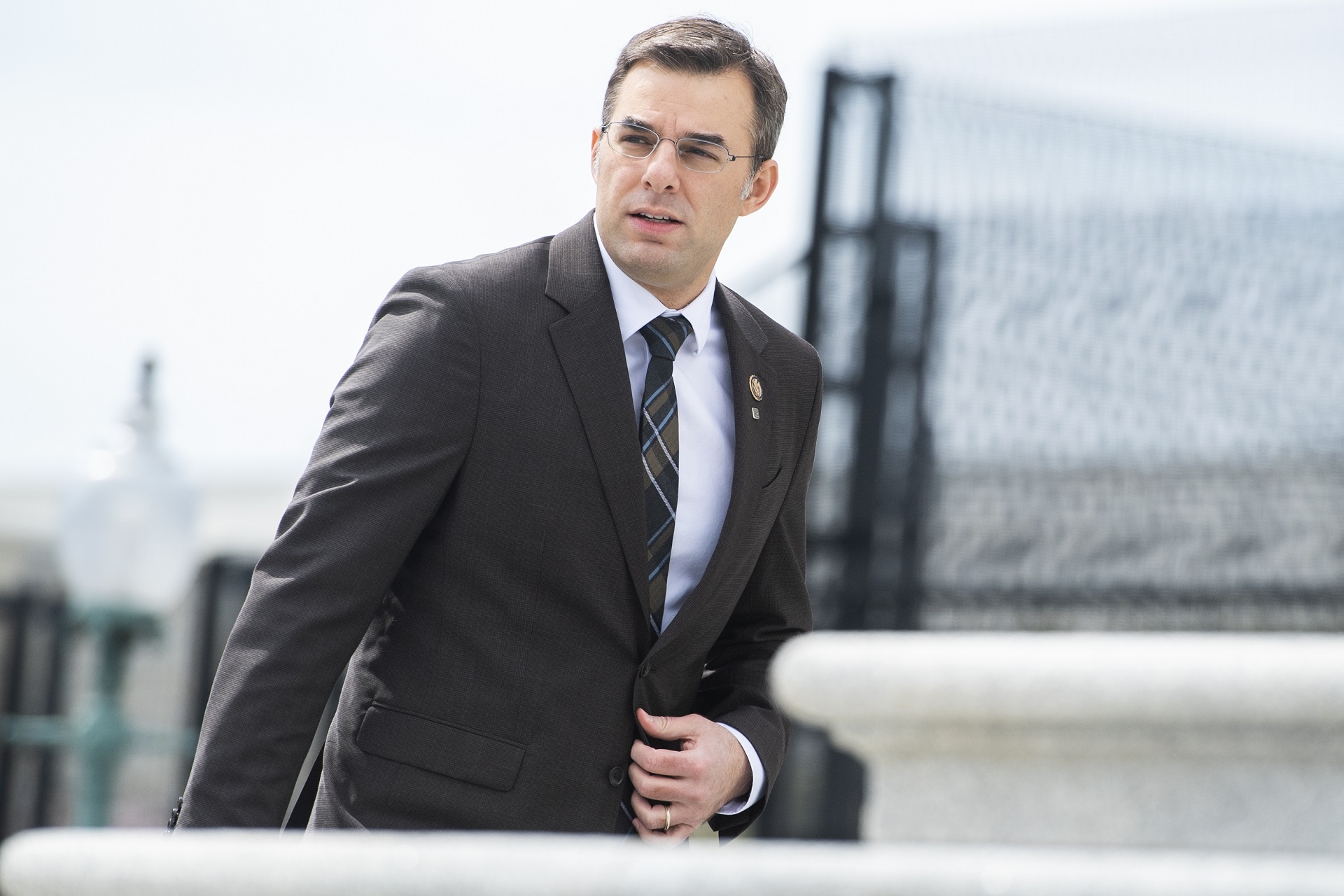 Rep. Justin Amash (I-Mich.), a former Republican known for
his knowledge of the Constitution, signaled Monday that he is considering a 2020 bid for the White House.

During a press conference addressing the coronavirus crisis, President Donald Trump
claimed the decision to reopen the economy lies with him rather than state governors, saying, “When somebody’s president of the United States, the authority is total, and that’s the way it’s gotta be.” The president added, “The governors know that.”

In reaction to the president’s comments, Amash — who left the GOP after being the
lone House Republican to call for an impeachment inquiry into President Trump — reacted to the comment by tweeting, “Americans who believe in limited government deserve another option.”

A supporter of Amash’s responded, “Please be you,” to which the congressman replied, “Thanks. I’m looking at it closely this week.”

Earlier in the day, President Trump had tweeted, “For the purpose of creating conflict and confusion, some in the Fake News Media are saying that it is the Governors decision to open up the states, not that of the President of the United States & the Federal Government. Let it be fully understood that this is incorrect.”

The president added, ‘It is the decision of the President, and for many good reasons. With that being said, the Administration and I are working closely with the Governors, and this will continue. A decision by me, in conjunction with the Governors and input from others, will be made shortly!”

To that, Amash wrote, “President Trump is flat-out wrong. The president has no authority to ‘close down’ or ‘open up’ the states. He’s the one creating conflict and confusion. Put down the authoritarianism and read the Constitution.”

Last week, the congressman tweeted that “Trump versus Biden is not the contest America deserves or the one it needs right now.”

Amash, who believes in “limited government, economic freedom, and individual liberty,” left the House Freedom Caucus last year, saying he “didn’t want to be a further distraction for the group.”

In an op-ed published by The Washington Post last year wherein he declared his “independence,” Amash warned, “Modern politics is trapped in a partisan death spiral.” 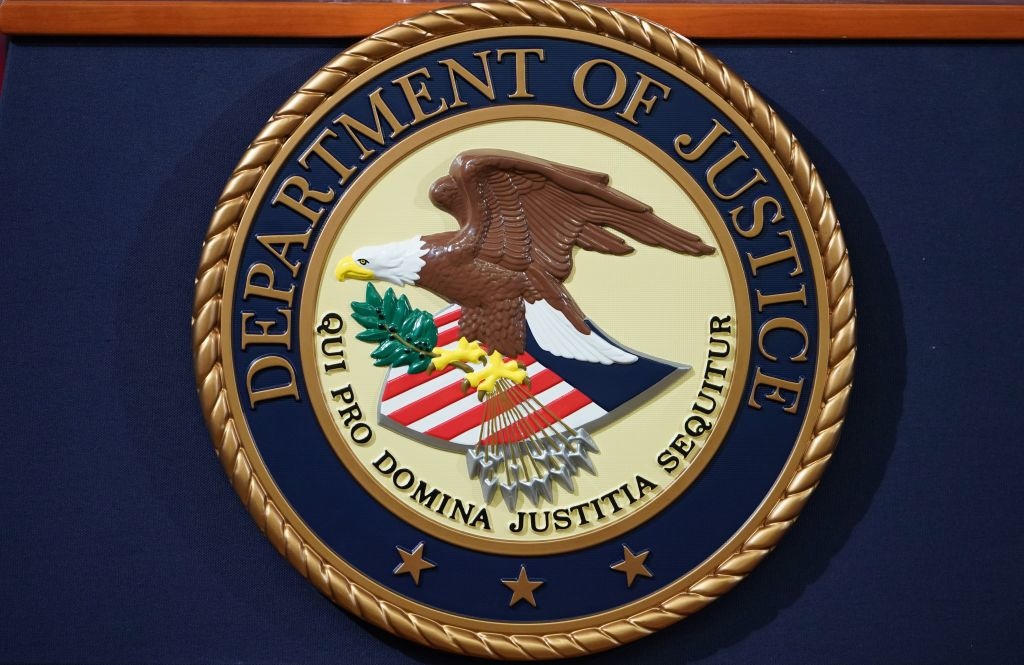 The Justice Department has quietly asked Congress for new “emergency powers” amid the coronavirus outbreak, including the power to ask chief judges to indefinitely detain people without trial.

The DOJ has proposed numerous emergency measures, according to Politico, which obtained and reviewed documents the DOJ sent to lawmakers.

In one of the documents, the department proposed that Congress grant the attorney general power to ask the chief judge of any district court to pause court proceedings “whenever the district court is fully or partially closed by virtue of any natural disaster, civil disobedience, or other emergency situation.”

The proposal would also grant those top judges broad authority to pause court proceedings during emergencies. It would apply to “any statutes or rules of procedure otherwise affecting pre-arrest, post-arrest, pre-trial, trial, and post-trial procedures in criminal and juvenile proceedings and all civil process and proceedings,” according to draft legislative language the department shared with Congress. In making the case for the change, the DOJ document wrote that individual judges can currently pause proceedings during emergencies, but that their proposal would make sure all judges in any particular district could handle emergencies “in a consistent manner.”

As Politico noted, the proposal — which would essentially permit indefinite detention — would likely violate a person’s right to appear before a judge and seek release after being arrested, a constitutional right known as habeas corpus.

Specifically, the Constitution states, “The privilege of the writ of habeas corpus shall not be suspended, unless when in cases of rebellion or invasion the public safety may require it.”

According to Politico, the DOJ is also asking to “pause the statute of limitations for criminal investigations and civil proceedings during national emergencies” as well as “expand the use of videoconference hearings, and to let some of those hearings happen without defendants’ consent.”

The reported proposals were met with swift bipartisan condemnation.

“OVER MY DEAD BODY,” Sen. Mike Lee (R-Utah) responded. “If this is a joke, it’s not funny. If it’s not a joke, we’ve got much bigger problems. @realDonaldTrump, please refute and disavow this immediately.”

“There’s a long history in this country and in other countries of using emergencies as times to really start to encroach upon people’s civil rights. And in fact, this is a time when we need them the absolute most,” she said on CNN Sunday. “It does not matter how urgent times are. We have to make sure that we retain our civil rights. And there’s no reason for us to be waiving folks’ civil rights in an emergency.”