But the FDA faces the same problem as every other federal agency. It does not have the personnel or resources to enforce all of its regulatory edicts without state and local support. By refusing to cooperate with FDA rules and regulations, and passing laws that encourage the growth of markets in federally-prohibited items, state and local action can nullify onerous FDA mandates in practice and effect.

State and local governments can undermine FDA regulations simply by getting out of the way and allowing markets to flourish with the passage of food freedom laws.

Wyoming enacted the first such law in 2015. The expansive law even allows poultry farmers with fewer than 1,000 birds to sell chicken and turkey, along with products made from their birds. It also authorizes the sale of raw milk, rabbit meat and most farm-raised fish. North Dakota, Utah and Maine have similar laws.

Wyoming expanded its Food Freedom Act in 2020 with the passage of two bills. HB155 allows consumers to buy individual cuts of meat through herd-share agreements. The law is modeled on laws that allow the sale of raw milk in some states. Consumers pay the rancher a fee for a “share” in either an individual animal or a herd. In return, the consumer gets cuts of meat. In effect, it completely bypasses the U.S. Department of Agriculture inspection regime, nullifying the federal law in effect.

HB84 allows for the sale of “non-potentially hazardous” homemade foods to be sold in retail stores and restaurants. “Potentially-non hazardous foods are defined as ” food that does not require time or temperature control for safety and includes jams, uncut fruits and vegetables, pickled vegetables, hard candies, fudge, nut mixes, granola, dry soup mixes excluding meat-based soup mixes, coffee beans, popcorn and baked goods that do not include dairy or meat frosting or filling or other potentially hazardous frosting or filling.

While state law does not bind the FDA, the passage of food freedom laws creates an environment hostile to federal food regulation. And because the state does not interfere with local food producers, that means it will not enforce FDA mandates either. Should the feds want to enforce food laws in states with food freedom laws, they have to do so by themselves.

Many people think CBD is legal now due to the fact that it’s available on virtually every street corner and the 2018 farm bill legalized industrial hemp. But this is not the case. While the DEA no longer has the authority to regulate or prohibit hemp, the provisions of the farm bill don’t limit the FDA. While farmers can now legally grow hemp for commercial purposes, the sale of cannabinol or food products containing CBD remains federally-illegal.

States can undermine FDA regulation of CBD by simply making it legal within their borders and refusing to enforce the agency’s regulations.

Over the last few years, at least 11 states (Arkansas, Florida, Maine, New Mexico, Texas, Virginia, West Virginia, Wyoming, Ohio, Oklahoma and New York) passed laws creating regulatory structures for the manufacture and sale of CBD. These laws open the door to the production and sale of CBD products produced in the state regardless of continued federal prohibition.

And at least 10 states expressly authorized CBD as an additive in food products, despite the FDA’s explicit prohibition, most recently, Virginia.

The federal regulation of raw milk reveals just how deeply the federal government is involved in local food issues. Not only do the Feds ban the transportation of raw milk across state lines; they also claim the authority to ban unpasteurized milk within the borders of a state. States can undermine federal prohibition schemes by legalizing raw milk sales within their borders.

In 2019, Vermont expanded raw milk sales in the state. The new law makes a number of changes to the state’s agriculture policies, including expanding raw milk sales. Under the law, farmers who sell more than 87.5 gallons to 350 gallons of raw milk per week can sell and deliver unpasteurized milk directly to the consumer off the farm and at farmer’s markets.

The former law only allowed direct-to-consumer sales on the farm where the milk was produced. Tier-2 producers were able to deliver raw milk to farmer’s markets, but only if the sale and financing had been set up beforehand.

Utah also expanded raw milk sales in the 2020 legislative session. The new law allows permit holders to sell raw milk cream and butter. The former law only allowed the sale of pure raw milk even by those holding a permit.

Currently, 13 states allow raw milk sales in retail stores and 17 states allow sales only on the farm where the milk was produced. Nine states have legalized herd-share agreements.

State Right to Try laws create a process to bypass the FDA rules and allow some patients to obtain experimental drugs from manufacturers without first obtaining federal approval. By the end of the 2018 legislative season, 41 states had implemented Right to Try.

With most of the country already offering the right to try under state law, Congress passed its own limited version of the legislation in 2018.

Now states are looking for ways to expand the concept despite ongoing FDA restrictions.

Louisiana successfully expanded its Right to Try law. In 2017, the state included robotic technology that assists patients suffering from terminal degenerative muscular diseases with mobility in its Right to Try statute. The law is specifically meant to allow ALS patients in the state to access EyeDrive technology that allows them to maneuver a wheelchair using eye movements.

The technology is currently unavailable on the market because it’s still in the FDA trial phase. Passage of HB179 opens the door for all ALS patients in the state to bypass the FDA and access this potentially far-reaching technology.

Last year, North Carolina expanded its Right to Try law as well.  The expanded provisions allow certain patients to access stem cell treatments not yet given final approval by the FDA.

This is an overview of recent state efforts to nullify unconstitutional FDA actions in effect. To get more details on state efforts to undermine the FDA’s unconstitutional regulation of food, medicine and healthcare, along with other federal agencies and programs, make sure you read our latest State of the Nullification Movement report. You can download it for free HERE. 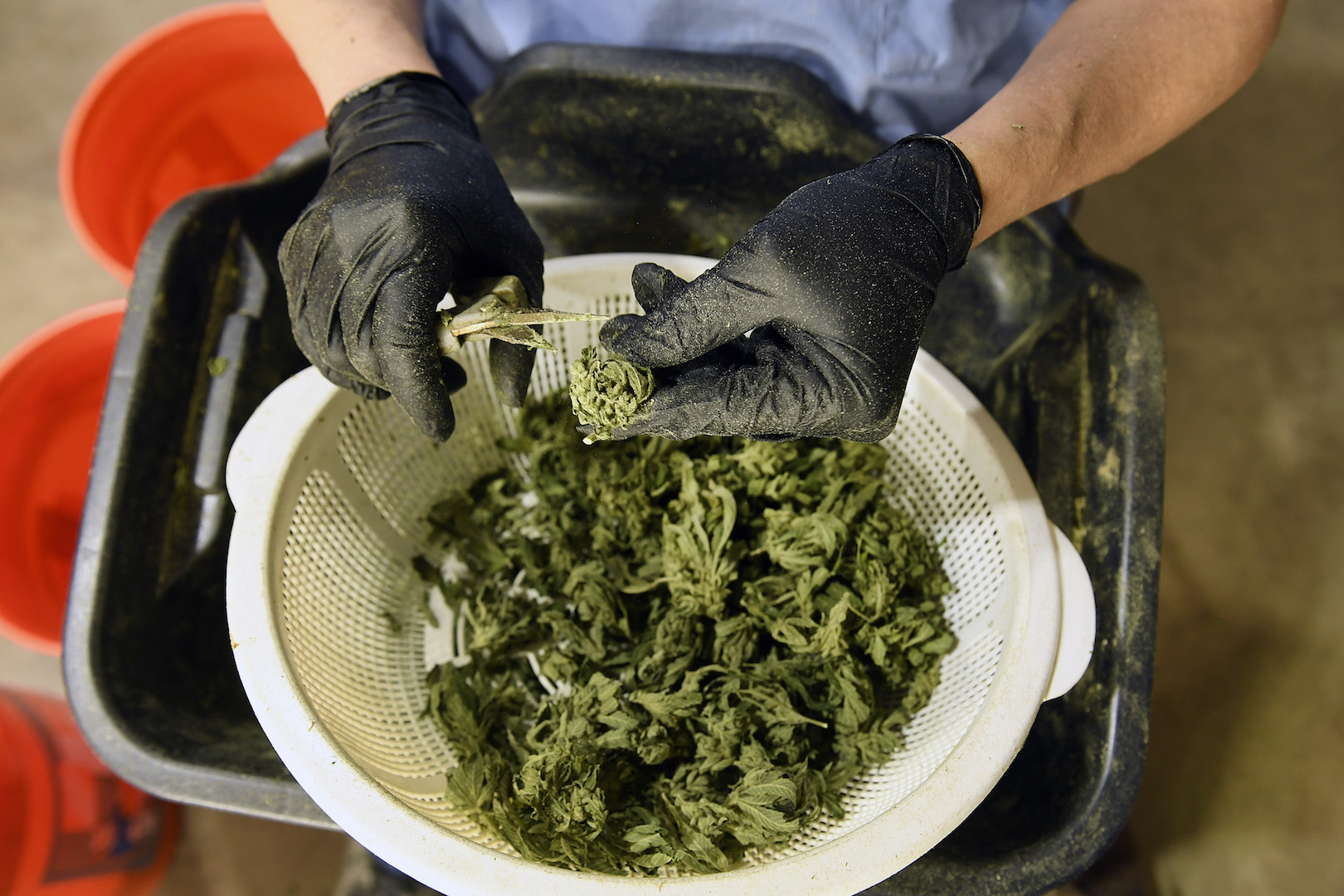 Colorado State University is launching a cannabis degree program aimed at meeting the demand for experts as legalized cannabis becomes more commonplace across the United States, according to the Associated Press.

The new Cannabis, Biology and Chemistry program at CSU will be similar to a double-major in biology and chemistry, with some specific emphases on analyzing cannabis.

“It’s a rigorous degree geared toward the increasing demand coming about because of the cannabis industry,” College of Science and Mathematics dean David Lehmpuhl told the AP. “Hemp and marijuana has really come to the forefront in a lot of economic sectors in the country. We’re not pro-cannabis or anti-cannabis. What we’re about will be the science, and training students to look at that science.”

The natural products coursework would place students in a lab setting to learn about the genetics of cannabis or other plants with additional courses in neurobiology, biochemistry and genetics, university officials said.

The analytical chemistry coursework would also place students in a lab setting to learn about the chemical compounds, such as determining what kind of cannabidiol concentration should exist in a product, university officials said.

Marijuana is fully legal — both recreationally and medicinally — in 11 states. It is fully illegal in just eight states, with all other states carrying mixed legal status allowing for varying levels of medicinal use, and some having decriminalized the substance to different degrees.

Colorado legalized marijuana in 2014, and has since generated more than $1 billion in revenue from the industry.

When marijuana is legalized to any degree in a state, there comes a rush of would-be entrepreneurs seeking licenses to open dispensaries, as well as a need for pharmacies and qualified pharmacists to run them. Also, experts are needed to handle research and production of legal marijuana that meets whatever state guidelines apply.

The university had previously established the Institute of Cannabis Research in 2016 at its Pueblo campus, where the new cannabis degree program will be. The campus had a minor program in cannabis studies.