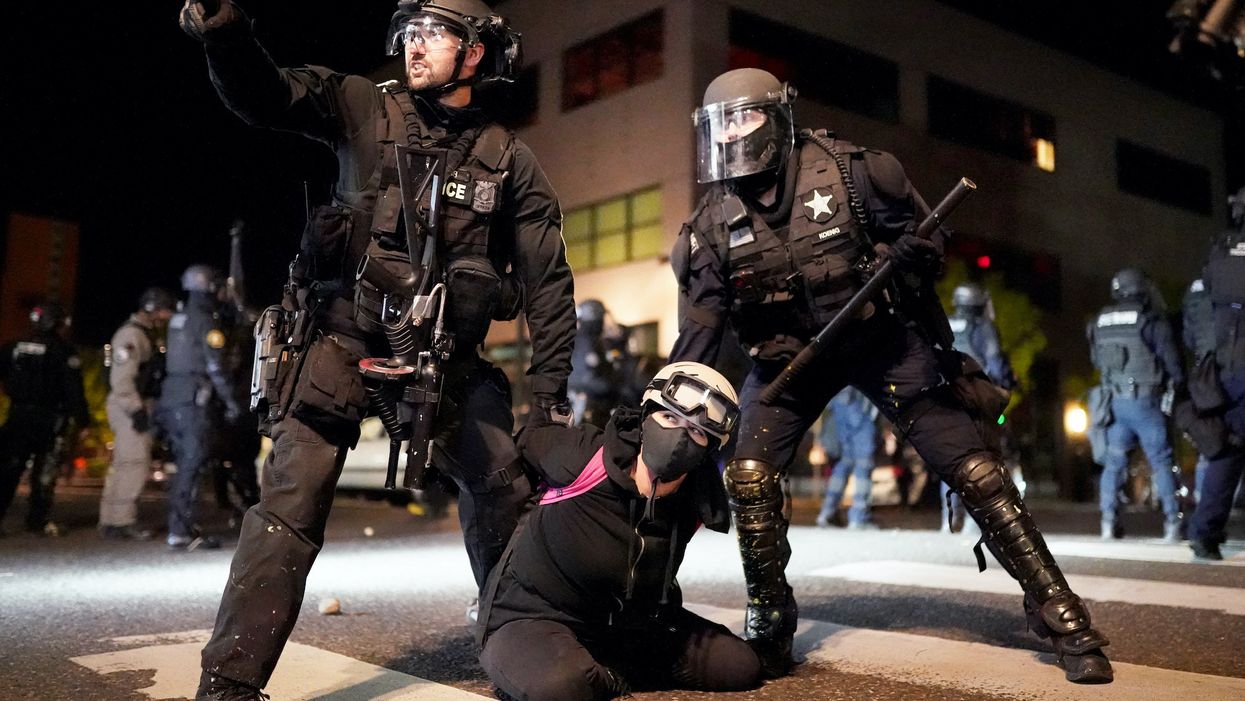 Multnomah County District Attorney Mike Schmidt announced that his office would decline to press charges against protesters and rioters in the demonstrations in Portland, Oregon.

Schmidt made the announcement Tuesday at his first media briefing since assuming the office on Aug. 1.

Schmidt said in his statement that the policy change was intended to make society more equable.

“If we leverage the full force of the criminal justice system on individuals who are peacefully protesting and demanding to be heard, we will cause irreparable harm to them individually and to our society,” he said.

“The Multnomah County District Attorney’s Office will presumptively decline to prosecute a case where the most serious offense is a city ordinance violation or where the crime(s) do not involve deliberate property damage, theft or the use or threat of force against another person,” Schmidt explained.

The statement included a list of offenses from protesters that the office would decline to prosecute. The offenses that will be ignored included the following, according to KGW-TV:

“As prosecutors, we acknowledge the depth of emotion that motivates these demonstrations and support those who are civically engaged through peaceful protesting. We will undermine public safety, not promote it, if we do not take action to bring about immediate change,” Schmidt added.

On Friday, Portland Police Association President Daryl Turner sent a scathing letter demanding that Schmidt focus his efforts on stopping crime instead of criticizing the police.

You ran on a platform of police accountability, which was a thinly veiled threat to indict police officers. What about indicting rioters who loot, burn, destroy, and assault? What about your ethical and moral duties to uphold the law and keep all our citizens safe? The people committing arson and assault are not peaceful protestors; they are criminals. Step up and do your job; hold the rioters accountable. If there is no consequence for crimes from the District Attorney’s office, there is no reason for criminals to stop the chaos.

“I am disgusted that our City has come to this,” he added.

“Effectively prosecuting people for exercising their right to express their views does not serve the people of Multnomah County,” the Resource Center tweeted.

Here’s more about the stunning announcement: 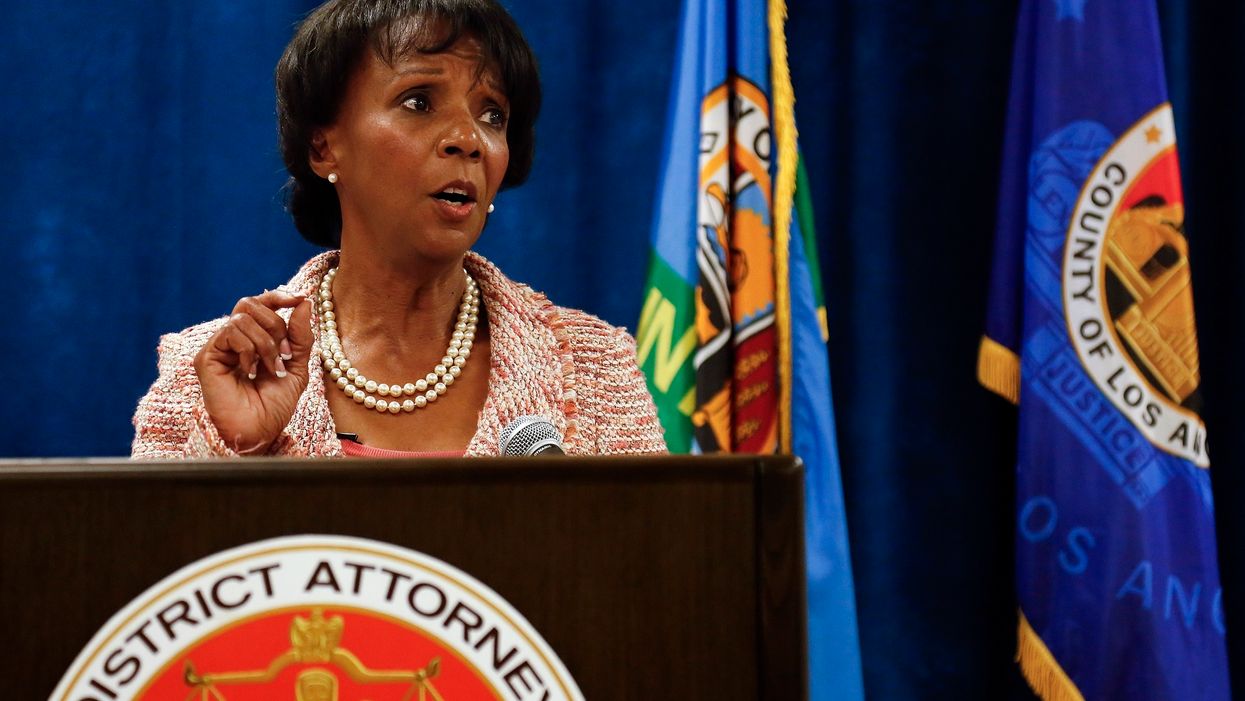 The husband of Los Angeles County’s first black district attorney has been hit with three charges of assault with a firearm stemming from him pulling a gun when an estimated 30 Black Lives Matter activists showed up at the couple’s home demanding to see his wife earlier this year.

The Los Angeles Times reported that David Lacey, husband of L.A. county chief prosecutor Jackie Lacey, was charged by the California attorney general’s office over an incident in early March where he was recorded on video brandishing a gun at protestors who showed up on his front porch calling for a meeting with his wife.

On March 2, a Black Lives Matter representative named Melina Abdullah rang the doorbell of the Lacey household, and Mr. Lacey came to the door. He is seen pointing a gun during the confrontation, telling the activists to get off his porch and warning them that he was prepared to shoot them.

Mrs. Lacey later said that her husband was “profoundly sorry” for the exchange, adding, “I do not believe it is fair or right for protestors to show up at the homes of people who dedicate their lives to public service. It was just him and I in that house and we really didn’t know what was about to happen.”

In an interview released by CNN last month, Mrs. Lacey condemned the radical views pushed by some Black Lives Matters activists, including the defunding of police.

The Hill reported that following the news of Mr. Lacey’s criminal charges, his attorney, Samuel Tyre said in a statement that he was “disappointed” that his client’s actions were considered “criminal behavior.”

“We disagree entirely with their assessment,” Tyre argued, adding, “but we have the utmost faith in the justice system, and we are confident that the correct result will be reached.”

Mr. Lacey’s case has similarities to another case happening in the middle of the country which also involves a couple defending their home against protesters.

The BLM movement gained an enormous boost following the death of George Floyd in late May — two months after the incident at the Lacey household. The movement has since been joined and allegedly hijacked by affiliated groups in protests across the country, with demonstrations descending into violence, looting, and even murders.

A St. Louis couple, the McCloskeys — both of whom are attorneys — were charged last month for bringing out firearms to confront protesters who had broken down the gate to their gated community and allegedly threatened their lives.

The McCloskeys’ attorney, Joel Schwartz, released a statement at the time, saying, “I, along with my clients, support the First Amendment right of every citizen to have their voice and opinion heard. This right, however, must be balanced with the Second Amendment and Missouri law, which entitle each of us to protect our home and family from potential threats.” 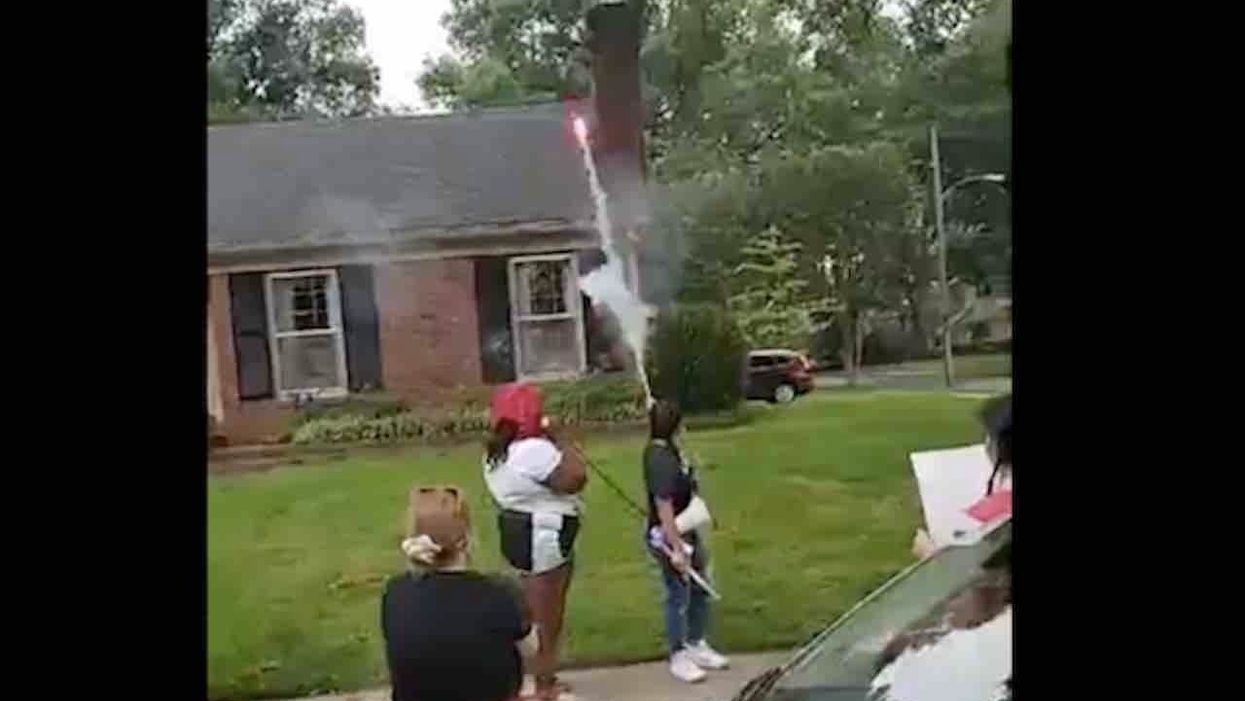 Protesters shot fireworks toward the East Memphis, Tennessee, home of Shelby County District Attorney Amy Weirich on Saturday, blocked several streets with their vehicles, removed American flags from Weirich’s front lawn, and set a U.S. flag on fire — and the whole Independence Day episode was documented on now-deleted video that a protester livestreamed on Facebook.

Several dozen protesters drove in a caravan of about 25 cars into Weirich’s neighborhood, the Commercial Appeal reported, and called for Weirich to be fired around 5:30 p.m.

The protester who livestreamed the “F*** Yo Fourth” demonstration, Keedran Franklin, complained on video about Weirich’s record and said she isn’t fair to people of color compared to white people. 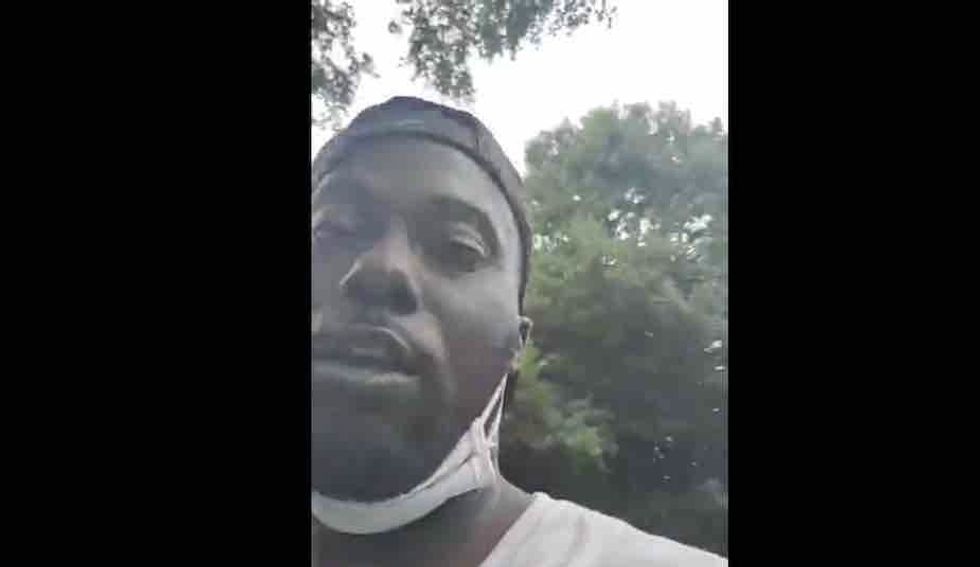 Once protesters were gathered in front of Weirich’s home, Franklin called for streets to be blocked off and said — apparently in reference to motorists — “They’re gonna have to talk to our marshals if they wanna get by.” A kid on a bicycle riding down the sidewalk was part of the scenery: 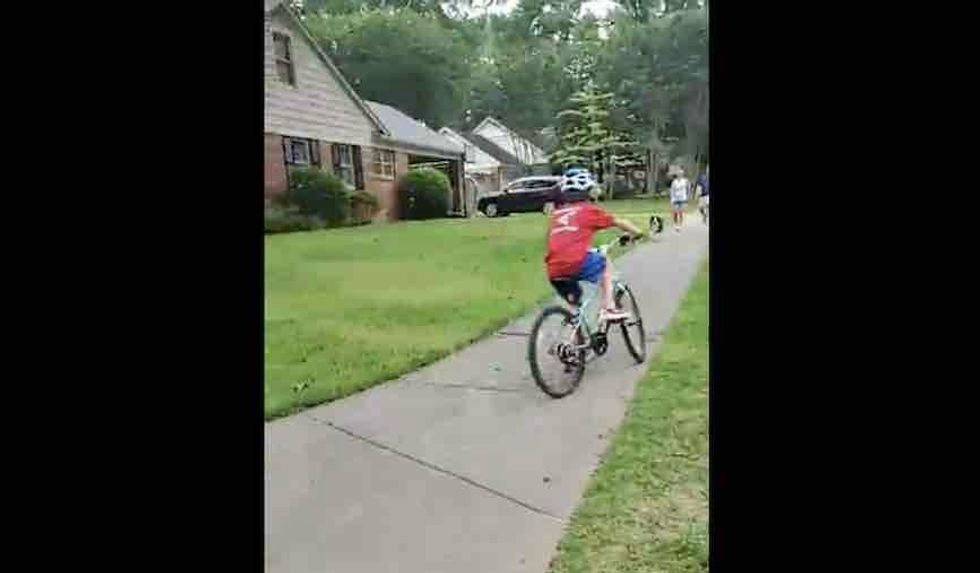 The protest seemed well organized, as a man dressed in an orange vest was seen speaking apparently into a walkie-talkie and trying to figure out “where we need the rest of the team.” 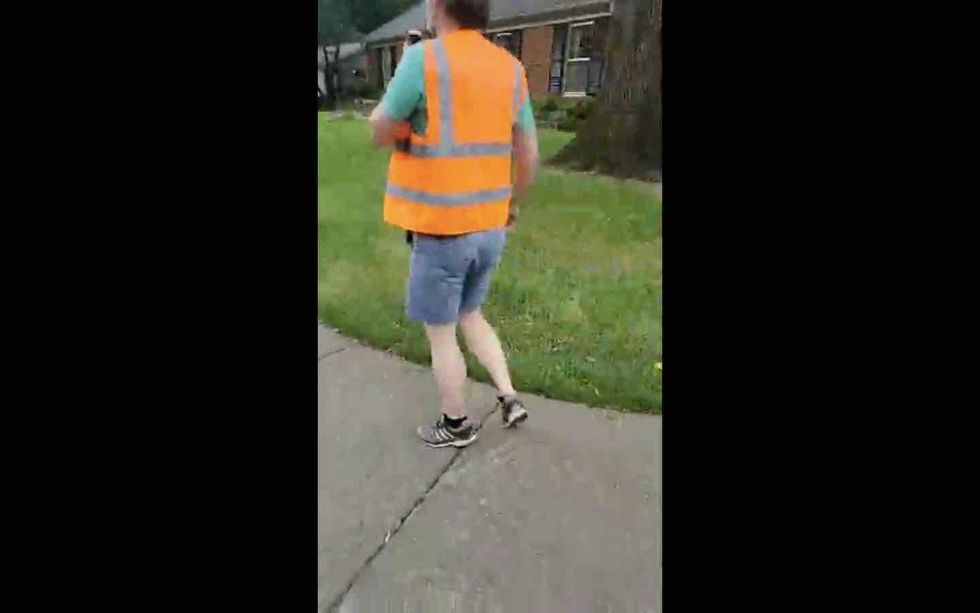 The Commercial Appeal said protesters “set off about 10 small firecrackers outside the house” — but video caught them actually shooting fireworks toward Weirich’s home, seemingly over the roof. 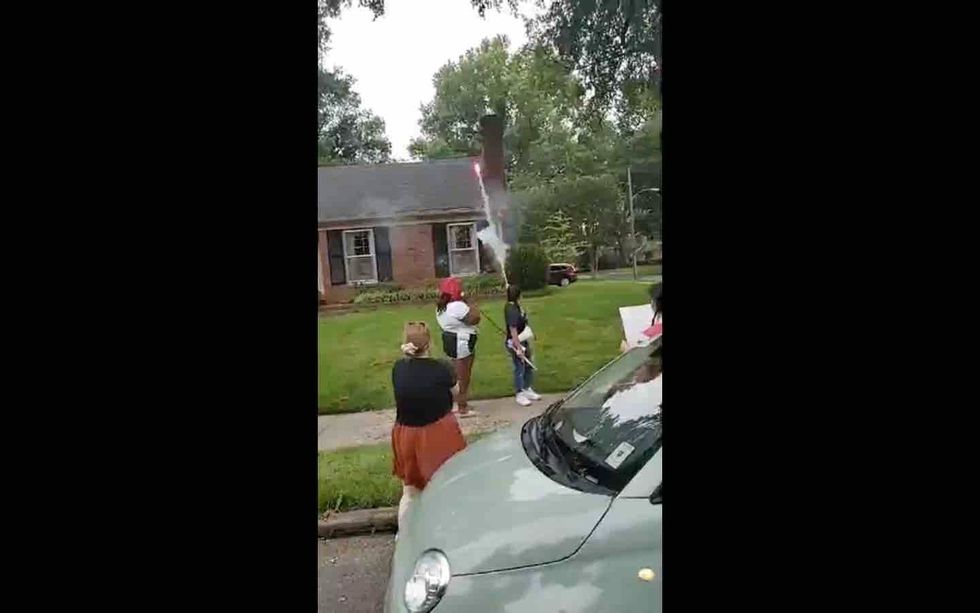 Franklin ordered his comrades not to film the fireworks being shot toward the home and at one point in the video turned the camera away and said “video can make things look different.” 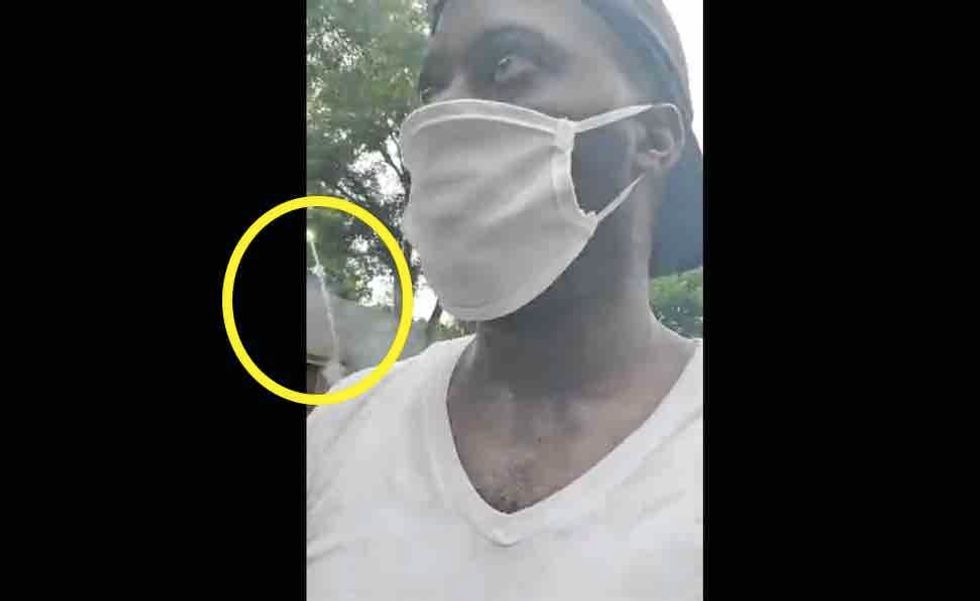 One protester dressed in a red head covering got on a megaphone and told fellow protesters, “If y’all see me run, just get in the cars … y’all know me: I love goin’ up on cops and s**t, but I got fireworks in my hand!” 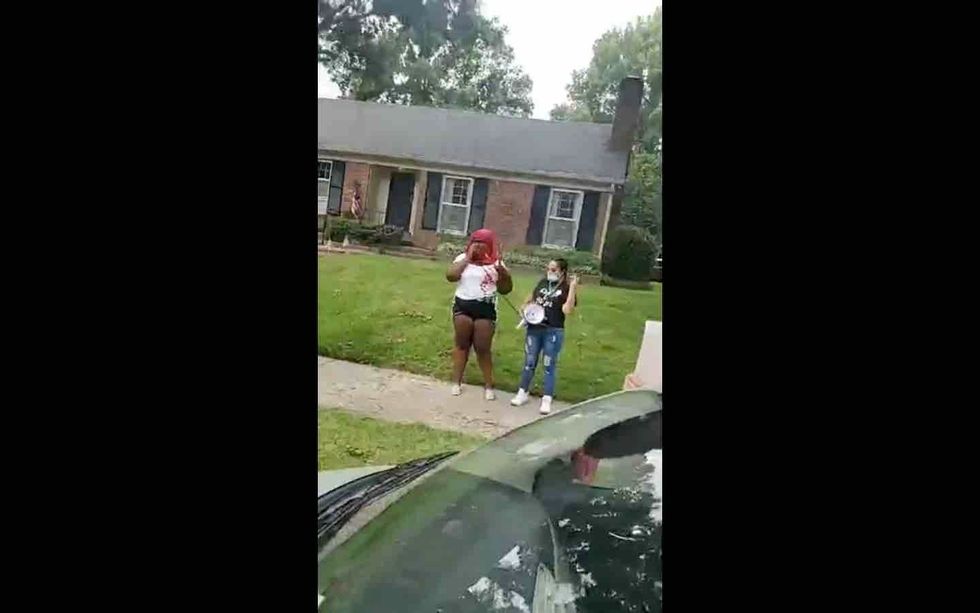 Later she was seen apparently shooting fireworks toward the home: 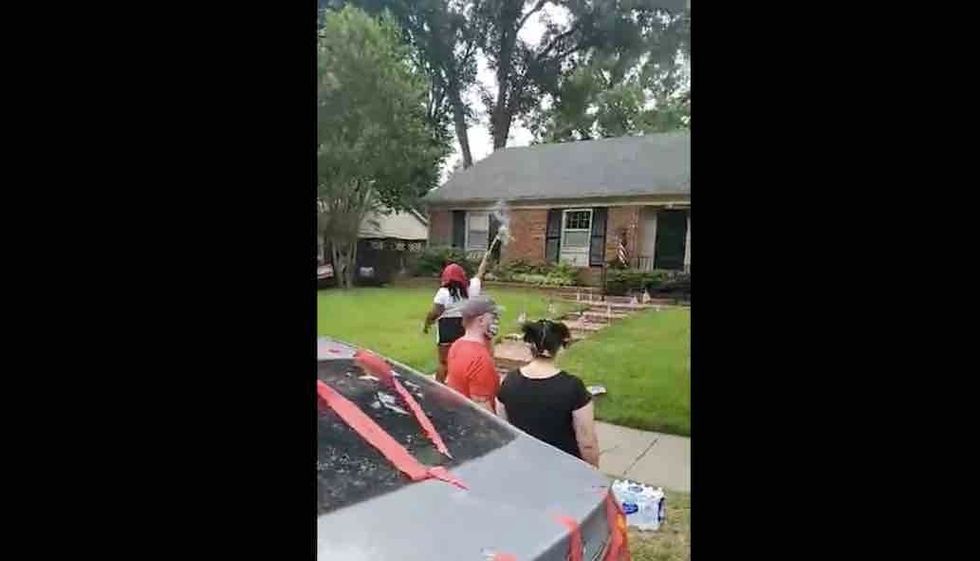 Soon an American flag was on fire as protesters stood on the sidewalk: 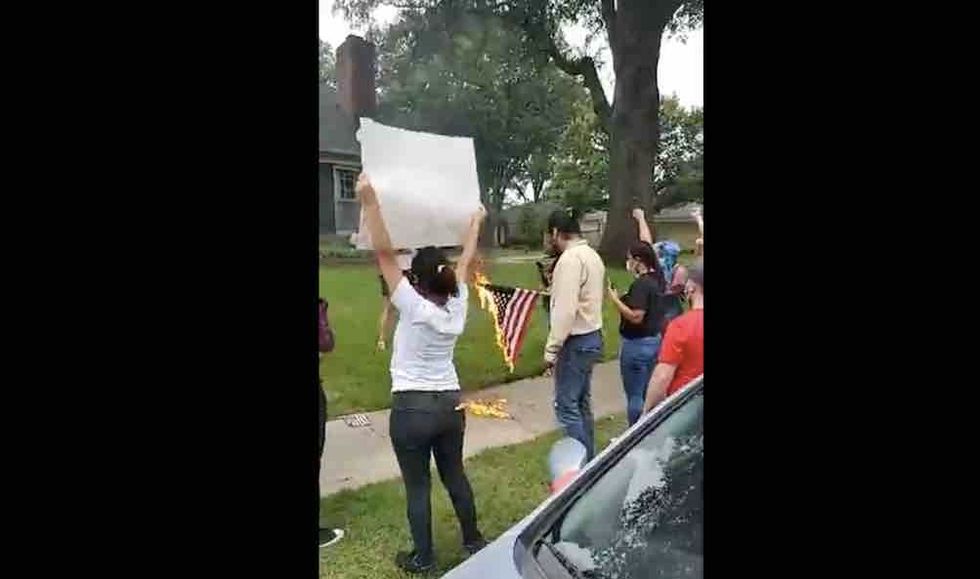 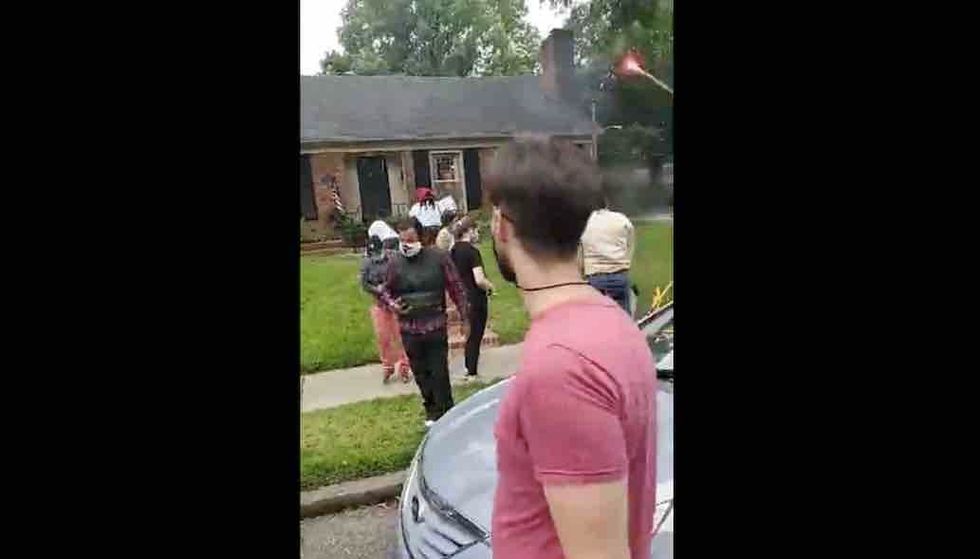 But when protesters apparently got word that police were on their way, they ran to their cars and took off: 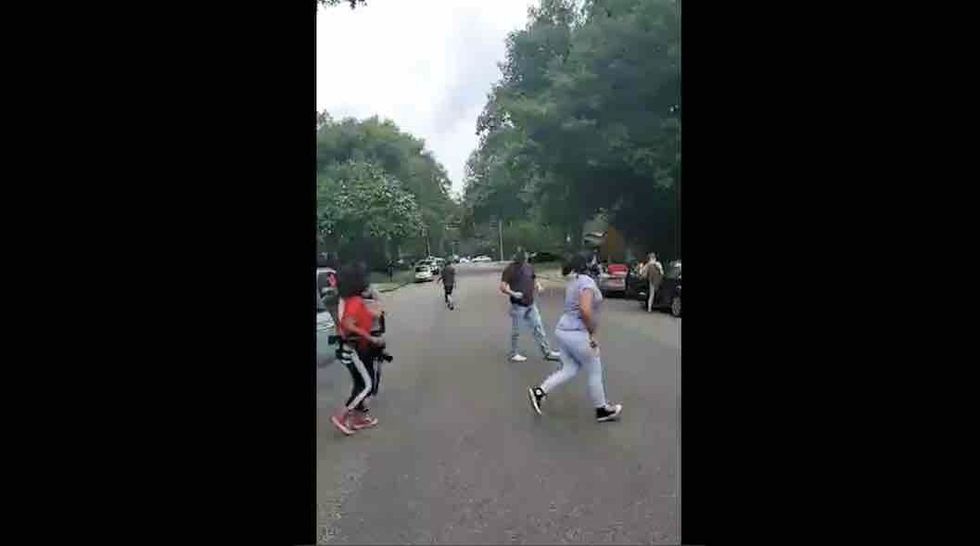 Weirich did not come outside her home during the protest, the Commercial Appeal reported — but her neighbor did and appeared to give one protester a little talking-to: 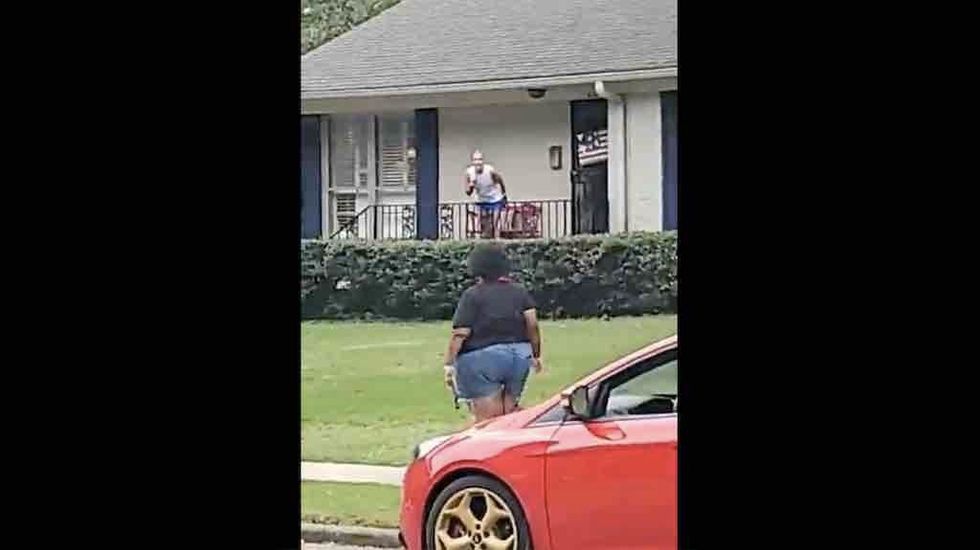 Here’s a short clip of the nearly half-hour protest, taken from another angle, which also shows a pair of protesters shooting fireworks over Weirich’s roof. (Content warning: Language):

The Commercial Appeal said the protesters also want people who have not been convicted of crimes released from jail due to COVID-19 risks — and for land to be returned to Chickasaw, Quapaw, Choctow, and Creek nations.

The paper said it reached out to Weirich’s office for comment but didn’t say if there was a response.

More from the Commercial Appeal:

She has held the position since January 2011 when then-Gov. Bill Haslam appointed her as Shelby County’s first female district attorney. She succeeded Bill Gibbons, who left to head the state Department of Safety.

During her tenure, she has come under fire for
not filing any charges against officers who shot Martavious Banks and for a Harvard Law School project that ranked her highest in Tennessee for prosecutorial misconduct. At the time, Weirch refuted the findings of the study. 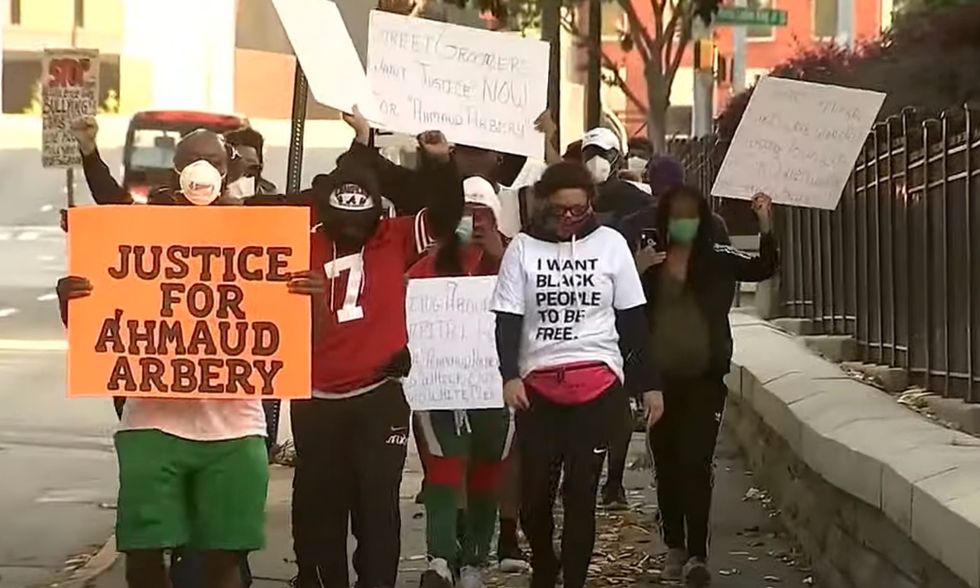 Two of the men seen in a video shooting and killing Ahmaud Arbery in Georgia have been arrested and charged in his murder after a very public outcry after video of the incident was released.

The incident became racially charged because the victim was black and the two men chasing him are white.

Gregory McMichael and his son, Travis McMichael, admit that they chased Arbery on the day of Feb. 23, but said that they believed him to be a burglar that had been robbing homes in their neighborhood.

After Arbery tried to run away, the two men cornered him again and shot him during an altercation. He died at the scene.

Arvery’s family say he was just out jogging for exercise.

The two men were not arrested for two months until a very graphic video was released showing the incident.

On Thursday the Georgia Bureau of Investigation announced that they had arrested both men for the murder of Arbery.

Georgia attorney general Chris Carr released a statement after they were arrested.

“Gregory and Travis McMichael have been arrested this evening for aggravated assault and the murder of Ahmaud Arbery. We are grateful the Georgia Bureau of investigation has taken quick and decisive action,” the statement read.

“This tragedy cannot be undone, but this is the first step in what I am confident will be a swift road to justice,” he added.

Here’s more about the lethal incident:


Protests continue for justice in Ahmaud Arbery’s killing in Georgia