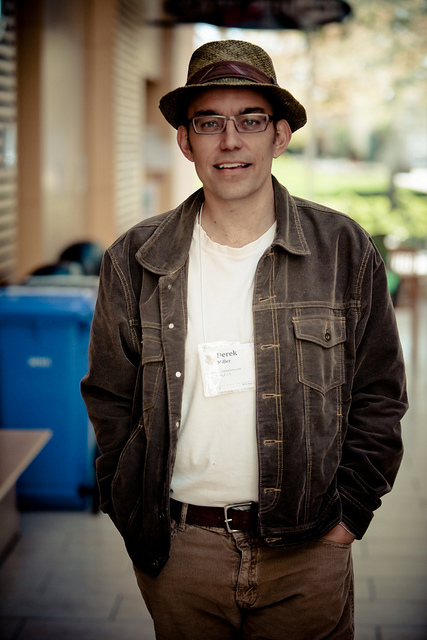 Derek K. Miller was an incredible man. He blogged his way through stage 4 metastic colorectal cancer. He coined the term “digital executor” in 2008. He was a father, husband, musician, podcaster, photographer, writer and inquisitive soul.

He blogged for more than 10 years, leaving behind a gift for us all. His children, Lauren (11) and Marina (13), will have an archive of their father’s insights and feelings about the world as a treasured part of their family history.

Derek’s father, Karl, was quoted today in the Vancouver Province newspaper, “He was proud of his blog, and now it is his legacy. It connects him to the world, and to his family, forever. We were there for him, but Derek was comfortable sharing his thoughts with a worldwide community.”

For everyone, but particularly those who are facing death as a result of cancer or other means, his blog shows how he extracted every last drop of joy that he could out of his life before the end. From his final post:

The world, indeed the whole universe, is a beautiful, astonishing, wondrous place. There is always more to find out. I don’t look back and regret anything, and I hope my family can find a way to do the same.

My Interview with Derek K. Miller

I had the great fortune of having a long conversation with Derek about digital legacy, digital identity and technology on May 28, 2010. Despite our intentions at the time, it would be our one and only discussion. He wrote a blog post about our “gabfest” then, which included his thoughts on preparing a digital legacy. I recorded our talk, with his permission, as an alternative to note-taking. When I wrote my post at the time, I promised to write more about the discussion we had. As sometimes happens in life, I didn’t get back to that plan.

As a tribute to Derek and his contribution to the topic of digital legacy and digital executorship, I’ve decided to post the entire unedited conversation here – late beginning, sketchy audio in places, and free-flowing. It’s clear from listening to it again how thoughtful and passionate Derek K. Miller was about technology and the effects that it has on our lives.

I’m feeling a loss today, but am grateful that he did so much to preserve his digital self for all of us to discover and learn from.

Tomorrow is Digital Death Day in Mountain View, CA. In our interview, we discussed last year’s event and I hope that Derek’s contributions to our burgeoning field are remembered there tomorrow.

My condolences to his wife Airdrie, Marina, Lauren and the rest of his family and loved ones.

Thanks to Dave Delaney who, while mourning the loss of his friend, volunteered to help me get this audio online.

Are you interested in the conversation around digital death? Do you want to learn more about family access to accounts after a death, legal issues like terms of service and digital property rights, or archival and curation of data? What about the individual’s right to delete data and declare themselves digitally dead?

Now’s your chance to get involved.

Digital Death Day North America will see 75 – 125 attorneys, entrepreneurs, researchers, archivists and leading minds gather to discuss the issues shaping this emerging space. Add your voice to the group and share your ideas on how the future could be, and your perspective on what’s important.

Digital Death Day is a collaborative unconference where attendees will work together to explore how we should deal with our online profiles after death. This is the 3rd Digital Death Day and the 2nd such event in North America. The event immediately follows the 12th Internet Identity Workshop planned for May 3-5 at the same location.

The unconference format allows for an agile event, where everyone is welcome to contribute. Beginning at 9:00 AM we start with a blank wall and though an hour-long, interactive process, create a full day, multi-track conference agenda that is relevant and inspiring to everyone in attendance. Digital Death Day will be facilitated by Kaliya Hamlin who has designed and facilitated over 100 unconferences for professional and technical communities.

If you are an entrepreneur, Internet service professional, attorney, estate planner, researcher, technologist, archivist, policy maker, funeral director, a member of the media, or planning your digital will, your perspective and participation is needed an valuable.