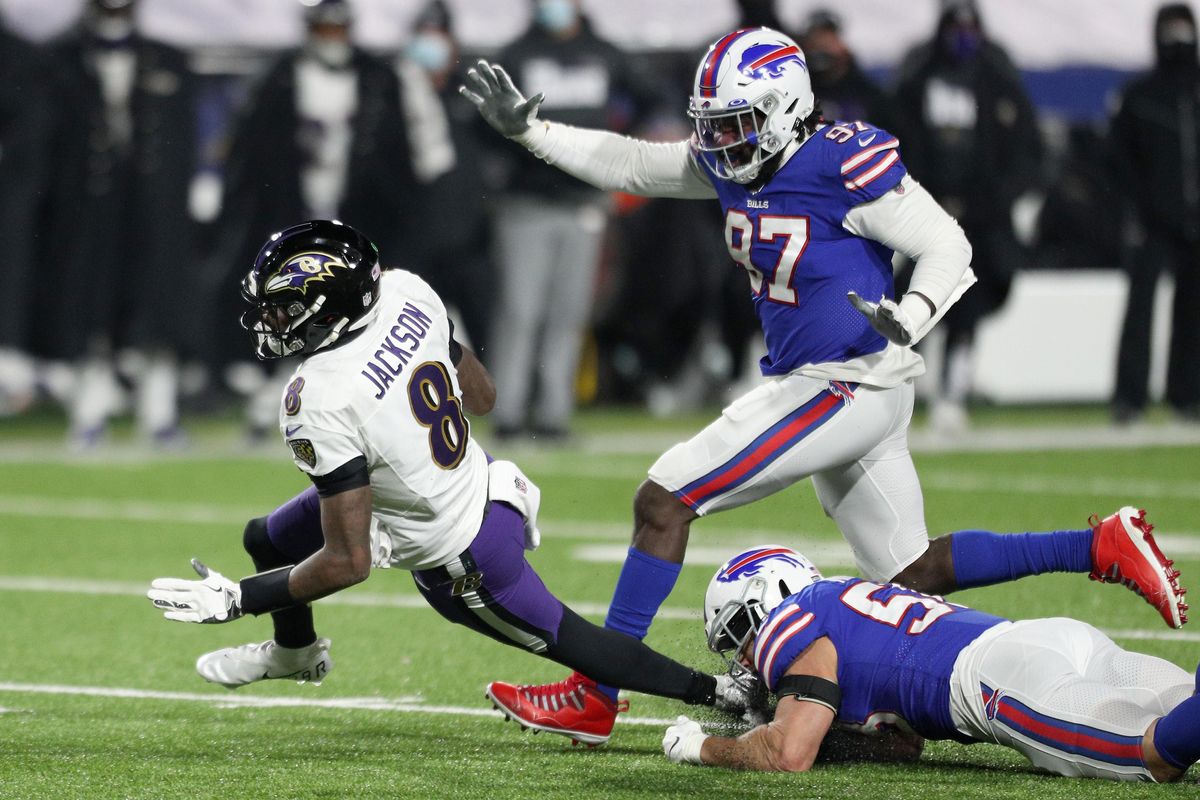 On Saturday, the Buffalo Bills met the Baltimore Ravens in western New York, facing off for their divisional playoff game. In the second half, Ravens quarterback Lamar Jackson was forced to leave the game after sustaining an injury that triggered the NFL’s concussion protocol.

Presented with the fact that the star player of the only team standing in the way of the Buffalo Bills returning to the AFC Championship Game for the first time since 1994 was now out of the game, Bills fans responded by rallying to raise money for Jackson’s favorite charity, “Blessings in a Backpack.” After the game ended, with Buffalo winning 17-3, charitable donations from the “Bills Mafia” came pouring into the organization, which provides food for needy elementary school children across America.

“It started around 11:30 last night, and our donation box just started flooding with donations from Bills fans for Lamar. It’s just been overwhelming — in the best possible way,” Blessings in a Backpack’s Nikki Grizzle told ESPN.

Bills fans posted to social media encouraging others to donate $8 or more to the charity in honor of Jackson, who wears number 8, wishing him a speedy recovery as well.

Class act: #BillsMafia donating to one of Lamar Jackson’s favorite charities overnight, after he left the AFC divis… https://t.co/kriz8acejQ

As the donations from #BillsMafia approach $300k, I just want to thank everyone who has donated to @BlessinBackpack… https://t.co/ZfX1QAf4aW

The Baltimore Ravens acknowledged the Bills Mafia for their magnanimity in victory.

Bills fans are earning a reputation for their generous giving. Last November, Bills quarterback Josh Allen learned that his paternal grandmother Patricia Allen had died suddenly, the day before the Bills were set to play against the Seattle Seahawks. Buffalo head coach Sean McDermott gave Allen the opportunity to sit out the game to grieve, but Allen instead elected to keep playing and led the team to a 44-34 victory over Seattle, throwing for 415 yards and three touchdowns.

After Allen’s outstanding performance, the Bills Mafia launched a fundraising campaign for the John R. Oishei Children’s Hospital in Buffalo, donating in Patricia’s name. Many fans donated in increments of $17, honoring Allen’s jersey number, and since November over $1 million has been donated to the hospital.

Grizzle summarized the charity of the Bills Mafia with a single word.

“Amazing,” she said. “And it just keeps rolling in.”

On Sunday Jan. 24, the Buffalo Bills will play against 2020 Super Bowl champions the Kansas City Chiefs for the AFC Championship and the right to travel to Tampa for Super Bowl LV. 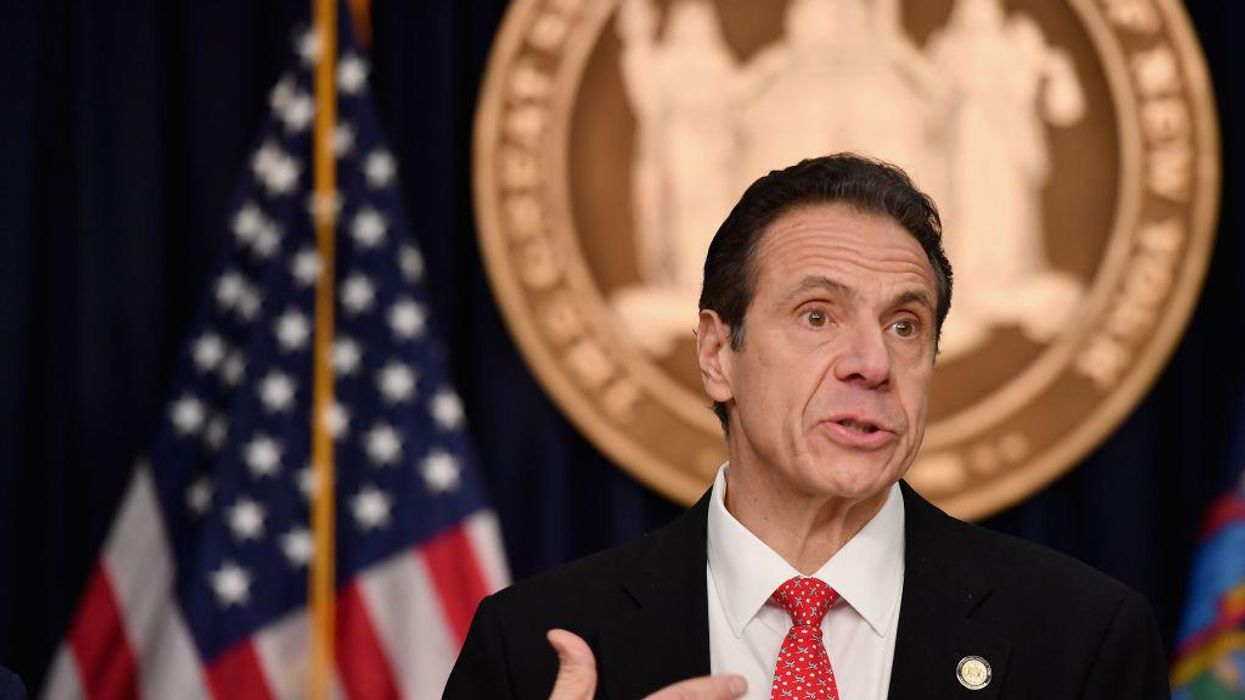 Democratic New York Gov. Andrew Cuomo’s lockdown edicts didn’t allow for a single Buffalo Bills fan to attend a game all season, and now tens of thousands of fans are demanding that the governor be banned from the stadium for the playoffs.

The Bills capped off a historic season last Sunday by trouncing the Miami Dolphins 56-26 to complete a sweep of their division for the first time ever and secure a No. 2 seed for the AFC playoffs, but sadly, at no point during the regular season were fans allowed to watch from inside the stadium.

All season long, stringent health guidelines from the state prevented fans from entering the stadium for fear of spreading the coronavirus. Despite persistent urging from fans, both Gov. Cuomo and New York State Health Commissioner Howard Zucker never budged. That is, until the playoffs rolled around.

Last week, the state finally granted permission for the team to host 6,772 fans — or just under 10% capacity — for its home Wild Card game on Saturday against the Indianapolis Colts. Fans permitted entry will be required to wear masks and socially distance during the game as well as test negative for COVID-19 prior to coming and at their own expense.

It’s the team’s first home postseason game in 25 years, and one fan who plans to travel across the state to attend the game is Gov. Cuomo.

But upon hearing Cuomo’s plans, one fan launched a Change.org petition to ban the governor from entering the stadium, arguing that die-hard fans who have been rooting for the team for decades have a greater right to attend than he does.

“So Cuomo is going to attend our playoff game after telling us that we can only attend at less than 10% capacity?” petition creator Jeffrey Dorenzo wrote. “If he thinks he has more right to a seat in that stadium over people who have waited over 20 years for this opportunity, then people better be there to protest his entry. This is OUR team! This is OUR home. We don’t want you here.”

The petition, created seven days ago, has steadily picked up steam and as of Wednesday morning boasted nearly 40,000 signatures.

While a popular petition doesn’t have the power to actually ban Cuomo from games, it certainly does send a message to the governor about the Western New York community’s feelings toward his lockdown measures.

In an update posted Wednesday on the petition web page, titled “A message to Cuomo,” Dorenzo blasts the governor, saying “you’re not even a Bills fan” before laying into him over his handling of the pandemic.

“Lawsuits are popping up left and right because the people have had enough of your crippling effect,” he wrote. “People’s livelihoods are being destroyed. Everything they’ve worked for being taken from them. People tapping into their 401k’s, annuities, investments, retirements, and savings to make ends meet,” he wrote. “But you know who isn’t struggling? Andrew Cuomo!”

On Sunday, the Buffalo Bills put an absolute beatdown on the Denver Broncos at Mile High Stadium to clinch the AFC East Division title for the first time in a quarter-century. Upon returning home, the team was greeted by a sea of raucous fans at the airport celebrating the achievement.

Fans in the thousands bundled up and stood in the freezing cold to await the team’s arrival and let them know how much they meant to the community. The scene quickly garnered national attention and, frankly, served as a feel-good story for the whole country.

But on Monday, Erie County Executive Mark Poloncarz, a Democrat, decided to dump a big old bucket of ice water on the party.

During a press conference, after reporters evidently asked Poloncarz one too many questions about the Bills — and whether or not fans would be allowed in the stadium for upcoming playoff games — the disgruntled politician shot back with a sharp message: “Get your priorities straight.”

“If we can get fans in the stadium, great, but our priority should be on reducing the number of cases and deaths in our communities. I announced 60 people died unfortunately in the last few days and most of the questions have been about the Bills,” snapped Poloncarz, who announced at that point that he would not take any more questions about the team, according to WGRZ-TV.

Earlier in the conference, the county executive reportedly expressed disappointment over the fact that so many people chose to gather without properly socially distancing themselves amid a pandemic.

“If somebody in that crowd was sick and they passed it on to other individuals and only increased our rates, they’re only hurting our opportunity to be able to actually put people in the stands. And what would happen if [star quarterback] Josh Allen got COVID?” he said, obviously frustrated.

While Poloncarz’s point is not totally unfounded, he failed to see that in a season of grief, the Bills have supplied the community with something positive to rally around. By scolding fans and reporters for celebrating, he likely won’t win any more supporters, especially in a county obsessed with its football team.

To make matters worse, Poloncarz, though not totally rejecting the notion, expressed doubt about the possibility that fans would be allowed in the stadium this postseason, noting that the positive COVID-19 test rate is higher in the county now than it was before the season began.

His remarks came after Democratic New York Gov. Andrew Cuomo seemed to open the door to the possibility. To the ire of Bills fans, Cuomo has barred fans from the stadium all season, but now he apparently wants to attend a game himself. Ultimately, the decision will be made by New York State Health Commissioner Dr. Howard Zucker.