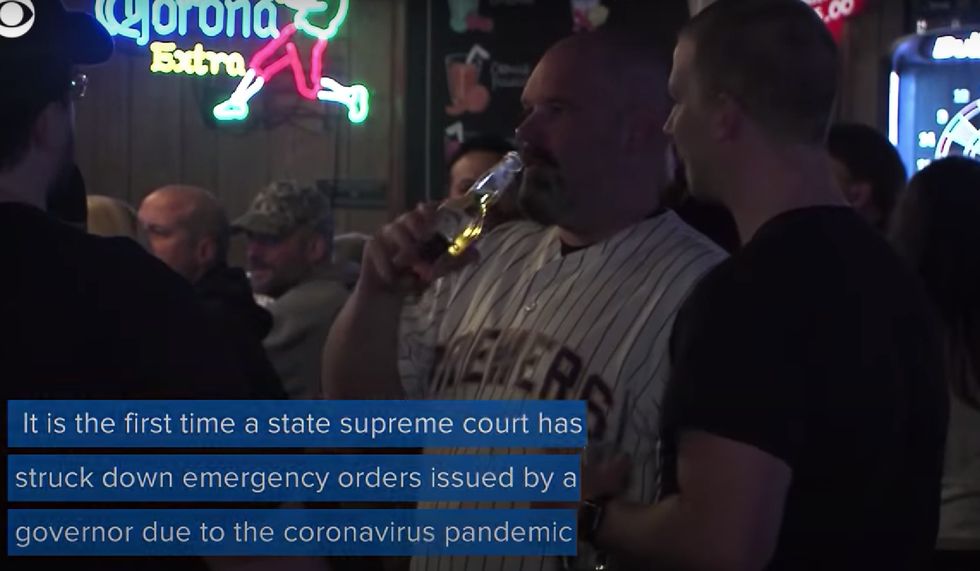 Wisconsin residents flooded the bars on Wednesday night after the state’s Supreme Court struck down the statewide stay-at-home order.

Following the announcement, the Tavern League of Wisconsin told its members to go ahead and “OPEN IMMEDIATELY!”

Nick’s on 2nd in Platteville was just one example. The bar was jammed — standing room only, according to social media and other reports.

The Washington Post’s Meagan Flynn detailed the scene at Nick’s.

“It was sometime after 10 p.m. when ‘Long Cool Woman in a Black Dress’ by the Hollies came over the sound system and a bartender took out his camera,” Flynn wrote. “In a Twitter broadcast, he surveyed the room of maskless patrons crammed together, partying like it was 2019. A few were pounding on the bar to the beat. Some were clapping their hands in the air and some were fist-pumping, a scene so joyous they could have been celebrating the end of the worst pandemic in a century.”

A Twitter photo of the bar went viral following the opening. The Twitter broadcast in question, according to the CBS News, was later deleted after it racked up 60,000 views on the social networking site.

In nearby Port Washington, the Iron Hog Saloon also opened its doors.

‘We have no authority right now’

Wisconsin Gov. Tony Evers (D), however, was not pleased. The state’s “stay at home” order was scheduled through May 26.

“We’re the Wild West,” Evers said during an MSNBC appearance that same night. “There are no restrictions at all across the state of Wisconsin. … So at this point in time … there is nothing that’s compelling people to do anything other than having chaos here.”

Evers added that the lack of instruction on how to handle stay-at-home orders is a problem.

“We have no authority right now,” he said during the MSNBC appearance. “It’s been taken away.”