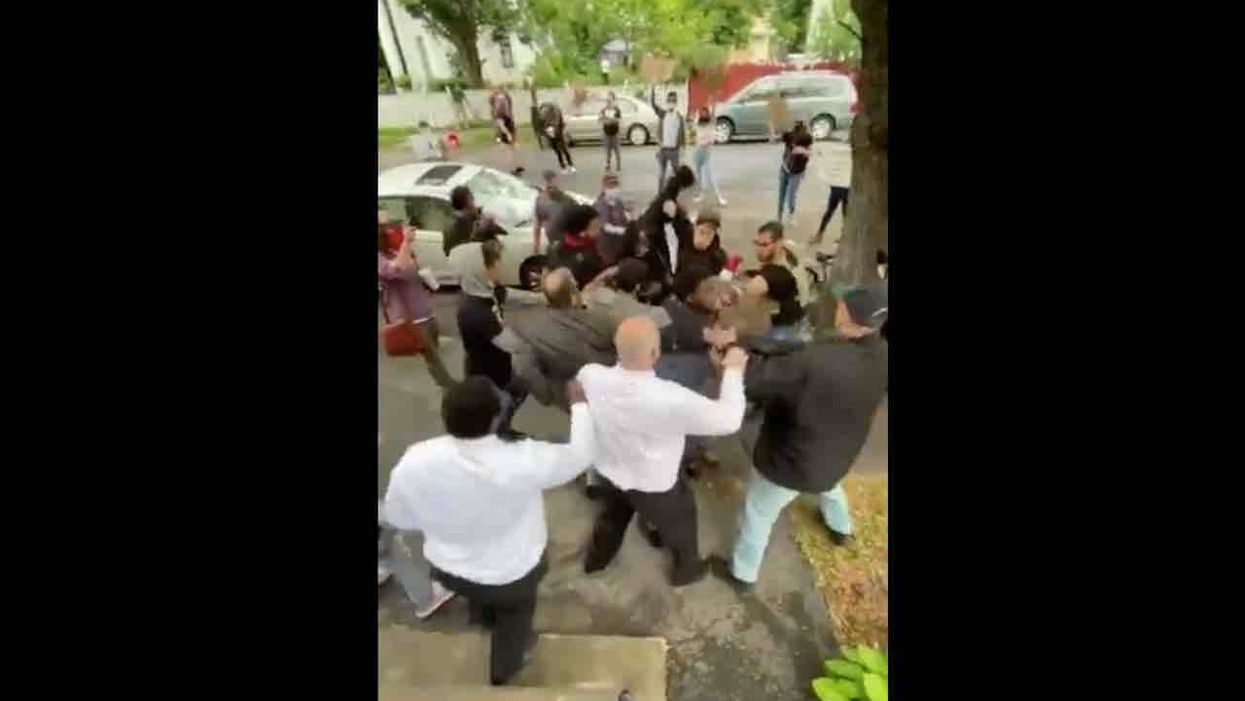 Grace Baptist, led by pastor John Koletas, has given away rifles at least twice before —
in 2014 and again in 2017, the paper reported. The 2014 giveaway was in response to New York’s SAFE Act and stricter gun laws, the Times Union said, adding that the church was set for another giveaway last week.

In response, organizers from regional Black Lives Matter rallies came to protest on June 28 and stood across the street from the church, and protesters and church members yelled back and forth, the paper said, citing a Facebook live video of the event.

But soon protesters were standing on the sidewalk in front of the church steps as people were trying to enter, the Times Union said. At one point a mother with her three young children — including an infant she was holding — weaved through the gathered mob using bullhorns to shout phrases at them such as “this is no house of God!” and “I’m calling [Child Protective Services] on you!”

These young children were more mature than the thugs berating them and their mother as they walked into church.

After the mother and her kids walked into the church, the mob stood face to face with several men from the church and repeatedly chanted into bullhorns, “Save these kids!”

At the end of the clip, one protester hollers, “Save those babies!” — which might make one ponder if he’d yell the same phrase outside Planned Parenthood.

Another video shows black family members having to be escorted into the church as the mob screams at them:

If black lives matter, why did this black family require guards to be escorted into church to be protected from the… https://t.co/ioLlLTMEEB

The Times Union said as Troy police arrived on scene, a brief fight broke out. The paper said it ensued “as congregants tried to push the protesters away from the church.”

Here’s another clip. (Content warning: language). You be the judge as to who the instigators were:

Why is the mob beating church members in Troy, NY for trying to enter church and escort black members through the m… https://t.co/e65n0gtqef

“We aren’t here for violence”…as they pull church members off the steps and punch them in Troy, NY.

Why is the m… https://t.co/tBNyaepQPc

Troy Police Capt. Steven Barker told the paper there were no arrests during the incident.

More from the Times Union:

Later on in the protest a Troy police officer, who stood near the church steps, advised a congregant to not come out and antagonize the protesters by smiling and pointing at them, to which the congregant replied to the officer, “They’re the ones who hate you.” A protester shouted back, “We don’t hate him.” Another protester can then be heard off camera making a threat on the church saying, “Your church is going up in flames tonight.”

Here’s another clip of protesters exiting the Grace Baptist Church sanctuary and scuffling with church members in the lobby. One woman is heard pointing at her arm and getting into the face of one congregant, saying “Look, I’m a Christian preacher, you dumb f***!” It isn’t clear when the incident took place.

Other clips posted by the church paint various shades of context for where their adversaries are apparently coming from:

“There’s devils in there bro” *pointing at GBC …as he walks past an actual devil worshipper who is presumably cas… https://t.co/nqQiT9RxyK

We will never back down from wickedness in Troy, NY! https://t.co/g1WYDmebG9

Here’s a two minute clip of the congregation leaving the church and being harassed by the crowd.

Here’s a clip of the pastor arguing with the mob across the street. (Content warning: language):

Pastor to the mob in Troy, NY:

“We don’t lay down our weapons”

“We are all cursed without Jesus” https://t.co/s6fNOYINeS

And finally, church members offer a rendition of “Amazing Grace” to the angry mob: