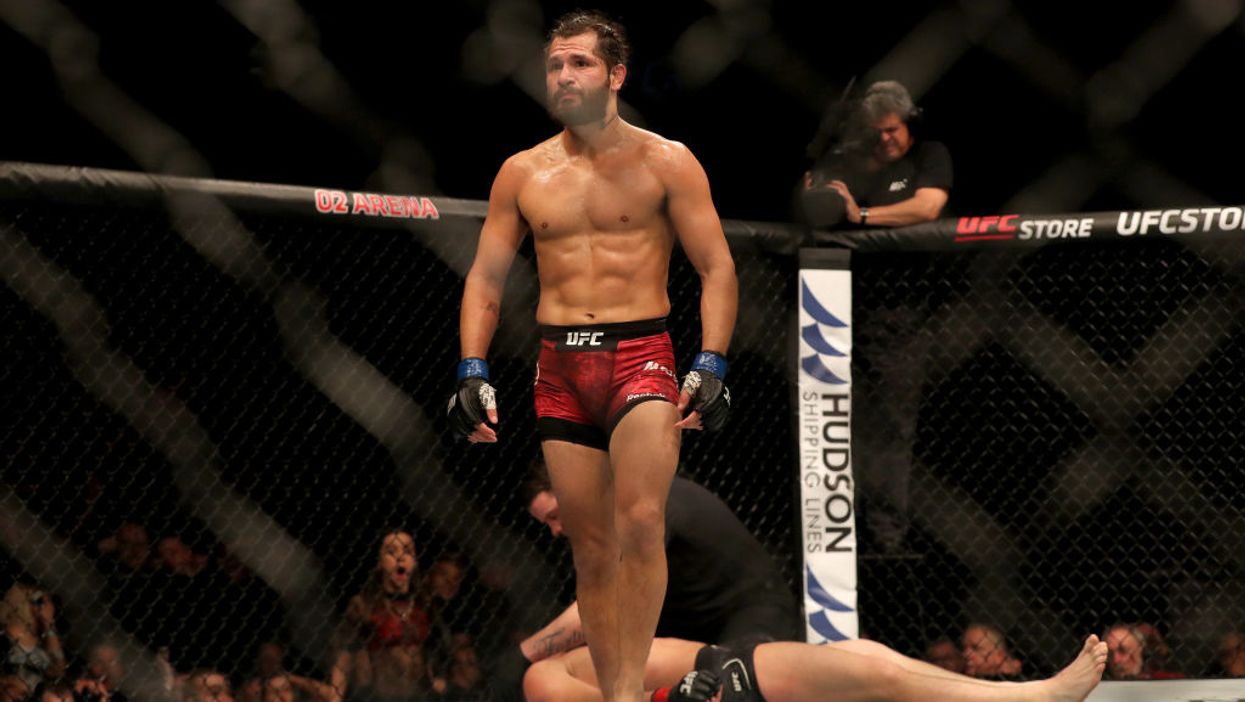 UFC superstar Jorge Masvidal recently called out Democrats for their “false promises” and rallied Latino voters to support President Donald Trump’s re-election in a speech that is now going viral.

Masvidal’s comments came during a stop on the “Fighters Against Socialism” bus tour, which Donald Trump Jr. launched with Masvidal and other Latinos.

What did Masvidal say?

Masvidal, whose father escaped communist Cuba, warned his fellow Latinos that Democrats are attempting to take advantage of them by merely assuming Latinos will vote for Democratic candidates.

“I’m gonna let you in on something,” Masvidal said. “The Democrats just think that they’re entitled to the Latino vote. They think that we just have to hand it over to them. That’s right. We sure as hell don’t.”

The crowd responded with boos.

“You know what else is not gonna work for them? Playing ‘Despacito’ on your cellphone to pander to us,” he added, referring to what Joe Biden did last month in an attempt to curry favor with Latino voters.

“Hell no. You gotta give us some credit for having heads on our shoulders,” Masvidal said, before referring to former President Barack Obama’s infamous phrase, “Elections have consequences.”

“Those words have never been more true than they are today,” Masvidal said. “We either re-elect President Trump and keep America great. Or we let Joe Biden destroy the greatest country the world has ever seen.”

What does the data show?

While Hillary Clinton handily won the Latino vote in 2016 — with the exception of Cubans in Florida — Trump is expected to earn more support from Latinos this year than previous Republican candidates.

Polls of Latino voters are now consistently more favorable for the president than one might expect. In the latest Economist/YouGov poll, 34% of Latino voters favor Trump, with roughly 9% still undecided. At this point, Trump is running well ahead of his own vote share in 2016 (28%), as well as that of Mitt Romney in 2012 (27%) and John McCain in 2008 (31%). It’s still a heavily Democratic vote, but the movement of somewhere between 6% and 15% of Latino voters is potentially significant enough to impact the outcome in states like Florida and North Carolina. The polling has shaken Democrats, who have rapidly expanded their efforts to engage with Latinos over the last month. 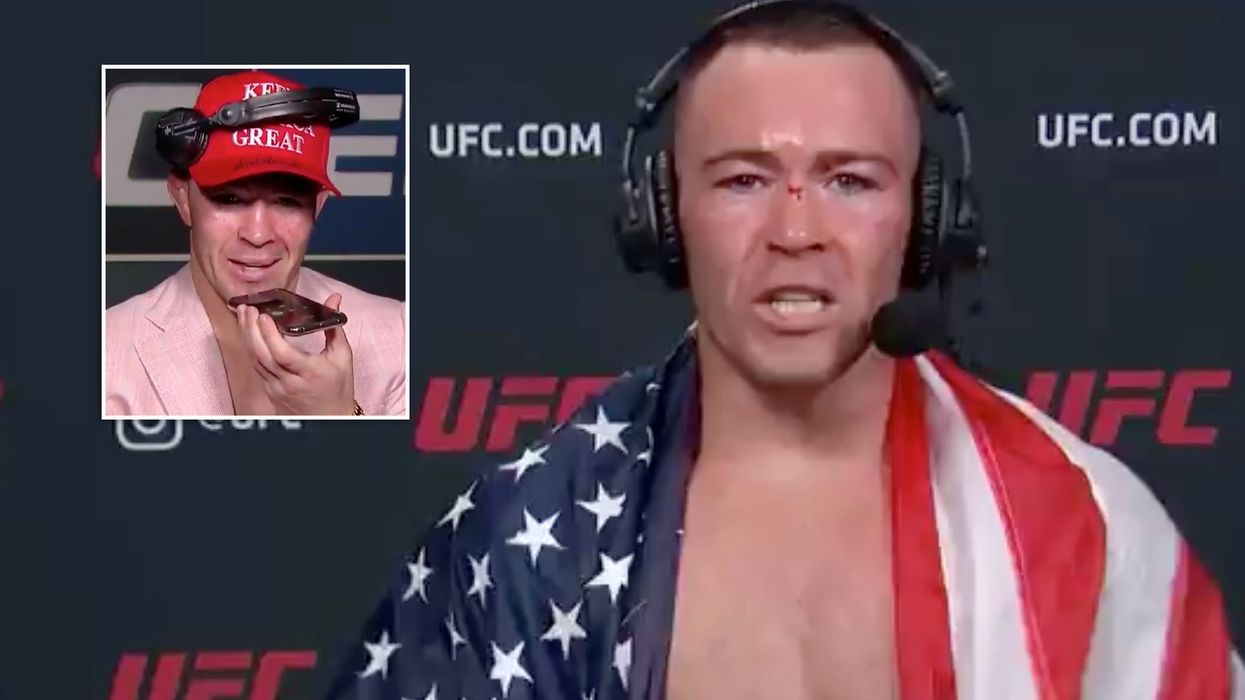 Later, Trump called Covington when he was live on air for another post-victory interview.

What did Covington say?

After Covington’s fight, which he won with a total knockout, the UFC star said “Sleepy Joe” — the nickname the president has mockingly assigned Biden — will get the same result as his opponent this November at the ballot box.

“Ladies and gentleman, the silent majority is ready to make some noise. If you thought that was a beating wait until November 3rd, when Donald Trump gets his hands on Sleepy Joe. That’s gonna be a landslide,” Covington said.

Then Covington showered praise on first responders before taking a shot at NBA star LeBron James and “woke athletes.”

“I want to dedicate this fight to all the first responders, all the military out there,” he said. “This world would not be safe without you guys. You keep us safe and not these woke athletes. I’m sick of these woke athletes and these spineless cowards like LeBron James.”

“Ladies and gentleman, the silent majority is ready to make some noise. If you thought that was a beating… https://t.co/txsEzlGccq

Covington replied, “Thank you so much, Mr. President. You gave me the dragon energy when you shook my hand on Sunday at your rally. It doesn’t matter if King Kong was in front of me, I was not going to lose after getting to shake your hand.”

The UFC star added that it did not matter who he fought, no one could stop him from winning after having met Trump personally.

“I’m proud of you man, I’m a big fan and I’m proud of you,” Trump responded. “You’re tough, you’re tough, you have the right spirit. So, now go win the next one, and just keep it for a long time, right? Just keep that championship for a long time. But you are something…I appreciated the shout-out tonight, too. I’m your fan, you’re my fan. Two of a kind, two of a kind.”

Trump literally just called him while he was on the post-show OMG https://t.co/uwTZebkUgK 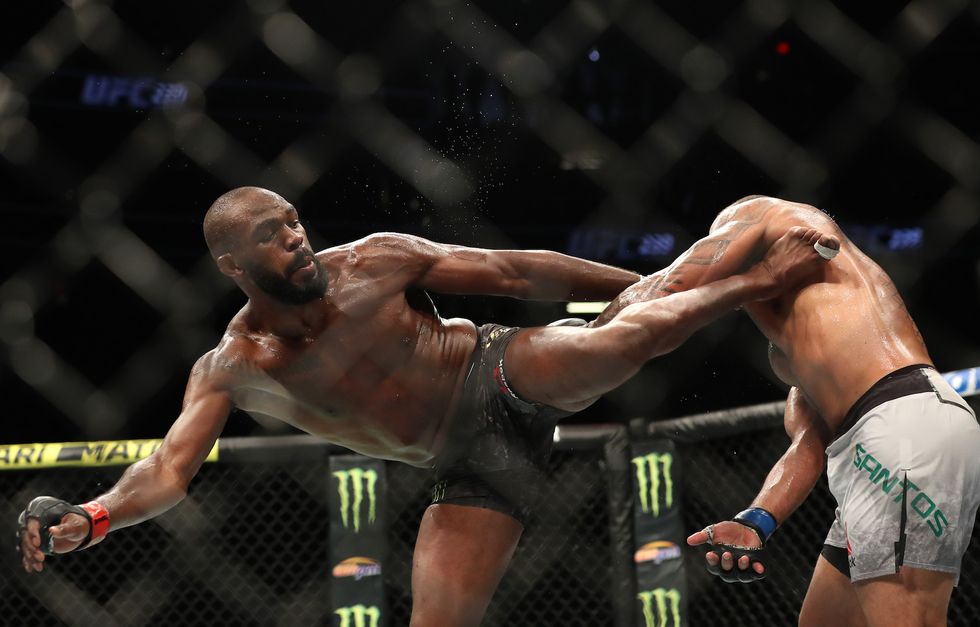 In a video posted to Jones’ Instagram account, the fighter takes spray cans from two masked men as they try to claim they aren’t doing anything, and one of them says “This ain’t the way, bro.”

Jones expressed his anger over the situation in an Instagram caption.

“Is this s*** even about George Floyd anymore?!?” Jones wrote. “Why the f*** are you punk ass teenagers destroying our cities!?? As a young black man trust me I’m frustrated as well but this is not the way, we are starting to make a bad situation worse. If you really got love for your city (505), protect your s***. All you old heads need to speak up, call your young family members and tell them to come home tonight.”

It’s unclear whether or not the men recognized Jones, but it’s likely fortunate for them that the altercation didn’t get physical. Jones is 6-foot-4 and more than 200 pounds, and a two-time light-heavyweight UFC champion. With a 26-1 record, he’s considered one of the greatest UFC fighters of all time.

Jones’ confrontation comes around the same time that NBA player J.R. Smith was seen on video beating down a rioter who smashed the window of his car.

Smith posted a video later explaining that “One of these motherf***ing white boys didn’t know where he was going and broke my f***ing window in my truck.”

With police officers in some cities choosing not to engage rioters with force during these demonstrations, there are numerous examples of citizens taking matters into their own hands, like the business owner who pulled up to his business, pulled a shotgun out of his car, and began shooting at some potential looters.