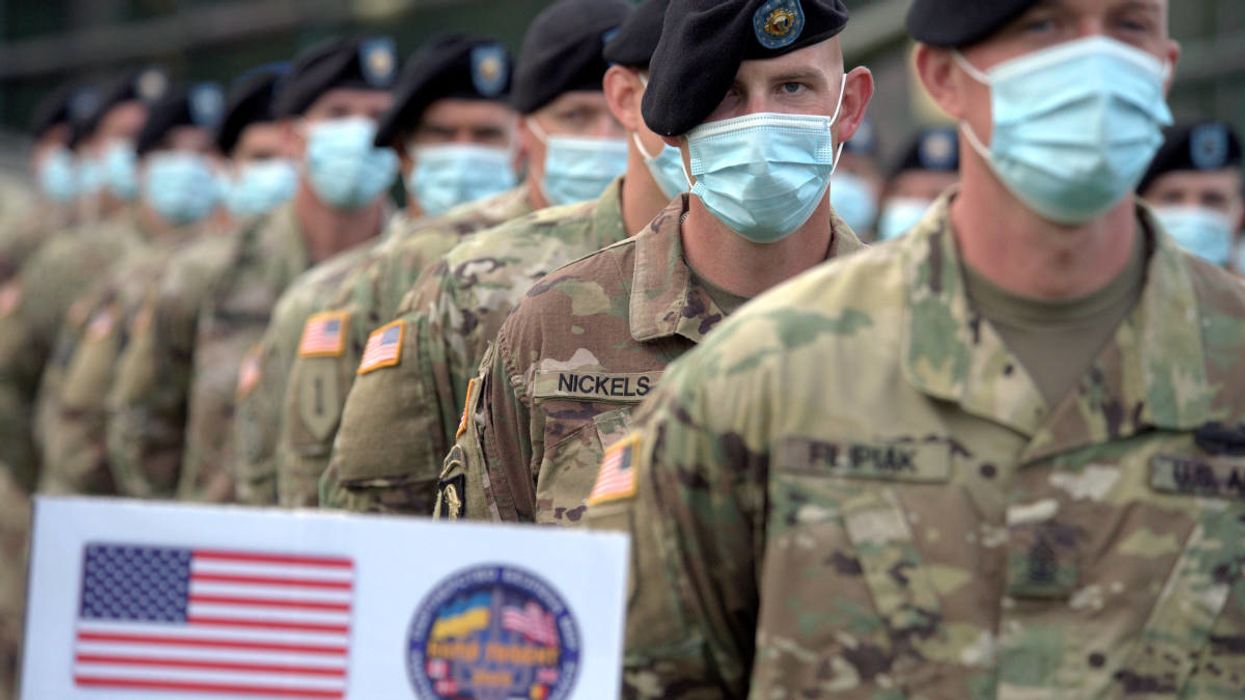 Suicides by active-duty U.S. military service members have risen by as much as 20% during the coronavirus pandemic, according to reports from senior military officials.

While the Pentagon has not released 2020 data, which remains incomplete, U.S. Army and Air Force leaders told the Associated Press they believe the pandemic is adding stress to service members who are already under the strain of war-zone deployments, national disasters, and violent demonstrations in U.S. cities. They say there have been 114 active-duty suicides this year compared to 88 at the same time last year, roughly a 30% increase.

“Army officials said discussions in Defense Department briefings indicate there has been up to a 20% jump in overall military suicides this year,” the AP reports. “The Army Guard is up about 10%, going from 78 last year to 86 this year. The Navy total is believed to be lower this year.”

The causes of suicide are complex and cannot solely be attributed to stress caused by COVID-19, but Army officials say the increase in suicides is timed with the start of the pandemic.

“I can’t say scientifically, but what I can say is — I can read a chart and a graph, and the numbers have gone up in behavioral health related issues,” Army Secretary Ryan McCarthy told the AP.

“We cannot say definitively it is because of COVID. But there is a direct correlation from when COVID started, the numbers actually went up,” he added.

“COVID adds stress,” Air Force Gen. Charles Brown said. “From a suicide perspective, we are on a path to be as bad as last year. And that’s not just an Air Force problem, this is a national problem because COVID adds some additional stressors — a fear of the unknown for certain folks.”

“We know that the measures we took to mitigate and prevent the spread of COVID could amplify some of the factors that could lead to suicide,” Helis said.

Among those measures was increased deployment time. Soldiers’ 10-month deployments were increased to 11 months because of two-week quarantine requirements at the beginning and end of overseas deployments. The Army is looking into shortening combat deployments to lessen the stress soldiers are facing.

“We were very focused on readiness four years ago because we had some readiness challenges, and we did a great job. The force is very, very ready now. But I think it’s time now to focus on people,” Gen. James McConville said.

The AP report noted that civilian suicides have also risen in recent years, but because 2020 data isn’t yet available, it’s difficult to compare with the military.

A CDC report released in August did note that 25.5% of 18-24-year-olds surveyed in late June had serious thoughts about committing suicide during the previous 30 days. “The levels of suicidal tendencies overall more than doubled since 2018 and nearly quadrupled for people between 25 and 44,” Daniel Horowitz wrote for TheBlaze.

Military officials are encouraging troops to reach out and support their fellow service members, particularly wounded warriors who may be less inclined to get mental or medical help due to infection concerns.

Need help? Call the National Suicide Prevention Lifeline (1-800-273-8255) Military veterans press 1. Individuals can also go to: https://suicidepreventionlifeline.org/talk-to-someone-now and veterans can go to woundedwarriorproject.org or call the project’s resource center at: 888-997-2586. 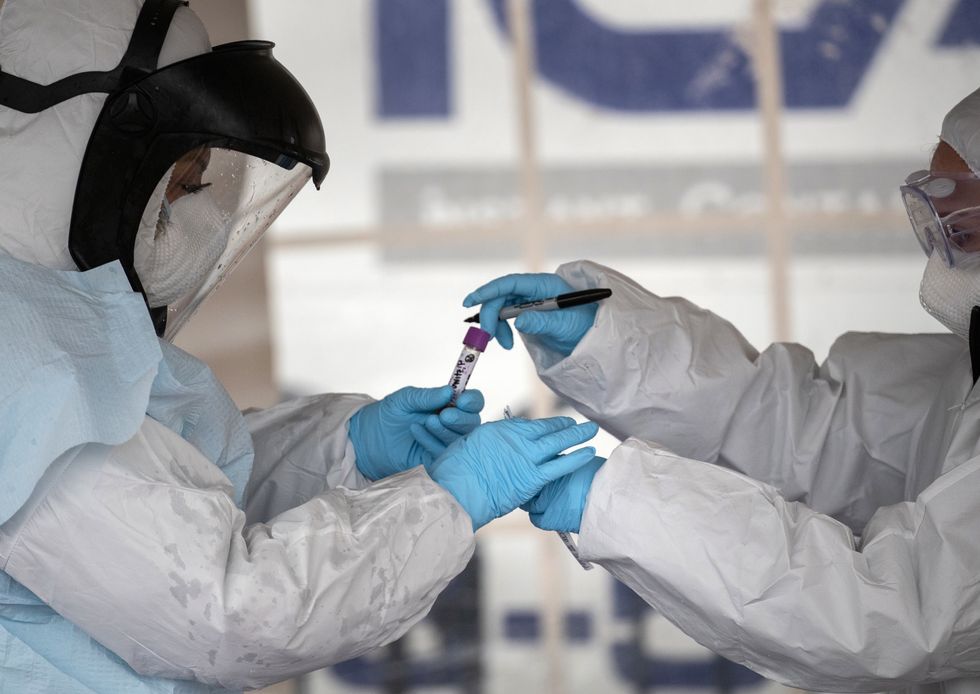 A U.S. Army reservist says she’s been on the receiving end of death threats after a radio host falsely identified her as COVID-19’s “patient zero” in the U.S.

Purportedly false reports of Maatje Benassi being patient zero have made tracks all across the internet, including on YouTube and social media channels.

Benassi told CNN’s Donie O’Sullivan that radio host George Webb said that she brought the coronavirus to China while participating in a Wuhan cycling competition that left her with a fractured rib and a concussion.

“It’s like waking up from a bad dream, going into a nightmare, day after day,” said Benassi, a mother of two who revealed that the harassment began after she participated in the Military World Games in October.

Some of the threats she received included “[e]xecute them by firing squad, we need to be killing these key people, these people will get a bullet to the skull.”

Benassi and her husband — a retired Air Force officer who is now a civilian employee at Fort Belvoir in Virginia — said that because the threats are not directed at them, and instead, have been made on social media about them, law enforcement cannot do anything about the threats.

CNN reports that she and her husband are now “subjects of discussion on Chinese social media about the outbreak, including among accounts that are known drivers of large-scale coordinated activities by their followers.”

“I want everybody to stop harassing me, because this is cyberbullying to me, and it’s gone way out of hand,” Benassi added.

According to CNN, “Webb offered no substantive evidence to support his claims about the Benassis, and said he considered himself an ‘investigative reporter,'” and not a conspiracy theorist. The CNN report described Webb as a “prolific 59-year-old American misinformation peddler,” who has “for years regularly streamed hours of diatribe live on YouTube, where he has amassed more than 27 million views and almost 100,000 followers.”

Benassi’s husband added, “It’s really hard to hold him accountable. Law enforcement will tell you that there’s nothing that we can do about it because we have free speech in this country. Then they say, ‘Go talk to a civil attorney,’ so we did. We talked to an attorney. You quickly realize that for folks like us, it’s just too expensive to litigate something like this. We get no recourse from law enforcement. We get no recourse from the courts.”

He said that he aired his grievances to YouTube, but it’s often too late after a video goes viral.

He added, “[T]he damage is done. I know it [will] never be the same. Every time you’re going to Google my name, it will pop up as patient zero.” 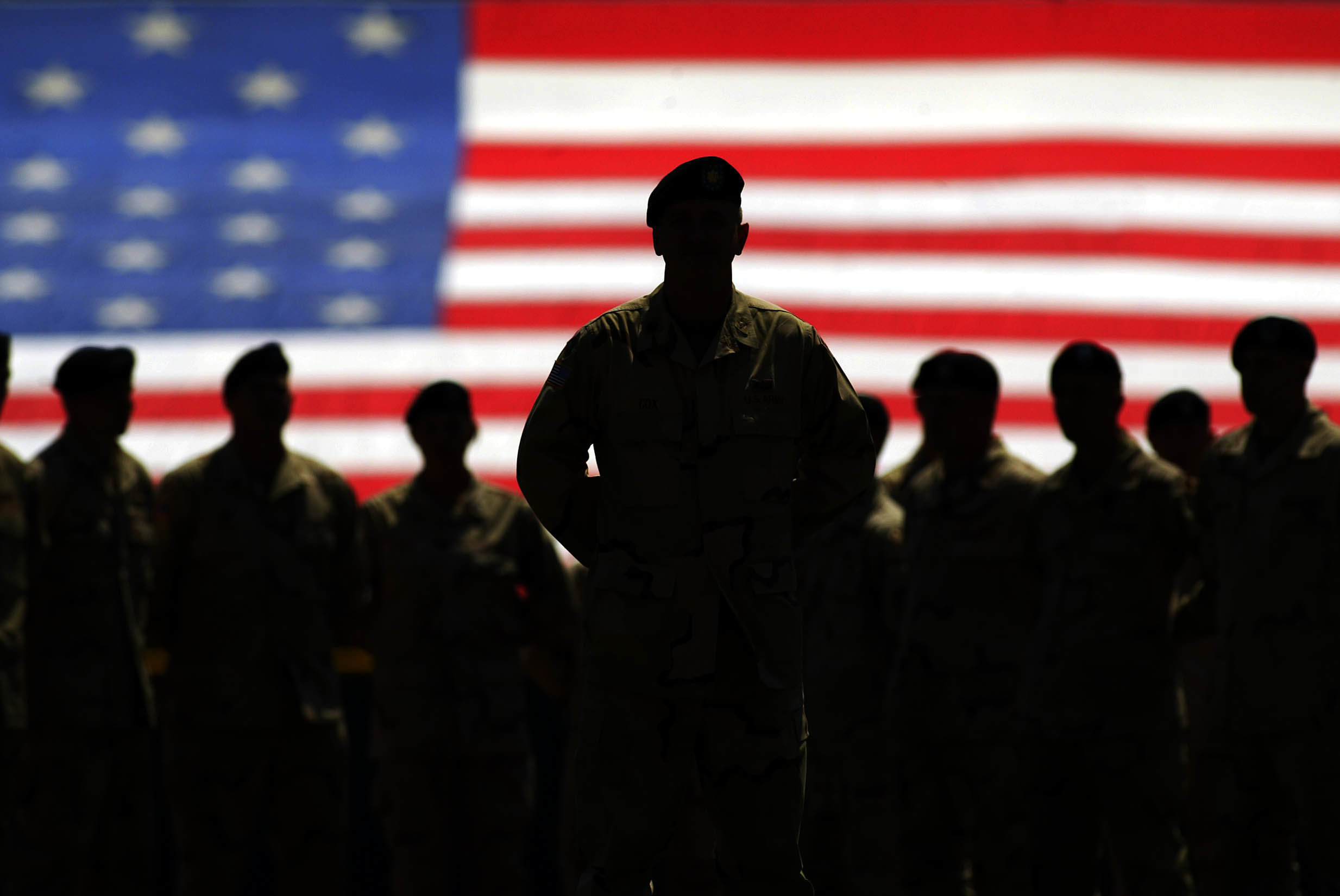 The U.S. Army is asking retired soldiers interested in helping fight the coronavirus in the United States to consider “re-joining the team.”

In a Wednesday emailed message sent by the Defense Finance and Accounting Services, Lt. Gen. Thomas Seamands wrote, “We need to hear from you STAT!”

The message, which was obtained by TheBlaze on Thursday, detailed the specialties needed by the U.S. military in order to help fight COVID-19.

Seamands, deputy chief of staff for the U.S. Army, explained that the Army is seeking retirees who previously served in health care specialties, such as:

A portion of the email stated, “These extraordinary challenges require equally extraordinary solutions, and that’s why we’re turning to you — trusted professionals capable of operating under constantly changing conditions. When the Nation called — you answered, and now, that call may come again.”

Any soldiers with a different specialty background are also welcome to reach out to determine how they may best serve the nation once more.

The email added, “If you are working in a civilian hospital or medical facility, please let us know. We do not want to detract from the current care and treatment you are providing to the Nation.” 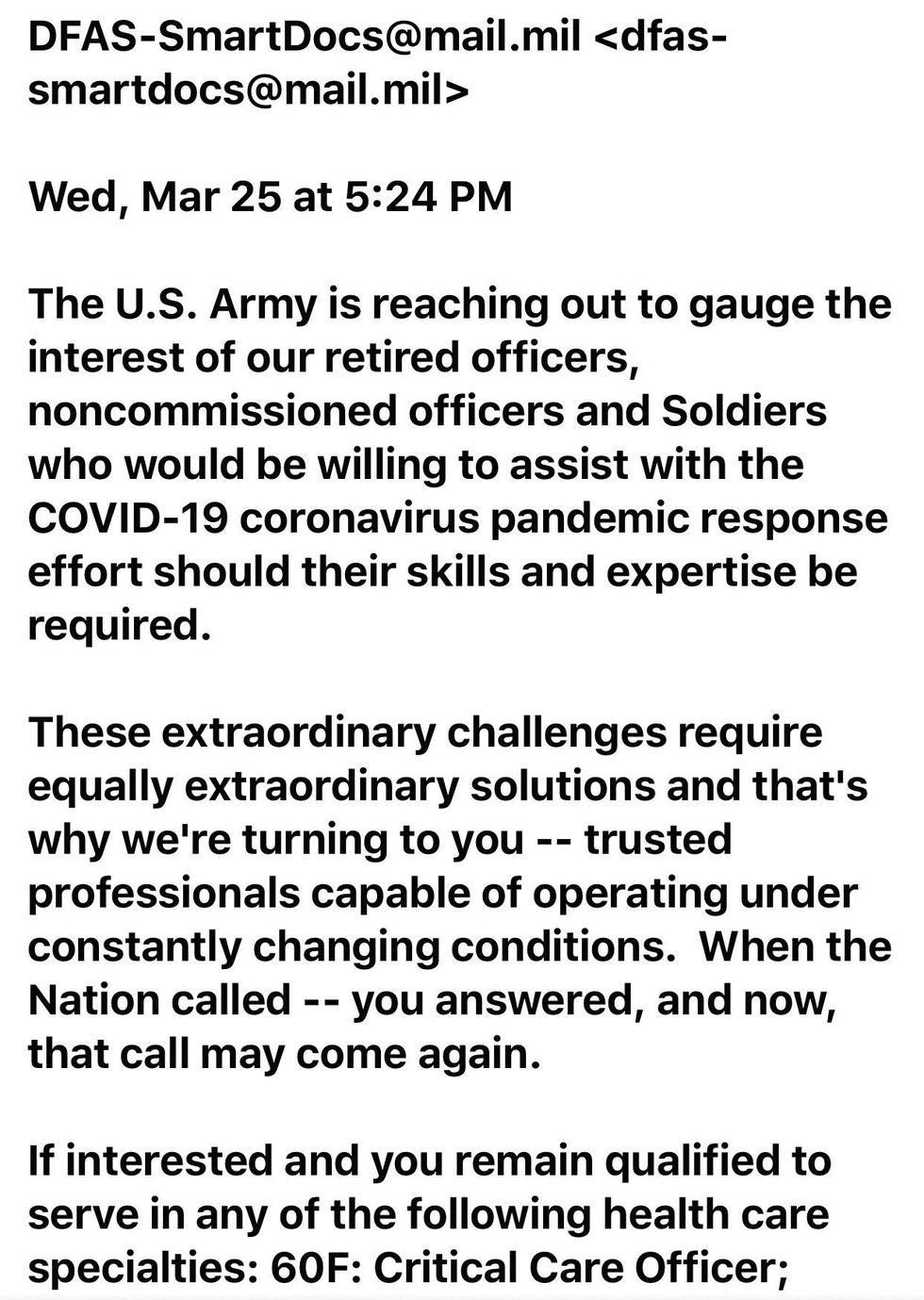 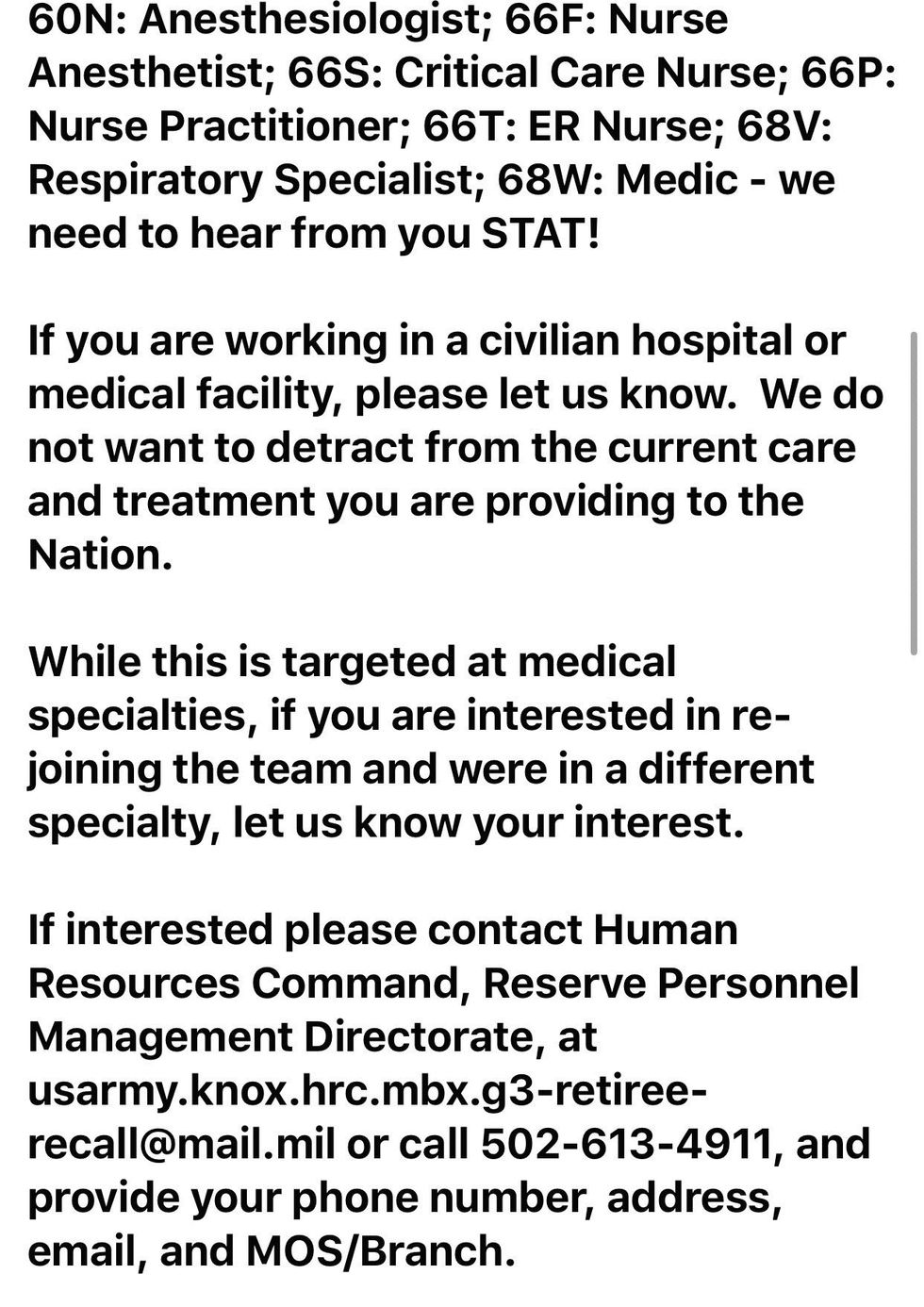