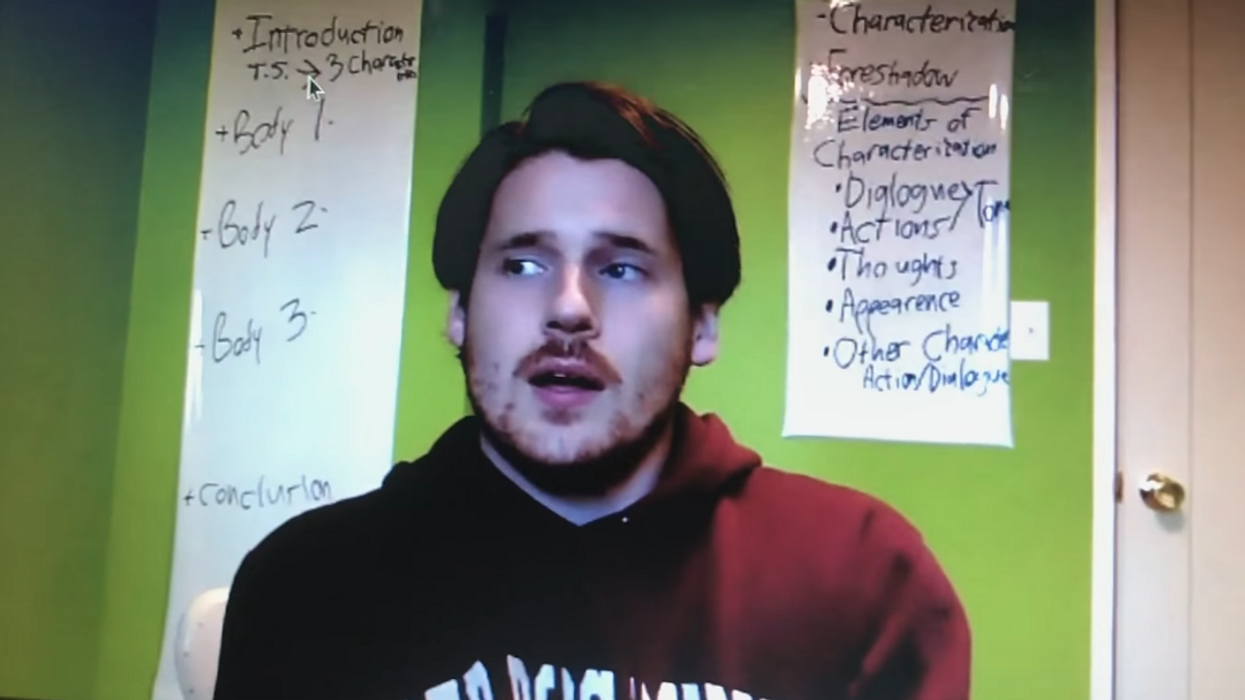 A middle school teacher in Washington state kept a 13-year-old student after class to lecture him over his support for President Trump — and the student recorded the whole thing.

It’s the latest in a growing string of incidents in which teachers are bringing their anti-Trump political biases into the classroom. Now that remote learning is more prevalent, more and more incidents are being caught on tape.

Connor Seaman, a language arts teacher at Kopachuck Middle School in Gig Harbor, had apparently taken issue with the student’s choice of Trump as his “hero” for a recent assignment. So he asked the student to stick around after class for a quick chat before he proceeded to spend nearly 10 minutes attempting to convince the student that his hero’s immigration policy is nonsensical and “racist.”

KTTH-TV talk radio host Jason Rantz, who first reported the news, said, “What started off as a reasonable — and correct — conversation about proper sourcing quickly devolved.”

Like Rantz said, at first it appeared that Seaman would simply advise the student to use more than one source for his project and move on, but that was not the case. Before long, the obviously anti-Trump educator proceeded to grill the student on border wall effectiveness and immigration policy.

After spending a few minutes debating border wall construction with the student, Seaman cut to the chase with a pointed question for the student: “Why is it heroic to make a wall to keep out immigrants?”

From this point on, it is blatantly obvious that Seaman intends only to lecture the student — not on his project, but on his politics. First, he compares illegal crossings to jaywalking, and soon after, he sets up something of a false dichotomy, asking, “What would be a bigger accomplishment: lowering murder rates or lowering illegal border crossing?”

The clever student stood his ground for a while, but eventually grew tired of the lecture and asked if he could leave. Yet, amazingly, Seaman pressed on to make a few final points.

“So if you’re gonna introduce bullet points, you kinda have to back [them] up with why that’s heroic. Because a lot of people who would argue that it’s not heroic and … a lot of the rhetoric that has been said has been very racist,” Seaman said in reference to a 2015 speech in which Trump alleged Mexico was sending “rapists” and “murderers” into the United States.

“It’s pretty racial language, so a lot of people would argue that it’s actually creating a lot of racist tensions by saying that,” he argued.

After seeing the video, the student’s mother reportedly contacted both the school’s superintendent and principal. According to KTTH-TV, the principal acknowledged that the lecture was inappropriate and passed along that Seaman was apologetic.

The district, however, has come to Seaman’s defense.

“The comment that the teacher tried to convince the student he was wrong for supporting President Trump’s immigration policy is not accurate,” district spokesperson Aimee Gordon told the local news outlet. “The student and teacher spoke about immigration policy in the context of providing evidence for why President Trump is a hero. The teacher’s intent was to encourage the student to use more than one source (whitehouse.gov) for his assignment.” 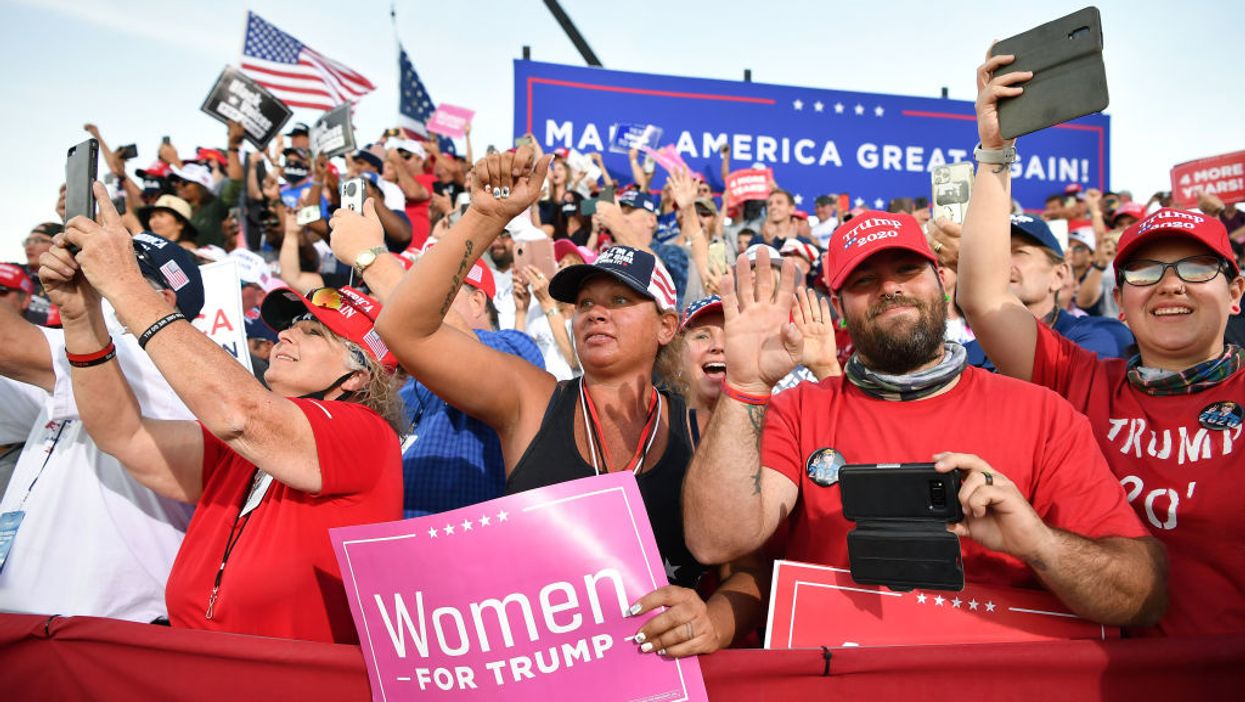 The editorial board at the Hartford Courant officially endorsed Democratic presidential nominee Joe Biden for president on Sunday — and in doing so called every last supporter of President Donald Trump a racist.

“You probably think you can vote for Donald Trump but not support racism; here’s why you’re wrong,” the story’s headline stated, making no mistake about the argument to be offered below.

Then, after briefly stating that there are “many reasons” not to endorse Trump, the editors dove into the “one issue that demands a closer look as we approach Election Day … racism”:

President Trump’s views on race and his willingness to exploit deep-rooted divisions are well documented. He jump-started his 2016 campaign by equating Mexicans with rapists and drug dealers. When racist violence erupted at a Charlottesville, Va., white-supremacist rally, Trump said there were “very fine people on both sides.” And most recently, when asked during a debate with Biden to denounce white nationalism, Trump said it was time for the militaristic hate group the Proud Boys to step back — but also to “stand by.”

That alone should frighten you, but right about now is when some of you are probably saying that you don’t subscribe to the kind of racist invective Trump uses to fire up his base. You believe in the free market and low taxes, or you’re against abortion, or you just don’t trust the Democrats.

But on race? You believe that all men and women are created equal. I see the person, you say, not the color of their skin.

Side note: The oft-repeated invocation that Trump referred to neo-Nazis and white nationalists at the 2017 riots in Charlottesville, Virginia, as “very fine people” is a flat-out lie.

As for Trump’s “Proud Boys” remarks, he would later clarify that, too, saying that the “alt-right” group should “stand down and let law enforcement do its work.”

Furthermore, despite the left-wing media’s insistence that he hasn’t, Trump has repeatedly condemned white supremacism.

Alas, moving on from their misleading portrait of Trump as a bonafide racist, the Hartford Courant editors insisted that all those who support him are racists, too.

“Politics is always about compromise,” they acknowledged. “But Trump’s racism isn’t the same, not even close.”

“The difference now, in 2020, is that Donald Trump doesn’t just exploit racism, he revels in it,” they claimed. “Trump wears his whiteness like a badge of honor and plays his affinity for groups like the Proud Boys and other agents of racial hatred for applause. Trump doesn’t simply mine the racial divide for political advantage, he treats it like a worldview to be celebrated and adored.”

As such, whoever votes for Trump is not an innocent party but a guilty participant in the proliferation of racist practices.

“You can’t support Trump without supporting the racism that forms the bedrock of his political persona,” the editorial stated. “You may not think of yourself as promoting racism if you vote for Trump, but you are giving comfort and aid to the hateful among us.”