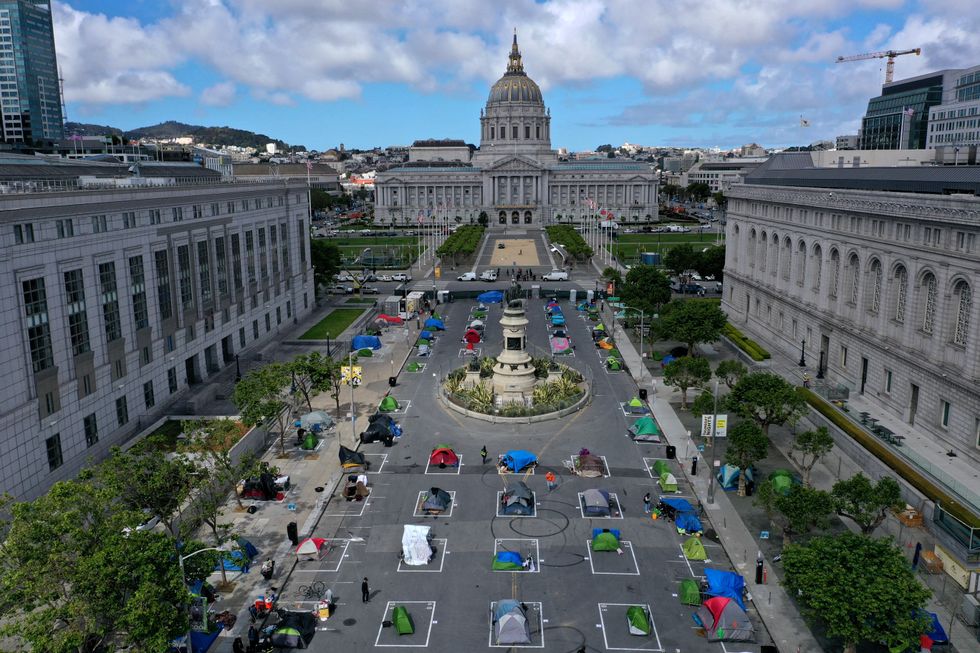 Tents have increased by 71% in San Francisco since January, and temporary structures for homeless people have risen a whopping 285% in the Tenderloin neighborhood. With the spike in people living in tents, San Francisco has dealt with its homeless epidemic by sanctioning the city’s first tent city.

San Francisco set up encampment squares this week that allows homeless people to legally pitch tents while keeping a safe distance from others. The tent city, which is called the “Safe Sleeping Site,” is located in close proximity to City Hall. San Francisco will open two more designated tent city sites soon.

The tent city, which is maintained by the Department of Public Works, features seven portable
toilets, two hand-washing stations, and 24-hour security.

The city decided to sanction the “Safe Sleeping Village” after San Francisco’s homeless shelters were forced to reduce capacity so that social distancing guidelines could be practiced during the coronavirus pandemic. With less availability at homeless shelters, vagrants started living in the streets.

“While in normal times I would say that we should focus on bringing people inside and not sanctioning tent encampments, we frankly do not have many other options right now,”
Mayor London Breed said. “Having places with resources serving people in the neighborhood is better than unsanctioned encampments.”

During the COVID-19 outbreak, San Francisco procured 2,000 hotel rooms for the city’s homeless population of more than 8,000. City officials say over 1,000 homeless individuals have been moved into hotel rooms during the shelter-in-place order.

San Francisco is
supplying drugs and alcohol to homeless people who are staying at city-leased hotels during the coronavirus quarantine.

Urban Alchemy, a nonprofit services provider, is offering health services and nutrition to unsheltered individuals in the tent city. The group urged musicians, therapists, artists, and teachers to donate their services to the tent city and its inhabitants. 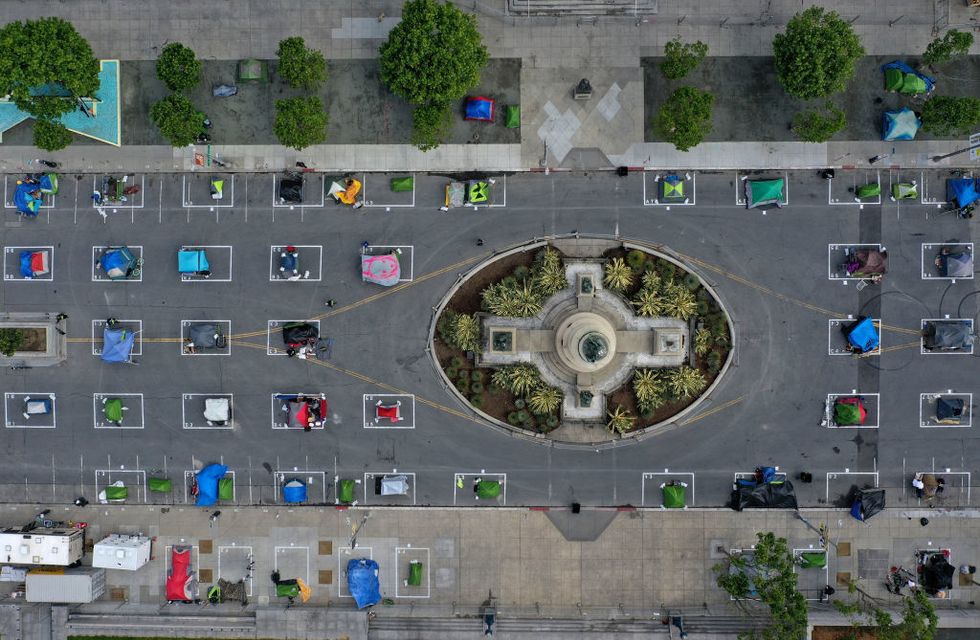 However, many San Francisco residents are concerned about the skyrocketing amount of homeless individuals. Lisa Russell told KGO-TV that she feels like a prisoner in her own home, in which she lives with her father, husband, and 11-year-old son. “I feel 100% like a prisoner,” Russell said.

Russell said that a large tent was set up right outside her home, only an arm’s reach from a window at their house.

“The virus, it’s so close that it could easily be brought in, you know,” Russell said. “I mean, if you open these windows or with that, you’re basically having anybody who’s that close inside your room, might as well invite them inside your apartment, you know, because they’re that close to it.”

The tent is near a vent, and Russell is worried that her family could be infected with coronavirus despite sheltering in place.

“We are scared that, by no fault of our own and by following the rules, we’re going to end up getting COVID. And that could be deadly for both my father and myself,” Russell, who suffers from severe asthma and her 73-year-old father, who is at high risk for the disease, said.

The Russells said they see rampant drug use daily, fights, and fires. The family claims that two tents caught on fire in recent months, sending smoke into their building.

“After 15 years of living in San Francisco, it’s, it’s where my heart is, I love this place,” Russell said. “And it kills me inside to see what is happening because we do not have city officials stepping up and doing their job.”

Tenderloin officials say that since the pandemic, tents have gone from 400 to more than 1,100. Mike Abuyaghi, an owner of an auto shop in the Tenderloin district, is also worried about the homeless epidemic.

“It’s unsafe. It’s unsanitary. Whatever is going on here, it’s inhumane,” Abuyaghi told CNN. “It’s like, you know, you come to work and you want to focus on what you’re here for. Then you have all the craziness going on.”