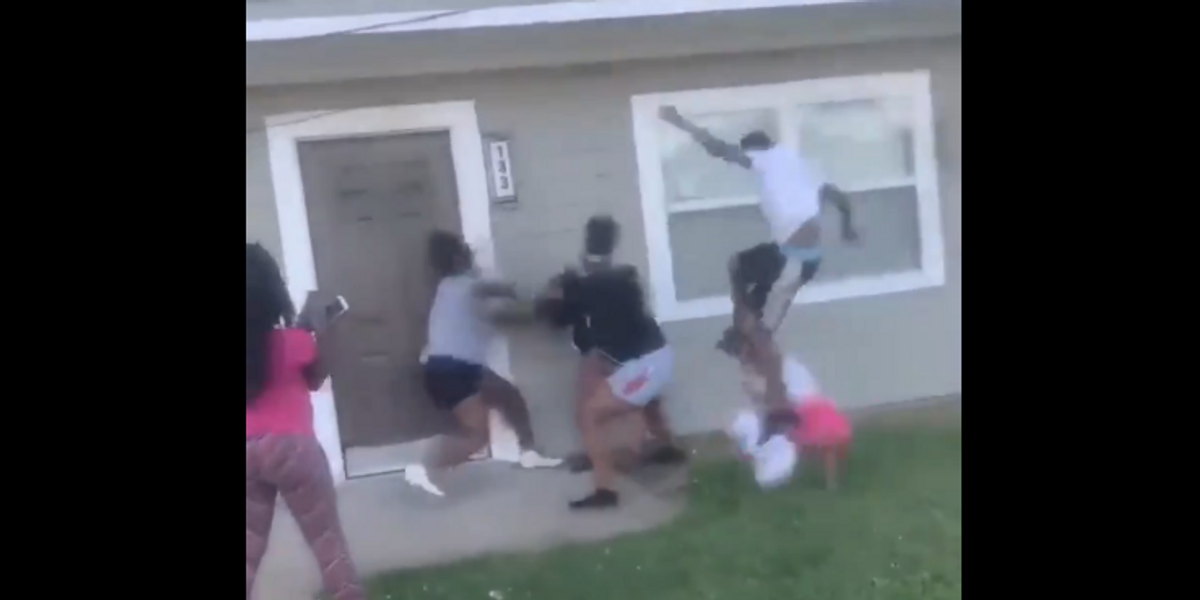 A disturbing video being widely circulated on the internet shows a group of alleged teens assaulting a young woman and even kicking her toddler in the face outside an apartment complex in Brooklyn, Illinois.

In the video, two girls can be seen punching the mother in the face repeatedly as the toddler clings to the mother’s leg crying. A third girl can be seen filming the attack.

Then out of nowhere, a boy comes onto the scene and fly-kicks the toddler in the face, knocking her to the ground. The boy then proceeds to kick the mother in the face several times while the girls drag her across the pavement.

The video ends with the girls fleeing the scene before the boy comes back in to drop-kick the mother in the back once again, knocking her back, causing her to hit her head on the apartment door frame.

The Sun reported that the female victim is pregnant, but that has not been confirmed.

Warning: The following post contains vulgar language and graphic violence that may be disturbing to some viewers.

Couldn’t been my baby I’ll be in jail on a FUCKIN MURDER CHARGE??? https://t.co/yFyyFnjwrM

In a post on its Facebook page, the Brooklyn Police Department confirmed the attack took place outside the Thomas Terrance apartments last Friday.

“On Friday, July 10, the Brooklyn Police Department was dispatched to the Thomas Terrance Apartments for an active disturbance,” police said. “Upon arrival of the police, one victim was identified that did suffer from a minor head injury and was able to identify her attackers.”

Police said the incident involved both adults and juveniles and said that they had been made aware of the video, which was originally posted to Facebook on Monday, July 13.

In an update post on Wednesday, police announced that all suspects involved in the incident had been taken into custody and are being held at St. Clair County Jail until formal charges are announced.

The names of the suspects have not been released to the public.

According to the Daily Mail, the mother of the boy involved in the beating posted on Facebook defending her son, saying that he kicked the toddler by “accident.”

“Watch your mouth that’s [my] son…He didn’t try 2 kick that baby he tried 2 jump over the baby on to her and made a mistake…as y’all can see the baby ran from under the girl fighting while he was coming down,” she reportedly said.

“My kid is not that type 2 kick a baby… Accidents happen,” she added.

The Daily Mail did not link to the Facebook post where the comments were made and did not disclose the mother’s name, but included what appears to be a screenshot of the comments with the profile name blurred out.