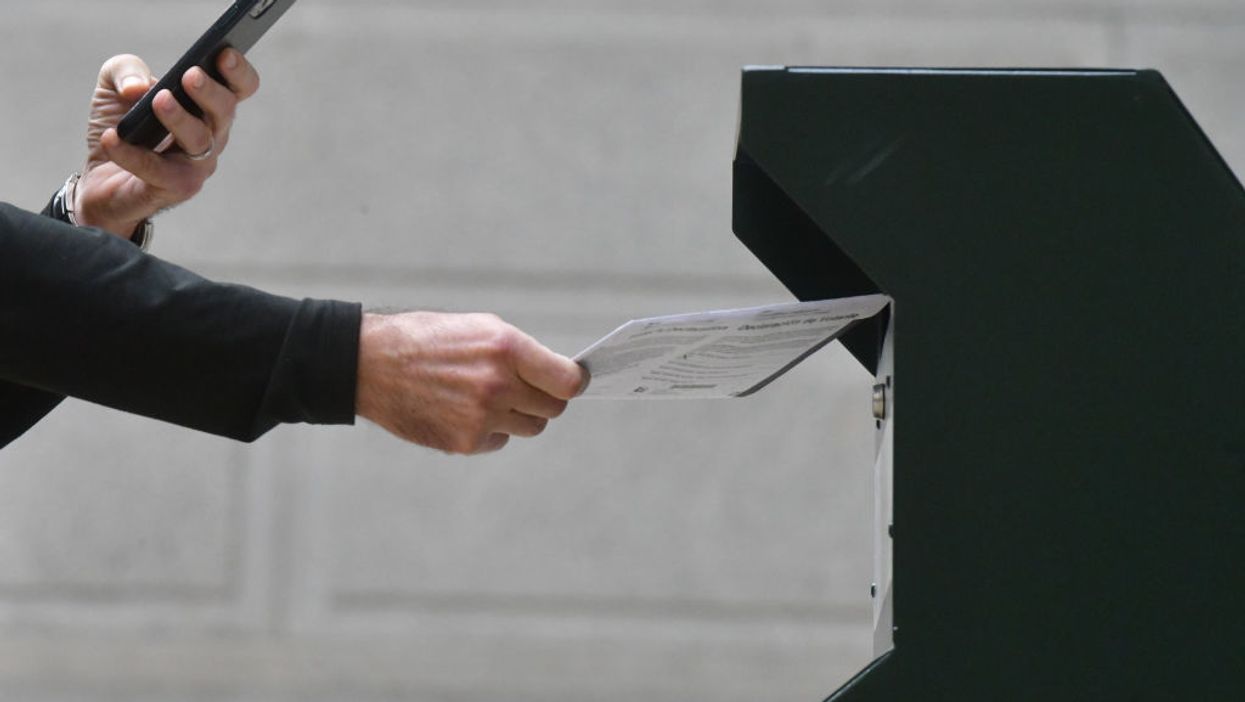 The South Florida Sun-Sentinel reports that on Tuesday a patrolling police officer spotted the men lingering near a mailbox in Lighthouse Point, north of Fort Lauderdale, long enough to draw the officer’s suspicions. The two suspects, Junior Alexander Cabral, 28, and Vladimir Cabral Cuevas, 20, were in a white Honda CRV next to the mailbox when approached by the officer.

During questioning, the policeman noticed a bag of mail wedged between the front seat and center console of the vehicle. He also observed a device used to extract mail from the drop box and two ballots that were separated from the rest of the mail.

Cabral and Cuevas were arrested and charged with stealing ballots, fraud, and petty theft, the Associated Press reports.

When the men appeared in court Thursday morning, presiding Judge Corey Amanda Cawthorn expressed concerns over the nature of the charges so close to Election Day.

“I’m not going to speculate as to the intentions behind the allegations, what mail was intended to be recovered or not,” she said. “But, I do have to take notice of the fact we have a very big election coming up next week and the timing seems to be aggravating in Mr. Cabral’s case.”

A defense attorney representing Cuevas claimed that incident was a misunderstanding.

“My client was charged incorrectly by overzealous law enforcement looking to fill an empty narrative that would make a politically expedient mountain out of a molehill given the proximity to the general election,” he told the Sun-Sentinel in a statement issued Thursday.

Broward assistant state attorney Katherine David requested a $10,000 bond for the ballot theft charge, noting that Cabral and Cuevas had no prior convictions.

Lighthouse Point police Commander Jack Vaccaro said the ballots will not be held as evidence and will be counted in the election.

“We are making arrangements to return these two ballots to their owners so they can deliver them to be counted,” he said.

In September, the Federal Bureau of Investigations warned voters to be on the lookout for election crimes as the Nov. 3 election approaches. Earlier this week, the FBI began an investigation after a ballot drop box holding more than 120 ballots was set on fire in Boston.

“Every year, Americans pick their leaders and make their voices heard through elections,” assistant director for the Criminal Investigative Division Calvin Shivers said in September. “Those elections must remain free and fair to ensure voters’ voices are truly heard. As Americans get ready to vote, the FBI is asking each citizen to remain vigilant and report any suspected criminal scheme targeting voters to the FBI immediately.”