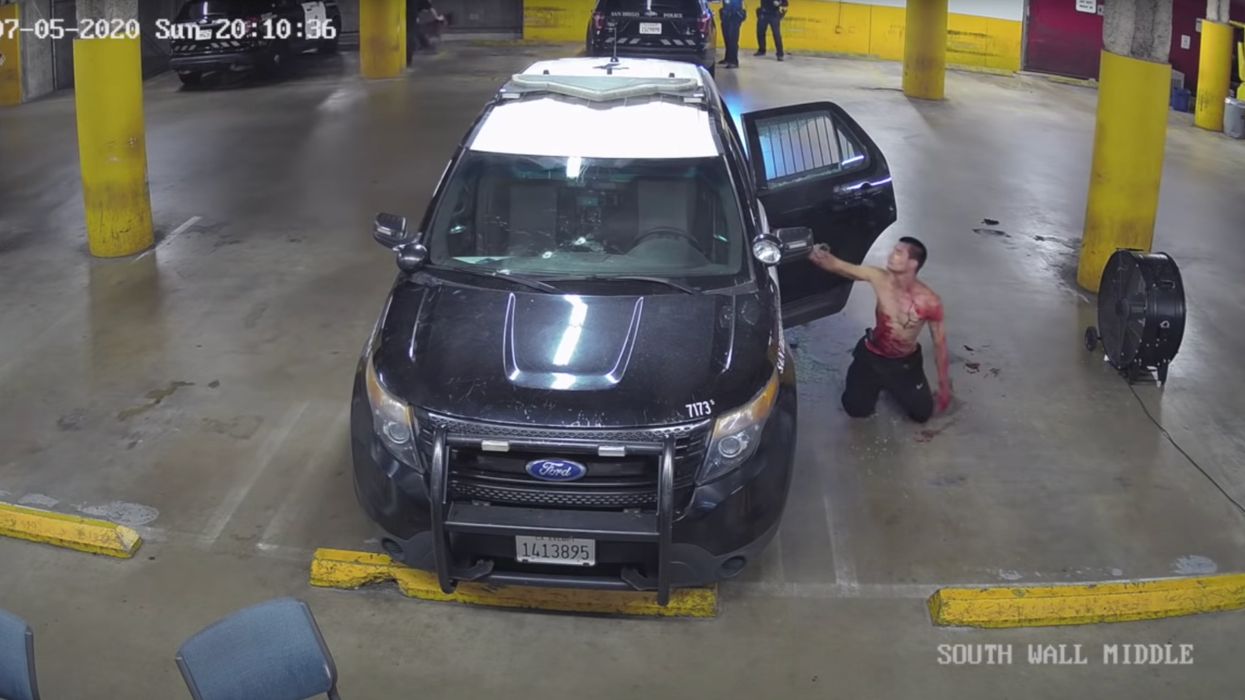 The San Diego Police Department released a video on Thursday capturing the moment officers were forced to fire on a suspect who had broken out of his restraints and was able to get his hands on an officer’s service weapon.

According to video obtained from the San Diego Police Department, “A 911 call came in from a downtown hotel about a man causing a disturbance. He had been pepper sprayed and held down by hotel security for threatening to stab hotel staff.”

According to KFMB-TV, the suspect was identified as Keith Bergman.

“The man was evaluated for being under the influence and placed under arrest,” police explained. “A search of his pockets revealed methamphetamine and five credit cards that did not belong to him. He was taken to police headquarters for processing.”

At that time, however, Bergman was reportedly able to maneuver out of his handcuffs and smash through plexiglass.

“While sitting in the back of a patrol car in the sally port, he slipped one hand free from his handcuffs,” authorities added. “He then broke through a plexiglass barrier, reached into the rear area of the car, and grabbed a backpack that contained an officer’s backup handgun.”

Security footage of the incident shows one of the San Diego Police officers hearing a commotion in the backseat of the vehicle, noticing that the suspect was free and had pulled out a handgun.

“[Officers] draw their service weapons and attempt to persuade him to drop the gun with no success,” the statement continued.

He then reportedly fires at least one round from the back of the patrol car and officers respond in kind.

“After several minutes, the man reaches through the broken glass and opens the rear door,” police explained. “He exits with the backpack and the handgun tucked in his waist. He tries and fails to open the rear hatch.”

Bergman then reportedly attempts to open one of the front doors, but an officer fires three rounds and prevents him from doing so.

A K-9 officer was then deployed, and the suspect was once again taken into custody without further incident. He was transported to a local medical facility for treatment of non-life threatening injuries.

The department told the station, “The San Diego Police Department is committed to being open and transparent with the public.”

The Internal Affairs Unit will conduct an investigation to determine if there were any policy violations, and the Shooting Review Board will evaluate the tactics used by the officers. The Community Review Board on Police Practices will conduct a review of the incident and provide any appropriate recommendations. The Federal Bureau of Investigations and the United States Attorney’s Office will also be monitoring the investigation.