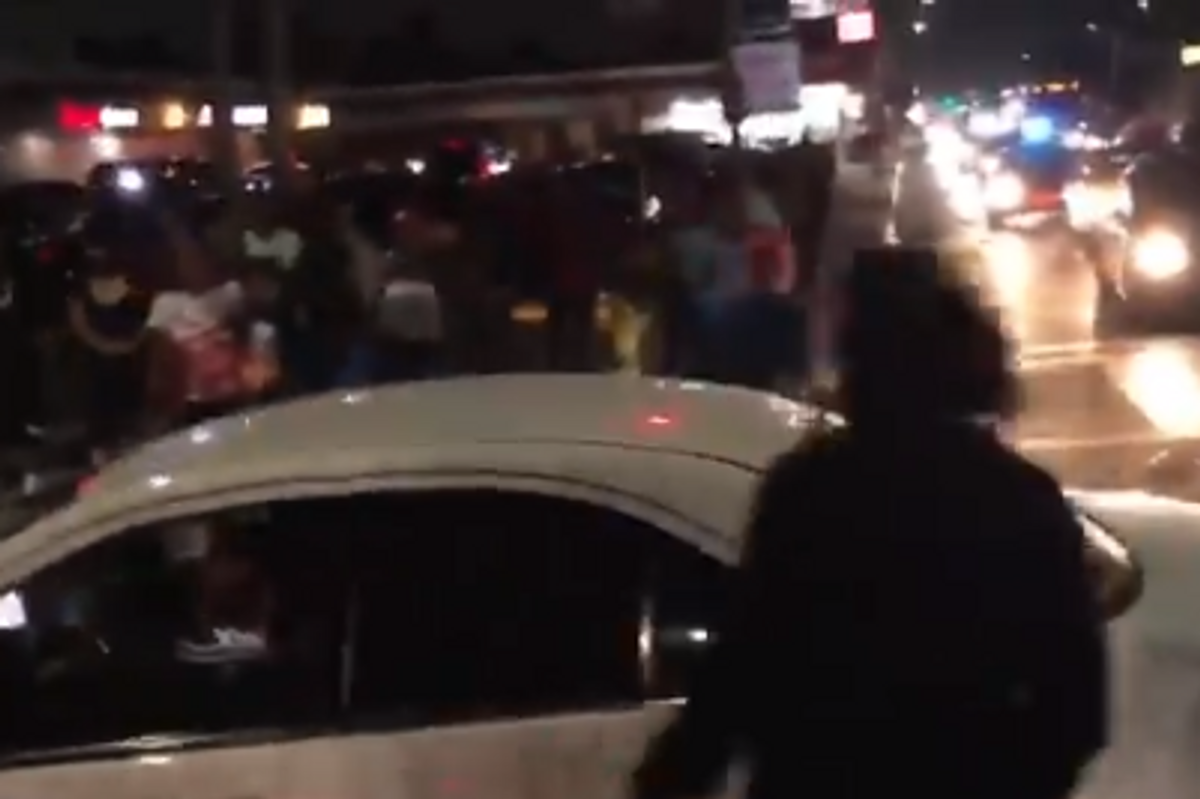 The officer was dispatched to the area at 11:16 p.m. in response to reports of a man jumping on vehicles in a parking lot, according to San Bernardino police Sgt. John Echevarria.

The San Bernardino Police released the 911 audio, in which the caller makes a complaint about a “man who’s really drunk and he’s waving around a gun.”

“There’s a man whos real drunk up here jumping on top of cars, he has a gun, and he’s just going crazy,” the caller told the police dispatcher. She described him as a black man with a white shirt and black shorts.

San Bernardino Police released body camera video, which shows the officer is in the parking lot approaching Bender, who fits the description of the 911 caller. The police officer pulls out his gun and points it at Bender. “Let me see your hands,” the officer instructs Bender, who raises his hands briefly and then puts them back on his side. Bender continues to walk away from the officer and tells the cop, “Man, I’m going to the store.”

The officer puts his gun away and attempts to apprehend the suspect, who tells him, “Don’t touch me!”

Cell phone video taken by a witness shows a police officer attempt to subdue a man outside the King Tut Liquor store in San Bernardino.

The police officer wrestles Bender to the ground and tells him, “Stop fighting, dude.” During the confrontation, Bender is seen on video reaching for an item in his waistband that appears to be a handgun.

Both men get up from the ground, and the officer draws his weapon and fires four shots at the suspect. The video ends as the officer collides with the bystander recording the video.

Bender was taken to the hospital but died from his injuries.

Regarding the last Press Release we just published, here is video of the incident. The images can be graphic, ther… https://t.co/7sPRdrCikY

A loaded 9mm handgun was recovered at the scene, Echevarria said. The gun was not registered.

“The suspect was large in size and was able to physically overpower the officer,” Echevarria said. “The suspect retrieved a weapon from his pocket and was turning to face the officer. At that time, an officer-involved shooting occurred.”

“The officer saw the weapon, and during the struggle, was able to disengage during that fight for control of that suspect, and was able to back away and protect himself by discharging his weapon,” Echevarria added.

Protests calling for justice in the death of Bender erupted outside the King Tut Liquor store on Friday.

“What I can do, is tear down the system that lifts up crackers with badges, and gives them power to be judge, jury, and executioner,” one demonstrator told the crowd.

Social media posts show demonstrators shouting, “Abolish the police!” “Defund the police!” and “F*** the police!” The protest spilled out into the streets, where protesters blocked an intersection.

SAN BERNARDINO: A BLM protester punches a Hispanic woman in the face and another BLM protester keys her car after B… https://t.co/fStEE9doPs 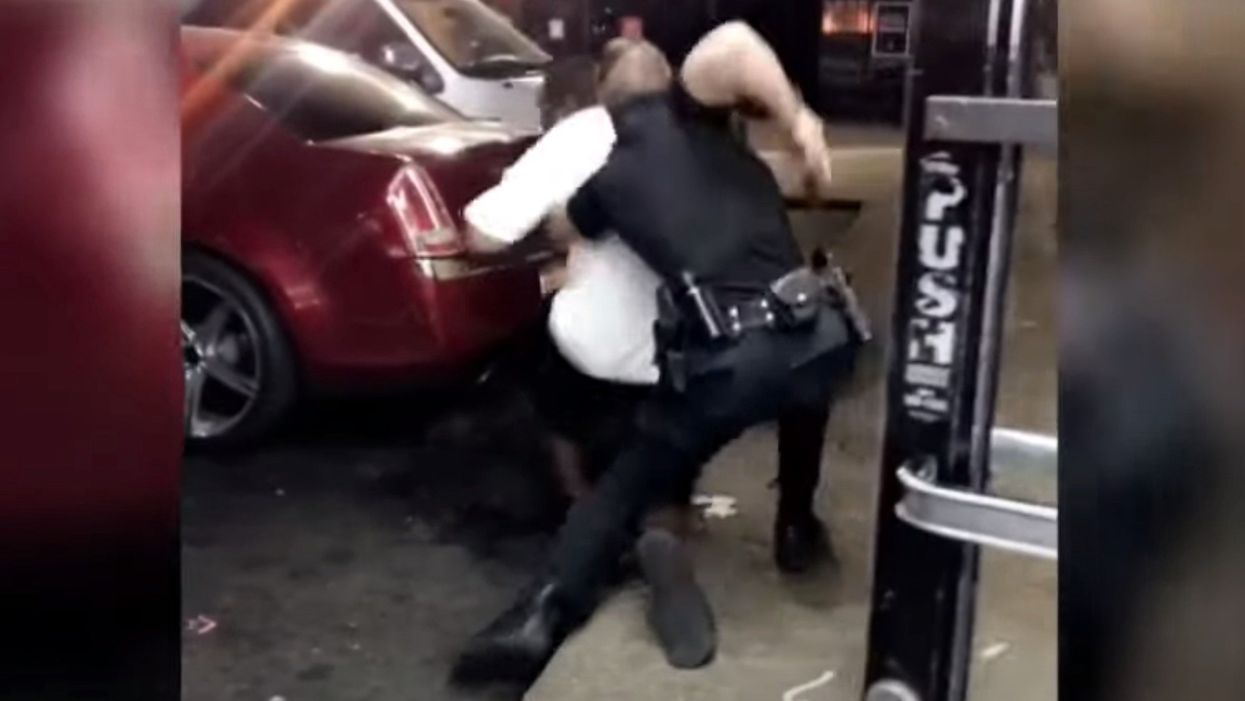 Some members of the black community in Southern California are expressing outrage over the latest incident of a police officer shooting and killing a black man, but cellphone video shows that he was pulling a gun during the altercation.

The violent and lethal confrontation unfolded outside a liquor store in the city of San Bernardino on Thursday.

Cellphone video from a bystander shows the police officer and the man wrestling before the man breaks free. The officer quickly pulls his gun and shoots at the man several times.

Authorities say that the man was taken to the hospital and later died of his injuries.

The San Bernardino Police Department posted a snippet of the cellphone video that shows the struggle and the shooting of the man.

Regarding the last Press Release we just published, here is video of the incident. The images can be graphic, ther… https://t.co/7sPRdrCikY

They identified the man as 35-year-old Mark Matthew Bender Jr.

Some of the neighborhood members expressed outrage at the incident and condemned the officer for being so quick to shoot at the man, implying that racism was a motive for his actions.

But a closer look at the cellphone video shows that the man was reaching for his gun and pulled it out during the altercation the moment before the officer fired on him.

BREAKING: Sources confirm suspect in San Bernardino OIS had a gun and its the item seen in his hand on cell phone… https://t.co/LnQ3fkRNFv

A statement released by the San Bernardino Police Department said that the officer had responded to a call about a man with a gun jumping on cars in the “King Tut” liquor store. He was near the store at the time and arrived quickly.

The officer confronted Bender, but the man refused to follow his commands and attempted to enter the liquor store, inside which were numerous employees and residents.

The statement said that the officer attempted to physically restrain Bender but that he was overpowered. It added that Bender reached for his gun and turned toward the officer when the officer shot at him four times.

Police said they provided Bender with medical aid but that he died at the hospital. They also claimed that they recovered a firearm at the scene. The 9mm handgun was loaded and not registered, and Bender was not legally allowed to possess a gun at the time.

The statement also lists Bender’s long history of arrests for violent crimes, including false imprisonment, criminal threats, and attempted murder. In addition he also had been arrested for domestic violence, possession of narcotics for sale, grand theft, and various probation violations.

Despite the report of the gun, some community members still accused the police of acting inappropriately.

Here’s a local news video about the lethal shooting: