This article was originally published by James Bovard at The American Institute for Economic Research. 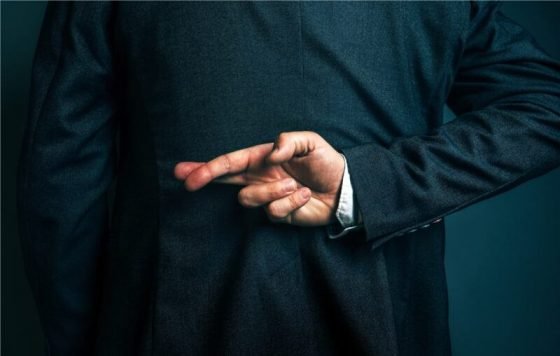 The final weeks of a presidential campaign are aome of the best opportunities to view political perfidy in spectacular colors. While the media lectures Americans about their civic duty to vote to save the nation, the candidates continue conniving nonstop with no respect for the facts or decency.

After the election is settled, the media and the political establishment will announce “the system worked” and Americans must again respect and obey their rulers (unless Trump is re-elected, of course).

Politicians have mandated warning labels for almost everything except voting booths. Federal agencies require full disclosure of risks for everything from mortgages to volunteering for medical experiments. People are entitled to far more information when testing baldness cures than when casting votes that could lead to war.

Hopefully, Americans will not be as gullible after the election as many are before casting their ballot. Dishonesty is the distinguishing trait of the political class, going all the way back to ancient Athens and the satirical plays of Aristophanes. In 1799, Thomas Jefferson observed, “Whenever a man casts a longing eye on offices, a rottenness begins in his conduct.”

A successful politician is often merely someone who bamboozled more voters than the other liar running for office. Political campaigns rely on deception because, as economist John Burnheim explained, “Overwhelming pressures to lie, to pretend, to conceal… are always present when the object to be sold is intangible and its properties unverifiable until long after the time when the decision to buy can be reversed.”

Lying has long been part of presidents’ job description: the names of Lyndon Johnson and Richard Nixon practically became synonyms for deceit. Former President George W. Bush is being rehabilitated by the media nowadays. But Bush made “232 false statements about weapons of mass destruction in Iraq and another 28 false statements about Iraq’s links to Al Qaeda,” as the Center for Public Integrity reported. Bush’s determination to dishonestly drag America into another Middle East war led to the deaths of more than 4,000 American troops and hundreds of thousands of Iraqi civilians.

President Barack Obama received sainthood even before his election and he retained his halo even though he falsely promised dozens of times that people could keep their doctor after Obamacare’s decrees took effect. Obama campaigned in 2008 on a peace platform and then bombed seven nations. Obama promised “no more illegal wiretapping” but he unleashed the National Security Administration to target any American “searching the web for suspicious stuff.”

The 2016 presidential race was a landmark: never before had American voters been obliged to choose between two such widely despised candidates. Routine deceit by both candidates helped make “post-truth” the 2016 word of the year according to the Oxford English Dictionary.

The 2020 race is also deluging voters with near-record levels of malarkey. Joe Biden denied referring to American soldiers as “stupid bastards” (despite a video of his spiel), denies that his son Hunter has done anything wrong (despite the pesky laptop emails), and exaggerated the Covid death toll a hundredfold. Trump has ludicrously portrayed his pandemic response as faultless, wildly exaggerates the economic achievements of his administration, and perennially denies the damage inflicted here by his trade wars. The one certainty is that the 2020 election will not be won by an honest man.

If a new president is elected next month, the media will insist that “this time is different” and that Americans can safely trust the White House again. In reality, Election Day merely marks a brief intermission between campaigning lies and governing lies. Yet, if Biden wins, Americans will be encouraged to pretend that election victories expunge the sins – or at least the character defects – of triumphant politicians. Winners supposedly deserve a “honeymoon” where people pretend they are trustworthy enough to enact new laws and launch ruinous new federal programs.

But nothing happens after Election Day to make politicians less venal. Presidents and members of Congress take oaths to uphold and defend the Constitution. But, as former U.S. senator Bob Kerrey explained in 2013, “The problem is, the second your hand comes off the Bible, you become an asshole.” When elected officials scorn the Constitution, politics becomes little more than promising and pilfering.

America is increasingly a “Garbage In, Garbage Out” democracy. Politicians dupe citizens and then invoke deluded votes to sanctify and stretch their power. In the post-9/11 era, politicians treat Americans like medical orderlies treat Alzheimer’s patients, telling them anything that will keep them subdued. It doesn’t matter what untruths the people are fed because they will surely forget them.

Lies subvert democracy by crippling citizens’ ability to rein in government. As Willie Brown, the former mayor of San Francisco and mentor for Vice Presidential candidate Kamala Harris, said, “In politics, a lie unanswered becomes truth within 24 hours.” Any lie accepted by a sufficient number of ignorant voters becomes a political truth.

Disregarding political lies paves the way for official crimes. As former New York City mayor Michael Bloomberg declared, “When we tolerate dishonesty, we get criminality.” If elected politicians can lie and cover up their actions, then how can any reasonable person not expect to be oppressed?

Politicians assure that voters’ apparent consent is irrevocable regardless of how many lies permeated election campaigns. But there is no such thing as retroactive self-government. Belatedly exposing political lies does nothing to resurrect lost freedoms.

Deceiving voters is as much a violation of their rights as barring them from the polling booth. Only if we assume that people consent to be lied to can pervasive political lies be reconciled with democracy. And if people consent to deceit, elections become little more than patients choosing who will inject their sedatives.

President Obama, in his January 2017 farewell address, criticized Americans who “blame the leaders we elect without examining our own role in electing them.” By Obama’s standard, the perpetual perfidy of the political class would justify condemning voters almost regardless of how they cast their ballots. Obama also condemned people who did not vote. Obama thereby created a no-win situation – except for politicians.

Obama, in his 2016 speech to the Democratic National Convention, also declared, “We do not look to be ruled.” Regardless of the irony of a heavy-handed ruler tossing out that line, it rings true for tens of millions of Americans who make their own liberty their supreme political value.

In the short run, the political game is rigged so that winners capture far more power than many, if not most, Americans would willingly cede to them and vastly more than the Constitution permits. But citizens can reduce the hazards they face by remembering that winning votes never redeemed a rascal. The winner of next month’s presidential election will be a clear and present danger to Americans’ rights and liberties regardless of his margin of victory.

The post “Choose Your Liar” Democracy first appeared on SHTF Plan – When It Hits The Fan, Don't Say We Didn't Warn You.