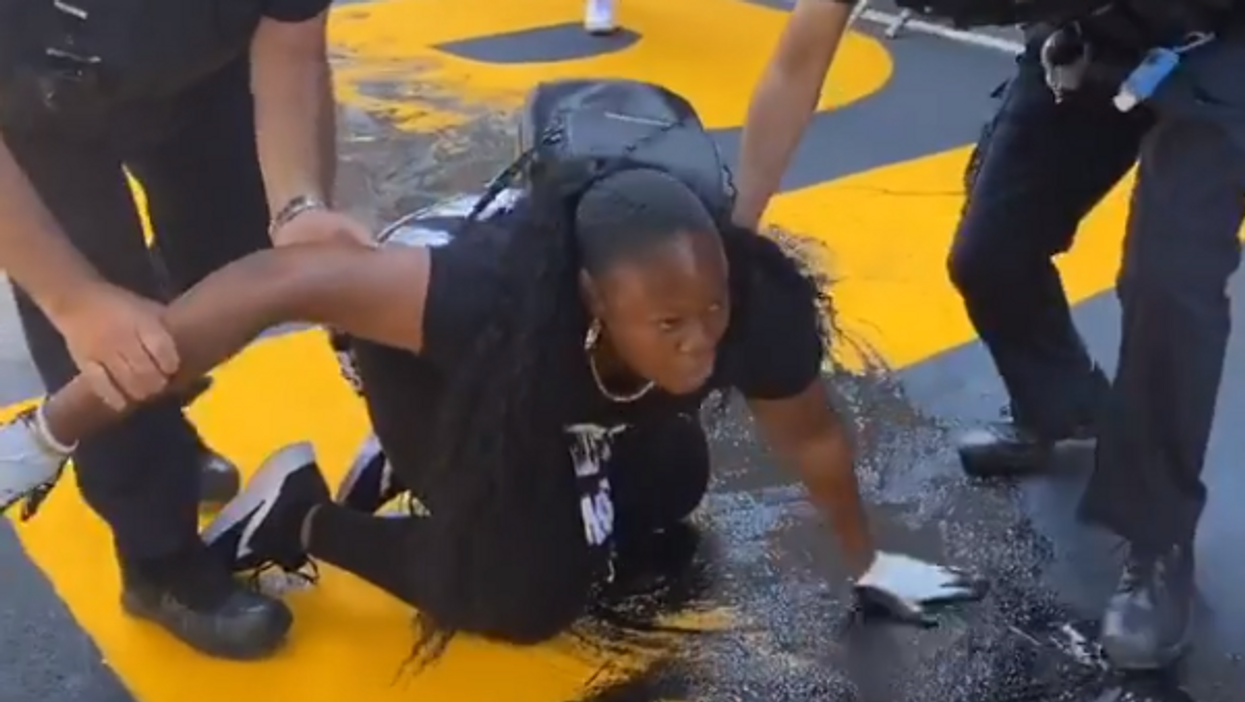 Two protesters poured paint on the Black Lives Matter mural in front of Trump Tower in New York City on Saturday afternoon. During the demonstration, an NYPD officer was injured.

Christian activist Bevelyn Beatty from the At The Well Ministries dumped paint over the Black Lives Matter mural on New York’s Fifth Avenue. While spilling black paint over the yellow letters, Beatty shouted: “Refund the police,” which is a counter argument to the suddenly trendy “defund the police” movement.

“Black lives matter, but you want to defund the police for black people. You’re lying,” Beatty said. “We’re not standing for Black Lives Matter! We want our police.”

On her Instagram, Beatty called Black Lives Matter a “domestic terrorist organization.” “They don’t care about black lives,” she wrote. “They support the killing of more than 600K Black Babies every year!”

While on her hands and knees spreading the paint around, a police officer attempted to apprehend Beatty, who was wearing a shirt that said: “Jesus Matters.” She flailed her arms, and the cop fell face-first into the pavement. The officer was injured from the hard fall and taken away in an ambulance to Bellevue Hospital with non-serious injuries.

The mayor’s office said the vandalism was unacceptable, and that the New York City Department of Transportation will be repainting the mural that stretches from 56th to 57th street.

Beatty, 29, and Edmee Chavannes, 39, both from Staten Island, were charged with criminal mischief.

Beatty also vandalized the Black Lives mural in Brooklyn this weekend by pouring paint all over the letters.

The Black Lives Matter mural near Trump Tower has been vandalized four times since it was painted on July 9 with the help of New York City Mayor Bill de Blasio (D).

On Friday, two people were arrested for spreading blue paint on the Black Lives Matter mural as they chanted: “All lives matter” and “Blue lives matter.”

Earlier this month, a Black Lives Matter mural on a suburban Chicago street was altered with paint to read: “All Lives Matter.”

A Black Lives Matter mural in Martinez, Calif., was vandalized on the Fourth of July. The couple who painted over the letters with black paint were charged with a hate crime.

“Slightly Offens*ve” host Elijah Schaffer gave his commentary regarding the couple being charged with a hate crime for painting over a mural.