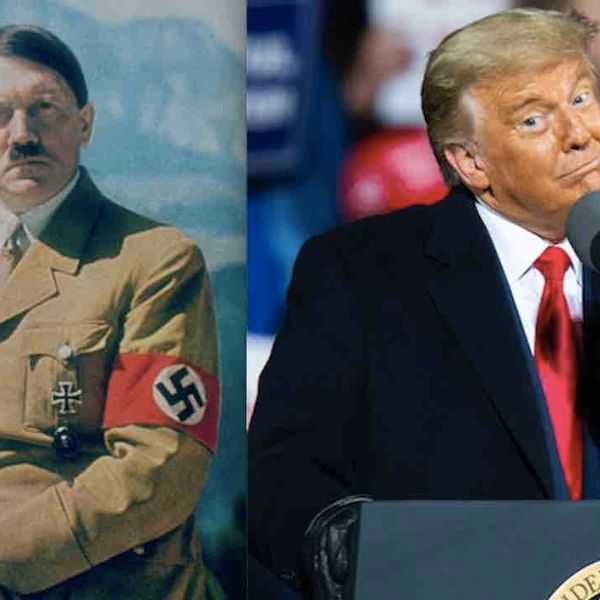 Dr. Bandy Lee began her Twitter post by seemingly extending an olive branch: “Donald Trump is not an Adolf Hitler.”

Phew! Finally a voice of reason.

But what she had to say next suggested that, to her, Trump is not like Hitler because Hitler actually had redeeming qualities: “At least Hitler improved the daily life of his followers, had discipline, and required more of himself to gain the respect of his followers. Even with the same pathology, there are varying degrees of competence.”

Lee soon deleted the tweet, acknowledging later Monday that it rubbed many the wrong way:

Okay, I have taken it down, since it has upset so many people and was not provoking thought but the opposite. Of n… https://t.co/5EJo6H2Llm

“Okay, I have taken it down, since it has upset so many people and was not provoking thought but the opposite,” she wrote. “Of note, my statement was about how little Donald Trump believes he needs to do to retain his followership, NOT to minimize Adolf Hitler’s atrocities.”

I know most of you understood, and I appreciate it!

It wasn’t the first time Lee made a Trump-Hitler comparison on Twitter:

A reporter whose grandparents were refugees from Nazi Germany related to me: “I cannot help but remember a conversa… https://t.co/tPwy1oVQzJ

Needless to say, we are seeing the same phenomenon here, and every day that Do… https://t.co/xh2EcI2rv9

“Needless to say, we are seeing the same phenomenon here,” Lee concluded, “and every day that Donald Trump has exposure to the public, he spellbinds his followers ever more deeply, as mental health experts are precisely the ones banned from comment.”

As it turns out, Lee has been at the helm of an anti-Trump locomotive since his election in 2016, despite her lack of involvement in political matters to that point.

The News added that in December 2019 Lee and two other mental health professionals sent a petition to Congress — signed by 350 other health professionals — saying Trump’s mental fitness was on a downward trend and that he had the “real potential to become ever more dangerous, a threat to the safety of our nation.”

The American Psychiatric Association reaffirmed in March 2017 its support for the Goldwater Rule — which says “member psychiatrists should not give professional opinions about the mental state of someone they have not personally evaluated,” the paper said — in large part as a response to psychiatrists like Lee speaking out about Trump’s mental health.

But Lee hasn’t been an APA member since 2007 and isn’t held to its ethical guidelines, the News said, adding that she said the APA’s Goldwater Rule reaffirmation actually was an attempt to “silence psychiatrists” and described it as “alarming and unacceptable.”