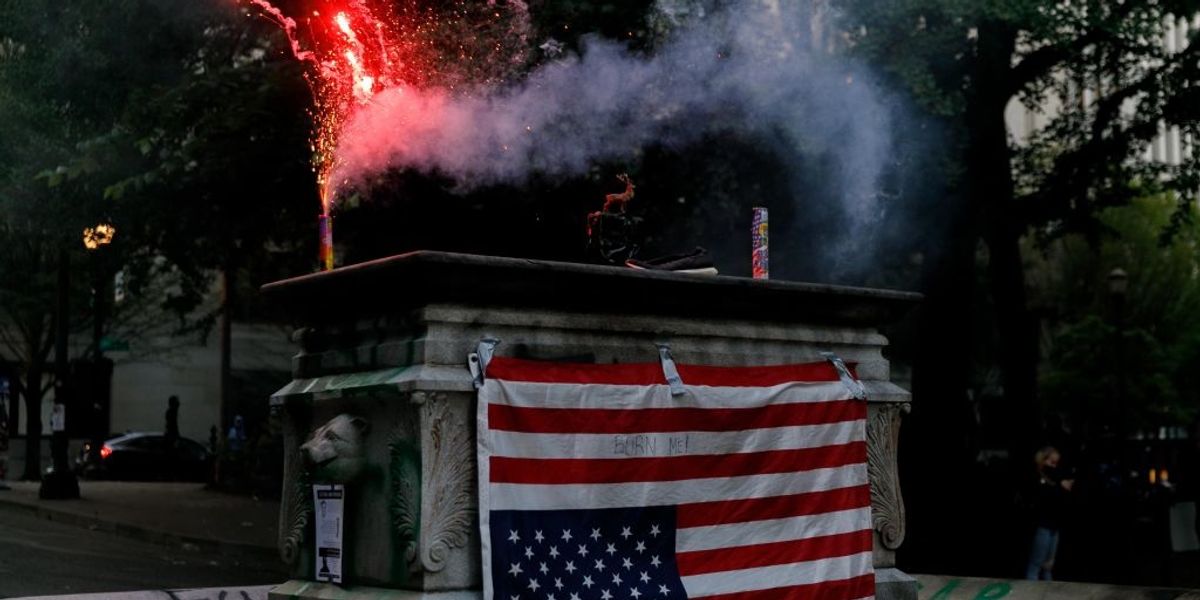 Federal prosecutors have charged seven rioters for their alleged roles in violent protests that took place outside the Mark O. Hatfield courthouse in Portland, Oregon, over the weekend.

According to a news release published by the Department of Justice Tuesday, some of the rioters had weapons such as a riot shield, a machete, a knife, mace, and components for a pipe bomb on them at the time of their arrest.

Officers attempting to protect the courthouse were allegedly targeted by rioters who “used aerial fireworks including mortars, [and] high intensity lasers targeting officers’ eyes” as well as rocks, bottles, and paint balloons against them.

Here’s more from the DOJ:

On July 2-3, 2020, Olsen is accused of using his body to push on and hold a glass door at the Hatfield Courthouse closed, preventing officers from exiting the building and causing the door to shatter. With the door broken, a mortar firework entered the courthouse, detonating near the officers. The officers used shields and their bodies to block the open doorway for approximately six hours until demonstrators dispersed.

On July 4, 2020, Ahuja is accused of willfully destroying a closed-circuit video camera mounted on the exterior of the Hatfield Courthouse.

On July 5, 2020, Blank is accused of assaulting a federal officer with a shield while the officer was attempting to arrest another protestor.

On July 5-6, 2020, Faulkner, Fellini, Porter, and Teo are accused of assaulting federal officers with high intensity lasers. At the time of his arrest, Faulkner also possessed a sheathed machete.

The shocking list of charges alleges that those arrested were certainly not peaceful protesters, but rather appear to be purposeful agitators.

After the deployment of numerous agents from federal agencies to Portland, there have been several arrests at… https://t.co/mmxbvQkeWn

All seven of the people charged appeared before federal court on Monday. The Justice Department was careful to note that “a criminal complaint is only an accusation of a crime, and a defendant is presumed innocent unless and until proven guilty.”