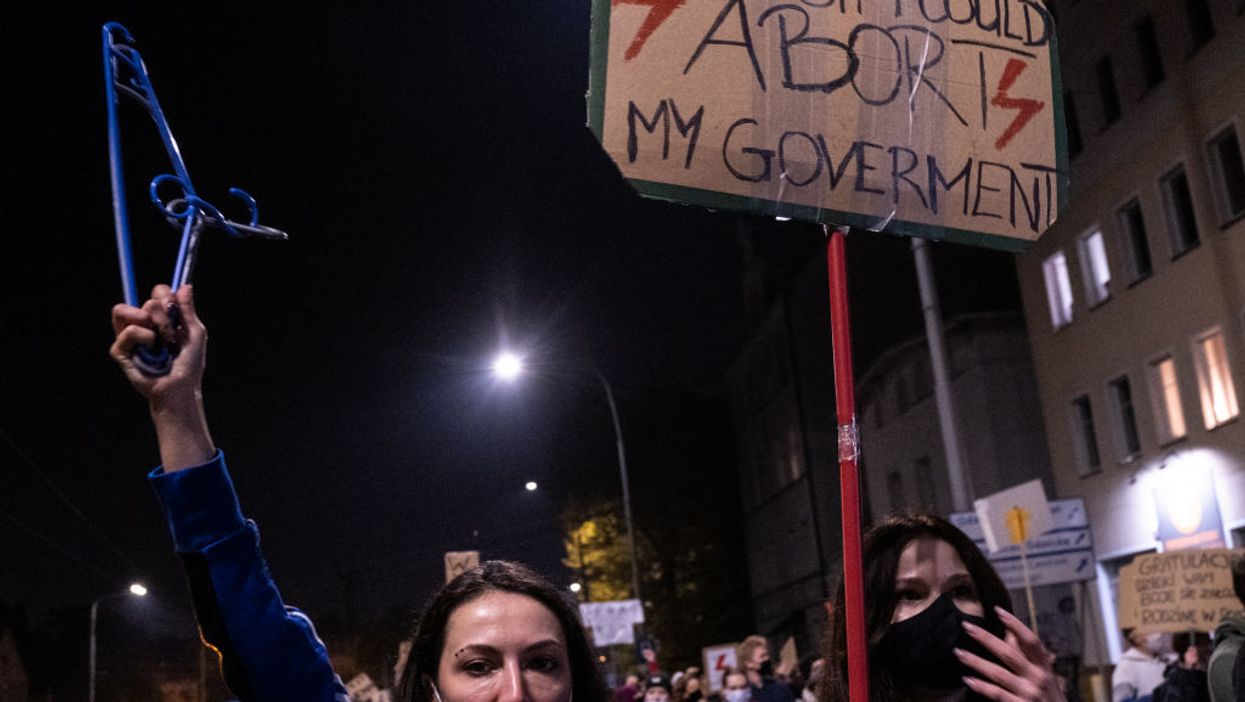 Protesters in Poland disrupted church services and told congregants attending Mass on Sunday to “get the f*** out” following a pro-life legal ruling that declared.

Multiple reports indicate that pro-abortion activists dressed as “handmaids” or carrying signs and chanting entered cathedrals and demanded the right to abortion.

Video of the protests shared by Voice of America on social media shows some being arrested by police.

Poland police detain pro-choice protesters as they try to enter a church Sunday in Warsaw in a protest against a ne… https://t.co/Hq68JNwyGq

“Crowds of people took to the streets screaming ‘Get the f*** out’,” journalist Krystian Kratiuk told LifeSiteNews.

“On Sunday they organized an action of attacking churches, entering them, interrupting Masses and shouting ‘get the f*** out’ in front of [them],” Kratiuk added. “Left-wing MPs do the same and the mainstream journalists loudly support the crime, as interrupting Mass is in Poland.”

According to LifeSiteNews, some protesters in Pozna? invaded a cathedral during Mass and chained themselves to the altar rails for hours. They carried signs that read “Catholics also need abortion” and “shame,” among other statements.

The Associated Press reports that in some instances the protesters clashed with organized right-wing groups, such as in the southern city of Katowice where riot police used tear gas to keep demonstrators on both sides under control. In Warsaw, “far-right nationalists” reportedly blocked the stairs leading to the entrance of the Holy Cross Church and prevented the pro-abortion protesters from entering the building.

Others describe the counter protests as an organic “bottom-up movement.” One Pole named Piotr, who was involved in protecting churches from the pro-abortion protesters, told LifeSiteNews he and others were “inspired by some people connected to [political party] Konfederacja, with a special involvement of people in the National Movement.”

“They decided to go into the streets to try to protect churches from being profaned or destroyed by the leftists. More people got involved, such as me ? I am not connected to any organization,” he said.

Piotr described how he and others patrolled the streets of Krakow, moving from one church to another and cleaning up debris and graffiti left behind by the demonstrators.

“Fortunately, there was no violence involved,” he said.

Elsewhere, the demonstrations have become violent. Another journalist who spoke to LifeSiteNews, Grzegorz Górny, said some protesters pelted police with stones.

“We are witnessing a great attack against Poland: in the European Parliament, in the Western media, among the EU political elite. Polish leftists have been organizing street demonstrations for four days, they are aggressive, throw stones at the police, destroy the offices of PiS MPs, paint offensive slogans on churches (and even on the Ronald Reagan monument in Warsaw), and disrupt Holy Masses,” Górny said.

“There were no voices of support from around the world for the Polish Constitutional Tribunal, the ruling right wing and Polish Catholics,” Górny added. “Nobody said it was a historic event. Nobody said that the Polish pro-life decision goes against all global trends.”

The chairman of the Polish Bishop’s Conference, Archbishop Stanislaw Gadecki of Poznan, called for “social peace” amid the unrest.

“The position of the Catholic Church on the right to life is unchanged; obscenities, violence and disrupting services as well as profanation are not the right method of action,” Gadecki said in a statement. “I ask everyone to express their views in a socially acceptable way.”

With the outlawing of abortions for fetal defects, the only permissible cases for abortion in Poland are in cases of rape, incest, or if the mother’s life is threatened.