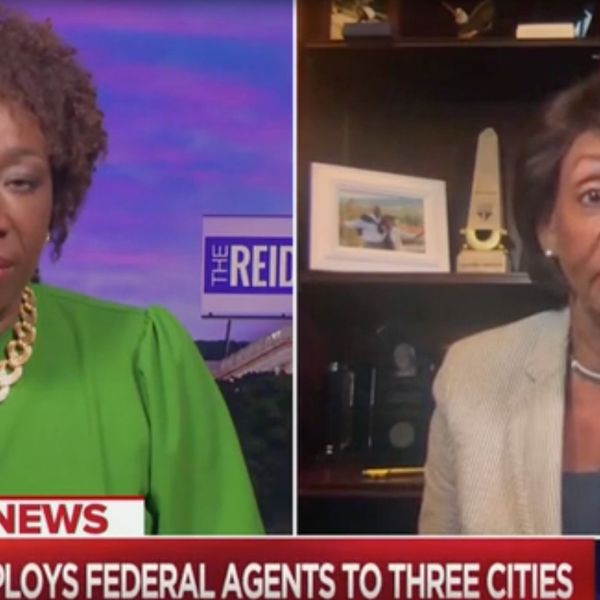 Rep. Maxine Waters (D-Calif.) says that President Donald Trump is ordering federal police officers to Portland, Oregon, amid nationwide riots as a test run for when he refuses to leave office.

Trump and Attorney General William Barr announced on Wednesday the deployment of at least 200 federal agents to Chicago, and other cities, including Albuquerque, New Mexico, in order to tamp down violence and enforce peace on the streets.

Waters, who appeared on Wednesday’s MSNBC broadcast of “The ReidOut,” told host Joy Reid that Trump is using such force in order to “not accept what happens when we have the election if he’s not elected.”

A visibly agitated Waters said, “The people of this country need to be worried about what we’re seeing in Portland. We have these police officers or whomever they are, offices of agents of some kind that’s been organized by the president of the United States. He didn’t contact the local mayors. He didn’t contact the governors. Who are these people? Why did they have these uniforms on?”

“We don’t have anything that identifies them,” she insisted. “They have unmarked cars. They’re pulling people off the streets into those cars.”

Waters added that Trump’s behavior is indicative of a garden variety dictator.

“In Third-World countries, you have dictators who have paramilitary that they can call anytime they want,” she warned. “As a matter of fact, it has been suggested that this is a trial run of the president of the United States who may be organizing to not accept what happens when we have the election if he’s not elected.

“Is he going to pull out his military?” the Democratic congresswoman fretted. “Is he going to engage us? He has already alluded to there may be a civil war if he’s re-elected. This is dangerous.”