This article was originally published by Tyler Durden at Zerohedge. 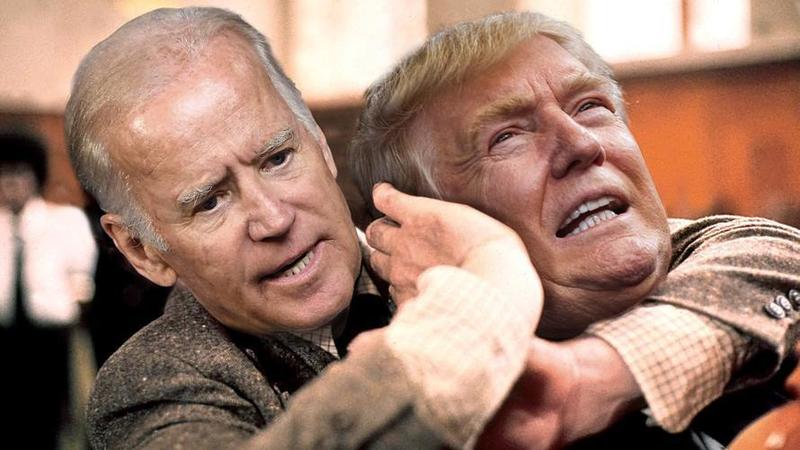 …and this is for all the marbles.

Only one state flipped (for now if Fox projections hold): Arizona for Biden.

NBC News projects that Democrats will maintain their control of the House of Representatives.

It’s looking less and less likely that the Democrats will take over the Senate. They lost crucial races in Montana and Iowa and their path is narrowing rapidly.

Jonathan Tamari of the Philadelphia Inquirer warned that:

“One huge red flag for Biden in PA: He’s currently trailing in Chester County, a key suburb that Clinton won by 25.5k – and Dems were counting on for a bigger win. Still a lot of mail ballots not counted there, but Biden needs to win big there.”

Biden addressed the nation at 0045ET:

“Your patience is commendable. We knew this was going to go long, but who knew we were going to go into tomorrow morning, maybe even longer. But look, we feel good about where we are. We really do. I’m here to tell you tonight we feel confident we are going to win this election.”

“We believe we’re on track to win this election,” Biden says.

“We can know the results as early as tomorrow morning but it may take a little longer. As I’ve said all along it’s not my place or Donald Trump’s place to say who wins the election, it’s up to the American people.”

“Keep the faith guys! We’re going to win this”

“We are up BIG, but they are trying to STEAL the Election. We will never let them do it. Votes cannot be cast after the Polls are closed!”

Adding that he will be making a statement tonight, “a big win!”

Trump delivered a statement at 0220ET. Trump says “millions and millions of people voted for us tonight, and a very sad group of people is trying to disenfranchise that group of people, and we won’t stand for it.”

He said he was getting ready for a “big celebration. We were winning everything and all of a sudden it was just called off.”

“We won states that we weren’t expecting to win.”

“Arizona we have a lot of life in that and somebody said — somebody declared it was a victory for him.”

“Most importantly we are winning Pennsylvania by a tremendous amount.”

“we had such a big night. You look at all the margins we won them by.”

“I said: What happened to the election, it’s off.”

“This is a fraud on the American public, this is an embarrassment to our country. We were getting ready to win this election, frankly we did win this election. So our goal now is to ensure the integrity for the good of this nation.”

“We’ll be going to the U.S. Supreme Court. We want all voting to stop. We don’t want them to find any ballots at 4 AM in the morning and add them to the list.”

As Victor Davis Hanson notes, the 2020 election is not just about Joe Biden sitting on a perceived lead and trying to run out the clock against barnstorming incumbent President Trump. It is really a choice between changing rules when they are deemed inconvenient and respecting constitutional norms and long-held traditions that have served America well for many years.

Additionally, Democrat Mark Kelly is way ahead of GOP incumbent Martha McSally in the Arizona Senate race. More than 10 points ahead with 73% of precincts reporting.

The Trump campaign is not happy at the early call from Fox. Campaign spokesman Jason Miller tweeted:

We only need 61% of the outstanding, uncounted Election Day votes in Arizona to win.

These votes are coming from “our counties,” and the 61% figure is very doable based on what our other Election Day votes are looking like.

@FoxNews should retract their call immediately.

AP is projecting that Tom Tuberville, a former Auburn University football coach, has won the Senate race in the red state of Alabama, unseating Democrat Doug Jones who won the seat in a special election in 2017. So that’s a pickup for the Republicans. The Democrats so far have picked up one Senate seat — Cory Gardner’s in Colorado.

Meanwhile over at PredictIt…

Some folks are gonna be upset…

Trump has picked up votes among black and Latino Floridians over Clinton.

Meanwhile, we may be seeing our first House seat flip of the night as freshman Democrat Debbie Mucarsel-Powell is losing to Republican Carlos Gimenez in Florida’s 26th congressional district with 83% of precincts reporting.

Here are the deadlines in battleground states:

Axios reports when each state official has said we can expect unofficial election results:

On election night itself, Michael Snyder says the most important state to focus on will be Florida.  As I discussed in a previous article, Florida is one of the states that allow mail-in ballots to be counted in advance, and we should have a really good idea of what the results are going to look like in the state by the end of the night.

If Biden is declared the winner in Florida on election night, that is going to be a really, really bad sign for Trump.  There really isn’t a path to 270 electoral votes for Trump without Florida.

If Trump wins Florida, or if the vote is too close to call, then Pennsylvania becomes crucially important.

Unfortunately, Pennsylvania is one of the states that does not allow mail-in ballots to be counted in advance, and they are going to have millions of them to count.

At this point, Pennsylvania Governor Tom Wolf is openly admitting that “it may take longer than usual to count every vote”…

‘These are unprecedented times. Because of the coronavirus, there were millions of votes cast by mail so it may take longer than usual to count every vote,’ he says in a new ad for the nonpartisan group, The Voter Project.

‘The folks in our election offices – your neighbors, family and friends are working hard ensuring every single vote is counted,’ he says.

Pennsylvania is supposed to have every vote counted by Friday, but we are deeply skeptical.

“We continue to have multiple pathways to 270 electoral votes” says they can win 270 even without PA and FL,” according to Time’s Charlotte Alter.

Or follow along with Matt Taibbi and Katie Halper as they drink and comment on the state-by-state counts (but definitely do not declare any victory).

As Matt Taibbi writes, in life, as in cult sci-fi/adventure thrillers starring Geneva’s own Christopher Lambert, winner takes all:

Unfortunately, there are good reasons to doubt we’ll see anyone’s head fully lopped off this evening. The enormous number of mail-in votes, coupled with a slate of conflicting state rules about when such votes are counted – added to a high likelihood of unpredictable logistical difficulties associated with the pandemic – make a delayed conclusion to the Trump-Biden electoral contest very possible.

Usually, high in-person turnout favors Democrats. This year, because so many Democrats voted early (and Republicans have been warned away from mail ballots), the situation will likely be reversed. This means we could very well have early results that look confusing, maybe even like a wipeout for Trump, when what we’re actually seeing is just in-person votes being counted faster than mail votes. We also could see opposite scenarios.

Overall, the likelihood is that Joe Biden will win, and comfortably, but the issue is when that result comes in. Imagine the chaos of the Iowa Democratic caucus, with all the attendant scarcely-believable explanations coming from officials and vote-counters, expanded to presidential scale. That’s the horror-movie scenario for this evening.

Because of the fear both sides have about the results, the quantity of media spin tonight is likely to be, as rule 7 below notes, “unprecedented.” Partisans from both red and blue camps will be prepping audiences for bad news in ways that deflect blame from their own consultant pals, and also planting seeds for arguments likely to be made in contested-result scenarios. Expect Republicans to tell tales of trucks of fake ballots shipped over the Rio Grande in burlap sacks, while Democrats might counter with photos of wheelchair-bound minority voters invited to exercise their democratic covenant at ad-hoc ballot stations re-located to the top of hundred-foot climbing walls.

The main rule is implied: just start drinking and don’t stop for the next few years.

As for tonight specifically, here goes:

Drink for EVERY MENTION of:

4) “Most important election of our lifetime”;

8) “Firewall.” Double if this is accompanied by an awkward effort by an anchor to inoffensively characterize the minority voting bloc to which they’re ascribing monolithic voting tendencies;

12) “It all comes down to Pennsylvania.”

13) A commentator says “(something) is on the ballot tonight,” and that something is not the name of a candidate;

14) John King looks visibly aroused on the way to the Magic Wall;

15) A member of the media uses the word “we” to describe Democratic Party results;

16) A Republican accuses Democrats of stuffing ballots. Double if the alleged plot involves the use of undocumented immigrants as sham voters;

17) A Democrat mentions voter suppression. Double if this is accompanied by a warning that this is the “only way” Trump could win;

18) Any commentator suggests Trump will not give up power if he loses;

19) Someone reports the possibility of results-delaying litigation over a new set of voting irregularities detected today;

20) A commentator reacts to a result by seriously wondering aloud if Russians are meddling;

21) There is a video of Melania Trump looking a little too happy that her husband is losing;

22) Trump ups the ante on an outrageous lie about his opponents at the 11th hour, like that Biden has already written an executive order canceling free enterprise, or has decided to grant American citizenship to everyone in Bangladesh;

23) Biden says something incomprehensible, dozes off or forgets whom he’s talking to within a TV appearance;

24) Someone cuts to a shot of boarded-up windows. Double when windows are actually broken.

25) Someone cries on set as results come in. Or, alternatively, does the political version of the Bill Simmons fist pump:

Finally, we fall back to Buckminster Fuller’s infamous quote for some context tonight:

If you take all the machinery in the world and dump it in the ocean, within months more than half of all humanity will die and within another six months they’d almost all be gone; if you took all the politicians in the world, put them in a rocket, and sent them to the moon, everyone would get along fine.

Stay safe and remember that politics is all about subverting you emotionally and then reaping your production. The rest are details.

The post 2020 Election: Trump Blasts Vote-Count Delays As “Fraud On The American Public” first appeared on SHTF Plan – When It Hits The Fan, Don't Say We Didn't Warn You.