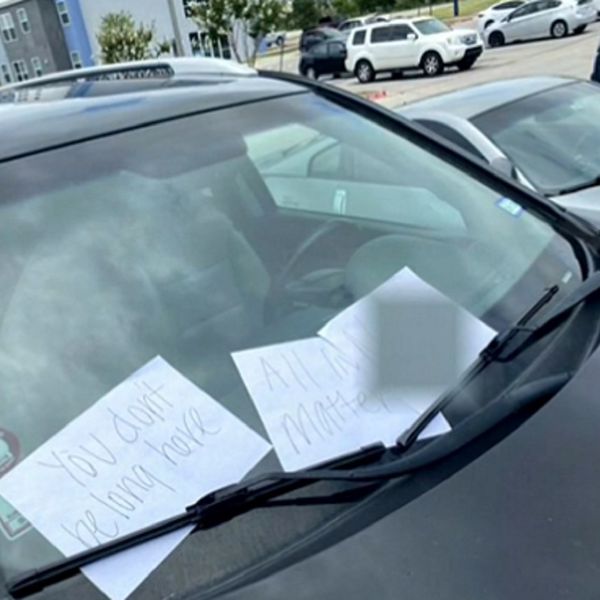 A Texas A&M student made headlines last month after claiming someone plastered papers with racist messages on the windshield of his car.

Police launched an investigation, and discovered that the most likely suspect is the alleged victim, himself.

Student Isaih Martin told KBTX-TV a few weeks ago that he found hateful notes on his car, which was parked at an apartment complex on school property. He took photos of the messages placed on his vehicle, and posted them on Twitter.

“All three signs were different signs, and one said ‘All Lives Matter’ and the other said ‘You don’t belong here,’ and the other was very explicit, it said the n-word with a hard ‘r’,” Martin recalled. “For them to tell me I don’t belong here, when I have earned my spot like everybody else here, and am working to get a degree like everyone else is, that was just kind of hurtful because if anything I deserve to be here just as much as anybody else.”

He added, “Racism is here in College Station and that problem needs to be addressed and brought up and needs to be fixed.”

Texas A&M President Michael Young released a statement condemning the “detestable racist event,” and the school apologized to Martin and offered a $1,200 reward for information pointing to those responsible for the notes.

On Thursday, Texas A&M police reported that after reviewing surveillance footage, it appears “no other person had enough time to place the message on Martin’s car other than himself.”

Officers did not release the video, but described it in detail, noting that Martin was seen on camera walking to the side of the vehicle without opening the door and then “white specks” were seen moving from Martin “toward his vehicle.” Police added that “Martin is then seen stepping back and onto the sidewalk in front of his vehicle, most likely taking photos and videos.”

In a follow-up story, KBTX reported that Martin vehemently denies having any involvement with the notes, and that he has faced “increased skepticism” online, “especially after announcing this week he consulted with an attorney and was no longer speaking with police.”

The investigation has now been closed, and police say the county attorney’s office informed them the incident did not qualify as a false report because Martin did not report a crime.