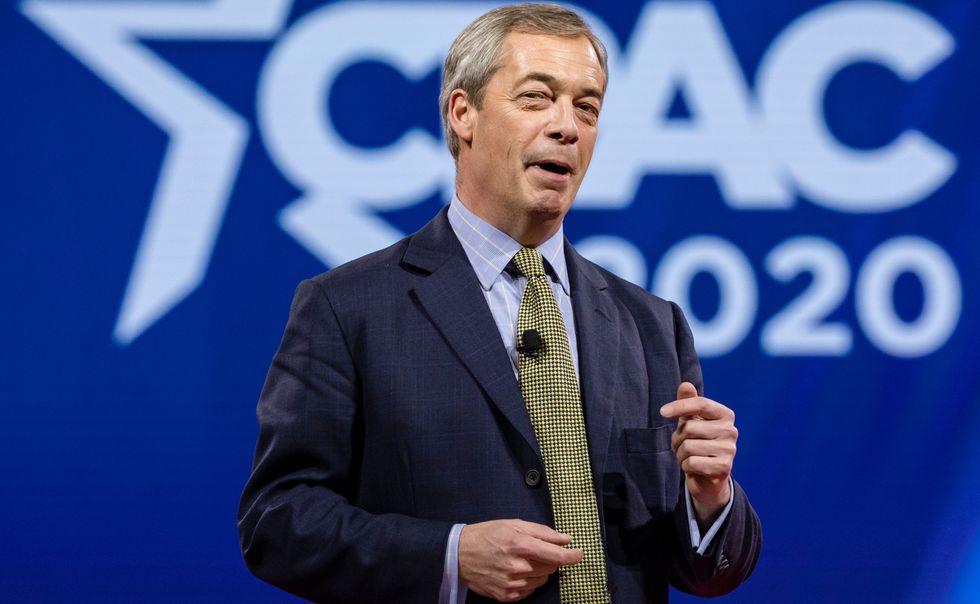 The U.K. has seen its own protests and riots in the days following the killing of George Floyd.

In a video on his YouTube channel, Farage said that the Black Lives Matter movement is “Marxist,” and its recent actions across the region have left him “utterly appalled.”

Over the weekend, protesters defaced property and toppled a statue of Edward Colston, an English merchant, slave trader, former member of Parliament, and philanthropist.

“For the second day in a row, Winston Churchill’s statue in Parliament Square [has] been defaced,” he said. “A mob around the statue screaming ‘Churchill was a racist.’ We saw another assault on the Cenotaph, this time with some yob climbing up there and trying to set fire with a cigarette lighter to the Union Flag. These were just some of the highlights from what happened in the United Kingdom.”

Farage also blasted the BBC for playing up to the Black Lives Matter movement, making it seem that its members are all “so peaceful and so wonderful” despite recent protests that saw scores of police officers injured.

“My argument here isn’t against equality of opportunity,” he said. “It’s not to say there aren’t still things that aren’t perfectly fair — but it is to say this, and to say it very, very clearly: This Black Lives Matter movement is a dangerous, Marxist organization, hell-bent on anarchy, and we need to wake up, get some facts into our heads, and understand what it is we’re fighting.”

Farage pointed out that it seems one of the group’s primary aims is to defund police forces.

“They want to effectively close down the established police force in the United States of America,” he explained, “and that’s what the key activists in this country want to do as well.”

He also insisted that the group is looking to enact a “radical redistribution of wealth.”

“This is a little bit like the 1917 Lenin manifesto which saw the communist revolution in Russia,” the leader added. “That’s the kind of thing that we’re dealing with here, and it’s very heavily funded — they’re not short of money; they’ve got some big backers, Soros, others … who want to fundamentally overturn the norms of society as we see them today.”


Say no to anarchy on our streets.

On Tuesday, the panelists on “Good Morning Britain” addressed Farage’s remarks, as well as the recent protests in the country.

Farage himself also appeared on a segment of the hit daytime TV show, where he hit back at co-host Piers Morgan and guest professor Kate Williams for their criticism of his remarks on Black Lives Matter.

He repeatedly insisted that the Black Lives Matter movement’s “chief aim is to defund and close down police forces.”

Morgan blasted Farage’s remarks as “incendiary” and said that the Black Lives Matter movement should never be compared to the likes of the Taliban terrorist organization.

Williams spat, “You are inciting racism, and this is outrageous.”

Attorney and activist Dr. Shola Mos-Shogbamimu, who also appeared on the Tuesday panel, voiced her outrage.

“You’re full of such utter nonsense, Nigel Farage,” she said. “I understand that you’re struggling to be relevant. The only thing you’re an expert right now is your backside, because every word out of your mouth stinks.”

“BLM represents a fight against racism in this country,” Mos-Shogbamimu insisted.

She later added, “Nigel Farage is a racist.”