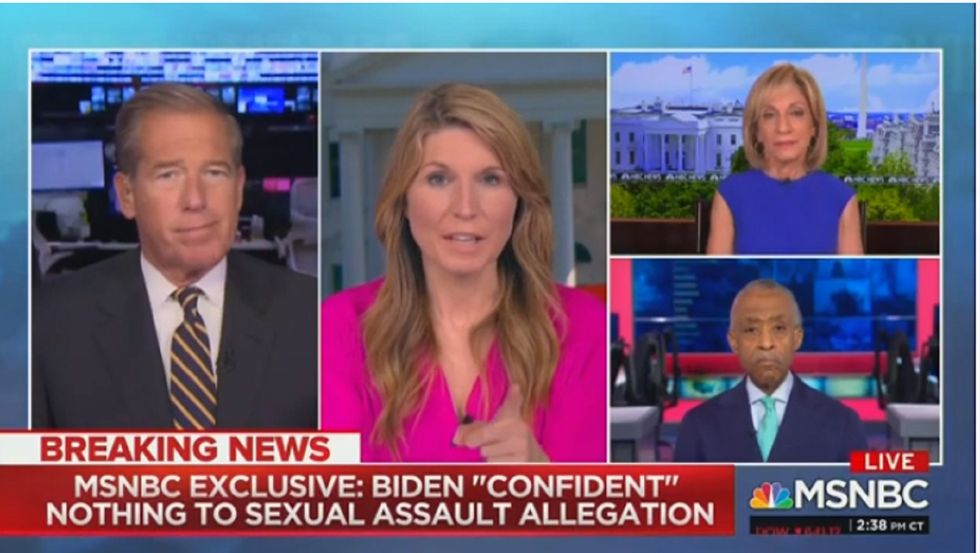 Presumptive Democratic presidential nominee Joe Biden appeared on MSNBC on Friday morning to deny a 1993 sexual assault allegation leveled against him by former Senate aide Tara Reade after several weeks of silence on the issue.

By the afternoon, host Nicolle Wallace told viewers that Republicans are not really interested in whether Reade’s claim against the former vice president is true, and that “the right is running a smear campaign against Joe Biden.”

Reacting to Biden’s denial from earlier in the day, Wallace said, “Let me just say this to you having once been a part of the Republican Party: The right isn’t running an intellectually honest operation to get to the bottom of whether Tara Reade was victimized. The right is running a smear campaign against Joe Biden.”

“The right wants to create some sort of equal playing field on which [President] Donald Trump’s more than two dozen, or nearly two dozen accusers sort of have some company on the other side,” Wallace asserted.

She added, “The right is not running the same operation that the Democrats are running, which is to try to…have some consistency around statements that I think just about every elected Democrat has made about women in the context of the #MeToo movement.”

Wallace has been a consistent critic of President Trump, and was one of several interviewers who refused to ask Biden about Reade’s allegations during his on-air appearances since the sexual assault claim was brought to light in March. 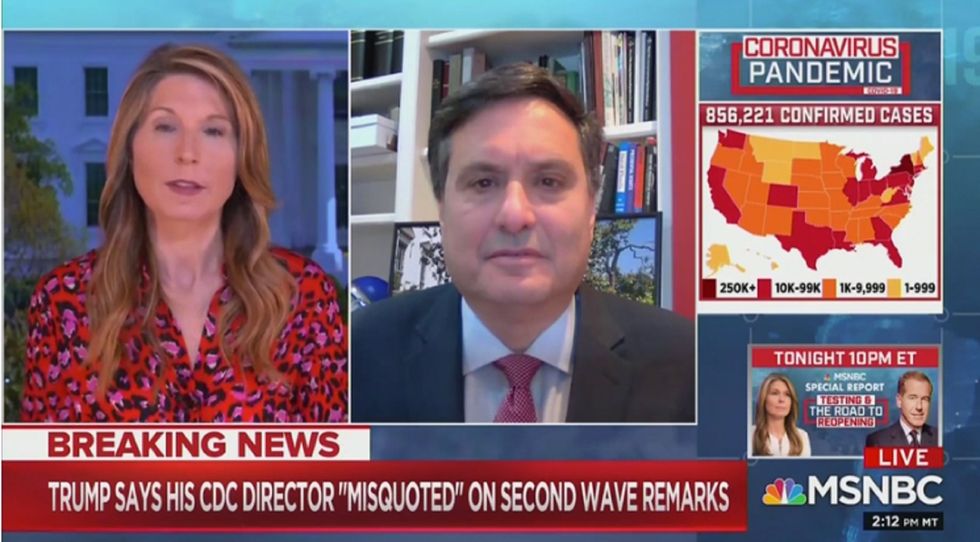 MSNBC host Nicolle Wallace suggested Thursday that despite the deaths of tens of thousands of Americans and widespread economic devastation brought on by the coronavirus, the “silver lining” might be that the pandemic could hurt President Donald Trump politically.

Speaking to a guest on her show, “Deadline: White House,” Wallace said:

There is something both tragic, and pathetic, and ironic about the fact that it took a, you know, color-blind, gender-blind, state-line-blind virus to sort of have all of the president’s sins from his first three years catch up with him. You can’t stand there and lie. You can’t contradict your scientists because they’re the ones that stand at 66 and 68 percent public trust, not you. He’s down at 38 percent. Pence is lower than him. I mean, he needs those people whether he likes what they say or not and I wonder what you think about whether or not there’s some silver lining there, that some of the things that, that we’ve been talking about for three years may be finally catching up with him?

Media Research Center shared a video of her comments:

It is unclear what “public trust” poll Wallace was referring to. As of Thursday, RealClearPolitics‘ average polling showed President Trump had a 43.4% favorable rating among Americans.

Wallace has a solid record of criticizing the president, and she has gleefully speculated before over the possibility that the coronavirus crisis could be “Trump’s Katrina.” 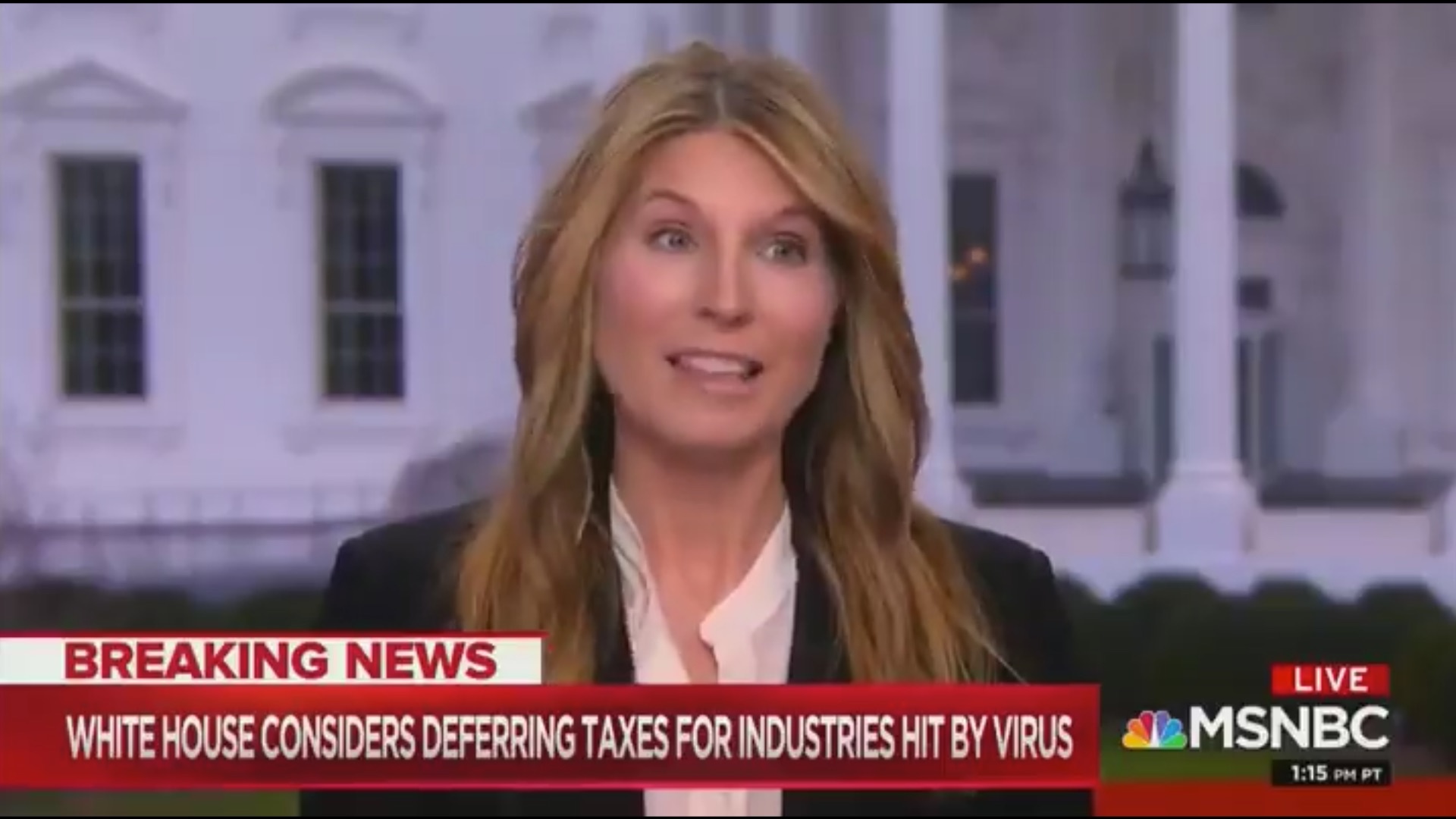 As coronavirus infections explode in the Western world, an MSNBC panel speculated on Friday whether the disease would damage President Donald Trump politically.

In fact, panel guest Eddie Glaude Jr., a Princeton University professor, wondered if coronavirus is “Trump’s Katrina,” a reference to the Bush administration’s sluggish response to Hurricane Katrina that resulted in vehement criticism.

“I was thinking about this in terms of politics, the business community, kinda finally not sticking with Donald Trump. This may be, you know Nicolle, I should mention this with a little trepidation, but this may be Donald Trump’s Katrina,” Glaude said.

MSNBC host Nicolle Wallace was downright giddy at the prospect.

“Let’s just lean into that for a minute. Katrina was the moment when all of the things that felt incredibly incompetent about the Bush presidency … were realized,” she responded.

Wallace — who was the White House communications director when Hurricane Katrina made landfall — went on to claim Bush’s response to Katrina gave his critics a “proof point” that he was “incompetent.”

“And also people died,” Wallace continued. “This has the makings, structurally, for the same kind of moment for President Trump.”

Later, Glaude claimed that coronavirus “is an event that could take down a president.”