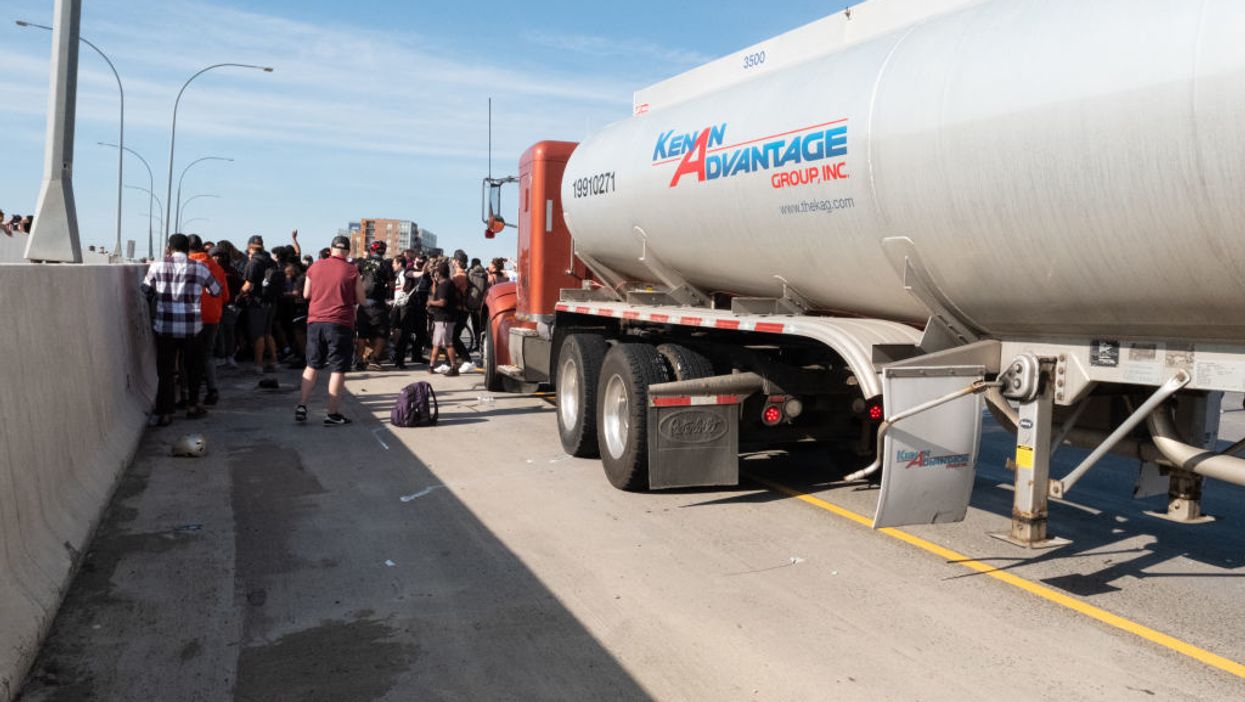 Try to imagine if a group of white supremacists decided to riot in middle of one of a state’s busiest interstate highways without any warning or time for police to block off traffic. Then an unsuspecting motorist gets caught up in the illegal roadblock, tries to swerve to miss rioters, and ultimately grinds the truck to a halt. Next, the rioters drag him out of the truck and beat him. By this point, you are probably trying to envision how many of the protesters would be charged with attempted murder, among other crimes. But because this was a Black Lives Matter protest, Hennepin County, Minnesota, is now charging the driver with felonies and misdemeanors, not those who committed this dangerous and dastardly crime.

Since the BLM rioting began, we have seen horrific videos of motorists, often truckers, being harassed by illegal blockades, often presented with agonizing choices between trying to calmly leave the situation, stopping the car, or stepping on the gas pedal. The first such incident occurred when video circulated on the internet on May 31 showing Bogdan Vechirko’s truck getting mobbed by protesters at a bridge on I-35 west, the major interstate out of Minneapolis.

Seeing their belligerence clawing at the truck and, according to Vechirko’s lawyer, a protester firing a gun, I know I would have stepped on the gas pedal to save my life. Instead, he actually wound up stopping to avoid hitting people, even though he was unaware of what was going on, and was dragged out of his truck and beaten. He, rather than his assailants, was arrested at the time, which was egregious enough. But he was released because it became clear that there were no police roadblocks set up on the ramp when he entered the highway and that this was not a premeditated act.

Fast-forward to Thursday, when Hennepin County Attorney Mike Freeman’s office charged Vechirko with threats of violence, a felony, and criminal vehicular operation, a gross misdemeanor. I expected the Minneapolis Star Tribune to proceed to report the evidence that somehow showed Vechirko was a neo-Nazi who plotted to identify protesters and run them down. No such evidence exists, which is why he wasn’t charged with attempted murder. Investigators concede that there was no way he could have known about this or avoided this terrible situation because the entry ramp was not blocked off. What is their contention?

After spending a hefty sum to re-enact the situation, “investigators found Vechirko’s line of sight would have given him sufficient time to stop his truck after viewing the crowd. But he didn’t stop until someone stumbled in his path.” They say he admitted that he was “kind of in a hurry” and the investigation showed, according to the criminal complaint, that he sought to “scare” the protesters out of his path.

Well, no kidding. If I am confronted with a belligerent mob on an interstate highway with no way to turn around (especially for a tanker truck), I’m going to try to scare them into moving away. What was he supposed to do? Just stop immediately and get beaten? We see that, ultimately, he did stop after first trying to maneuver around the crowd. Nobody was injured except for him. He wound up taking a beating that could have ultimately been as bad as that of Reginald Denny during the L.A. riots in 1993 rather than run them over. If anything, he showed enormous restraint in the face of a potentially fatal threat.

The Star Tribune notes that “the charges five months after the incident came as somewhat of a surprise” because transportation officials seemed to exonerate him. This demonstrates that there is a lot of justice-contorting politics taking place in that prosecutor’s office. Even if they somehow discovered facts in the case that justify these charges, why weren’t any of the rioters charged for such a serious public safety crime?

The Star Tribune observes that “the Minnesota Department of Transportation (MnDOT) had been directed to seal off interstate ramps by 5 p.m. to protect the marchers” and that, ultimately, “none of the protesters who attacked and injured Vechirko were charged.” But why were they trying to protect people who dangerously shut down a highway rather than apprehending them and charging them?

This is part of a broader problem that blue city governments are now legitimizing the most lawless acts of BLM by criminalizing those who defend themselves against their roadblocks, rather than enforcing basic public safety laws against the perpetrators. If you are on the side of BLM, you have the power to riot, destroy, threaten, and beat with impunity, but if you defend yourself against them, you will be swiftly punished.

Anyone who, without a permit, obstructs an interstate highway forfeits their life. It’s hard to imagine that Vechirko was some sort of professional white supremacist, as liberal reporters suggest every time these incidents occur. Several days after this incident, a black businesses owner, Lonnie McQuirten of 36 Lyn Refuel Station in Minneapolis, stated that Vechirko had been coming back from a fuel run to his business when he was caught by the mob on I-35.

These people suck. The driver just left my store doing me, a black business owner a favor. You should be ashamed of… https://t.co/qvXeBG0HP7

What we have in this country is the breakdown of equal protection under the law, which has been supplanted by a racially motivated system that weighs political and identity outcomes over facts and public safety. Sadly, parts of Minneapolis have been reduced to rubble, and barely anyone has been held accountable. It’s turning into a third-world country. Except that in those countries, if you are confronted by a mob, you are unlikely to face prosecution for trying to evade a brutal lynching.