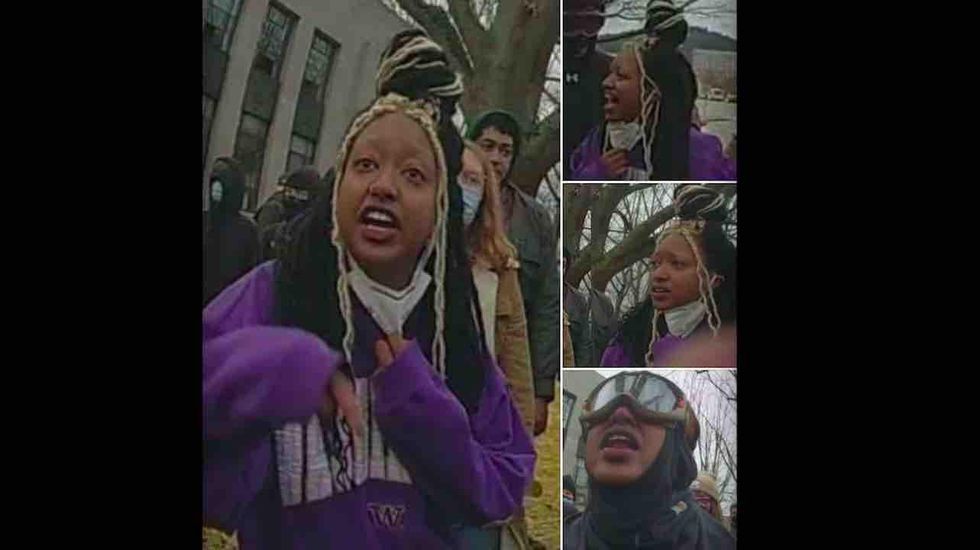 Police also released bodycam video of the standoff, which shows the suspect shouting at and attempting to spit at officers, the station said. She appears to show up — her eyes covered by goggles and her head covered — just after the 2-minute mark.

“You f***ing disgust me!” she yelled before spitting at cops:

A larger male ally soon led her away as she continued to scream, “Lemme at ’em! Lemme at ’em!”

Oh, but this individual appeared to be far from the only troublemaker. The video shows police being abused pretty much at will by the militant leftists.

In one scene another woman appears to spit at officers:

Then she appears to do it a second time. In the second spitting photo, she appears to be accompanied by the suspect police are after — who this time is dressed in purple:

And at one point a cop firmly told a green-haired woman to ‘stop!’ after she continually rammed into him. Her comrades just laughed at the order.

During most of the 10-minute video, leftists — besides the spitting — attempted to keep police from advancing on the encampment and consistently push, hit, threaten, and taunt them.

Bellingham officials ordered the removal of the homeless encampment ahead of schedule Jan. 28 after reports of possible violence by “outside agitators” from Portland and other cities.

Officials said public workers were being harassed and that the growing encampment was engulfing the city buildings.

Bellingham Police Department Chief Flo Simon said there were as many as 100 tents in the encampment on city property. Police had responded to calls in relation to the encampment in recent weeks that involved attacks with a baseball bat, a hatchet, and sticks. Simon also said a propane tank ignited a fire at the site.

Several arrests were made amid the skirmishes, and there were reports of some assaulted officers.