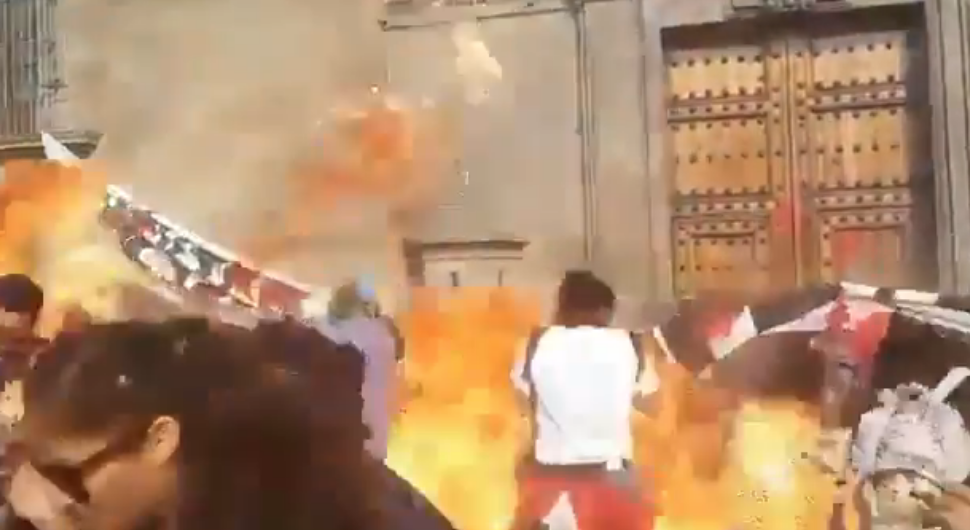 The violence was a part of a day of protests where 80,000 people marched through Mexico City’s historic center — as well as many other places across the country — protesting for greater access to abortion as well as an end to violence against women.

According to Reuters, outside the National Palace and Mexico City’s main cathedral, women activists wearing green bandanas symbolizing support for abortion clashed with counter-protesters, some reportedly with “shaved heads” who gave Nazi salutes. The women tore down banners that depicted abortion as femicide and then set them ablaze as they traded insults with counter-protesters.

One female protester was caught on video launching a Molotov cocktail into a crowd that included a group of policewomen in riot gear. The firebomb set on fire a female photographer who was later hospitalized with second-degree burns.

Elsewhere in the city center, masked protesters smashed the windshield of a car with hammers, overturned a van, and burned buildings, Reuters reported.

Protesters also sprayed graffiti on buildings, including the National Palace, where the president lives. Some graffiti messages said “the president doesn’t care about us” and “misogynist AMLO,” referring to President Andres Manuel Lopez Obrador.

Churches were also vandalized in other parts of Mexico

In Sonora, Mexico, feminist protesters attacked a local cathedral, smashing its windows and attempting break down the doors as families celebrated mass.

Two videos of the incident included in a report from ACI Prensa, a Catholic Spanish news outlet, show the outside of the cathedral vandalized with graffiti and protesters attempting to break in as churchgoers barricaded the door with benches.

Inside the cathedral, churchgoers can be seen scrambling to protect their families as outside protesters loudly bash the door and smash the windows.

According to ACI Prensa, protesters launched similar attacks on cathedrals in Campeche and Motolinia and on a monument in Guadalajara. LifeNews, in its report on the violence in Mexico, posted Twitter videos of the incidents in those places.

Besides demanding more access to abortion, protesters in Mexico were also responding to the increase in femicides in the country, which, according to Reuters, has risen 137% over the past five years.

“They’re killing 10 women a day — the ones that we know about — in the country I’ve lived in my whole life, it’s unacceptable,” preschool teacher Daniela Garcia, 33, told Reuters.