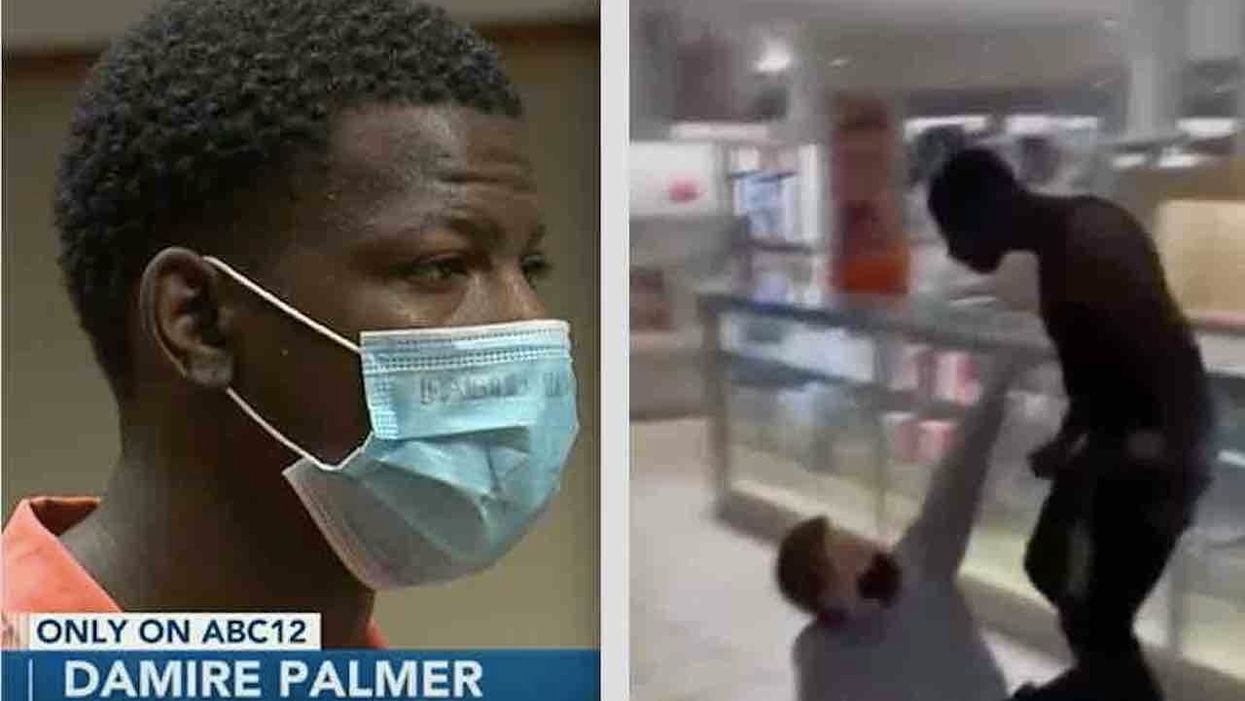 The 18-year-old man accused of beating up a Macy’s store manager in June — an incident caught on video that went viral — pleaded guilty to the charge against him Wednesday, WJRT-TV reported.

The defendant, Damire Palmer, also gave his testimony in court as part of a plea agreement, the station said. 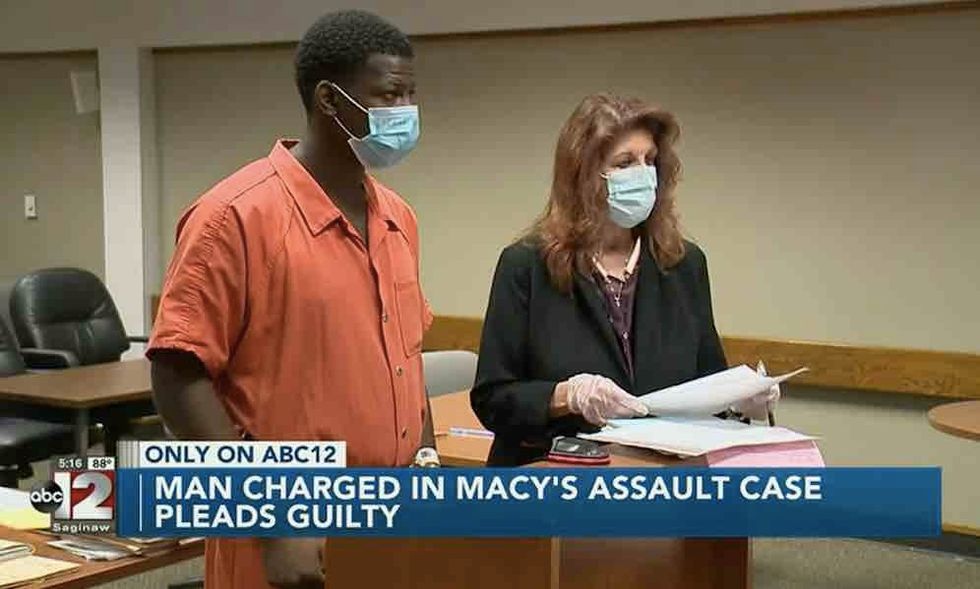 So after pleading guilty to assault with intent to do great bodily less than murder, Palmer told the court what led to his attack against the store manager inside Michigan’s Genesee Valley Mall, WJRT said.

Here’s the clip of the attack. (Content warning: Racial slurs from the attacker):

A man at a store in #Flint allegedly referred to a Black man in the store as a “n***er” while talking on the #phone… https://t.co/moG77PYFHK

“I asked him a question about some clothes,” Palmer said, according to the station. “I asked him about the jacket type that I was about to get.”

“Why would your brother do that?” the assistant prosecutor asked, the station said.

“I wouldn’t know,” Palmer replied, according to WJRT. “I honestly wouldn’t.”

Genesee County Prosecutor David Leyton told the station that the Macy’s store manager — who’s still dealing with the trauma of the assault — didn’t want to take the stand.

So they decided on a plea agreement — and part of it was the victim’s request to spare Palmer a permanent felony record. So Palmer’s felony charge will be dropped once he serves his sentence and be replaced with a misdemeanor charge of aggravated assault, WJRT said.

“Basically, you beat this guy so bad he was quite bloody, correct?” the assistant prosecutor asked, the station said. 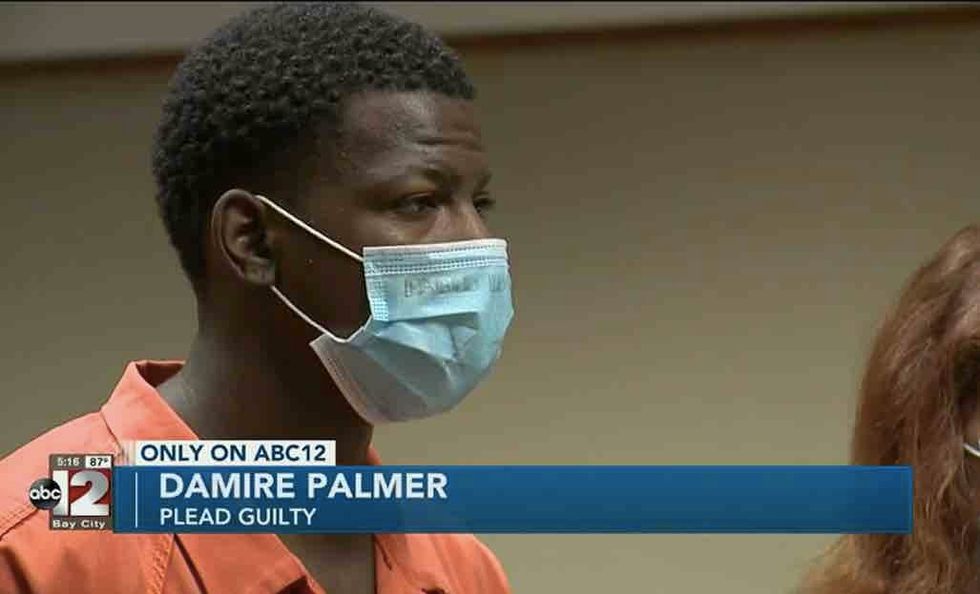 “And did you know that he has agreed that you should be treated as a youthful offender even though you beat on him like that?” the assistant prosecutor asked, WJRT said.

“No, I did not know that,” Palmer responded, according to the station.

“Do you understand what kind of break that man gave you?” the assistant prosecutor asked, WJRT reported, adding that Palmer replied, “Yes.”

Palmer’s punishment is in the hands of a circuit court judge, the station said, adding that Leyton indicated it could end up being anything from probation to 10 years behind bars.

“Nobody’s looking to hang felonies on young men,” Leyton told the station. “I never have, and I never will. This was a bad crime though, and he has to face the consequences.”

Leyton also noted to WJRT that Palmer’s older brother could still be charged, and that his office will be reviewing Palmer’s testimony to help them make that decision. 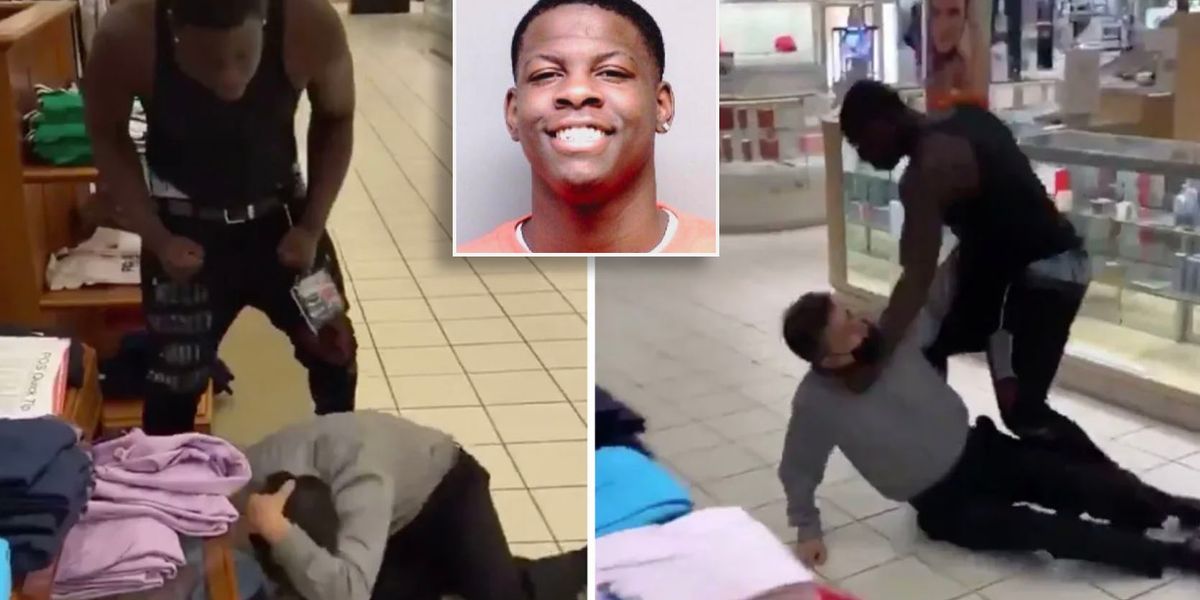 An 18-year-old man, who was charged in an “unprovoked attack” on a Macy’s manager in Michigan, was arrested on Thursday night.

Damire Canell Palmer was charged with felony assault with intent to do great bodily harm less than murder on June 26. The charges stemmed from the vicious June 15 attack on a Macy’s employee at the Genesee Valley Center shopping mall in Flint Township.

The physical assault was captured on video and went viral last month. Cellphone video shows the aggressor landing several punches on the 50-year-old Macy’s manager, and knocking him to the ground.

Surveillance video from Macy’s reportedly shows Palmer walking around the department store before he approaches the manager in the men’s clothing section and then punching him in the head.

There were allegations that the manager, who is white, said a racial slur toward the suspect, who is black. Genesee County Prosecutor David Leyton said investigators did not find any evidence of the Macy’s employee making racial comments or doing anything to provoke the attack.

“This was an unprovoked attack on a Macy’s employee,” Leyton said on June 26. “This behavior, as seen on the video, is unacceptable, it is criminal and it cannot be allowed.”

“We don’t believe any racial slur was made by the store manager, and even if there had been, it does not condone nor justify the assault by Mr. Palmer,” Leyton added.

“Violence in the workplace of any kind is unacceptable,” Andrea Schwartz, senior director of media relations for Macy’s, said in a statement last month. “All the materials from the evening have been reviewed and it is clear that the attack was unprovoked. We are working closely with local authorities on this investigation and will defer any further comments about the case to them per policy.”

President Donald Trump retweeted the video of the attack on June 22. “Looks what’s going on here,” he tweeted. “Where are the protesters? Was this man arrested?”

Palmer, who is from Mount Morris, was also was charged with misdemeanor retail fraud. Felony assault with intent to do great bodily harm less than murder carries a maximum prison sentence of 10 years.

Palmer’s brother, who filmed the video, will likely not be charged since he did not commit any crimes, according to the New York Post. 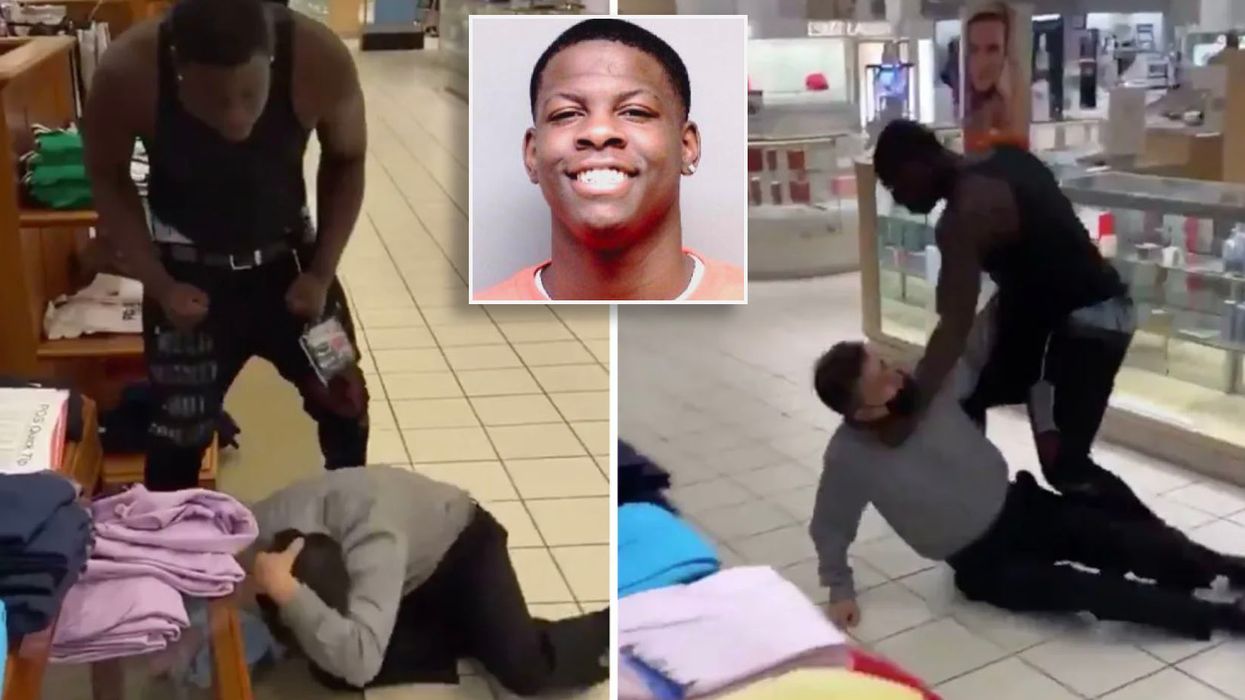 The crime is a felony and carries a maximum prison sentence of 10 years.

#BREAKING — Charges issued for attack of a Macy’s employee inside the Genesee Valley Mall.
?? 18yo Damire Palmer f… https://t.co/dpGWPEOiCw

In a viral video, Palmer is allegedly seen brutally beating a Macy’s store manager in Flint. Palmer’s brother, who filmed the attack, later claimed the victim called his brother the N-word, which provoked the attack. However, Macy’s debunked the claim after investigating the June 15 incident, explaining the attack was completely “unprovoked.”

Police have been searching for the brothers for more than a week, but they have yet to locate them.

At a press conference, Leyton confirmed the attack was unprovoked.

“This was an unprovoked attack,” Leyton said. “The internal video for Macy’s shows the suspect approaching from behind the victim. The store manager appears unaware that he’s even there.”

In fact, the district attorney explained that Palmer and the victim called prior to the attack, when Palmer asked if a jacket fit him.

Regarding the accusation that the store manager used a racial epithet, Leyton said there was no evidence proving that happened — and even if it had occurred, the use of racial slurs do not legally permit assault.

“Even if there were verbal provocation, which we have no evidence of, violent retaliation is not permitted by the law,” Leyton explained, WJRT reported. 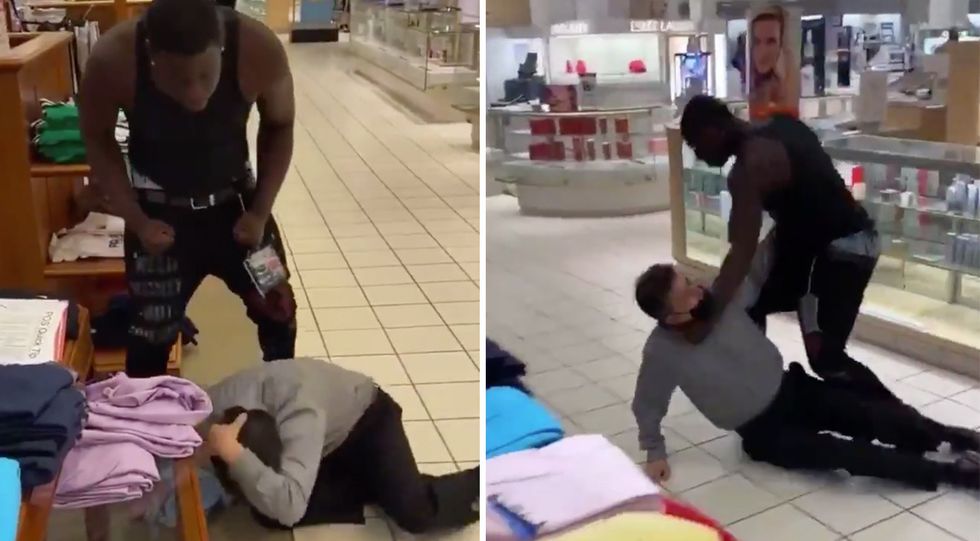 A video of a Black man viciously beating a white man in a Michigan Macy’s department store went viral last week. The man who filmed the beatdown claimed the white man, a store employee, said the N-word, therefore provoking the attack.

That man, a 22-year-old rapper whose brother is responsible for the beating, told the New York Post that his brother was driven by “instinct.”

“Just the fact of the remark that he said that we all heard. And just, what else were we supposed to do? In this age and time, he didn’t know what else to do. That was just his instinct,” the rapper said.

However, Macy’s is disputing their version of events. In fact, the department store said the attack was “unprovoked.”

We are deeply saddened about the incident that took place on Monday (June 15) at Macy’s Genesee Valley as the safety of Macy’s customers and colleagues is our top priority.

Violence in the workplace of any kind is unacceptable. All the materials from the evening have been reviewed and it is clear that the attack was unprovoked. We are working closely with local authorities on this investigation, and will defer any further comments about the case to them per policy.

According to local media, police are actively searching for the attacker and the man who filmed the brutal attack. 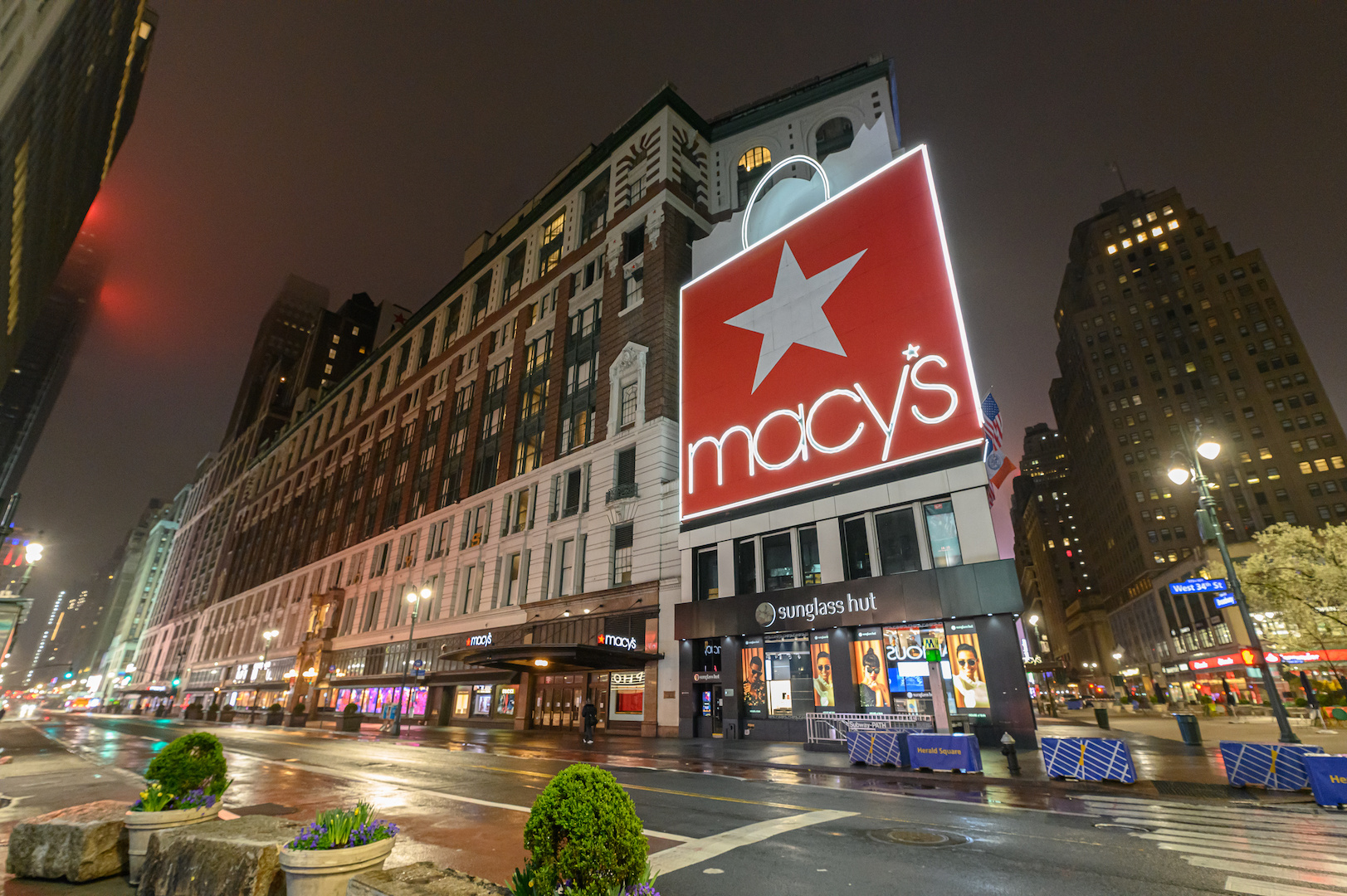 Macy’s announced it would furlough a majority of its employees in order to stay afloat in an economy devastated by the coronavirus and the lockdown measures that are keeping most Americans at home almost all the time, The Hill reported.

The company employs approximately 130,000 people. For the foreseeable future, only those essential to basic operations will be kept on board. Those employees will be concentrated in the company’s online business.

All Macy’s stores closed March 18, and there is no set timetable for when they might reopen. The company has attempted other cost-cutting measures, but said more cuts were necessary.

“While the digital business remains open, we have lost the majority of our sales due to the store closures,” a company statement read. “We’ve already taken measures to maintain financial flexibility, including suspending the dividend, drawing down our line of credit, freezing both hiring and spending, stopping capital spend, reducing receipts, cancelling some orders and extending payment terms, and we are evaluating all other financing options.

“While these actions have helped, it is not enough. Across Macy’s, Bloomingdales, and Bluemercury brands, we will be moving to the absolute minimum workforce needed to maintain basic operations,” the statement continued. “This means the majority of our colleagues will go on furlough beginning this week.”

Furloughed employees will have health benefits, paid for by the company, through the end of May. The company didn’t specify when it anticipated bringing people back, but said employees would return “on a staggered basis as business resumes.”

The $2 trillion stimulus bill signed into law by President Donald Trump last week aims to minimize unemployment by supporting struggling businesses so companies don’t have to lay off so many employees.

“Go back and hire your workers because the government is paying you to do that,” Treasury Secretary Steve Mnuchin said Sunday, CNN reported.