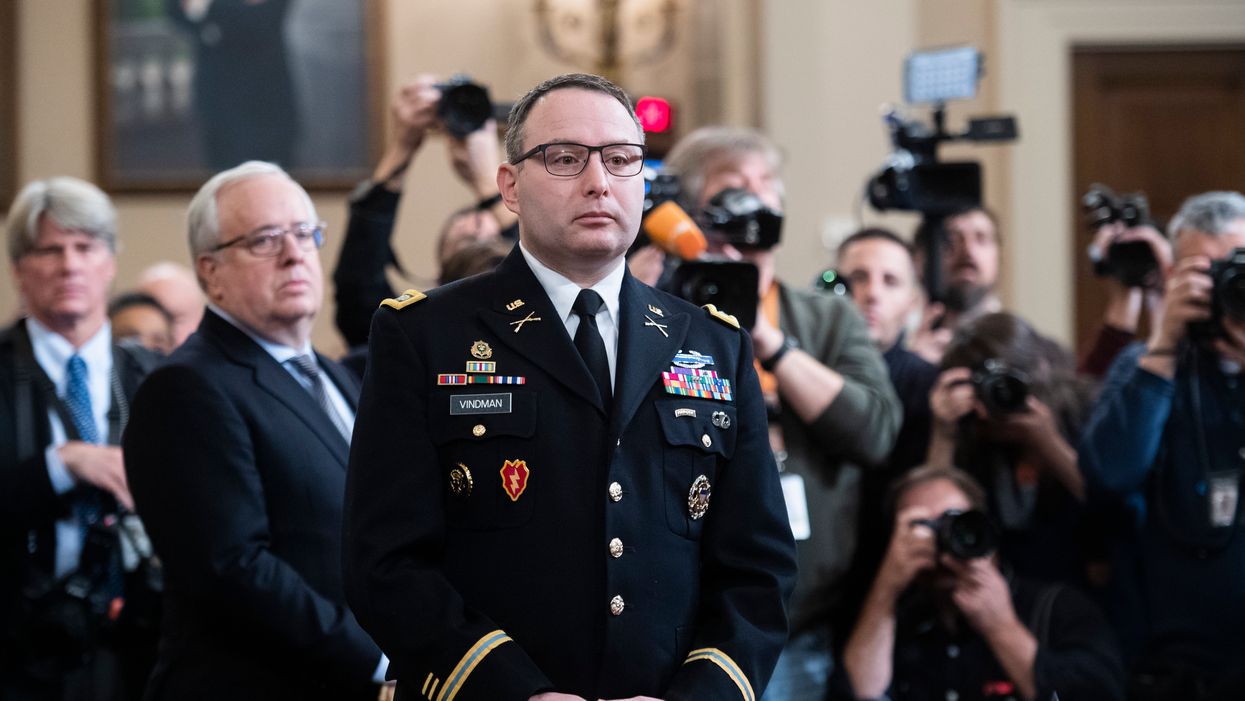 Vindman
said that his future in the military would “forever be limited” due to political retaliation by Trump and his allies, according to his attorney, David Pressman.

Vindman — a Purple Heart recipient — served in the armed forces for 21 years and is an expert on Ukraine, his birth country.

Pressman added that Vindman has endured a “campaign of bullying, intimidation, and retaliation” since
testifying against the president in 2019. He said that Trump has led the effort against Vindman since the impeachment trial.

Trump
fired the military officer from the National Security Council after Vindman testified about his purported knowledge of a 2019 phone call between Trump and the Ukrainian president.

During explosive November testimony, Vindman said that Trump’s insistence on the Ukraine investigating former vice president and presidential candidate Joe Biden was inappropriate and he knew “without hesitation” that he should report the knowledge to superiors in order to hold the president accountable.

Since delivering the testimony and losing his position at the NSC, Vindman has said that Trump and his allies have reportedly attempted to blackball Vindman, including blocking a promotion to colonel.

Vindman, who was bound for the National War College as his next assignment, said that he opted to retire rather than be forced underneath a glass ceiling because of his role in the president’s impeachment trial.

In a statement to CNN, Pressman said, “The President of the United States attempted to force LTC Vindman to choose: between adhering to the law or pleasing the president. Between honoring his oath or protecting his career. Between protecting his promotion or the promotion of his fellow soldiers.”

“These are choices that no one in the United States should confront, especially one who has dedicated his life to serving it,” he added. “[Vindman] did what the law compelled him to do, and for that, he was bullied by the president and his proxies.”

You can read more about his testimony here.

On Wednesday, Vindman tweeted, “Today I officially requested retirment from the US Army, an organization I love. My family and I look forward to the next chapter of our lives.”

Today I officially requested retirement from the US Army, an organization I love. My family and I look forward to t… https://t.co/jMX5Q8T65E

“Based on not just his service, but his twin brother’s service at the NSC, both of whom were pushed out of their assignments early, I think they certainly deserve a promotion based on what I saw,” Bolton said. “They shouldn’t be discriminated against. I hope there’s nobody in the White House who’s holding this up or putting bureaucratic obstacles in the way. I think this is something, this kind of corruption of this promotion process, unfortunately, typical of a number of things that have happened in the administration, [and] I think it’s a bad signal to all of our military.”