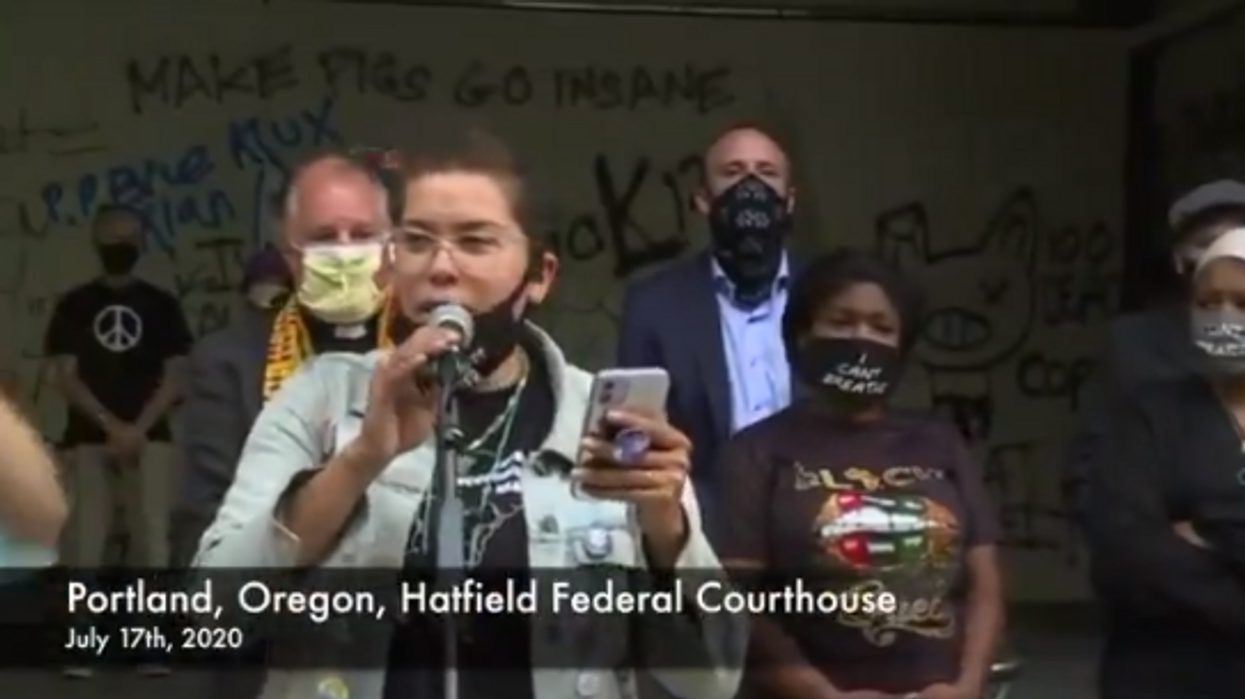 There was a rally outside the Mark O. Hatfield Courthouse on Friday, which marked the 50th day of protests in Portland. One of the speakers at the event was Lilith Sinclair, a self-described “afro-indigenous non-binary local organizer.” During her speech, she called for the abolition of the United States as we know it.”

Sinclair also said that Portland was “stolen land,” and instructed the crowd to carry out a “land acknowledgment.”

Sinclair labels herself as a “Black and Indigenous queer, non-binary femme sex worker.” She also identifies as “AFAB,” which stands for “assigned female at birth.”

In an interview published last month, Sinclair talked about a “global uprising.”

“I think it’s apt that we are looking at a global uprising against oppressive structures during the month where we celebrate the anniversary of another uprising—another movement to not just ask for but to demand our rights,” Sinclair said.

Following the rally, the tensions flared. People were walking the streets with katanas. Rioters launched fireworks and set off smoke bombs near the Portland Police Bureau.

Antifa swarms the PPB to set off multiple fireworks and smoke bombs.

Vandals attempted to use fencing to barricade the Justice Center and the Internal Revenue Service building. Rioters threw projectiles, such as glass bottles, rocks, and broken pieces of metal from fencing, at Portland police officers.

Antifa has gathered much of the fencing previously cordoning off the park to barricade the Justice… https://t.co/Ly7nPeUE1a

Antifa descends like jackals on the Portland IRS building to barricade the enterance with fencing.… https://t.co/ufvMbVdapy

Antifa punched street preacher in the face and they carry him away after he collapses in the street. https://t.co/z5rJQNnIxj

Portland has been in headlines this weekend, following videos of law enforcement officers taking away protesters during demonstrations. The mysterious officers are reportedly U.S. Marshals Special Operations Group and Customs and Border Protection’s BORTAC. They were deployed to Portland since at least July 14 in an effort to protect federal property.

“This is appalling,” Brown said. “When we need help from the federal government, testing supplies, personal protective equipment, they are missing in action.”

On Monday, President Donald Trump commended the federal officers for their work in Portland.

“Portland was totally out of control, and they went in, and I guess we have many people right now in jail and we very much quelled it, and if it starts again, we’ll quell it again very easily,” Trump said. “It’s not hard to do, if you know what you’re doing.”