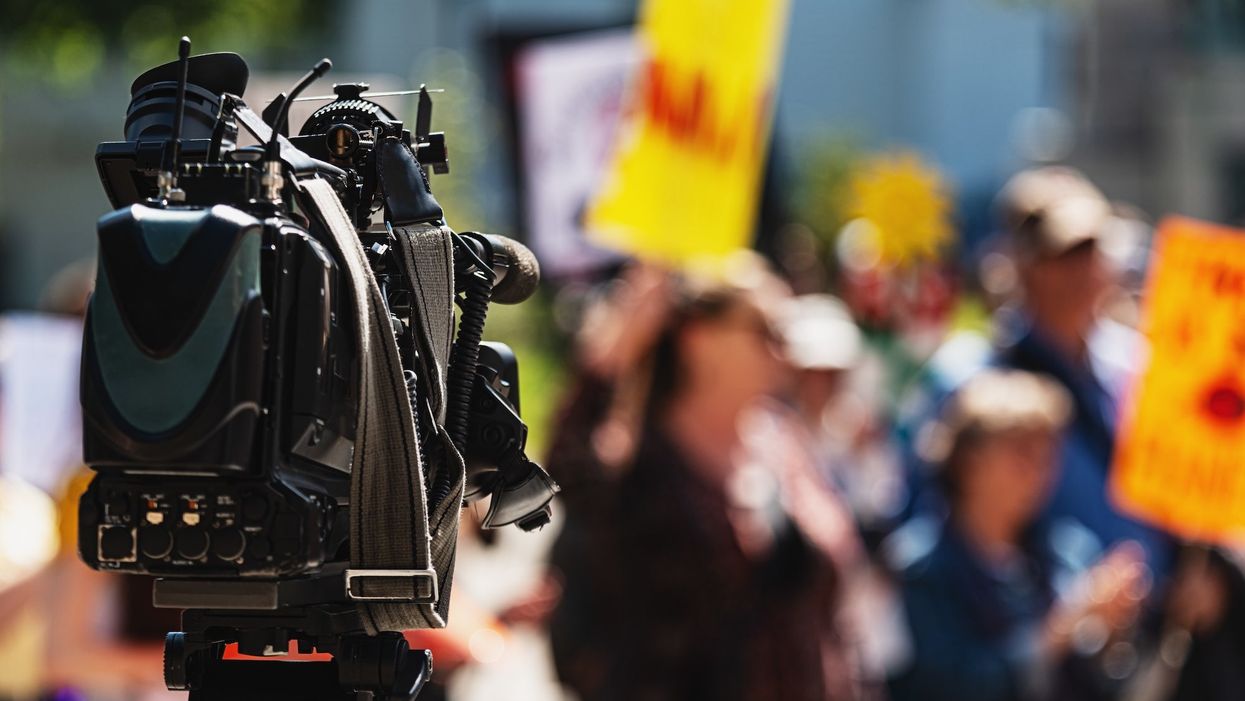 The distrust the American people have for the national media to provide fair and accurate reporting is continuing unabated, Gallup
revealed this week.

And it is not just Republicans — who have long had problems with the the nation’s TV and newspaper outlets — keeping the media’s numbers low. Independents have trust issues with the media — as do a fair share of the country’s Democrats.

A new Gallup poll published Wednesday reveals that a majority of Americans do not trust the mass media to tell the full story.

According to Gallup, only 40% of U.S. adults admit to having “a great deal” or “a fair amount” of trust and confidence in the media to report the news “fully, accurately, and fairly.” And 60% of adults say they have “not very much” trust or “none at all.”

Four in 10 U.S. adults say they have “a great deal” or “a fair amount” of trust and confidence in the media, while… https://t.co/5NBZvHfUAn

Broken down by political affiliation, the data is not encouraging for the media.

But the news is not good among independents, either. Just over one-third (36%) of voters who identify as independent said they trust the media. 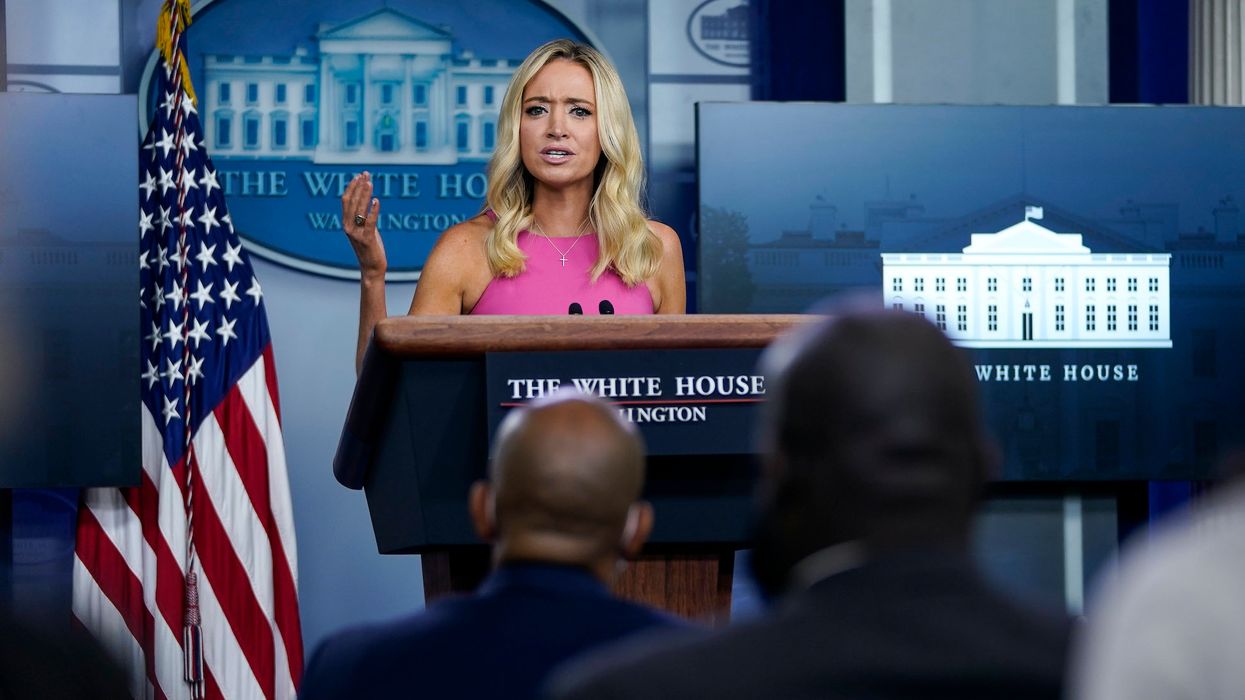 In the wake of President Donald Trump holding another outdoor campaign rally where many attendees did not wear face masks, the media wanted to know why the White House believes such rallies are OK when states have said they are not allowed.

White House press secretary Kayleigh McEnany used the left’s own “peaceful protests” canard to clearly explain that the president was not doing anything his political opponents were not already doing.

President Trump has been holding — and has scheduled several more — outdoor campaign events with thousands of attendees. On multiple occasions, large portions of the audience have been seen not social distancing and often not wearing masks. This, of course, has been a source of ire and criticism from members of the media who are positioning themselves as people who are very concerned that the campaign is allowing such seemingly reckless behavior.

For example, after Trump’s Aug. 27 RNC speech at the White House, CNN repeatedly characterized the convention session as a “possible super-spreader event.”

And following President Trump’s campaign rally in Winston-Salem, North Carolina, Tuesday, the media were aghast that the president would hold an event with so many people who might be putting their health at risk in a state where public gatherings are supposed to be capped at 50 people.

During the White House press briefing Wednesday afternoon, a reporter demanded to know why the president insisted on holding outdoor rallies with thousands of attendees when governors have declared a ban on such gatherings.

“Why did the president have thousands of people, many not wearing masks, at a rally last night in a state that has limited outdoor gatherings to 50 people? Why is he going to Nevada this weekend to hold similar outdoor rallies?” the reporter asked, noting that the events are “in violation of his administration’s own guidance and of the best advice and guidance of local officials who he has said should have final say in these matters”

McEnany was ready for the question and made it clear the president believes that if the rally sauce is good for the liberal “peaceful protest” goose then it is good for the GOP campaign gander.

“People have a First Amendment right, if they so choose, to show up and express their political opinion in the form of a peaceful protest, which is what the president held,” she explained.

Then she called out the media’s double standard when it comes to their treatment of BLM protests versus Trump rallies.

“There’s a real double standard here, CNN had on a guest, apparently a doctor, Rob Davidson, who said, ‘Now, true, there are social distancing issues’ with regard to the protests we’ve seen around the country, ‘however, this is a public health crisis — they are marching against systemic racism,'” McEnany revealed, citing an interview Davison gave Anderson Cooper on Aug. 28.

“So if you’re allowed to march in aggregate in those protests, you are also allowed to show up at a political rally,” she concluded. “You have a First Amendment right in this country.”

Reporter: Why does the president have thousands of people at rallies? 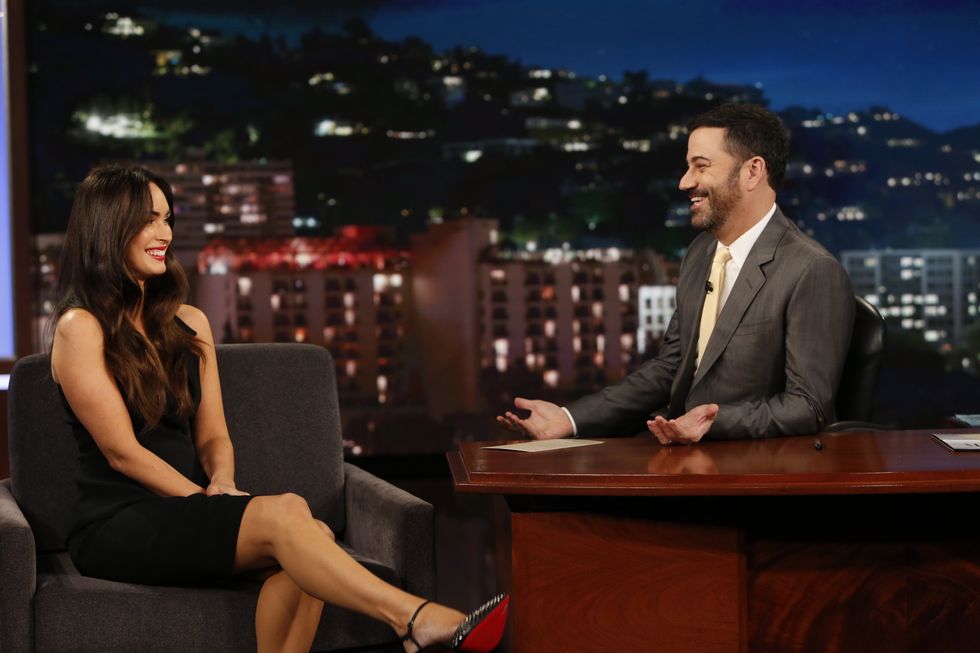 During the interview, which resurfaced this week amid Kimmel’s announcement that he was taking the summer off from his late-night show, Fox recalled working with Bay in “Bad Boys II.”

“They were shooting this club scene, and they brought me in, and I was wearing a stars-and-stripes bikini and a red cowboy hat and, like, six-inch heels. And he [Michael] approved it,” she recalled during the 11-year-old interview. “They said, ‘You know, Michael, she’s 15, so you can’t sit her at the bar and she can’t have a drink in her hand.”

“So his solution to that problem was to then have me dancing underneath the waterfall getting soaking wet,” she said during the interview with Kimmel. “At 15, I was in 10th grade. So that’s sort of a microcosm of how Bay’s mind works.”

Kimmel laughed, adding, “That’s really a microcosm of how all our minds work. Some of us have the decency to repress those thoughts and pretend that they don’t exist.”

Fans across social media demanded an apology from Hollywood on Fox’s behalf, and expressed their outrage that Kimmel would trivialize such an incident.

On Monday, Fox, 34, made an announcement on Instagram insisting that some details of her experience with Bay were “lost in the retelling of the events.”

“I know that a discussion has erupted online surrounding some of my experiences in Hollywood and the subsequent mishandling of this information by the media and society in general,” she wrote. “While I greatly appreciate the outpouring of support, I do feel I need to clarify some of the details as they have been lost in the retelling of the events and cast a sinister shadow that doesn’t really, in my opinion, belong. At least not where it’s currently being projected.”

She continued, “I was around 15 or 16 years old when I was an extra in Bad Boys II. There are multiple interviews where I shared the anecdote of being chosen for the scene and the conversations that took place surrounding it. It’s important to note, however, that when I auditioned for Transformers I was 19 or 20.”

“I did ‘work’ (me pretending to know how to hold a wrench) on one of Michael’s Ferrari’s [sic] during one of the audition scenes,” she admitted. “It was at the Platinum Dunes studio parking lot, there were several other crew members and employees present and I was at no point undressed or anything similar.”

She added that she was not underage for “this particular audition story,” and was not forced to wash someone’s cars in a sense that was “extraneous from the material in the actual script.”

“I hope that whatever opinions are formed around these episodes will at least be seeded in the facts of the events,” she continued.

Fox went on to thank her fans and supporters, saying that these particular instances are not the ones with which the public should take issue.

“There are many names that deserve to be going viral in cancel culture right now, but they are safely stored in the fragmented recesses of my heart,” she wrote. “[W]hen it comes to my direct experiences with Michael, and Steven [Spielberg] for that matter, I was never assaulted or preyed upon in what I felt was a sexual manner.”

Fox’s post has received more than 275,000 likes at the time of this writing. 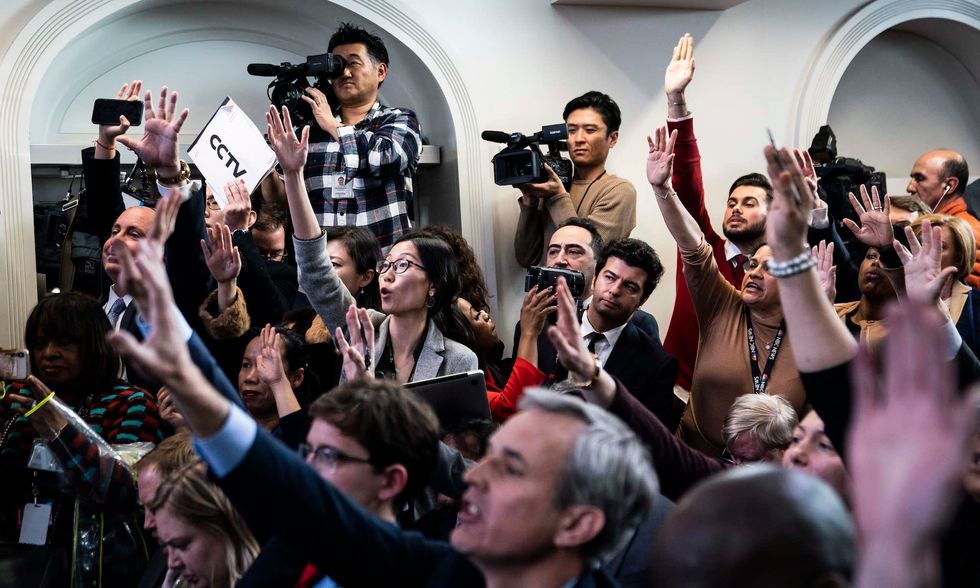 The American public relies on journalists to provide accurate information, but a new poll shows that most Americans are not confident that reporters act in the best interests of the public.

Even worse, even more of us believe journalists do not have high ethical standards. It’s so bad, that Americans rank them behind lawyers (though they did beat out elected officials).

A new Pew Research poll found that only 48% of U.S. adults have a great deal (9%) or a fair amount (39%) of confidence that journalists act in the best interests of the public they serve. That’s down 7 points from 2018, the last time the question was asked. 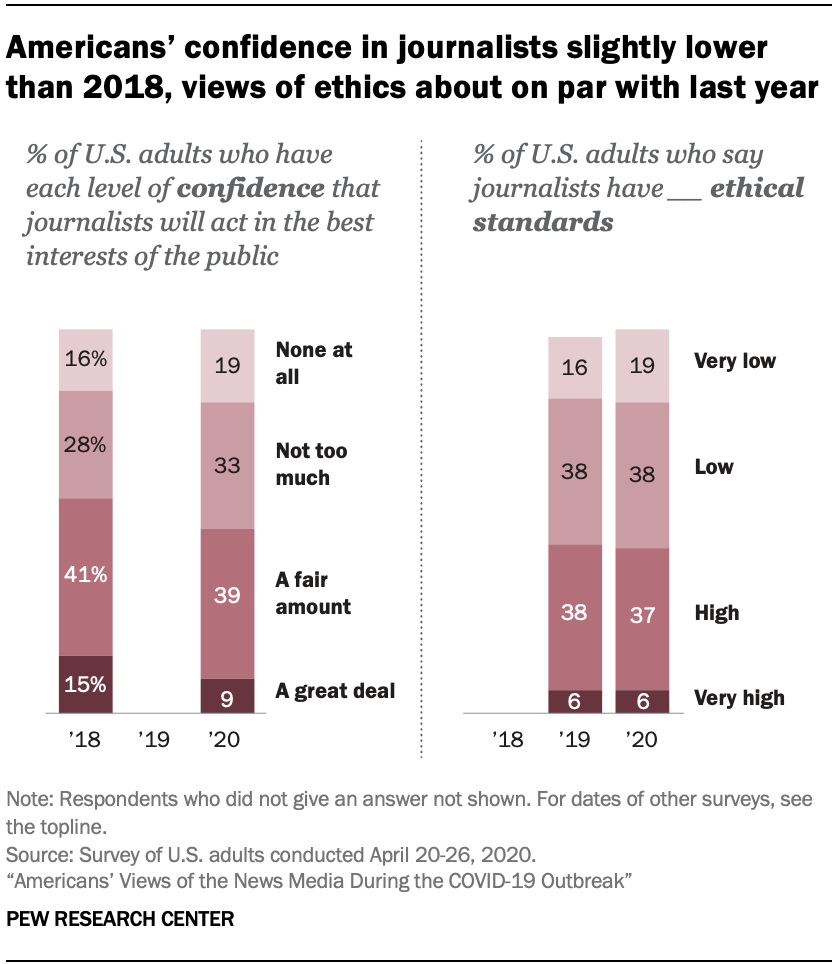 Not surprisingly, there’s a definite partisan gap in the polling.

While 70% of Democrats have at least a fair amount of confidence that reporters act in the best interests of the public, only 23% of Republicans say the same. 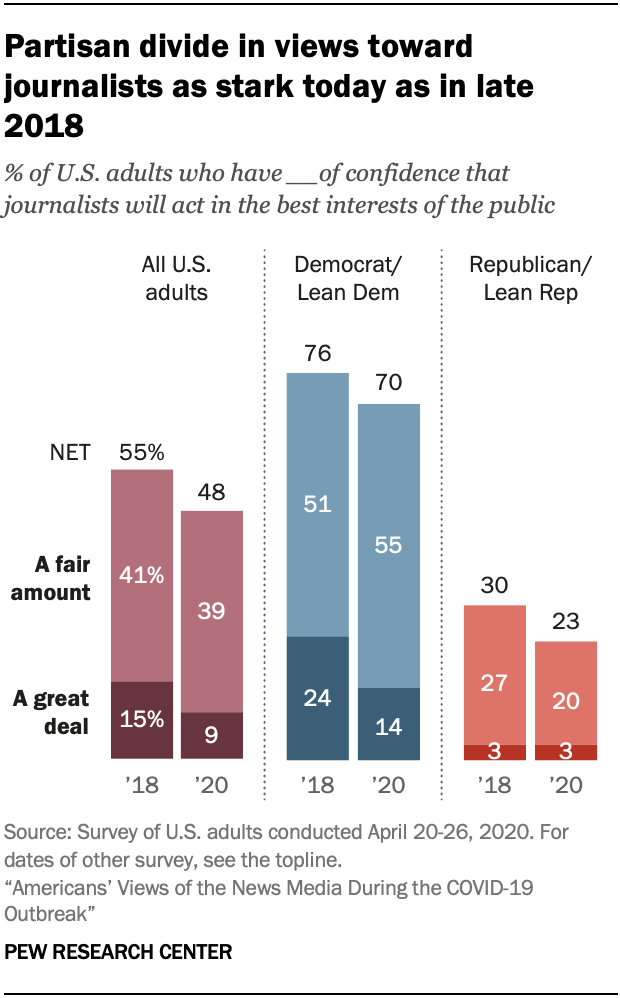 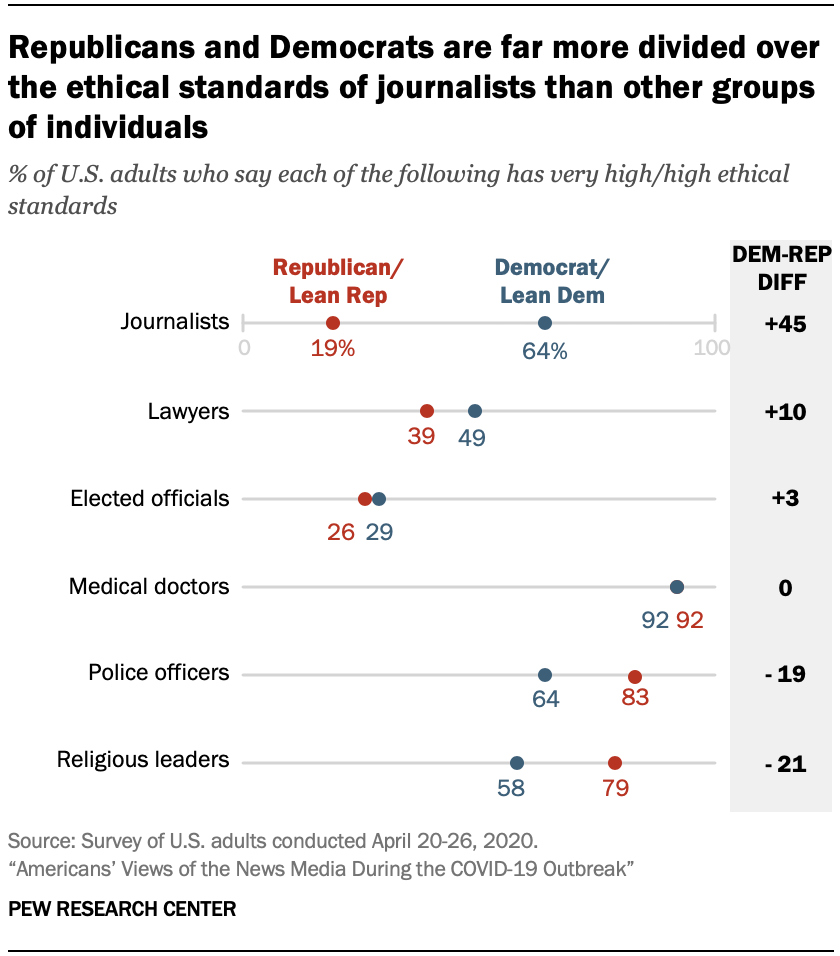 They ranked behind lawyers?

Pew asked Americans about the perceived ethical standards of other professions, and journalists did not fare well in comparison. Beating them out were medical doctors, police officers, religious leaders, and lawyers.

But journalists weren’t the lowest-ranked on the ethical standards ranking.

Elected officials trailed them by 16 points at 27%. 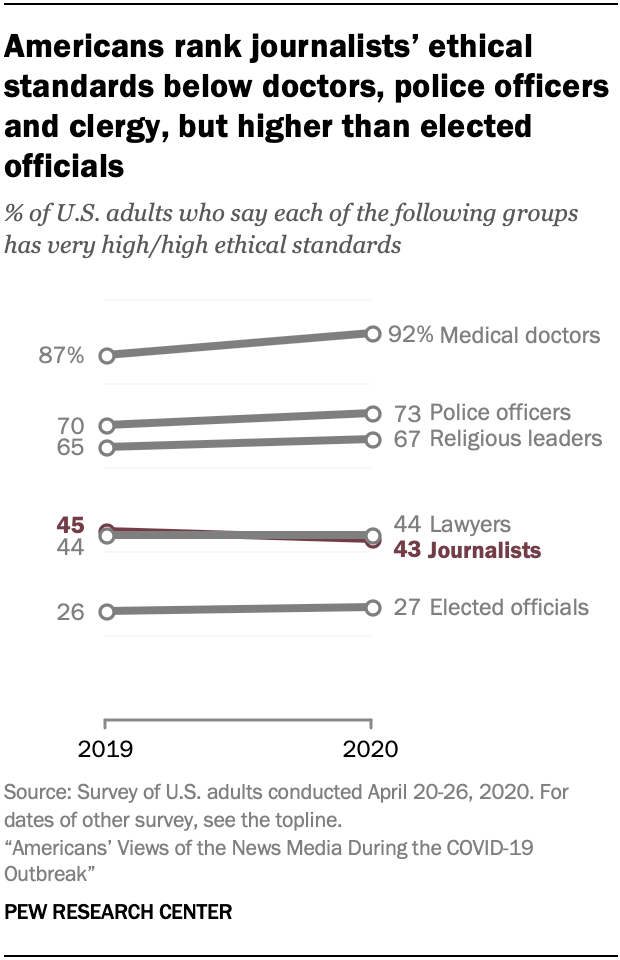 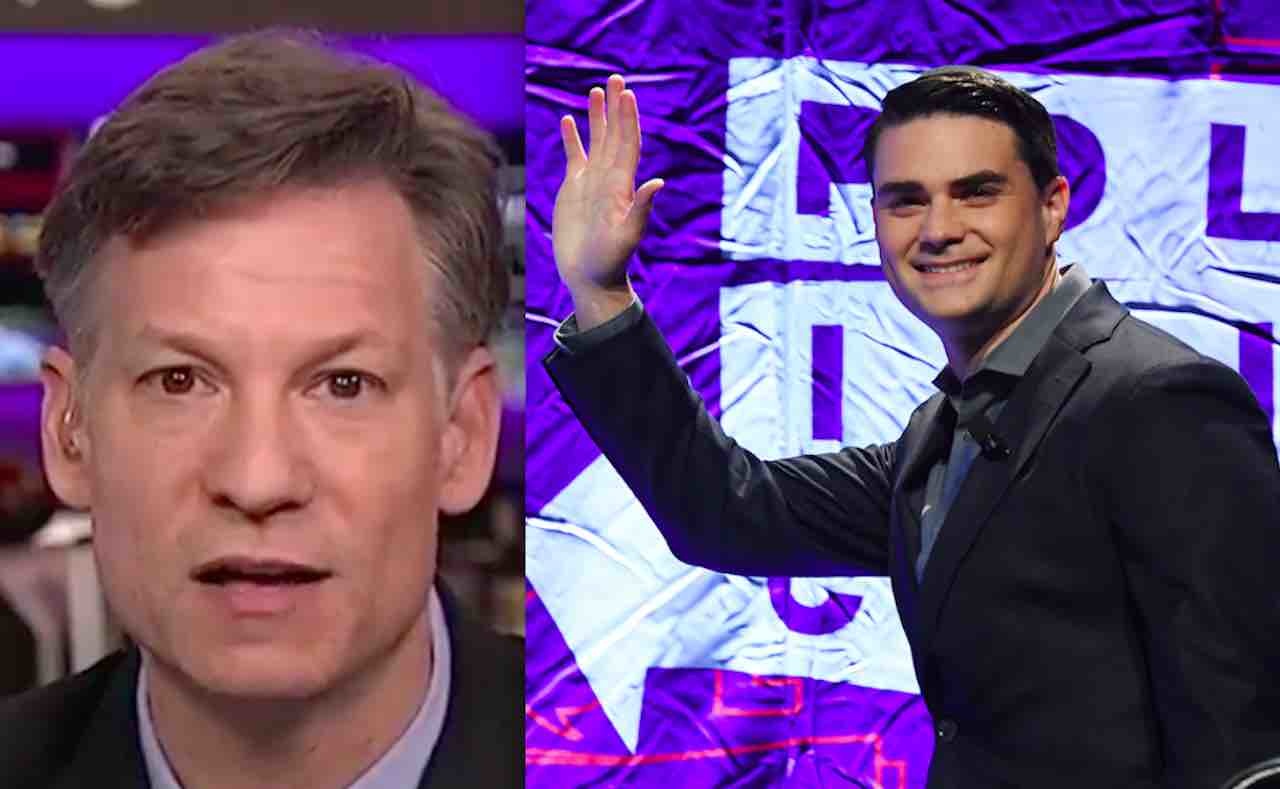 NBC News’ chief foreign correspondent Richard Engel on Wednesday criticized those targeting China over the spread of the coronavirus.

“It’s easy to scapegoat people, and that is what has always happened when pandemics or epidemics … foreigners are attacked, foreigners [are] sometimes physically attacked,” Engel said on MSNBC. “If you look at what happened during the Middle Ages, there was lots and lots of scapegoating against an ethnic group or a religious group whenever there were pandemics that affected the society and frightened a lot of people. And China certainly feels that is what is happening now with people calling it the ‘Wuhan flu’ or the ‘Wuhan virus’ or the ‘China virus.'”

President Donald Trump has been ripped by reporters for calling the coronavirus a “Chinese virus” — but as we’ve already seen, national TV journalists had been doing that very thing since the outbreak was first covered. In fact, in the following video mashup, Engel’s peeps on NBC properties, CNBC and MSNBC, refer to the coronavirus using such language twice each:

But let us not quibble. Continuing with Engel’s defense of China, he added for the cameras that “this is a virus that came from the territory of China but came from bats. This is a bat virus, not a China virus. It doesn’t speak Chinese. It doesn’t target Chinese people. It targets human beings who happen to touch their eyes, nose, or mouth.”

Ben Shapiro has Engel for lunch

Once Engel’s clip hit Twitter, the Daily Wire’s editor in chief Ben Shapiro hit back hard with a brutal take.

“You have got to be f***ing kidding me,” Shapiro wrote, redacting his own F-bomb. “The Chinese government destroyed evidence of the virus, allowed free travel of 5 million people from the Wuhan region, and censored doctors who talked about it.”

Others ripped Engel as well:

Oh, and Engel already has let his feelings about Trump be known

Last August, Engel appeared on “Real Time with Bill Maher” during which he agreed with the host’s strident desire for a recession in order to get Trump out of office.

“Short-term pain might be better than long-term destruction of the Constitution,” Engel said.