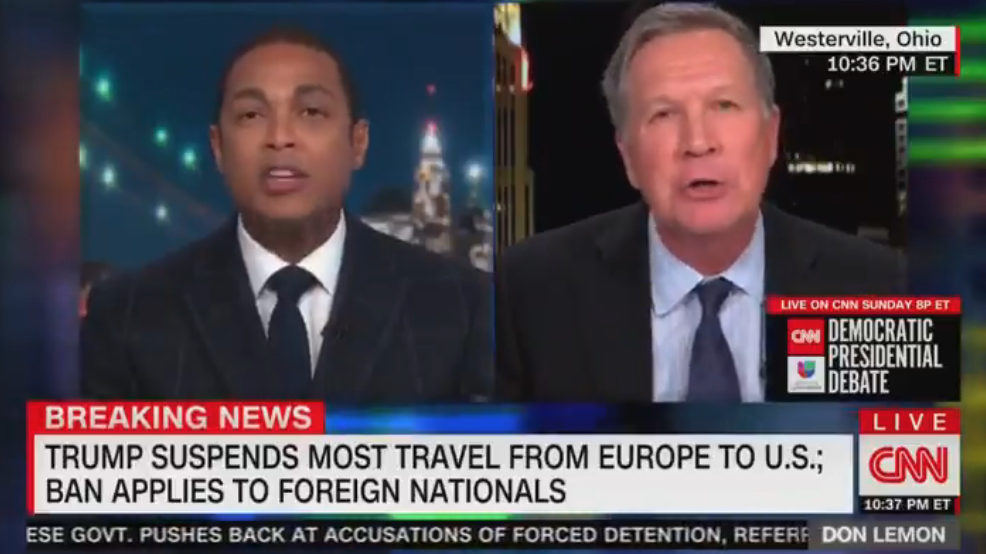 In the address, Trump took his most serious stance yet against the growing pandemic, announcing several measures to combat the outbreak in the U.S., including a forthcoming 30-day ban on travel from Europe to the United States. After the speech, clarifications were made regarding the continued transport of goods and countries and people exempted from the ban.

From the outset of the interview, Lemon was obviously looking to pile onto the president for the confusion that occurred after the address and was also clearly expecting Kasich to oblige. When the former governor didn’t, Lemon lost it.

“We need straight, accurate information from this president and this administration, and we’re not getting it. And I don’t understand why you are tiptoeing around it!” Lemon shouted. “[Trump] came out, gave an address that — that happens very rarely — and he doesn’t get it right?”

“Can I finish now? Let me talk, let me talk. Oh, I can’t talk?!” Kasich exclaimed as he tried to respond, but Lemon kept cutting him off.

Kasich continued to stand his ground, saying he thought the president’s address was “fine” and that issuing clarifications after a major speech such as this one is not “unusual.”

“Now the fact that they clarify, it isn’t unusual in a speech for somebody to clarify something. OK? But I don’t think that the tone he showed tonight takes away from some clarification. I think he set a serious tone. That’s what I wanted out of him for a long time, and I think we got it.”

Kasich also continually tried to move the conversation forward, but to no avail, as Lemon repeatedly shook his head in disagreement and mocked his perspective.

Finally, Kasich shifted the focus onto Lemon and asked, “What is it in the clarification that you though was so terrible?” But Lemon replied yet again by hysterically airing his grievances about the president.

The conversation later ended with Kasich suggesting the two might have to simply agree to disagree.