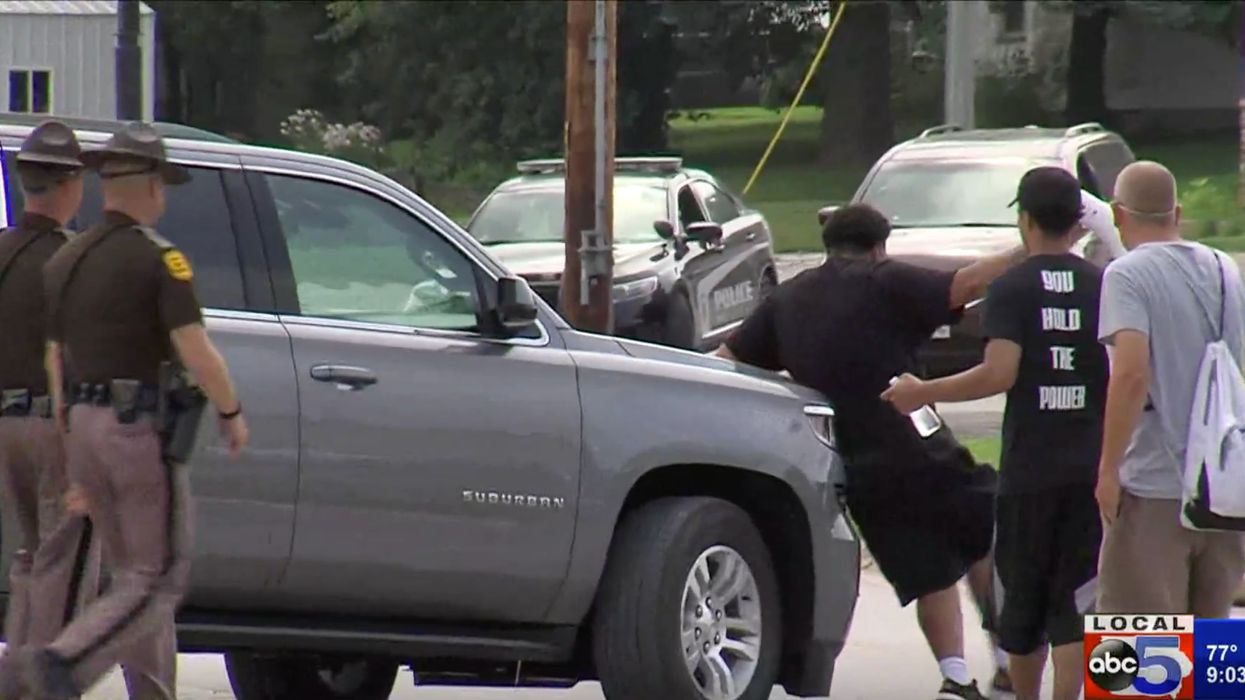 Iowa Gov. Kim Reynolds (R)
said that the state trooper who was driving her from a state event last week was justified in bumping a Black Lives Matter protester with a vehicle.

The protester, Jaylen Cavil, was blocking the driveway of the business Reynolds and her driver were leaving when the trooper tapped him to move him out of the way. Cavil was unhurt in the incident.

Video footage of the incident shows the protester stepping into the path of the vehicle and stopping just as Reynolds’ SUV taps him.

In a Tuesday news conference, Reynolds addressed the incident.

“I do feel like the driver acted appropriately,” she told reporters at the conference in Urbandale, Iowa.

“As we were leaving the vicinity, the individual sped up and stepped in front of the vehicle intentionally, and you cannot block traffic as we’re leaving an event.”

Reynolds added that Cavil was in the wrong and had “acted inappropriately” in apparently trying to block her from leaving the business.

Cavil himself admitted that he was attempting to prevent Reynolds’ vehicle from leaving. He explained, however, that Reynolds is mischaracterizing the incident and says that he didn’t speed up and step in front of the vehicle.

“It’s not like I went out of my way to jump in front of the vehicle in the way that she explains it or the State Patrol explains it,” he insisted. “I was already standing where the vehicle was driving to.”

Cavil complained that the governor is being given preferential treatment.

“Folks in the state of Iowa should really be concerned about the sheer lack of accountability that we’re seeing and the exceptionalism that we’re giving to Gov. Reynolds,” he said. “Because if it was me or anyone else who was driving a car or riding in a car that struck another person, that car can’t just drive away and everything be fine.”

A spokesperson for the Iowa State Patrol said that the department’s investigation found that Cavil intentionally blocked the vehicle, placing himself in front of it, to stop Reynolds from leaving.

“The trooper was operating the vehicle in a safe and prudent manner and in accordance with dignitary protection training,” the spokesperson said. “The trooper driving the vehicle will not be disciplined as he did not violate departmental policies or procedures.”

Cavil and other protesters have been demanding Reynolds sign an executive order restoring voting rights to convicted felons.

Reynolds has
said that she intends to sign the order “by the late summer or early fall,” according to the Des Moines Register.

“The fact that she was riding in a car that struck me and she hasn’t reached out or had anyone from her office reach out just to even have a conversation with me is also pretty troubling and concerning and disheartening, honestly,” Cavill added.