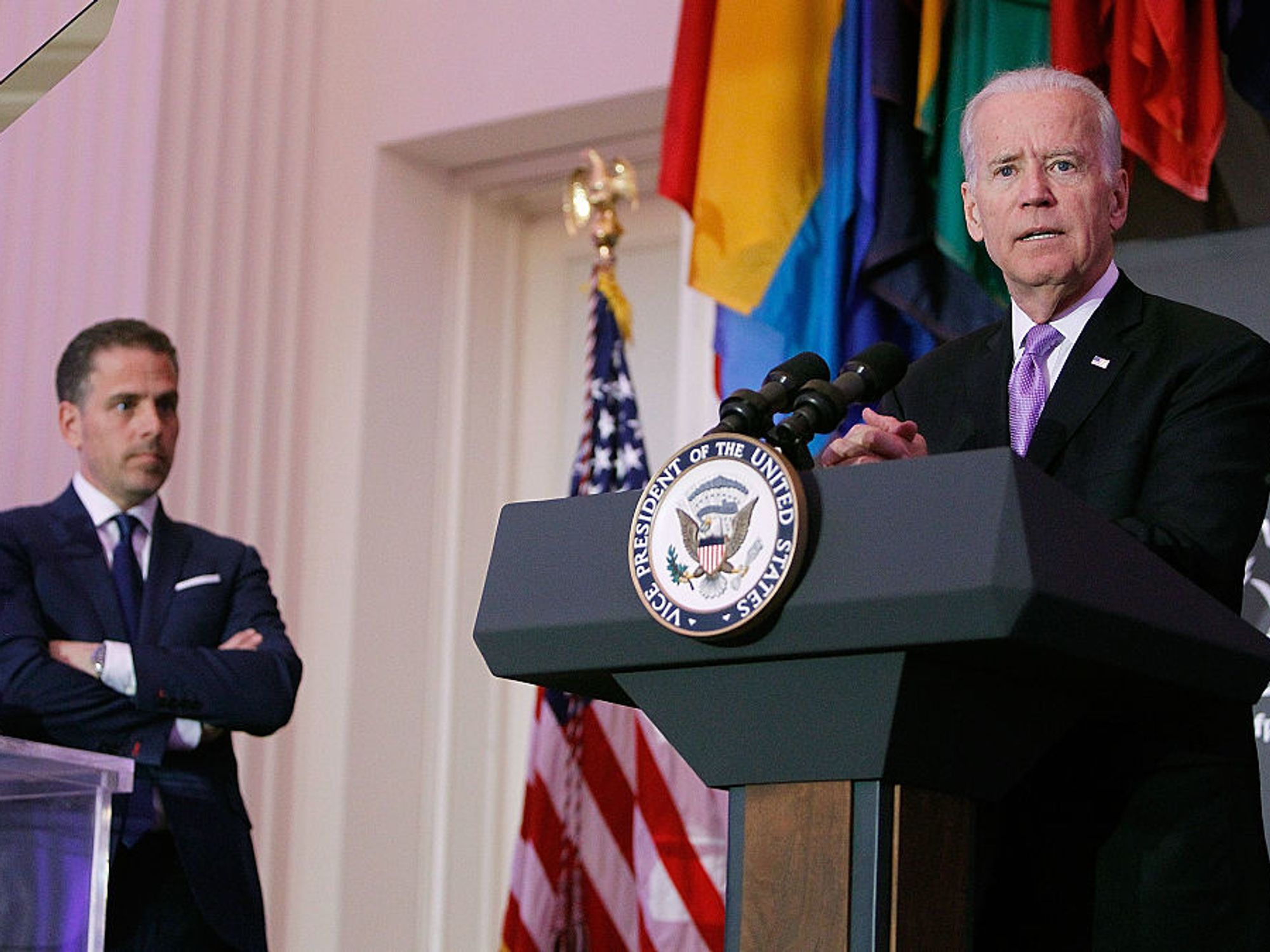 Hunter Biden’s former business partner claims that he warned another associate not to mention “Joe being involved” in their overseas dealings. Another alleged unearthed document from one of Hunter’s business associates told the chairman of a Chinese energy company that he looks forward to touting “the political and strategic value of the Biden family.”

Gilliar reportedly sent text messages to Bobulinski on May 20, 2017.

“Don’t mention Joe being involved, it’s only when u are face to face, I know u know that but they are paranoid,” Gilliar allegedly wrote. Emmanuel clarified the “they” in the message by saying, “I’m told is a reference to Joe Biden.”

On the same day, business associate Rob Walker allegedly informed Bobulinski about Hunter referring to Joe Biden as his “Chairman.”

Bobulinski told Fox News, “Hunter Biden called his dad ‘the Big Guy’ or ‘my Chairman,’ and frequently referenced asking him for his sign-off or advice on various potential deals that we were discussing.”

Joe Biden, the Democratic nominee, has repeatedly denied that he has involved himself in his son’s business affairs.

On May 2, 2017, Bobulinski sent a text to James Biden, Joe’s brother, that read, “Great to meet u and spend some time together, please thank Joe for his time, was great to talk thx Tony b,” according to Fox News.

May 19, 2017, Hunter Biden makes reference to “my Chairman gave an emphatic no” — a source familiar tells #FoxNews… https://t.co/SUSTNHbQty

On April 6, 2017, Hunter Biden was reportedly asked what the Chinese are interested in, and he replies, “Everything – the only thing I told them I would not do is defense related technology and and arms and anything that would give the Chinese a military advantage.”

#FoxNews – April 6, 2017 text message Hunter Biden is asked what the Chinese are interested in, and Hunter responds… https://t.co/fAdcHBcOyB

Mollie Hemingway, senior editor at The Federalist, posted a photo of the alleged conversation.

“U need to stress to H[unter], does he want to be the reason or factor that blows up his dad’s campaign,” Gilliar reportedly told Bobulinski, referencing Joe Biden’s 2020 presidential campaign plans.

“U need to stress to H[unter], does he want to be the reason or factor that blows up his dad’s campaign,” James Gil… https://t.co/ja5ps2vWBo

Another alleged screenshot from Bobulinski’s smashed up BlackBerry shows a text message conversation between Hunter Biden and Bobulinski.

“And TONY that is what Zhang implied – they are both coming to be MY partner to be partners with the Bidens,” Hunter allegedly texted. “He has implied that the #1 has made that clear and available to him.”

Bobulinski replied, “And HUNTER I think u r missing the point that I am outlining.”

Gilliar responds, “Think we are all on the same page,” along with an “OK” hand emoji.

Hunter Biden text message obtained by #FoxNews from May 17, 2017 when he says to his partners the Chinese are comin… https://t.co/grjAZ87Sdv

The “Zhang” mentioned in the text message could be Tian Zhang, who was mentioned in a report released last month by Sen. Ron Johnson (R-Wis.) and Sen. Chuck Grassley (R-Iowa) titled, “Hunter Biden, Burisma, and Corruption: The Impact on U.S. Government Policy and Related Concerns.”

“On the same day that the impending Rosneft deal was announced, Hunter Biden and Gongwen Dong, a Chinese national who has reportedly executed transactions for limited liability companies controlled by Ye Jianming, applied to a bank and opened a line of credit under the business name Hudson West III LLC (Hudson West III).”

Hudson West III was incorporated on April 19, 2016, more than a year before the credit cards were issued. Hudson West III, which is now dissolved, changed ownership at some unknown point. After that change, ownership was divided between Hunter Biden’s law firm, Owasco PC (50%) and Coldharbour Capital LLC (50%). Although ownership in Coldharbour Capital is equally divided between two individuals, Mervyn Yan and Tian Zhang, it has a business address identified as the address of Gongwen Dong. According to records on file with the Committees, Hudson West III checking accounts were opened on Aug. 3, 2017, and Sept. 6, 2017, with Yan and Robert Hunter Biden. Gongwen Dong was a former signer, which suggests that at one time he was associated with Hudson.”

Gongwen Dong’s name also resurfaced on Thursday, after an alleged email was exposed. The Federalist co-founder Sean Davis shared an image of a purported email that was sent to Bobulinski. Gongwen Dong was copied on the reported email that discusses an interest-free $5 million loan from Shanghai-based conglomerate CEFC China Energy Co.

“This $5 MM loan to BD family is interest-free. But if the $5 MM is used up, should CEFC keep lending more to the family? If CEFC lends more, they need to know the interest rate for the subsequent loan(s),” a CEFC official allegedly wrote to Bobulinski on Aug. 1, 2017.

Less than two weeks later, on August 8, 2017, $5 million was wired from a CEFC-affiliated investment vehicle to a D… https://t.co/ujsWoZi0XA

On Aug. 8, 2017, CEFC Infrastructure Investment wired $5 million to the bank account for Hudson West III. These funds may have originated from a loan issued from the account of a company called Northern International Capital Holdings, a Hong Kong-based investment company identified at one time as a ‘substantial shareholder’ in CEFC International Limited along with Ye. It is unclear whether Hunter Biden was half-owner of Hudson West III at that time. However, starting on Aug. 8, the same day the $5 million was received, and continuing through Sept. 25, 2018, Hudson West III sent frequent payments to Owasco, Hunter Biden’s firm. These payments, which were described as consulting fees, reached $4,790,375.25 in just over a year.

According to a report from The Daily Caller News Foundation on Thursday, Bobulinski was part of a five-person partnership with Hunter Biden and his uncle, James Biden. They formed a joint venture involving CEFC called “Oneida Holdings.”

Bobulinski reportedly wrote to Ye Jianming, the founder and former chairman of the now-bankrupt CEFC China Energy Company, who mysteriously disappeared in early 2018.

“I look forward to leveraging those relationships along with the political and strategic value of the Biden family, James Gilliar and CEFC to fulfill SinoHawk’s mission,” Bobulinski allegedly wrote to Ye on June 15, 2017.

Bobulinski claimed that he provided a trove of documents to the U.S. Senate committees who are investigating Hunter Biden’s overseas dealings.

On Thursday, Bobulinski confirmed that the report by the New York Post about Hunter Biden’s “lucrative” deal with the Chinese energy firm is “genuine.” He also claimed that the person referenced as the “big guy” who will reportedly get 10% in a business venture in leaked emails from Hunter’s laptop is a reference to Joe Biden.