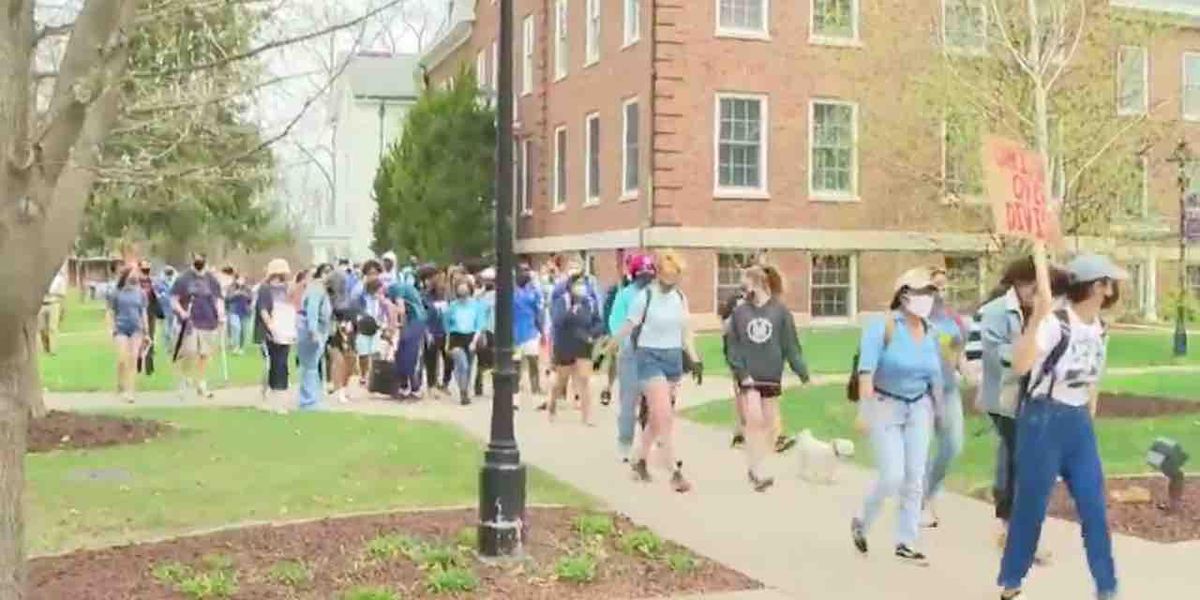 Racist graffiti was found in a dormitory stairwell at Michigan’s Albion College last Friday, and the offensive writing included the phrases “Die [N-word] please!” and “KKK white power” — as well as an anti-Semitic epithet: a Star of David with the numbers “666” written across it.

As a result, the college was in an uproar.

More than 450 students and staff members marched across campus Monday to protest the act and boycott the school, WWMT-TV reported.

“You’re nothing but a coward, you have no room here, you’re not welcomed,” junior Domonic McDonald said presumably to the culprit, according to the station. “I’ll pray for you. You need to be better.”

Senior Jayson Sawyer told WWMT that if Albion’s administration didn’t listen to protesting students, then a group of them would file a civil rights discriminatory lawsuit with the help of Albion College board of trustees members.

On Tuesday, Robert Dunklin — the NAACP’s Albion branch president — condemned the graffiti, MLive reported: “It is not acceptable in this community … Whoever it is, they’re best to come forward or get out of town.”

To top things off, Albion offered a $1,000 reward for information that could identify the source of graffiti, the outlet said.

“The racist and anti-Semitic actions taken on our campus over the last week are cowardly and will not be tolerated,” college President Matthew Johnson said, according to MLive. “We are outraged and angered that this incident occurred within our community. In addition to caring for and protecting the students most directly impacted, and addressing the safety concerns of the broader student body, we are currently investigating who is responsible for racist graffiti on our campus.”

Well, it turns out a black male student was responsible for the racist graffiti, MLive reported in a separate story. Albion police brought in the 21-year-old for questioning Tuesday, and he admitted to creating most of the graffiti, Chief Scott Kipp told the outlet, adding that video evidence from Albion’s Campus Safety Department confirmed the student’s statements.

The student was released after questioning, Kipp said. Once the investigation is complete, the information will be submitted to the Calhoun County Prosecutor’s Office for any charges related to the incident, he said. […]

School officials in the tweets didn’t acknowledge the race of the person who admitted to creating the graffiti — but they insisted transformation is still necessary.

“We know the acts of racism that have occurred this week are not about one particular person or one particular incident. We know that there is a significant history of racial pain and trauma on campus, and we are taking action to repair our community,” one of the tweets read. “We will change and heal together as a community, because we are committed to doing the work.”

Students said in the last month there were at least three instances involving racial and derogatory slurs written on dorm walls, along with drawings of swastikas, WWMT-TV reported in a separate story.

But it didn’t seem to matter to them that a black student was behind the graffiti.

“We are not anti-white, our movement is not anything of that nature, we are anti-ism,” boycott organizer Sawyer, quoted in the previous WWMT story, told the station. “Our goal is to remove hatred, within the Albion community and the marginalized communities as well.”

For the third day this week, Albion College students and staff marched across campus, demanding change over recent… https://t.co/HBEUfSI8W9

And the beat goes on 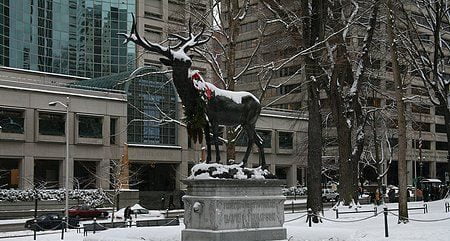 According to the recent media headlines, the way to end racism is to destroy statues. Well, an iconic elk statue has been burned in Portland, Oregon, so does that mean racism is now dead?

Portland protestors were rightly mocked after setting fire to an elk statue. On Wednesday night, protestors lit fires around the downtown landmark, quickly engulfing the elk in flames. Videos show a small inferno wrapped around the base of the landmark with some graffiti. It looks like “ACAB 1312” was sprayed on the statue that somehow advocates police brutality and racism.

As reported by RT, it’s unclear why protesters targeted the statue. It was donated by former mayor David P. Thompson back in 1900 to commemorate the elk herds that once populated the region. However, there was plenty of speculation about what the animal had done to deserve being consumed by flames.

After the mob torched the stature, Twitter users began to mock and theorize that perhaps the animal was a “slave owner” or a “white supremacist.”

The nice & peaceful people of Portland set ablaze an elk statue from 1900.

It has been confirmed this elk fought in Civil War, waving the confederate flag. His name is Sir Bob Elk Badassio Jr. & he was the leader of the evil people.

Justice has been served.
Racism has ended. pic.twitter.com/ki3N6UJYIx

“That elk owned several slaves and was one of the biggest cotton-farm owners around Portland,” joked one Twitter user. Others wondered if perhaps “extinct elk herds” represent the “last bastion of white supremacy” in Oregon. Conservative pundit Ian Miles Cheong jokingly applauded the protesters for finally finding a way to end racism.

The elk statue in Portland is burning. The elk owned slaves. This is how we end racism. Thank you Antifa. pic.twitter.com/fL38OKO5HL

Recently, demonstrators and rioters have targeted statues across the United States as part of the ongoing Black Lives Matters demonstrations, claiming that the landmarks are rooted in oppression.  BLM is funded by major corporations and George Soros.

Protesters first toppled Confederate monuments but soon turned their attention to statues of historical figures such as Christopher Columbus and Thomas Jefferson.  Now, the elk seems to have been some kind of racist, but thank goodness BLM was there to torch it to teach the animal a lesson about racism. 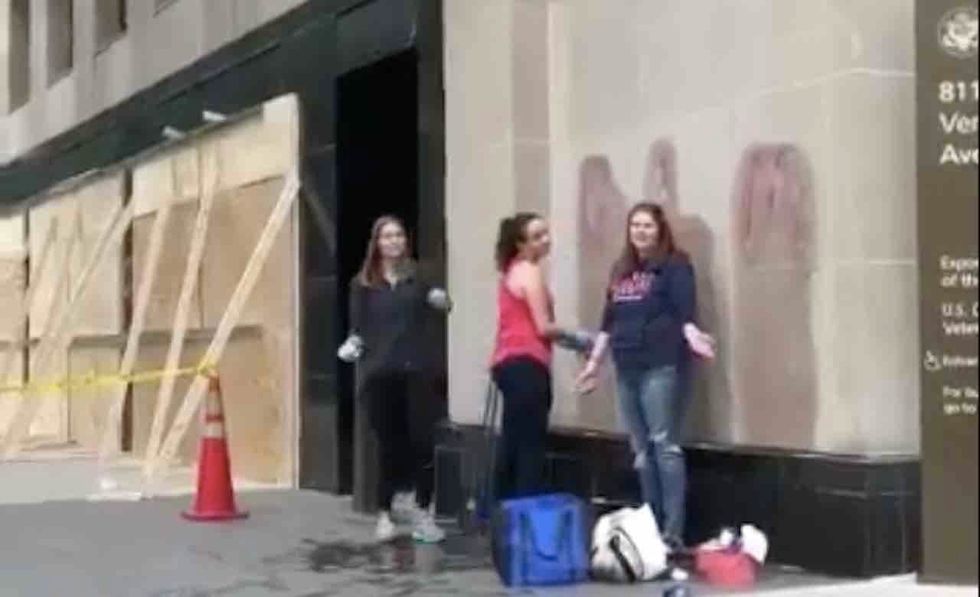 Leftists are becoming far too predictable.

In the wake of rioting in the nation’s capital, a rather astonishing video shows an oh-so-woke Karen having a little talk with a trio of women committing the crime of scrubbing graffiti from a federal building. 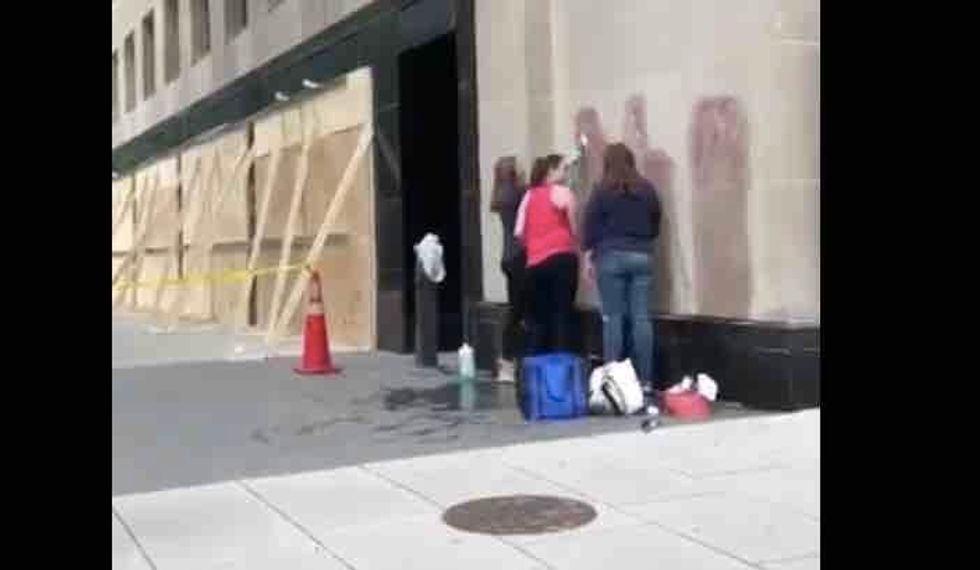 That is to say, the letters read “BLM” — and apparently it was the wrong graffiti to wash off.

“Why are you guys removing Black Lives Matter graffiti?” she asked.

The culprits replied that it’s a federal building and that it was vandalized. In fact, the address is 811 Vermont Ave. NW, which houses the Department of Veterans Affairs.

‘So, you don’t care about black lives then?’

Not that it mattered to Karen — the women were failing her litmus test for righteousness in 2020.

“So, you don’t care about black lives then?” she asked.

The guilty party replied, “That’s not at all what we’re saying” and “we do care about black lives.”

“Not enough to leave up a message,” Ms. Woke shot back.

“We don’t disagree with the message, ma’am, it’s just on the building,” one of the deplorables replied. “We’re just trying to clean it.”

Not getting anywhere with the oppressive wall-scrubbers, our heroine signed off her clip by saying, “Right. Not a great way to use your white privilege, ladies. That’s disgusting.”