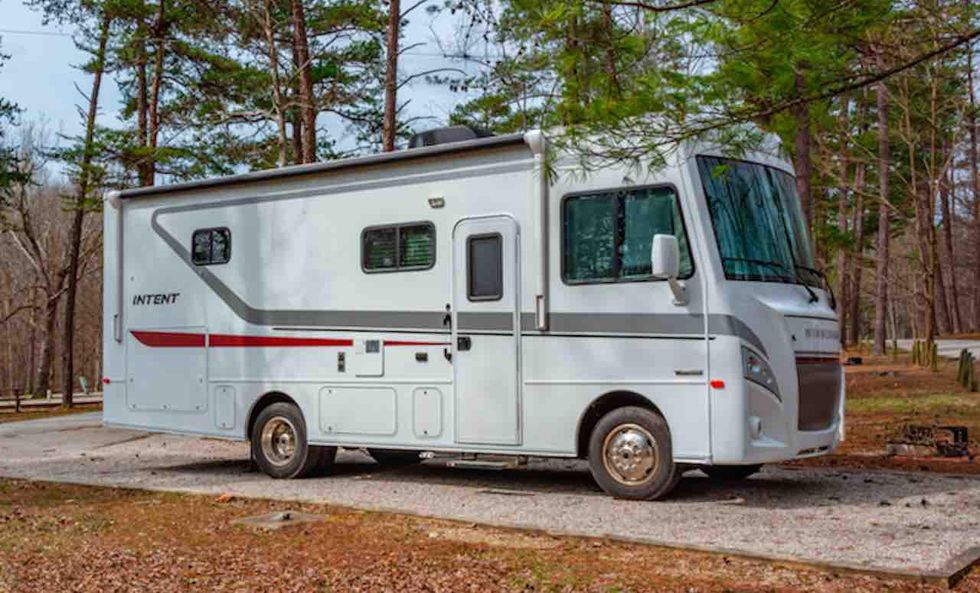 Get your popcorn ready.

With former President Donald Trump out of office, the angry left — denied its favorite target — has been increasingly turning on itself for various transgressions, and now it appears leftists are devouring themselves once again.

It seems an RV park and campground for gay men — which dubs itself Camp Boomerang — is in some hot water for banning transgender males, Pink News reported.

Based in Orleans, Michigan, Camp Boomerang has yet to open, but it’s already starting controversy in the wake of co-owner Bryan Quinn’s announcement about the limited clientele.

“Camp Boomerang is a private, membership-only RV park/campground that allows only ‘guys,'” Quinn wrote on the Facebook, according to Pink News. “A ‘guy’, in terms of this discussion, is defined as a person with a penis, [who] presents himself as male and has a state-issued ID that says ‘male.'”

He added that “we understand this statement, unfortunately, may not make everyone happy, but feel it needs to be clarified,” the outlet said. Quinn also explained that the RV park’s “guys”-only rule “allows us the ability to build a like-minded atmosphere.”

“We don’t mean for this to come off as a ‘like it or leave it’ attitude, but we feel it’s necessary for everyone to know exactly what our vision is for Camp Boomerang,” he also noted, according to Pink News.

According to Advocate, Camp Boomerang “reportedly lost several founding members” over its policy — and then the campground’s Facebook page was taken down amid backlash. Pink News said the RV park got a bunch of one-star reviews on Google.

Some of static was pretty loud, Advocate noted:

“They are blatantly uneducated and arrogant and assuming of what it means to be a trans person,” said Michael Champagne, who had previously put down a deposit for rental space at Camp Boomerang for his newly purchased RV, told Pride Source. “It is hate speech period. It is discrimination period. It’s all of those things that I don’t want to associate with.”

“I think it’s garbage,” he said. “There’s a huge reason many trans individuals feel they don’t belong within the LGBTQ movement. It’s because sexuality and gender identity are completely different. And still, in 2021, many gay, lesbian, and bisexual individuals are transphobic and would never fight for our rights like we have theirs. It’s insane to me to know that even within our own circles we are still ostracized.”

Another individual posted on Facebook that despite being a gay-owned business, Camp Boomerang is being “super transphobic” and that “trans men are men. Trans women are women. No debate. No discussion.” 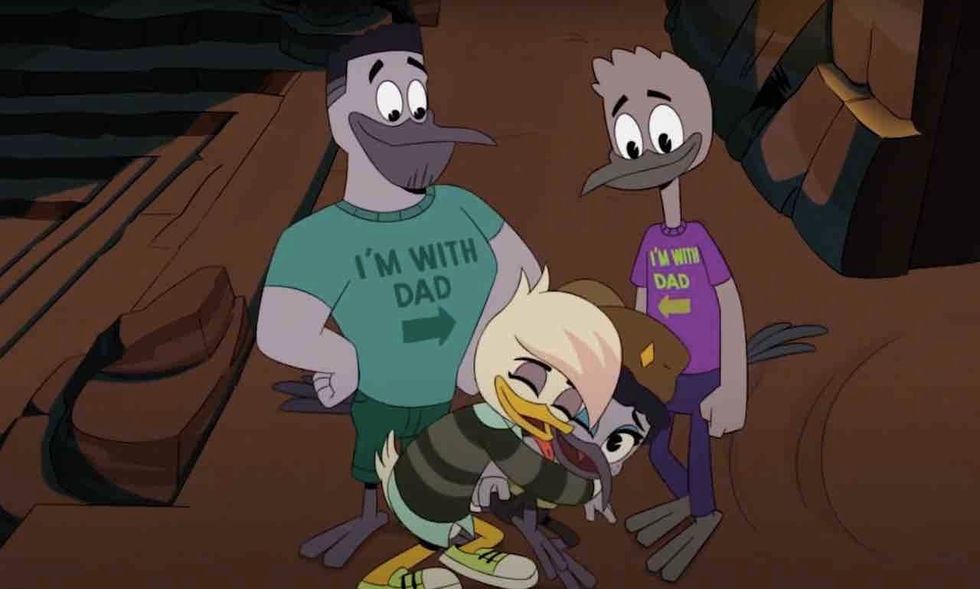 Violet’s dads adopt her friend Lena in the episode, the outlet said, adding that Violet dubs her “my sister from a couple of misters.”

Their names are Tyrian “Ty” Sabrewing and Indigo “Indy” Sabrewing, LGBTQ Nation said. They both wear T-shirts with the phrase “I’M WITH DAD” on the front along with arrows pointing at each other.

What does the show’s co-executive producer have to say?

“DuckTales” co-executive producer and story editor Frank Angones noted that “we had a lot of conversations about who Violet was and what her background was and came up with this fun notion of her too enthusiastic, overly supportive dads who love being dads.”

“I’m well aware that the ‘queer representation through parents and background characters’ trope is an issue, and we’ve sort of stumbled backwards into a lot of heteronormative romances in this show due to legacy characters with pre-existing relationships (Scrooge and Goldie, Donald and Daisy, Fenton and Gandra) and how many specific hoops you have to jump through to make changes to established Disney characters,” Angones said.

“But that’s really no excuse. We’ve done pretty well on racial diversity and representation of people with limb differences, but we really have not done enough relevant LGBTQ+ rep. We do have some themes and ideas coming up that address relevant LGBTQ+ narratives. But there’s always opportunity for a lot more,” he said.

What are observers saying?

There was pointed enthusiasm out there for the new characters:

“Violet has gay dads!!!” one Twitter user wrote, while another called it a “step in the right direction for LGBT representation.”

Although one commenter seemed less than satisfied: “Yup. I’m so glad to be represented by background characters that they can just erase if China so much as raises an eyebrow.” 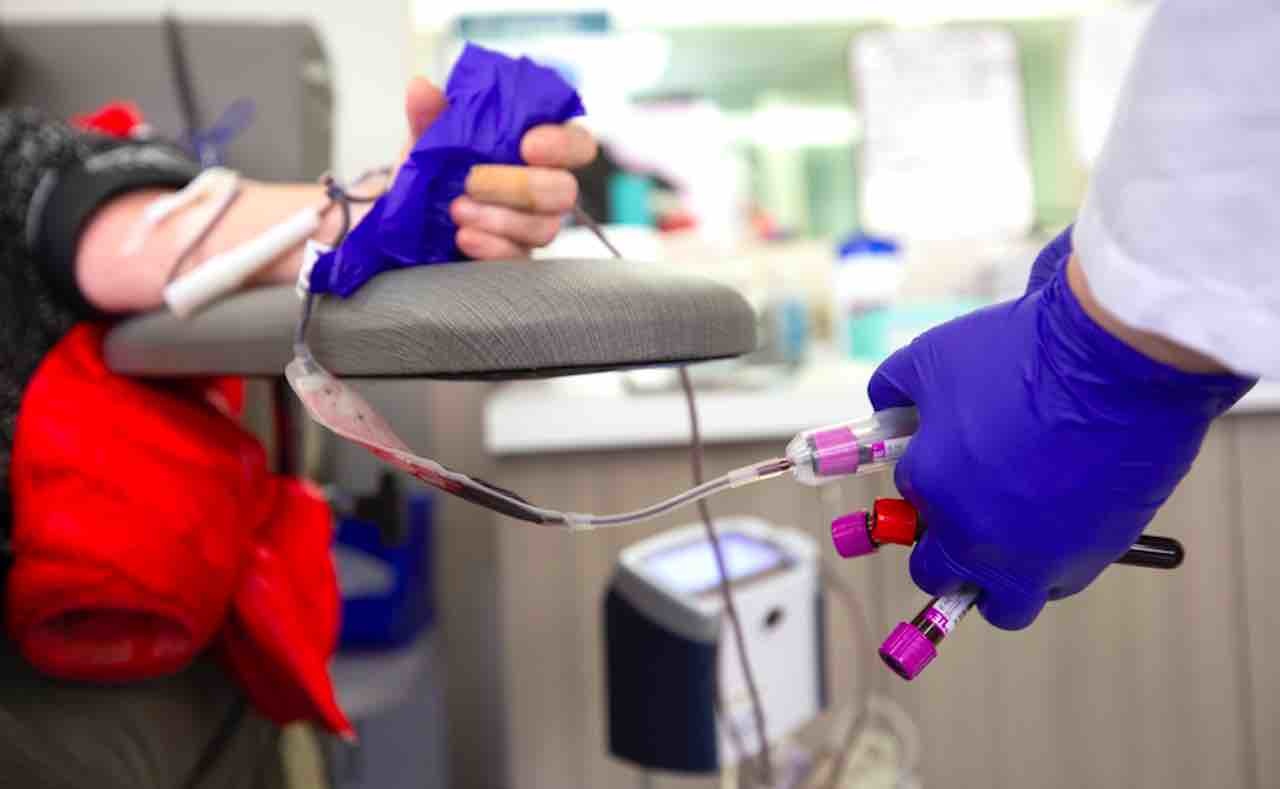 The Food and Drug Administration said Thursday it’s relaxing some restrictions that prevent gay men from donating blood amid a supply shortage brought on by the coronavirus pandemic, ABC News reported.

The FDA’s recommended deferral period for men who’ve had sex with another man is changing from 12 months to three months, the network said.

The American Red Cross said last month nearly 2,700 blood drives — where the organization gets more than 80% of its blood donations — had been canceled due to the pandemic, The Hill reported.

“It is critically important we have rationally and scientifically based blood donation deferral periods,” Adams said on a call with reporters, the network reported. “In particular, we know that reducing the deferral period for men who have sex with men can significantly increase life-saving blood donations, prevent drug shortages, and help reduce harmful stigma experienced by the MSM community.”

“MSM” is an acronym for gay, bisexual, and other men who have sex with men. The Centers for Disease Control indicates this population is “disproportionately impacted by syphilis, HIV, and other sexually transmitted diseases.”

The revised guidelines also allow former sex workers and injection drug users to donate blood after a three-month deferral, Bloomberg Law reported, adding that the latter groups hadn’t been allowed to donate blood at all in the past. The outlet also said people with recent tattoos or piercings can donate blood after three months instead of a year.

“Based on recently completed studies and epidemiologic data, we’ve concluded that the current policies regarding the eligibility of certain donors can be modified without compromising the safety of the blood supply,” Peter Marks, director of the FDA’s Center for Biologics Evaluation and Research, said in a statement, according to ABC News.

The new guidelines will remain throughout the pandemic and will be updated to incorporate public comment within 60 days of the emergency being lifted, The Hill reported.

ABC News said Democratic senators and gay rights advocacy groups in the last week have called on the federal government to loosen the blood-donation restrictions.

How did GLAAD respond?

“LGBTQ Americans can hold their heads up today and know that our voices will always triumph over discrimination,” GLAAD President and CEO Sarah Kate Ellis said in a statement, according to the network. “This is a victory for all of us who raised our collective voices against the discriminatory ban on gay and bisexual men donating blood. The FDA’s decision to lower the deferral period on men who have sex with men from 12 months to 3 months is a step towards being more in line with science, but remains imperfect. We will keep fighting until the deferral period is lifted and gay and bi men, and all LGBTQ people, are treated equal to others.”

Twitter commenters reacting to the loosened restrictions traded barbs about discrimination and safety. A number of them defending the move indicated that donated blood is tested before transfusions. Indeed the CDC says “all blood for transfusion is tested for evidence of certain infectious disease pathogens, such as hepatitis B and C viruses and human immunodeficiency virus (HIV).”

But others aren’t convinced, with one detractor saying “this isn’t a good idea”: 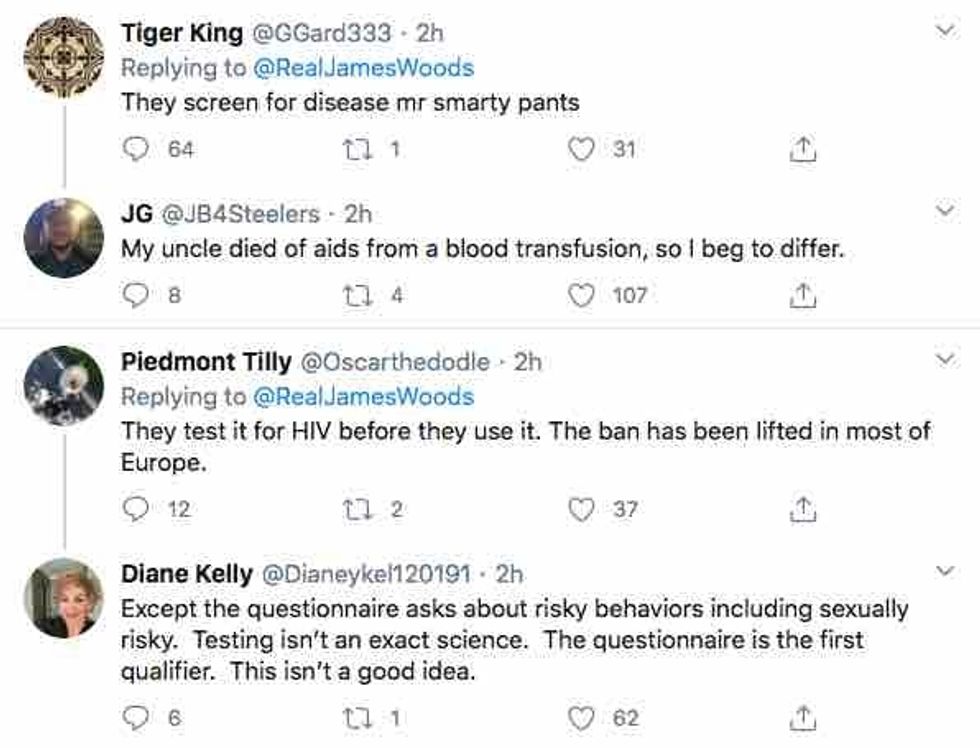