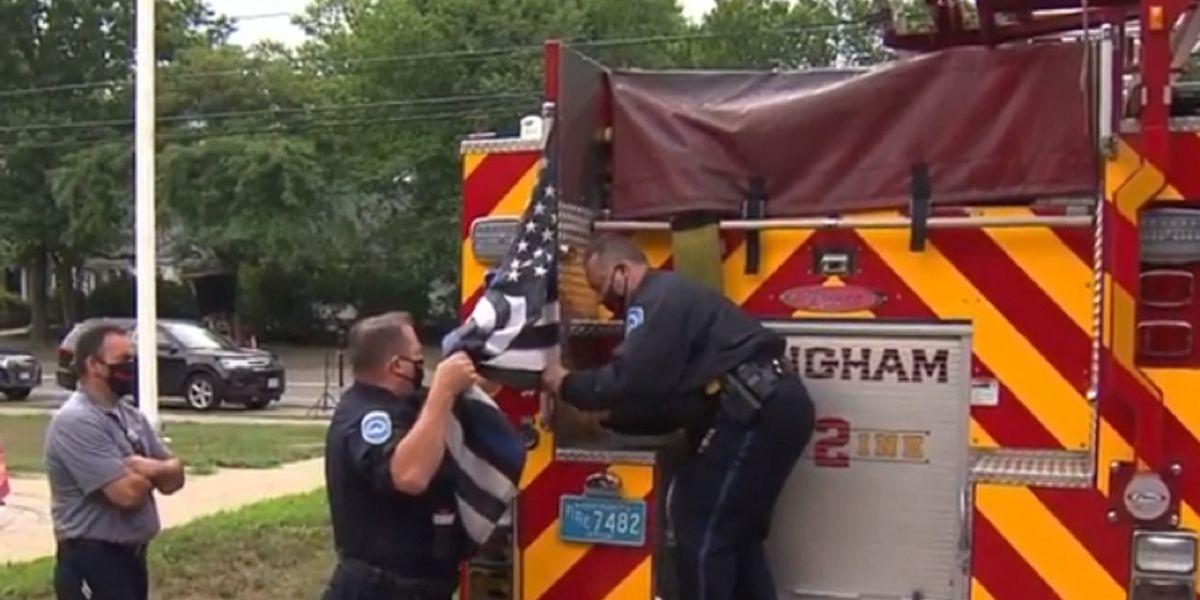 The Hingham Fire Department in Massachusetts flew “Thin Blue Line” flags from its firetrucks this month, to honor the memory of a fallen police officer from a nearby town who was murdered in the line of duty two years ago.

A resident wrote the leaders of the town of Hingham complaining that the flags honoring law enforcement now symbolize “white supremacy” and arguing that they should be taken down. Following resistance, the “Thin Blue Line” flags were removed from the trucks — but the rank and file members of the fire department refused to be the ones to do it.

Weymouth Police Sgt. Michael Chesna—a veteran of the Afghanistan and Iraq wars—was investigating a car accident in July of 2018 when a suspect attacked him with a rock before killing him with his own service weapon. In remembrance of the second anniversary of Chesna’s death, the Hingham Fire Department affixed the “Thin Blue Line” flags on their trucks.

The Patriot Ledger reported that an unnamed Hingham resident reacted by emailing the town’s board of selectmen calling for the flags to be removed, arguing that the flags “have become a symbol of white supremacy” in light of the rise of the Black Lives Matter movement.

According to The Ledger, “Fire Chief Steve Murphy and Police Chief Glenn Olsson told personnel they’d need to remove the flags, which are black-and-white version of the American flag with a single blue line in the center, because they’re against a town policy that forbids political messaging on town property.”

Town leaders emphasized their support for law enforcement, but also acknowledged that under their rule against political displays, they had recently refused to fly LGBT pride flags on city property.

Fox News reported that the firefighters’ union “says it resisted removing the ‘Thin Blue Line’ flags” for days “because no member ‘was able to sacrifice his or her moral fortitude.'”

Union president Lt. Chris Melanson said of the flag earlier this week, “It has always, and will always, represent the men and women of law enforcement that hold the line between peace and chaos. Especially those who bravely made the ultimate sacrifice during the performance of these heroic duties.”

With no firefighters being willing to personally take down the flags, they solicited officers from the Weymouth Police Department who stepped in Thursday morning to assist with the flag removals from the fleet. The union issued a statement afterward saying, “We did not want to risk the chance of having these flags removed from the trucks in a disrespectful manner.” 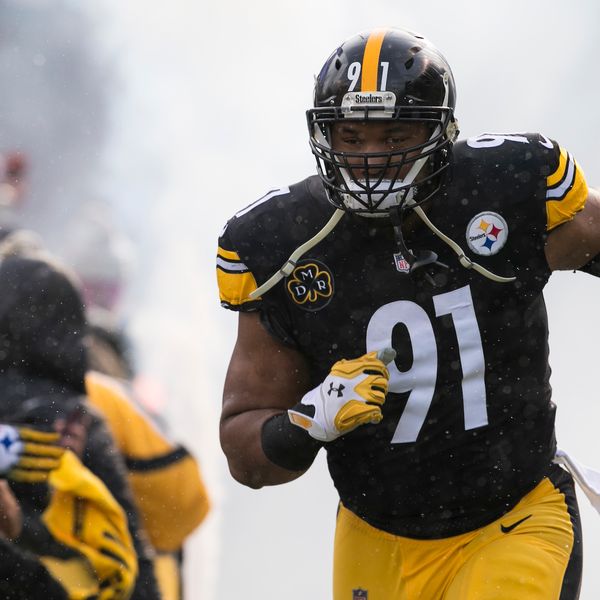 Kneeling for the flag during the national anthem might be all the rage for most NFL players, but do not count Pittsburgh Steelers defensive end Stephon Tuitt among them.

And unlike some NFL stars who initially appeared to take a stand against kneeling and then backpedaled and apologized, he is making no bones about his stance and seems to have no plans to retreat.

In fact, he has a response for those who might have a problem with his refusal to take a knee: screw you.

In a tweet Monday morning, Tuitt had a message for football fans, social justice warriors, teammates, or coaches who are all in on the national anthem kneeling movement: “I’m not kneeling for the flag and screw anybody who have [sic] a problem with that.”

He went on to note how he would not show disrespect to the flag of the country where his family — starting with his grandmother — found a home and prospered. The star lineman added that his family of immigrants came to the United States “the right way.”

Tuitt said his “grandmother was a [sic] immigrant from the Carribbean” who “worked her ass off to bring 20 people over the right way.”

“She had no money and educated herself to be a nurse,” Tuitt wrote, adding that his family matriarch is “living good now.”

Also I’m not kneeling for the flag and screw anybody who have a problem with that. My grandmother was a immigrant f… https://t.co/VMS2l47ZYl

Tuitt’s position stands in stark contrast to some other NFL stars who have been caught up in respect-for-the-flag controversies.

Fellow Steeler Alejandro Villanueva — a U.S. Army Ranger veteran who graduated from West Point and served three tours in Afghanistan — famously stood alone for the national anthem as the rest of his team stood in the tunnel on Sept. 24, 2017. His move was initially seen as a defiant stance against protesting during the anthem and was celebrated by many football fans and conservatives. He later apologized for the move, saying he had made a mistake that “threw his teammates under the bus unintentionally,” and explained that the whole event was a mix-up.

More recently, New Orleans Saints quarterback Drew Brees came under fire for saying he will “never agree with anybody disrespecting the flag of the United States of America.”

“I love and respect my teammates, and I stand right there with them in regard to fighting for racial equality and justice,” Brees told Yahoo Finance in June. “I also stand with my grandfathers, who risked their lives for this country, and countless other military men and women who do it on a daily basis.”

Some of Brees’ teammates were upset over his remarks, including Malcolm Jenkins, who blasted his QB’s statement as “extremely self-centered.” Jenkins further stated, “We’re done talking, Drew. And people who share your sentiments, who express those and push them throughout the world, the airwaves, are the problem”

One day later, Brees was in apology mode: “I would like to apologize to my friends, teammates, the City of New Orleans, the black community, NFL community and anyone I hurt with my comments yesterday. In speaking with some of you, it breaks my heart to know the pain I have caused.”

“I am sick about the way my comments were perceived yesterday, but I take full responsibility and accountability,” he continued. “I recognize that I should do less talking and more listening … and when the black community is talking about their pain, we all need to listen. For that, I am very sorry and I ask your forgiveness.”