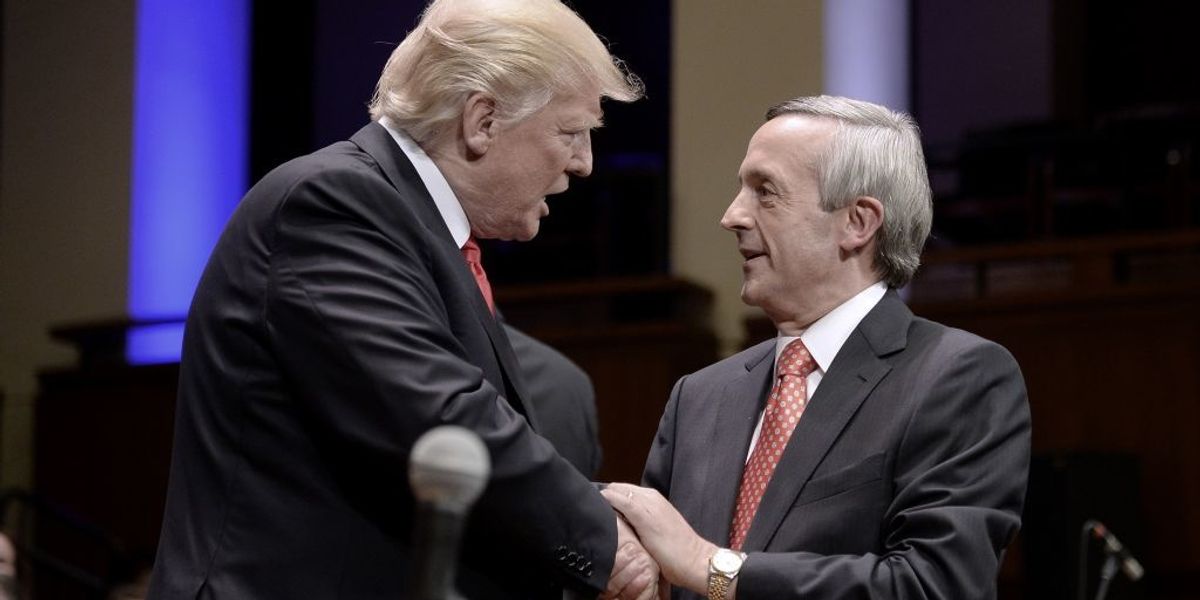 One of President Donald Trump’s most prominent evangelical Christian supporters acknowledged Wednesday that former Vice President Joe Biden appears to be the winner of the 2020 presidential election.

Pastor Robert Jeffress, of the megachurch First Baptist Dallas, told The Dallas Morning News that Biden’s victory seems to be “the most likely outcome,” though he emphasized that he is not in any way calling the election over.

Trump has refused to concede the election to Biden, making allegations of voter fraud and challenging the results of several states in court. Jeffress did not echo Trump’s complaints, insisting that if there is fraud it will come to light eventually.

“I don’t pretend to be an election expert,” he said. “I trust that if there is that kind of fraud that it would be uncovered.”

Jeffress also penned a column for Fox News in which he wrote that Biden’s election would be a “bitter pill to swallow” for conservative Trump supporters and that, while the results aren’t official, “it appears that he won.”

Jeffress’ article is a pastoral exhortation for Christians to trust that God is sovereign no matter who is president and to remember to pray for earthly leaders, event those you disagree with.

“Human governments and rulers change at God’s direction and design. Our faith and our salvation lie not in any human ruler, but in the ruler of rulers, the King of kings. We have to remember that even though the occupant of the White House is changing, the One who occupies the throne of Heaven hasn’t changed,” Jeffress wrote.

“The fact that God has established authorities means that by obeying the government, we obey God.”

Quoting the Apostle Paul from 1 Timothy 2:1-2, Jeffress reminded Christians to pray “for all people, for kings and all who are in high positions.”

Now, it’s always easier to submit and to pray for someone when he was our preferred candidate. But the rubber really meets the road when the person who takes office is not the one we supported. Paul didn’t give us any wiggle room — his command applies all the same, whether the emperor was the faith-friendly Constantine or the evil emperor Nero.

Jeffress is one of Trump’s most vocal and visible Christian supporters, having traveled with the president on the campaign trail in 2016 and served on Trump’s evangelical advisory board. While he supports Trump’s right to challenge the results of the election, he acknowledges that it’s unlikely the Trump campaign’s lawsuits will uncover enough evidence of voter fraud to overturn the election.

“I understand – looking at it, it appears that [Biden] won,” Jeffress told The Dallas Morning News, adding that “I’ve said publicly –I’ve said on Fox News – that I think the only way for us to have unity in our country is not only to respect the right of people to vote in an election, but the right to contest an election and President Trump has every right to contest this election.”

“It’s ‘if he becomes president’ and we won’t know that till I suppose December 14 when the Electoral College meets,” he said.

“I think most people are well intentioned,” Jeffress said. “They want the best for our country. And I think Christians want to hope for the best with the new president, but frankly I think Joe Biden is making the wrong moves up front, if he really does want to work with all Americans. I mean to immediately attack religious liberty issues and protection of the unborn. I just don’t think that’s the kind of thing you do if you truly are interested in working with groups who may not believe like you do.”