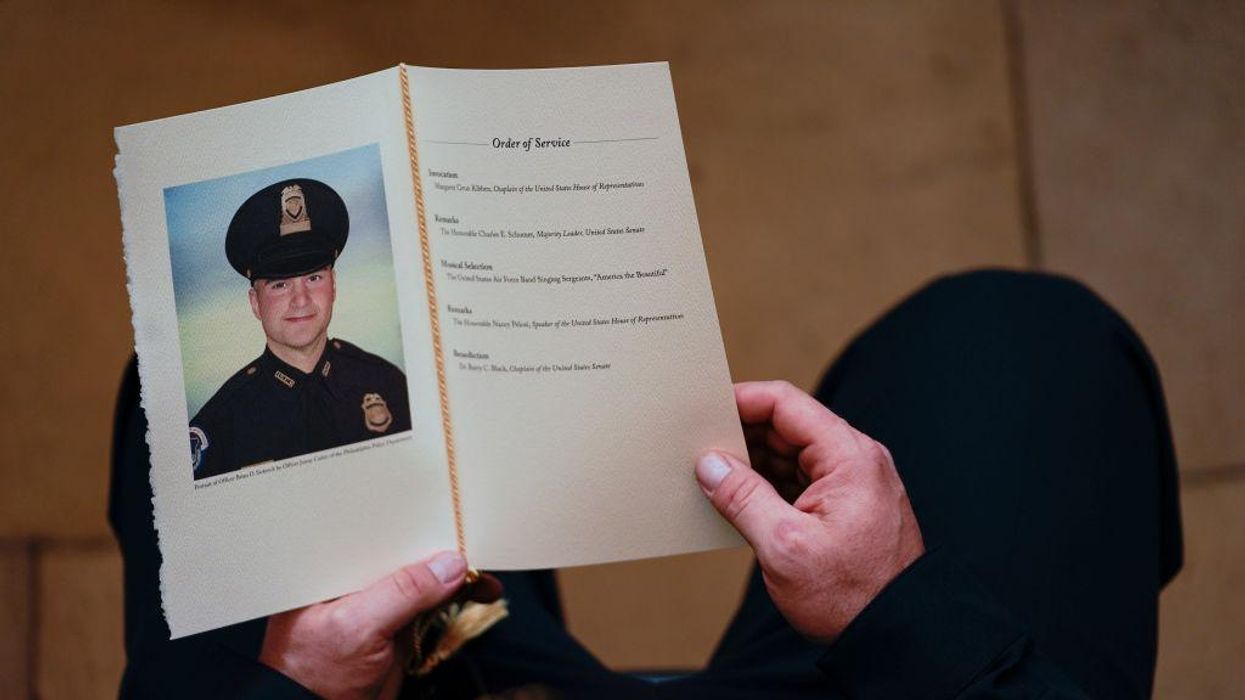 Federal law enforcement authorities have arrested and charged two men with assaulting U.S. Capitol Police officer Brian Sicknick with bear spray during the Jan. 6 riot at the Capitol building, but the cause of his death is still unknown.

Julian Khater, 32, of Pennsylvania and George Tanios, 39, of West Virginia were arrested Sunday and will appear in federal court Monday, the Washington Post reports. The two men were allegedly seen on video recordings taken at the Lower West Terrace of the Capitol at 2:14 p.m., where Sicknick and other police officers were standing guard behind metal bicycle racks.

Arrest papers obtained by the Post allege that Khater asked Tanios for bear spray, which he later appears on video to discharge into the face of Sicknick and two other police officers.

The two men are charged with nine counts including assaulting three officers with a deadly weapon, civil disorder, and obstruction of a congressional proceeding. If convicted, they could each face up to 20 years in prison.

Officer Sicknick was one of five people who died during and after the riot. Kevin Greeson, 55, of Athens, Alabama; Benjamin Philips, 50, of Ringtown, Pennsylvania; and Rosanne Boyland, 34, of Kennesaw, Georgia, died of medical emergencies. Ashli Babbitt, 35, was fatally shot by police during a confrontation inside the Capitol building. Initial reports suggested that Sicknick had died from blunt force trauma after being struck by a fire extinguisher, but later reporting revealed that medical examiners did not find signs that the officer sustained any blunt force trauma.

A spokeswoman for the deputy mayor for public safety in D.C. told the Washington Post that autopsy reports for Sicknick are still pending as of Monday. Police have not determined the cause of Sicknick’s death and have not charged Khater and Tanios with homicide. Police said surveillance video and officer-worn body camera footage show clear evidence of the assault, regardless of whether those actions led to the officer’s death.

The Associated Press reported that investigators theorize Sicknick may have ingested the chemical substance he was sprayed with, possibly contributing to his death at a hospital the next day.

More details from the AP:

Khater is the man in a video obtained by the FBI that showed him spraying Sicknick and others with bear spray, according to court papers.

“Give me that bear (expletive), Khater said to Tanios on the video, according to court papers. Sicknick and other officers were standing guard near metal bike racks, the papers say.

Khater then says, “they just (expletive) sprayed me,” as he’s seen holding a white can with a black top that prosecutors said “appears to be a can of chemical spray.”

After he sprayed the officers, they “immediately retreat from the line, bring their hands to their faces and rush to find water to wash out their eyes,” according to the court papers.

The FBI has released some 250 photos of suspects wanted for assaulting federal law enforcement officers on Jan. 6 at the Capitol. The Department of Justice recently said said more than 300 individuals have been charged relating to the riot, over 900 search warrants have been executed nationwide, and 15,000 hours of surveillance tape is being reviewed by authorities to identify suspects. 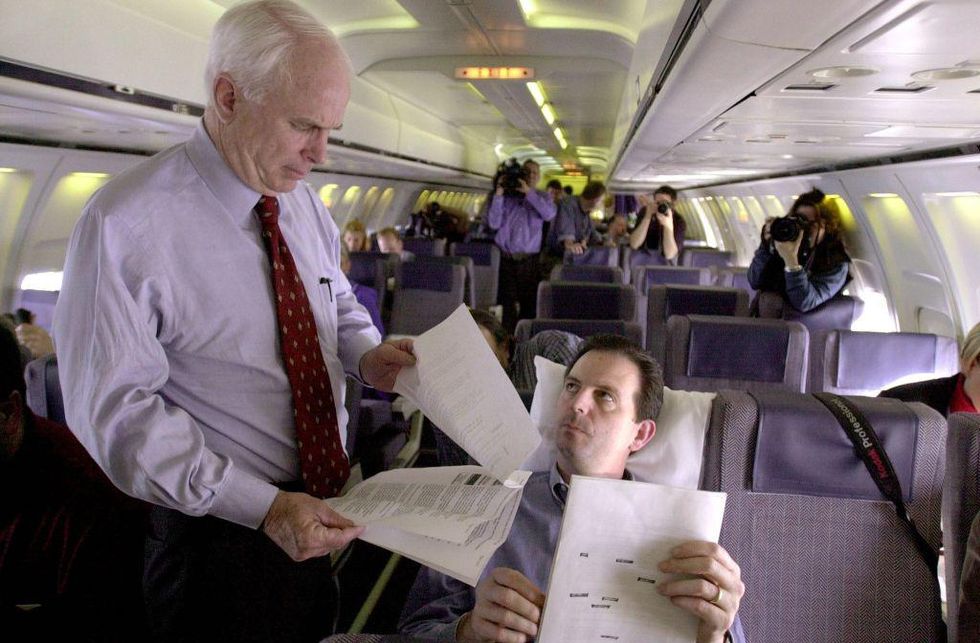 Two individuals who spoke to reporter Yashar Ali said they were contacted by FBI agents who made inquiries regarding whether Weaver ever touched them inappropriately or requested sexually explicit material from them when they were underage.

Ali reported that his sources said the investigators’ questions were “narrow in scope” and that it is not clear how wide the FBI investigation is. He also noted in his newsletter that “the FBI asking potential witnesses about allegations of illegal conduct does not necessarily mean that someone is the subject or a target of a federal investigation.”

Weaver, 61, was formerly a top political adviser to John McCain and John Kasich before going on to found the anti-Trump Lincoln Project. Allegations of sexual misconduct against him were first reported in the American Conservative and later in Forensic News.

At least 21 young men have come forward to accuse Weaver of sexual harassment online, including one 14-year-old boy who claims Weaver asked him about his body. These men accuse Weaver of leveraging his powerful position in politics to manipulate them, promising networking and career favors in exchange for sex.

Weaver, who is married with two children, admitted in January that he had sent “inappropriate” messages to multiple men, apologized for misinterpreting what he says he thought were “consensual mutual conversations,” and announced he is gay.

In a statement he made to the New York Times, Weaver said: “I am so disheartened and sad that I may have brought discomfort to anyone in what I thought at the time were mutually consensual discussions. In living a deeply closeted life, I allowed my pain to cause pain for others. For that I am truly sorry to these men and everyone and for letting so many people down.”

“No Lincoln Project employee, intern, or contractors ever made an allegation of inappropriate communication about John Weaver that would have triggered an investigation by HR or by an outside employment counsel,” Lincoln Project co-founder Steve Schmidt told the Associated Press in a Wednesday interview. “In other words, no human being ever made an allegation about any inappropriate sexualized communications about John Weaver ever.” 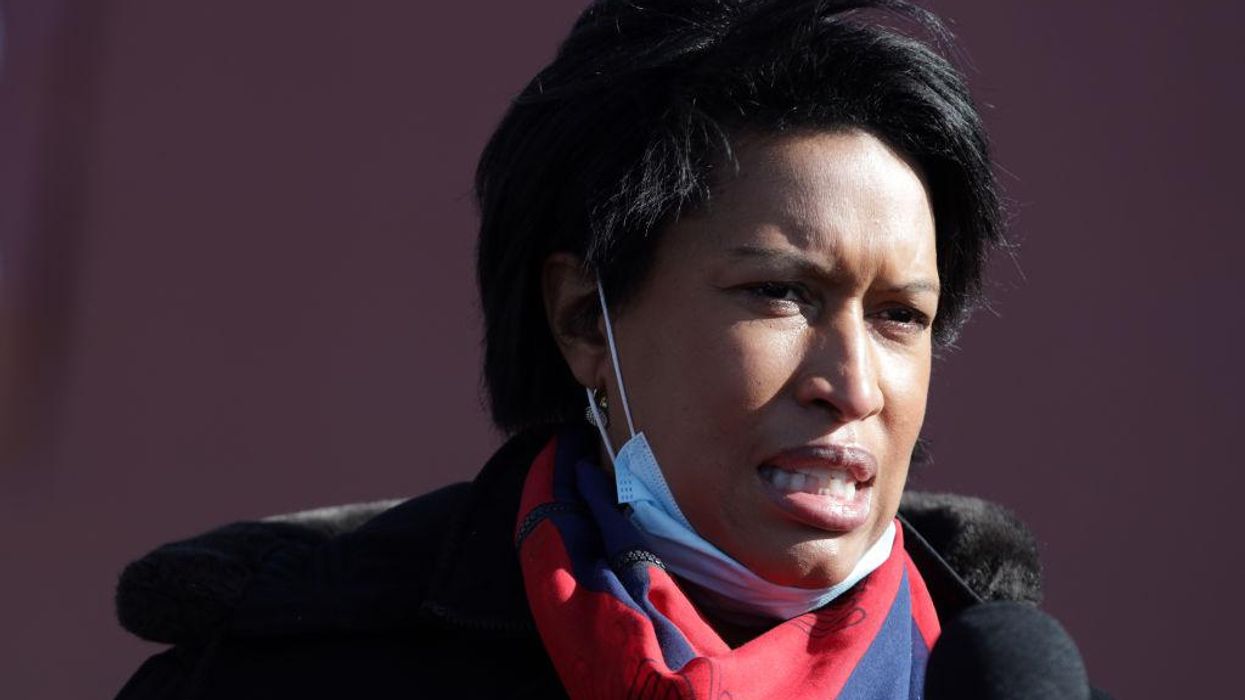 “The District of Columbia Government has not requested personnel from any other federal law enforcement agencies,” Bowser wrote to acting U.S. Attorney General Jeffrey Rosen, acting Secretary of Defense Chris Miller, and Secretary of the Army Ryan D. McCarthy on Tuesday.

She insisted that the Metropolitan Police Department was “prepared” to handle the demonstrations in cooperation with its federal partners, specifically the U.S. Park Police, U.S. Capitol Police and U.S. Secret Service.

“To be clear, the District of Columbia is not requesting other federal law enforcement personnel and discourages any additional deployment without immediate notification to, and consultation with, MPD if such plans are underway,” she continued.

She reasoned in the letter that the presence of “unidentified” federal agents “caused confusion” during demonstrations last year and could become a “national security threat” by leaving MPD with no way to decipher between armed groups.

Yet on Thursday, while speaking to reporters in the aftermath of the riots, Bowser bashed federal law enforcement for their supposed lackluster response. She accused federal personnel of responding more forcefully to Black Lives Matter protests in the city last summer than they did to Wednesday’s violence.

“We must also understand why the federal law enforcement response was much stronger [during the Black Lives Matter protests], Bowser said, according to CBS News.

During the conference, she also criticized Capitol Police — the specific agency charged with protecting the U.S. Congress — for failing to prevent hundreds of protesters from tearing down security barricades and ultimately pushing into the Capitol building. The pandemonium ended up resulting in shots being fired and one rioter being killed.

“Obviously it was a failure or you would not have had police lines breached and people entering the building by breaking windows,” she said.

As the events unfolded Wednesday afternoon it quickly became clear that law enforcement were outmanned and under-equipped to handle the escalating situation, leading to President Trump eventually sending in the National Guard to quell the violence and secure the Capitol.

It should be noted that Bowser’s letter was a request and not a directive. Nor does she have authority of federal partners such as the Capitol Police. 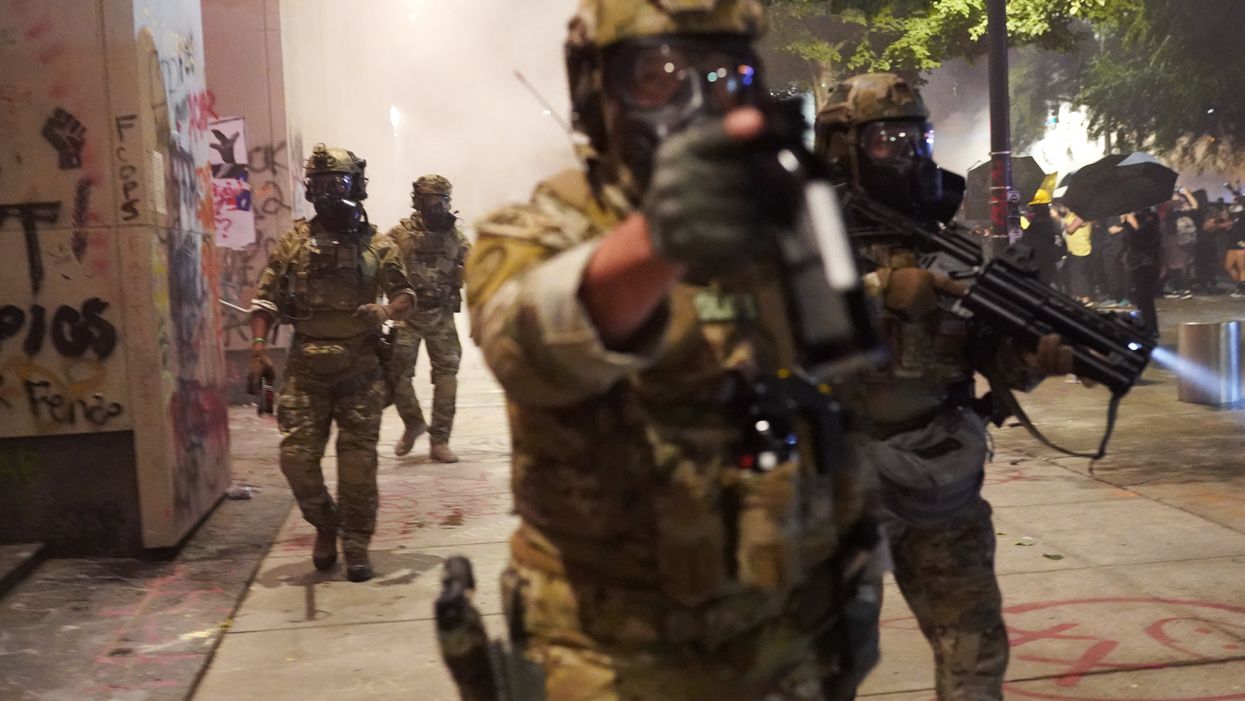 U.S. District Court Judge Michael Simon says he is mulling over whether he will require federal officers in the Portland, Oregon, area to wear large identifying numbers on so that people can identify them easier in cases of excessive force.

The jerseys would be similar to that worn by team sports players.

According to Politico, Simon on Friday told attorneys that he believes the move would be “appropriate”

“I do think it might be appropriate to require any federal law enforcement officer who steps out of the federal courthouse building to wear a unique identifying code,” he reportedly said during the teleconference. “I’m taking this very, very seriously.”

Simon issued the remarks following news of the lawsuit involving accusations against federal law enforcement officials using excessive force during Portland riots. Simon is overseeing the suit, which was filed by the American Civil Liberties Union.

The suit, according to the outlet, “accuses city police and federal law enforcement officers of unjustifiable use of force against journalists and legal observers monitoring the protests.”

Simon said he believed the notion could be a good one so that people could pinpoint which officers might be guilty of abuse without being able to dox the federal officer in question.

In response to the suit, Simon issued a temporary restraining order in late July preventing officers from using force against anyone they reasonably believe to be a member of the media or a “legal observer.”

Simon said that evidence existed finding that people were “abusing the privileges” he permitted to the press in his order.

“There may be some people wearing ‘press’ on their clothing and they’re engaging in unlawful acts,” he said.

Simon also noted that he doesn’t want any violence period.

“If [federal officials are] needed, they will deployed at a moment’s notice,” Simon added. “If no one has to leave the building, no one has to put on jerseys that have unique identifying codes.”

The order runs through Thursday.

‘A very deliberate and intentional violation’

Matthew Borden, an attorney working with the ACLU, said, “We haven’t had a situation where any officer has been injured by someone marked press or that they’ve meaningfully interfered with officers doing their jobs. What we’ve been talking about in our contempt motion is a very deliberate and intentional violation of the injunction.”

Borden also said that federal officers need to be put in check because he also worries that someone may end up dead.