Close-up satellite ‘before and after’ photos have been produced by Planet Labs Inc., and republished by CNN, of Tuesday afternoon’s enormous explosion centered on the Beirut port.

The images confirm every building at the vital port, through which the majority of commerce and staples, including the nation’s grain supply comes, has been utterly destroyed.

A huge crater can be seen at the center of the leveled port, as CNN explains:

The diameter of the Beirut crater created by Tuesday’s explosion appears to be roughly 124 meters — or about 405 feet, according to a CNN analysis of a Planet Labs, Inc. satellite image.

That distance means the crater is well over a football field in length.

Another angle — before and after:

The shockwave from the blast, which Lebanese officials now estimate left between three and five billion dollars worth of damage, resulted in damage to homes up to miles away from the blast site.

Hundreds of thousands are reported to be essentially homeless, given entire walls were ripped off residential buildings up to a mile away, with windows shattered multiple miles away.

Before and after images from the #explosion that happened in #Beirut, #Lebanon on August 4, 2020. Before image from June 2020 and after image from today, August 5, 2020. More imagery showing the devastation will follow. pic.twitter.com/dfj4ItyTXL

Close-up view from the port toward the downtown Beirut area:

“In my life, I haven’t seen destruction on this scale,” he said.

Before and after SkySat imagery shows the impact of yesterday’s explosion in Beirut.

Thankfully, the couple was unharmed after fleeing for cover along with the cameraman. They were later able to continue the wedding, though badly shaken by the ordeal.

In another terrifying instance, a BBC interview was in progress, when the BBC Arabic corresponded appeared to be thrown from her chair amid flying debris and screams:

And watch as a Maronite Catholic priest was serving mass the minute the blast went off.

The worship event was being live-streamed, and was reported as being offered for the healing of coronavirus patients:

Chunks of the church’s roof are seen falling as the priest dashes from the altar and tries to dive for cover.

Lebanese rescue services are reportedly still digging through rubble, looking for survivors or in some cases the deceased.

The official death toll has risen to at least 135, with over 5,000 injured, but the number is expected to climb as more of the rubble is removed. Families are still searching for loved ones reported missing in the wake of the tragedy. 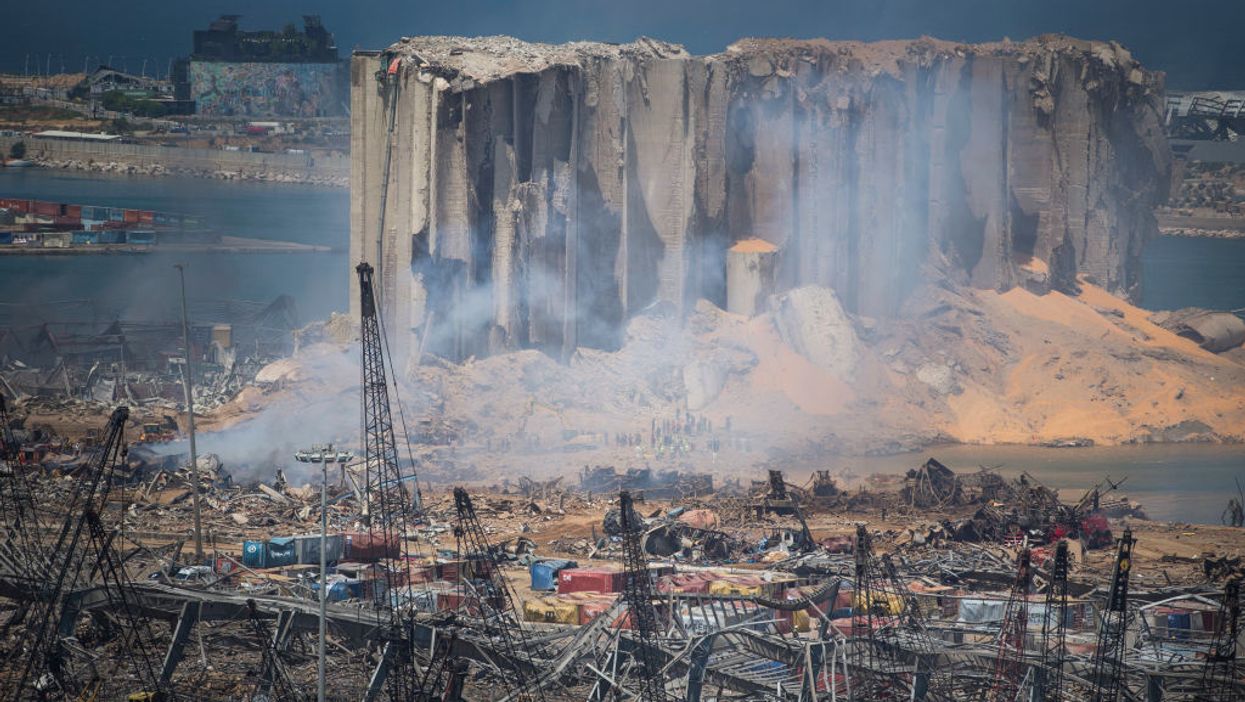 The official death toll in the massive explosion that rocked Beirut on Tuesday has risen to 135 as of the time of this article; however, Lebanese authorities warn that the final toll could be much higher as the search continues for hundreds who are still missing after the devastating blast.

The true extent of the devastation in the Lebanese capital is just beginning to come to light 24 hours after videos and pictures of the explosion rocked the world. Buildings have been damaged for miles around and a large, gaping crater at the explosion site can be seen on satellite footage.

Lebanon does not conduct a regular census of its cities’ populations, but most estimates place the number of people living in and around Beirut at between 1 million and 2 million people. The damage is so extensive that Beirut’s governor estimates that more than 300,000 people are currently homeless, and may remain so for several months as the city attempts to piece itself back together. 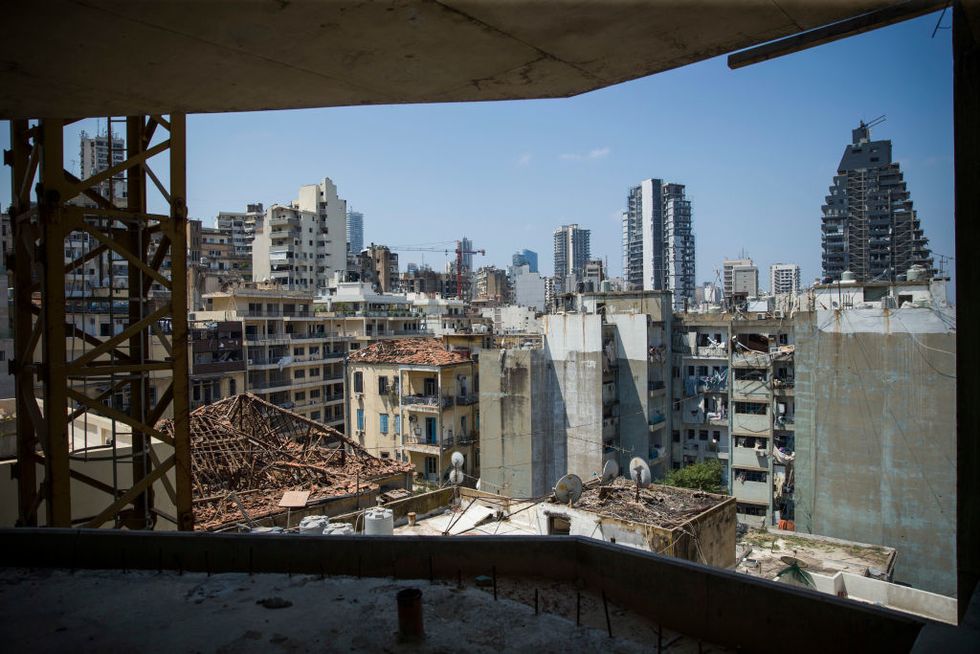 Destroyed rooftops and facades are visible from a high-rise building a day after a massive explosion occurred at the port on Aug. 5, 2020 in Beirut, Lebanon. (Photo by Marwah Tatah/Getty Images)

According to The Telegraph, the city’s hospitals are already overwhelmed with over 5,000 who were injured in the blast, even as workers continue to search through the rubble searching for more wounded survivors. Many hospitals were also damaged in the blast, forcing them to evacuate existing patients outside for care.

Additionally, Fox News reported that over 85% of Lebanon’s food storage is housed in Beirut, and that damage to some structures may lead to widespread famine in the country in the absence of foreign aid, which is already arriving.

Although the investigation into the cause of the explosion is ongoing, the government claims that the explosion was likely caused when a container that was storing 2,700 tons of ammonium nitrate ignited on the dock at the port.

The chemical — which is used in fertilizer and was one of the primary components of the bomb constructed by Timothy McVeigh and his conspirators in the April 19, 1995, bombing of the Alfred P. Murrah Federal Building in Oklahoma City — had been seized by Lebanese authorities in 2014 and apparently left on the dock to sit since then. 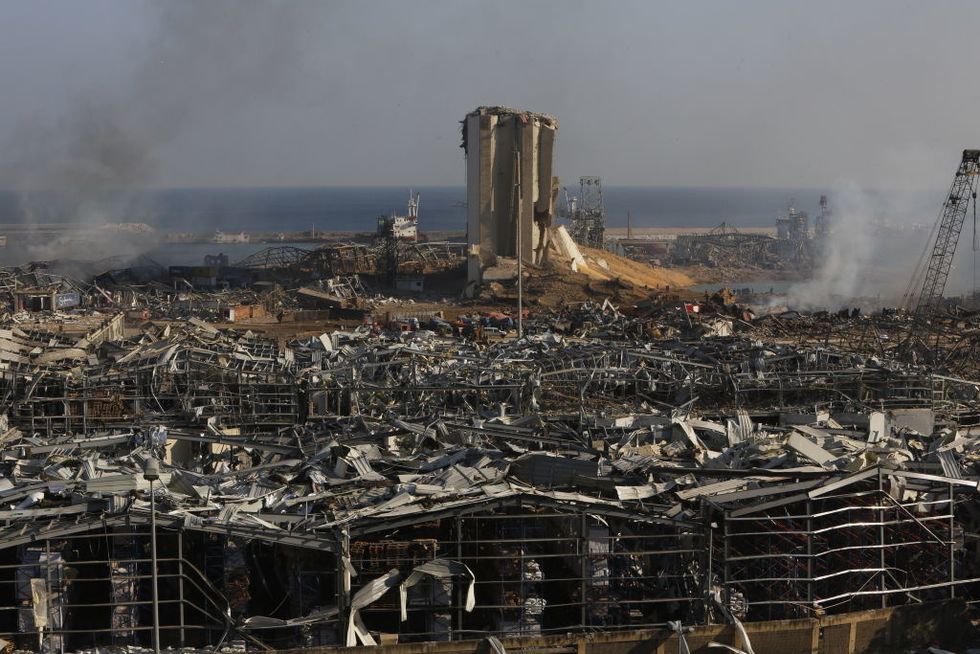 Buildings lie ruined near the city’s port, devastated by an explosion Tuesday in Beirut, Lebanon. (Photo by Marwan Tatah/Getty images)

By way of perspective, the total amount of all chemicals used by McVeigh in his bomb was less than four tons.

The Lebanese government has placed the port officials who were in charge of the dock where the explosion occurred under house arrest and promised a full and transparent investigation into the blast.

I have a rule, and that’s to never buy the first “official narrative” presented by any government or mainstream media. Especially when it comes to situations that have caused mass death or mass panic. So, is the official narrative of the Beirut, Lebanon explosion solid?

Probably not.  Nothing we are told is the truth anymore, so why on earth would the mainstream media and governments controlled by the banking cartel suddenly decide we deserve the real story? Plus, some things just don’t add up, much like the coronavirus scamdemic narrative.

For those who aren’t yet aware, a devastating explosion occurred at the port of Beirut that left over 70 people dead and thousands wounded. Even though videos of the explosion continue to emerge showing the immense destruction that was caused, there seems to be little explanation for what actually happened as the media brushes it off as a simple ammonium nitrate mishap.

The blast was reportedly heard as far away as Cyprus, some 150 miles away from the port, according to RT.  Despite the explanations supplied by Lebanese authorities, United States President Donald Trump apparently felt compelled to weigh in on the incident during a press conference Tuesday evening, suggesting that “based on the explosion,”  it was an “attack, it was a bomb of some kind” after consulting with Pentagon generals.

The official narrative says that “authorities” (people desperate to have you believe their narrative)  have traced the explosion to a 2,750-ton stash of explosive ammonium nitrate in a warehouse by the port (certainly not an Israeli missile, Lebanese and Israeli authorities, as well as Hezbollah, have stressed).

If the official story is true, then why would Trump suggest it was an “attack?” Did he just misspeak? If it was an attack, why are others saying it’s just a storage mishap? The almost want attention diverted. Why? Things aren’t adding up already.  When something like this happens, it’s important to pay attention and be aware of it. 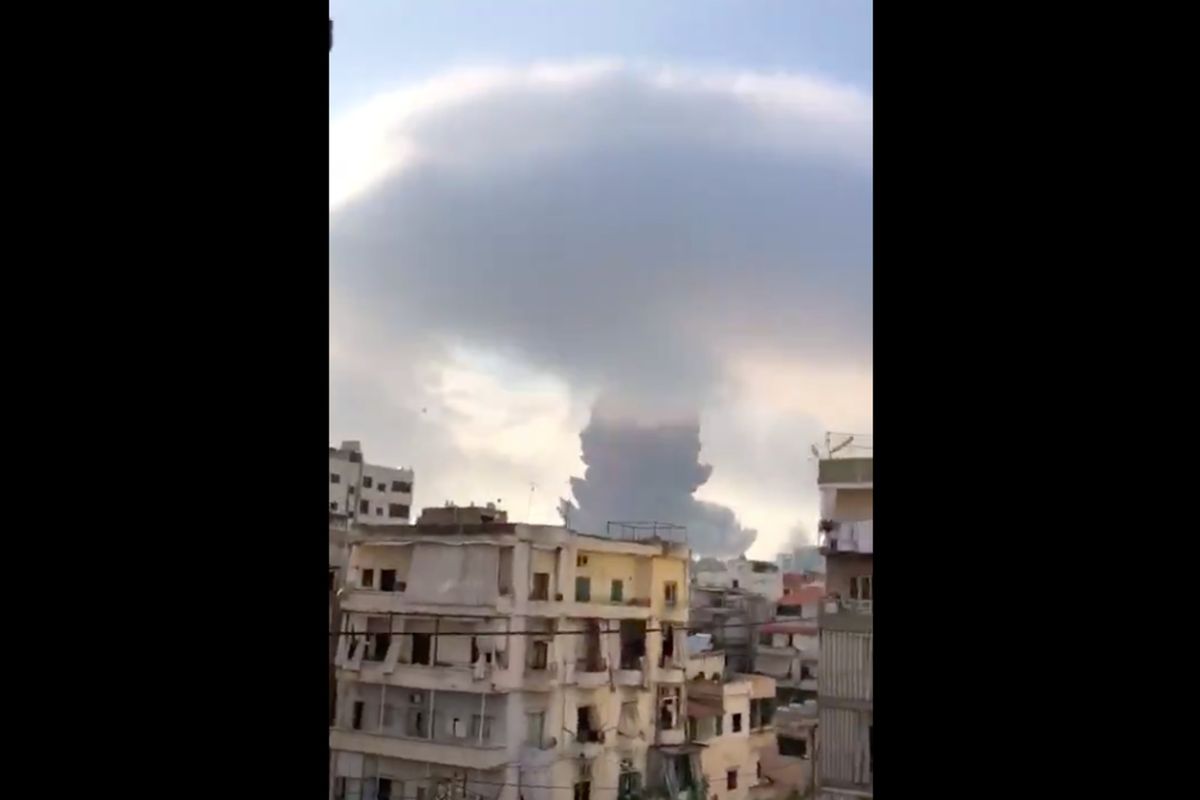 A major explosion in Lebanon’s capital of Beirut shattered windows and rocked buildings for hundreds of feet, according to reports.

Disclose shared a video on Twitter,
captioning it, “Massive explosion in Beirut. Al-Mayadeen reports the explosion in Beirut is not an act of terrorism according to preliminary information. But holy moly … what is the cause of something like this?!”

The outlet also
reported “VERY HIGH number of casualties reported by the Lebanon health minister as a result of the explosion in Beirut (Sky News).”

The explosion took place Tuesday, according to
The Guardian, and its source is not clear at the time of this writing.

The outlet reports that the explosion “rocked central Beirut” and “shattered windows, knocked down doors, and shook buildings several hundred feet away.”

“An enormous cloud of smoke could be seen from across the city and witnesses said there were reports of a fire and several small explosions at the port preceded the large blast after 6pm on Tuesday,” the outlet continued.

The BBC reported that there were several explosions — one smaller one following the massive blow that shook buildings for blocks.

The outlet reported on “unconfirmed reports” of a second blast, and points out that “A UN tribunal is due to issue its verdict in the trial of four suspects in the murder by car bomb of [Lebanon ex-PM Rafic Baha El Deen Al ]Hariri.”

The four suspects are reportedly members of Iranian-backed Hezbollah group.

Reports have emerged that the possible second explosion reportedly took place at the Hariri residence in Beirut.

The verdict is due on Friday.

A large explosion has been heard in the Lebanese capital Beirut, with thick smoke billowing from the city centre

Local state-run media report that the explosion source was a “major fire at a warehouse for firecrackers near the port.” The report said large numbers of people were wounded.

CNN reported that “[m]any buildings were damaged by the explosion, including the headquarters of … Hariri.”

Eyewitnesses also say that residences as far as 10 kilometers away were damaged due to the blast.

Reports are also emerging about a “significant internet outage” following the blast. 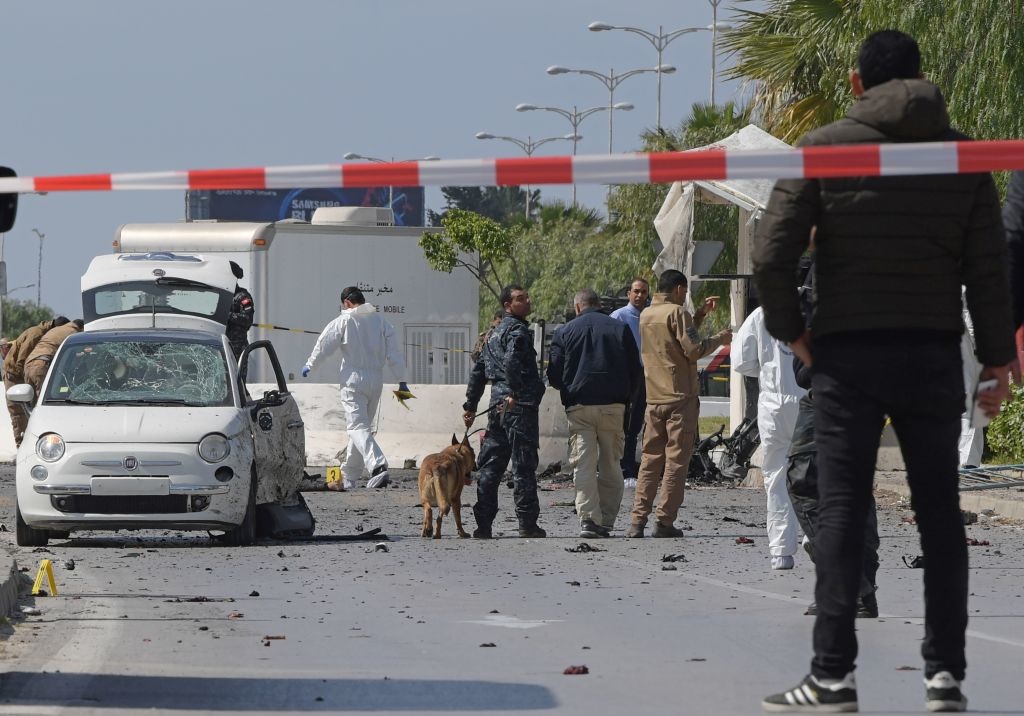 Two suicide bombers set off an explosion near the United States Embassy in the capital city of Tunisia Friday, killing one police officer and wounding several more.

The bombers reportedly drove up to the embassy building on a motorcycle at around 11 a.m. local time. They approached the police patrol near the embassy as if to ask questions before they detonated the bomb.

The two bombers were killed in the explosion along with one police officer. Five more have been wounded, including four officers and one civilian, officials confirmed shortly after the attack.

No group has claimed responsibility for the attack as of yet.

The U.S. Embassy confirmed the attack in Tunis on Twitter and said that emergency personnel are responding to the incident.

A local photographer posted pictures of the attack’s aftermath on Twitter, showing the police patrol vehicle destroyed and debris cluttering the street. But the accuracy of the images cannot be confirmed.

Tunisia was the birthplace of the Arab Spiring uprisings in 2011 and in recent years has been the target of numerous Islamic extremist attacks.

But the New York Times is calling the suicide bombing on Friday the most serious attack to hit the country in recent months.