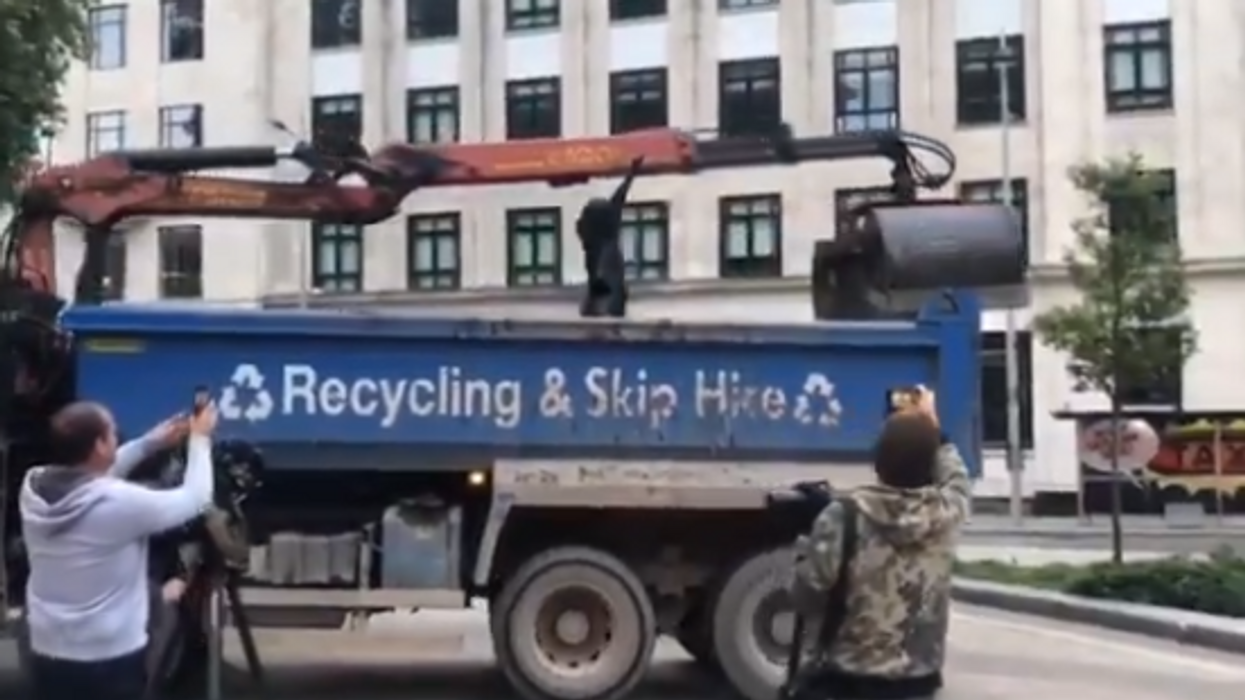 A statue dedicated to a British Black Lives Matter activist was installed on a plinth in the U.K. that was once occupied by a statue of a wealthy merchant trader who was involved in the slave trade. However, within 24 hours, the Black Lives Matter sculpture was taken down.

During a protest on June 7 in the city of Bristol in southwest England, vandals tore down a statue of Edward Colston. He was a 17th-century member of Parliament, philanthropist, and merchant involved in the transatlantic slave trade. In the wake of the George Floyd protests, rioters toppled the 125-year-old statue of Colston and dumped it into the harbor.

On Wednesday, a new statue was raised on the pedestal where Colston’s monument once stood. The new statue was a tribute to Jen Reid, a Bristol-based Black Lives Matter activist. The life-size black resin and steel sculpture of the BLM protester was created by British artist Marc Quinn, who titled the artwork “A Surge of Power (Jen Reid) 2020.”

On Thursday, Reid’s statue was removed by Bristol City Council contractors within 24 hours of being erected.

“I prefer to say we’re not taking down the statue of a Black Lives Matter protester, we are taking down the work of a London-based artist who erected it without permission and without any conversation with the city,” Rees told Sky News.

Rees previously called the Colston statue “an affront,” but added that he did not approve of how the statue was torn down.

“As an elected politician, obviously I cannot condone the damage and I am very concerned about the implications of a mass gathering on the possibility of a second COVID wave,” Rees said.

“I can’t and won’t pretend the statue of a slave trader in a city I was born and grew up in wasn’t an affront to me and people like me,” said Rees, who is black. “People in Bristol who don’t want that statue in the middle of the city came together and it is my job to unite, hear those voices and hold those truths together for people for who that statue is a personal affront.”

“The future of the plinth and what is installed on it must be decided by the people of Bristol,” Rees tweeted.

“This will be critical to building a city that is home to those who are elated at the statue being pulled down, those who sympathize with its removal but are dismayed at how it happened and those who feel that in its removal, they’ve lost a piece of the Bristol they know and therefore themselves,” Rees added. “We need change. In leading that change we have to find a pace that brings people with us.”

Rees revealed that a commission of historians would help decide on what the new monument will be, and the replacement will tell “the full story of Bristol so that the city is much more informed and is in a better position to collectively decide who it wants to honor and where.”

The Bristol City Council said the statue of Reid “will be held at our museum for the artist to collect or donate to our collection.”

Quinn said that if the Black Lives Matter statue is sold, the proceeds will be donated to two charities promoting Black history that were chosen by Reid.

The Colston statue was fished out of the harbor. City officials say it will be exhibited at a museum, along with placards from the Black Lives Matter protest.