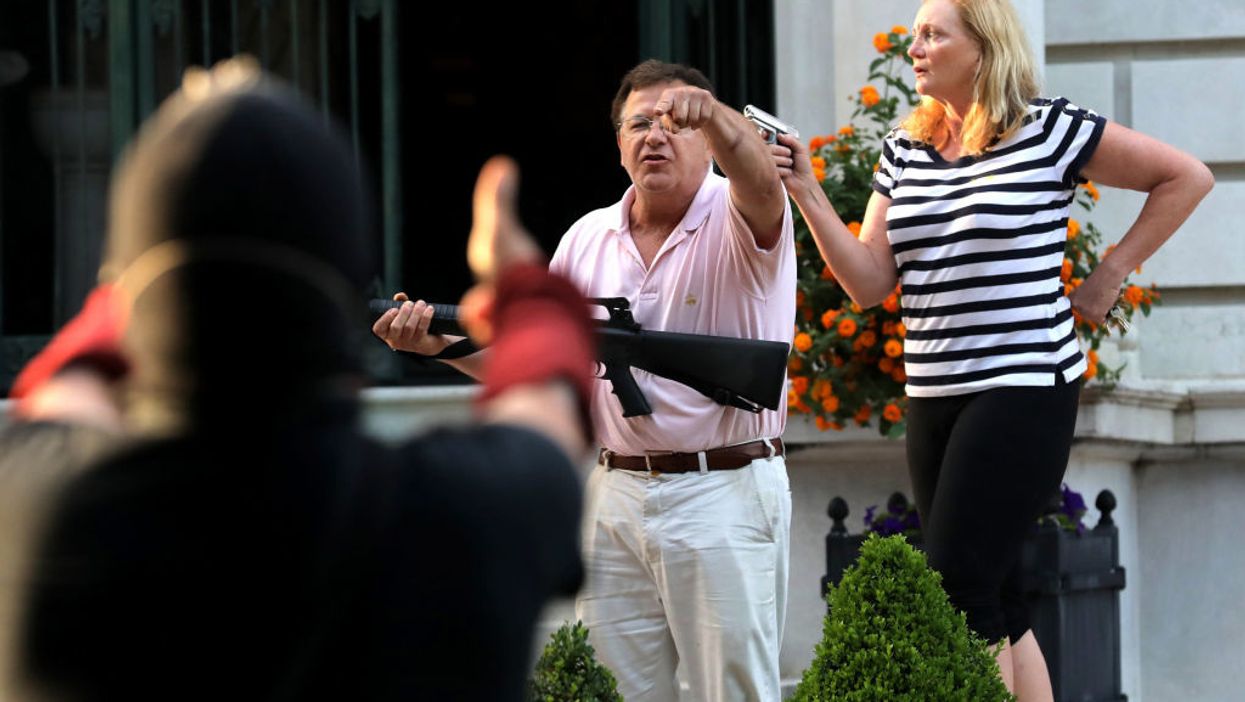 The governor of Missouri does not expect the armed St. Louis couple who defended their home to go to jail, and he would be willing to pardon them if it came down to it.

Mark and Patricia McCloskey garnered internet fame, condemnation, and praise after photos and videos of them defending their home went viral. Approximately 500 protesters marched into a gated community in the wealthy Central West End neighborhood on June 28. The two St. Louis attorneys were prepared to protect their mansion and were caught on camera wielding guns.

St. Louis police served a search warrant on lawyers the McCloskeys earlier this month. Police confiscated the couple’s firearms that they were armed with during the tense encounter with demonstrators in June – an AR-15 rifle and a handgun.

St. Louis Circuit Attorney Kim Gardner, the prosecutor who is handling the case, said, “We must protect the right to peacefully protest, and any attempt to chill it through intimidation or threat of deadly force will not be tolerated.”

While there have yet to be charges filed against the couple, Missouri Gov. Mike Parson (R) said he would pardon the McCloskeys if they are charged for brandishing firearms at a group of protesters outside their home.

Parson made the revelation on Friday during an appearance on “The Marc Cox Morning Show” on 97.1 FM in St. Louis. Parson said the McCloskeys “did what they legally should do” in protecting their property.

“A mob does not have the right to charge your property,” Parson stated. “They had every right to protect themselves.”

When asked if he would pardon the St. Louis couple if charges were filled, Parsons replied, “I think that’s exactly what would happen,” according to The Hill.

“Right now, that’s what I feel,” he added. “You don’t know until you hear all the facts. But right now, if this is all about going after them for doing a lawful act, then yeah, if that scenario ever happened, I don’t think they’re going to spend any time in jail.”

Parson wrote on Twitter: “We will not allow law-abiding citizens to be targeted for exercising their constitutional rights.”

Parson, along with President Donald Trump and Sen. Josh Hawley (R-Mo.), have all criticized Gardner’s investigation into the couple. President Trump called the investigation of the McCloskeys a “disgrace.”

Hawley called for an investigation into the St. Louis Circuit Attorney’s Office.

“This is an unacceptable abuse of power and threat to the Second Amendment,” read a letter from Hawley to U.S. Attorney General William Barr. “I urge you to consider a federal civil rights investigation into the St. Louis Circuit Attorney’s Office to determine whether this investigation and impending prosecution violates this family’s constitutional right.”

“Under Missouri law, under the Castle Doctrine, an individual has really expansive authority to protect their own lives, their home, and their property. I think the story here to watch here is the local prosecutor, Kim Gardner,” Schmitt said in a Fox News interview.

“Kim Gardner has an abysmal record in prosecuting violent crime, has recently released and been complicit in the release of dozens and dozens of inmates who have been charged with violent crimes, and has a record of making politically motivated decisions not based on the law,” Schmitt added. “So, this is certainly something to watch.”