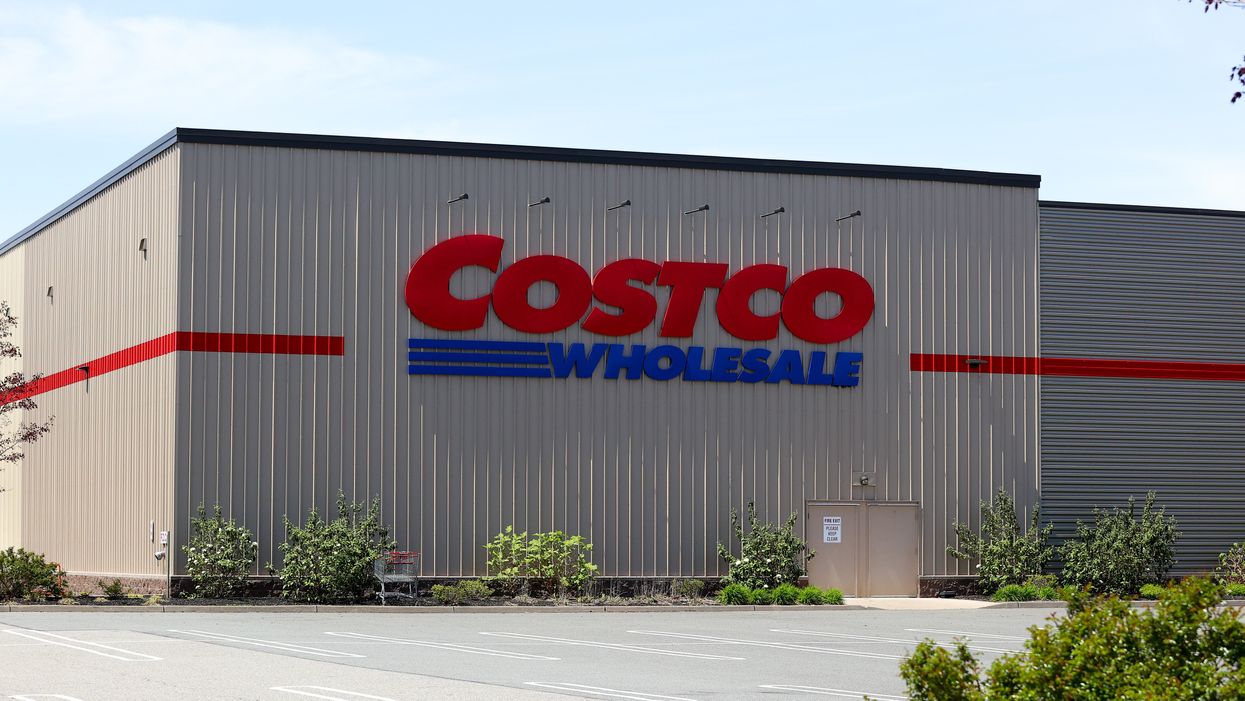 People for the Ethical Treatment of Animals has been urging retailers to pull products from manufacturers in Thailand who practice monkey labor.

In this clip, Pat and the guys discussed that, since 2019, PETA’s investigation allegedly found animal abuse on every monkey plantation.

According to USA Today, one of the brands removed from Costco is Chaokoh, made by Theppadungporn Coconut Co. Ltd, which is one of the largest manufacturers of coconut products.

“No kind shopper wants monkeys to be chained up and treated like coconut-picking machines,” PETA President Ingrid Newkirk stated. “Costco made the right call to reject animal exploitation, and PETA is calling on holdouts like Kroger to follow suit.”

“What really drives this change is retailers not supporting the product, and of course, customers not buying the product. Costco is a major player that should have an impact,” Stein said.

“See, we want coconut milk, but we don’t care how we get it,” Pat said with sarcasm.

Watch the clip for more details. 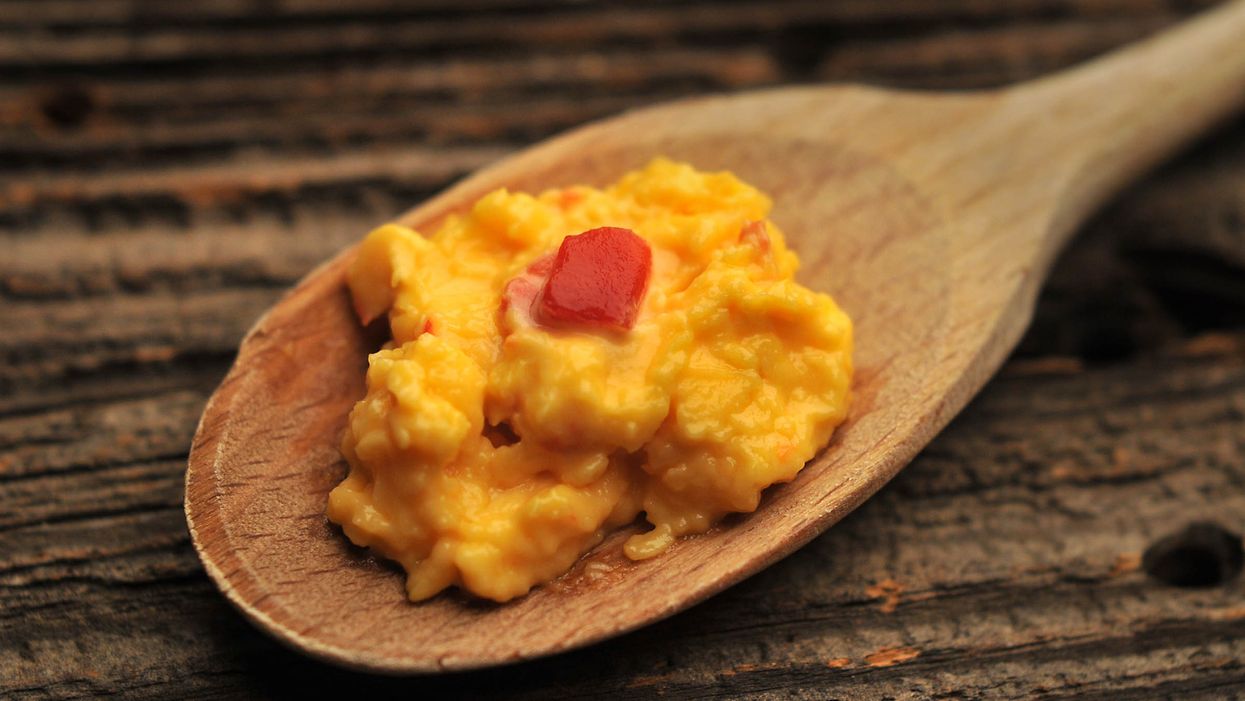 Henry, who is also mayor of Pawleys Island, South Carolina, made the remarks in a since-deleted Aug. 25 Facebook post that prompted many people on social media to call for a boycott of the company.

According to NBC’s “Today,” a Costco store announced the company had removed the cheese items in question from at least 120 stores as prompted by Henry’s remarks.

Henry’s remarks were purported to be in response to the news of a murder of two residents in Georgetown, South Carolina.

The Facebook read, “I am sickened by the senseless killings in Georgetown last night. 2 innocent people murdered. Not 2 thugs or people wanted on multiple warrants. 2 white people defenselessly gunned down by a black man. So why do we stand by and allow BLM to lawlessly destroy great American cities and threaten their citizens on a daily basis … this has gone on too long. Rise up America. This BLM and Antifa movement must be treated like the terror organizations they are.”

The outlet pointed to a release from the Georgetown County Sheriff’s Office, which detailed the incident.

Henry, in the post, apparently referred to 23-year-old Ty Sheem Ha Sheem Walters III, who was arrested the day before Henry’s viral post after reportedly shooting three people and killing two others following a car accident that day.

In a store sign announcement following social media outcry, a Costco franchise wrote, “Over 120 Costco’s [sic] throughout the US are no longer carrying this item.”

The sign also read, “The *(asterisk) on this sign means that these 2 items are discontinued and will not be re-ordered by Costco.”

Several outlets — including “Today” — reportedly reached out to the company to confirm the decision, but the company refused to provide comment.

A popular pimento cheese brand will no longer be carried at 120 Costco Wholesale locations nationwide.

On Sept. 3, Henry issued an apology during a news conference.

“I am profoundly sorry to those I offended with my post last week,” he said in his remarks. “My comments were hurtful and insensitive. I spent that past 10 days listening and learning. The conversations I’ve had with friends, our staff, the community and faith-based leaders provided me with a deeper understanding of racial inequality and the importance of diversity sensitivity, which is very much needed to heal Pawleys Island, Georgetown and our country.”

“When two white people were allegedly killed by a black man in Georgetown, SC, Mayor Brian Henry of the neighboring town of Pawley’s [sic] Island Beach had the opportunity to bring citizens closer together,” the statement read. “He instead chose to use his platform to cause further racial divide and controversy by venting his frustrations on social media.”

In a statement to “Today,” Neal said, “Mayor Henry used the power and privilege afforded to his office to further his personal agenda and spread hateful, racist rhetoric with the potential of inciting violence. These situations must be taken seriously. Racism cannot and will not be tolerated by the citizens of Pawley’s [sic] Island Beach and Georgetown County, SC. Mayor Henry’s actions reflected negatively upon himself and the community in which he serves.” 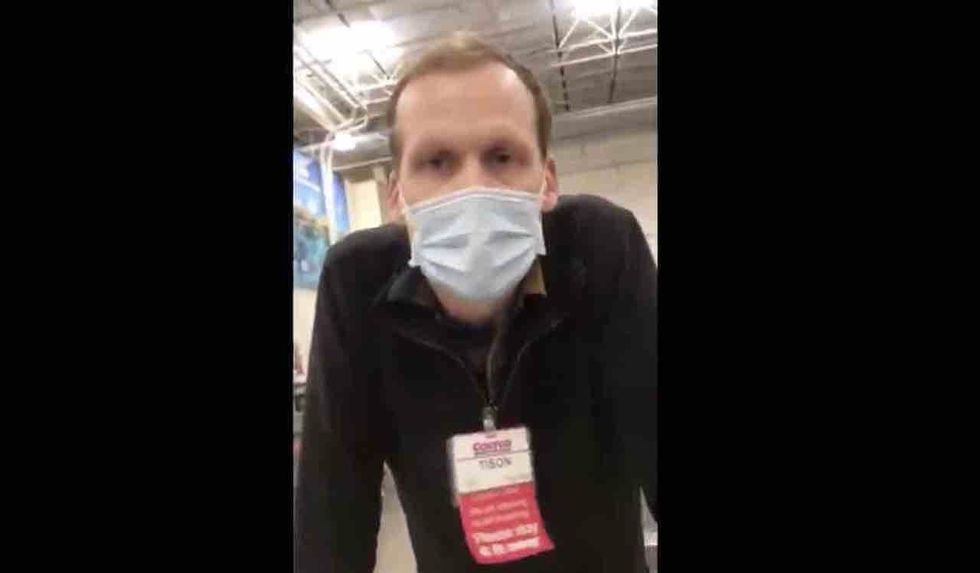 A Costco employee is getting a landslide of praise from Twitter users after he was caught on video telling off a customer who refused to wear a mask in the store.

After the customer threatens to post cellphone video of the confrontation on Instagram, the employee — whose badge identifies him as “Tison” — welcomes the conflict and reads him the riot act.

“Hi everyone!” Tison says, waving at the camera. “I work for Costco, and I’m asking this member to put on a mask because that is our company policy.”

The customer then turns the camera to his mask-free face and says, “And I’m not doing it ’cause I woke up in a free country.” 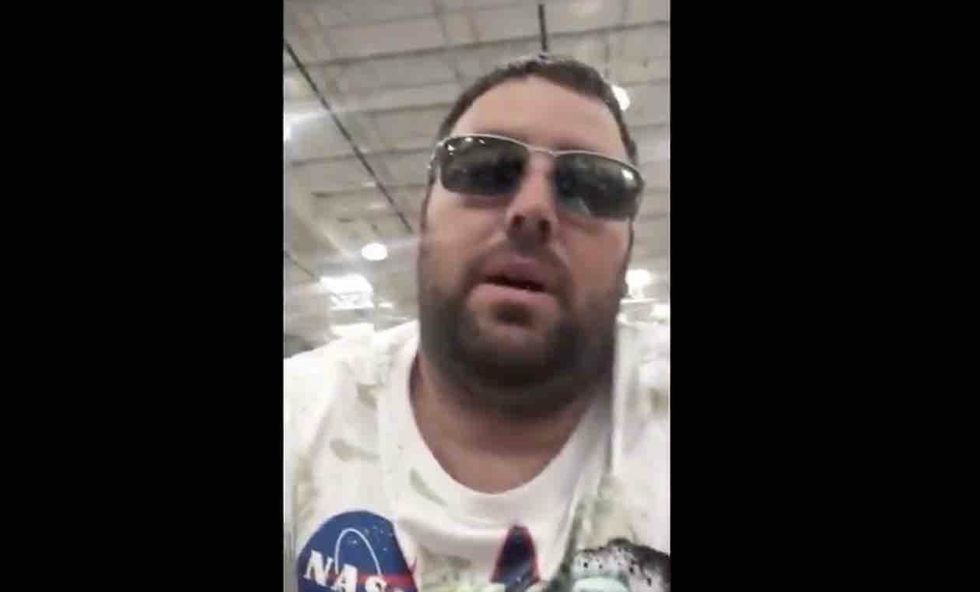 With that Tison takes the customer’s cart away: “Sir, have a great day. You are no longer welcome here in our warehouse. You need to leave. Thank you very much.” 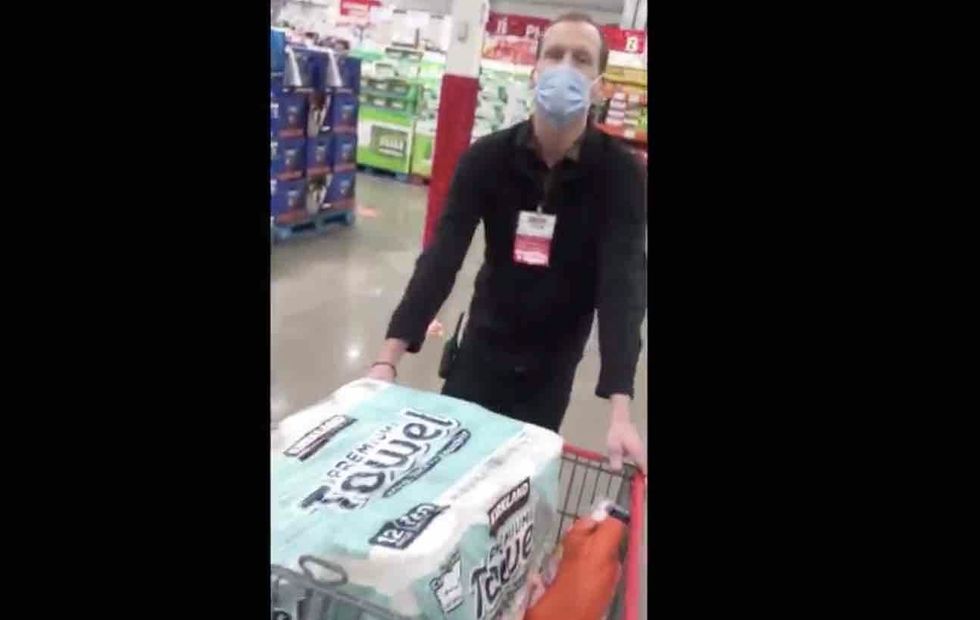 The customer finishes the clip by calling Tison a “pu**y little b***h” and saying, “There he is walking away with all my stuff. There he goes. ‘Cuz I’m not a f***in’ sheep.”

How are folks responding?

The clip James posted has been getting a ton of attention, and it appears comments are decidedly in favor of the Costco employee.

Outspoken
far-left U.S. Rep. Ted Lieu (D-Calif.) commented that Costco “has the right to require that customers wear a mask. Businesses have the right to prevent people from spewing saliva droplets in their stores. Because we live in a free country. And because there’s a frickin’ life-threatening virus that’s spread through saliva droplets.”

Who is that masked man?

Tison revealed himself on Twitter in the aftermath, basking in the adoration:

“Thank you Tison & #costco! You won the ‘who’s balls are bigger’ contest by a landslide,” one user wrote. “You also potentially saved my life or anybody else’s in there. We appreciate you. @Costco give this man a raise! And give the free country plump ‘man’ a big wet cough.”

“You were BADA$ in how you handled the giant dou*hebag,” another user wrote. “You never lost your cool while stating Costco’s position. Thank you for protecting Costco guests and your co-workers with class & sass.”

“You are a freaking rock star!” another user wrote. “Keep up the great work!”

“Fabulous and professional! You handled that man like a badass!” another user said. “Love #Costco!”

The man whose shopping cart taken created a video response to the Costco altercation, which
Mediaite said was deleted from Reddit — but the clip lived on elsewhere.

“I’ve got every f***ing right to not wear a mask anywhere because this isn’t about wearing a mask, this is about control, OK?” the shirtless man says on the clip. “And I’m not the f***in’ sheep. Ya’ll are the f***in’ sheep, every single one of you, going along with what everybody else is saying. I was one of the only people in that store not wearing a mask, which means that you’re protected from me, and I’m protected from you, OK? That dude was hoverin’ over me, he was stalkin’ me, he was f***in’ with me. I just took out my camera at that moment so I could show people how this guy was acting toward one person, OK? So if everyone else is wearing a mask, then one person should be able to fly, if anything.” 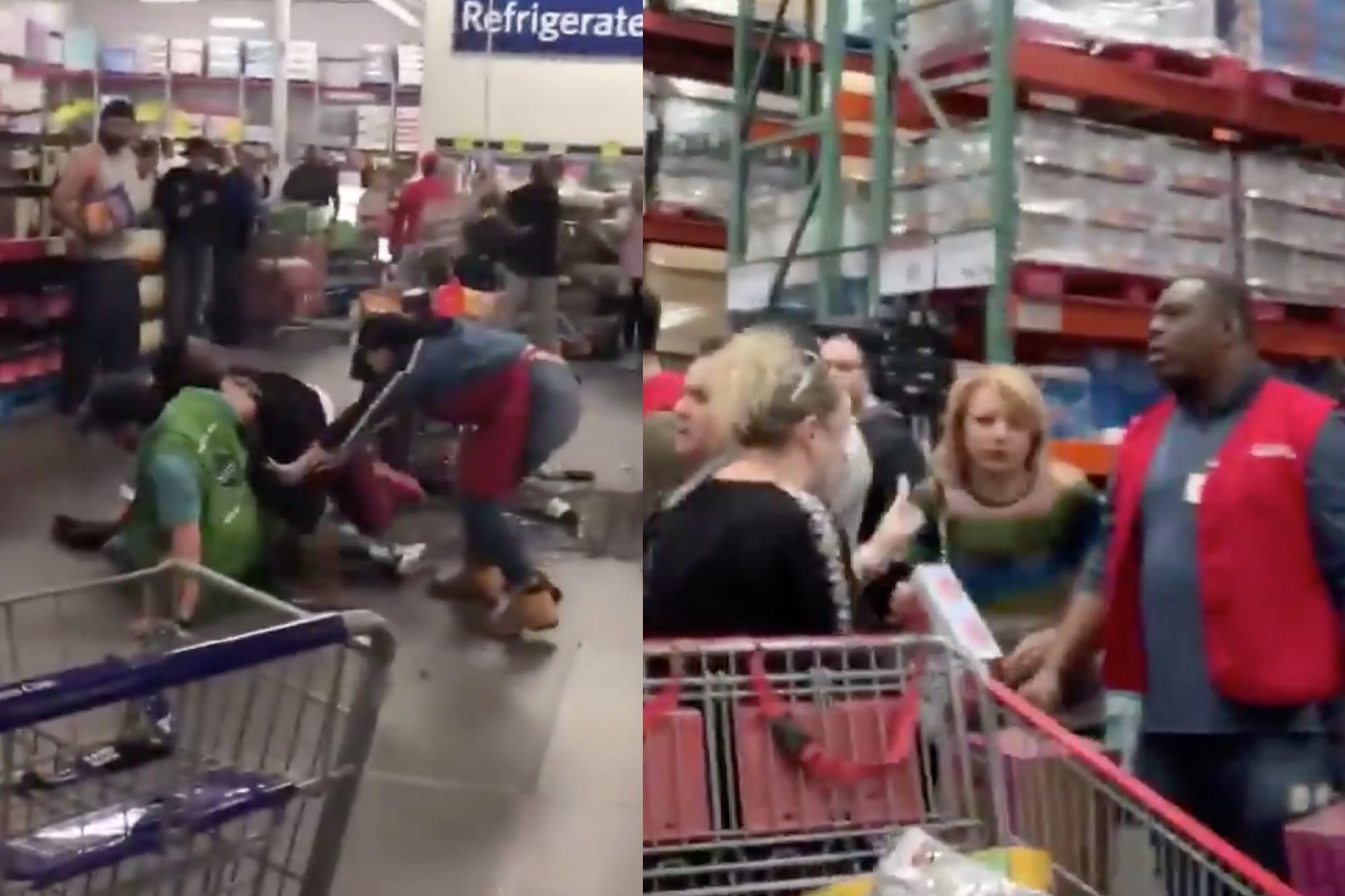 As the tension mounted over the spread of the coronavirus pandemic, some Americans broke out in brawls and fights at local big box grocery stores, and others broke out their cellphones to videotape those brawls.

In one video reportedly from Brooklyn, New York, two shoppers can be seen yelling at each other, with Costco employees trying to intervene.

One employee yells at the customers, “as human beings, we’ve got to come together at a time like this!” One of the participants in the altercation can be head saying, “don’t let her touch me with that cart!”

In another video reportedly from Hiram, Georgia, there is an all-out brawl at a Sam’s Club.

One man is seen at the end of the video being taken out on a gurney by paramedics. The poster claims one man was stabbed during the fight when both men grabbed wine bottles to attack each other.

According to WSB-TV in Atlanta, police say the altercation began when one man in a motorized shopping cart hit another family’s cart and a fight ensued. It escalated into a brawl later near the wine bottles. Police said that it was not a fight over supplies related to the coronavirus panic.

Other videos showed long lines as people stocked up on supplies in anticipation of quarantines:

President Donald Trump declared a national emergency over the pandemic on Friday, which cleared the way for more federal action to stop the spread of the virus.

Here’s more about the coronavirus pandemic: